Preview: It's four versus one in Turtle Rock's Evolve

Hunt or be hunted

Turtle Rock is best known for creating the Left 4 Dead franchise. The series was a big hit for Valve, and after a lot of tribulation over the years — everything from getting acquired, shut down, reformed, and losing their last publisher — the studio is back in partnership with 2K Games to offer another engaging cooperative experience in the form of Evolve.

Evolve sees four players taking on the role of human hunters, while another player is in control of a giant alien beast that gets stronger over the course of the match. This isn’t going to just be a straight up shooter, as teamwork and skills are key to winning a match.

Playing as the human hunters and the alien are totally unique experiences in Evolve. With the humans, everything is in first-person — essentially, imagine something akin to Team Fortress 2 in that each class is completely distinct with their respective weapons and abilities. Combining their different skills will be the most efficient way to take down the alien.

There’s four classes on the hunter side, and each player needs to play as either the Trapper, Medic, Support, and Assault roles (and if there’s not enough players you can go into matches with AI controlled characters) While there will be multiple characters you can pick from within each class that have their own unique weaponry and skill sets to take into a fight, there needs to be one of each class in a match. 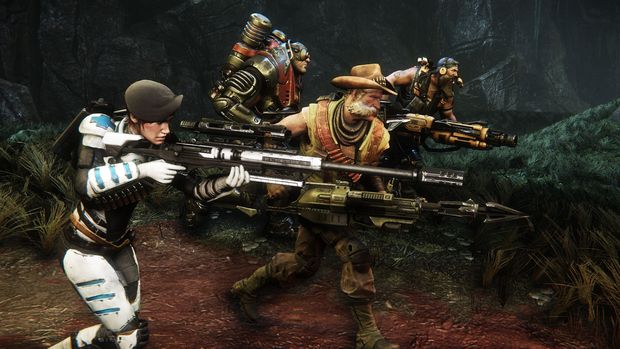 The Trapper we got to play as, for instance, can throw down a mobile arena, which places down a big bubble around the immediate surrounding area that prevents the monster from running away. Along with that the Trapper also had a big harpoon gun that could slow the monster down to a crawl.

Meanwhile, the Medic was able to use her dart gun to slow the monster down even further, and use her anti-material rifle to create weak points on the creature. The Medic can also heal other players by either launching a cloud of health that recovers anyone within the area, or using a healing gun, Team Fortress 2 style.

While the monster is slowed down, the Support class could call in an orbital strike to drop some heavy fire right on the beast. And if it attacks other players, the Support class can apply a shield to his teammates as needed, but he does lose any offensive capabilities while shielding allies.

Finally the Assault player can just fire away with his high-powered weaponry and mines. We only saw one character from each class in this hands-on preview, and it’ll be interesting to see just how many more playable characters will be on offer. I can’t even begin to imagine how difficult it’s been to get the balancing right. 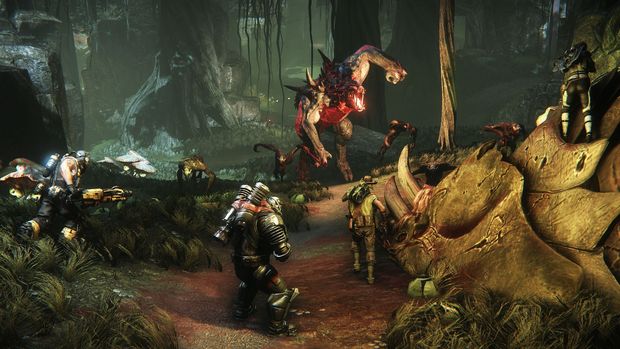 Each class brings something unique to the table, and lone wolfing it through the huge levels won’t cut it at all. You’ll want to stick together, communicate, and really pay attention to all the visual clues to track the monster down. All players also have a jetpack that will give a lot of air time to help you climb up cliffs and the like, plus it’ll give you short speed bursts that help to evade attacks.

Players can get knocked down into a last stand, and if they’re not revived in time they will bleed out and die. A countdown timer set at two-minutes will then begin, and so long as at least one hunter remains all dead players will be revived and get to drop back into the match. 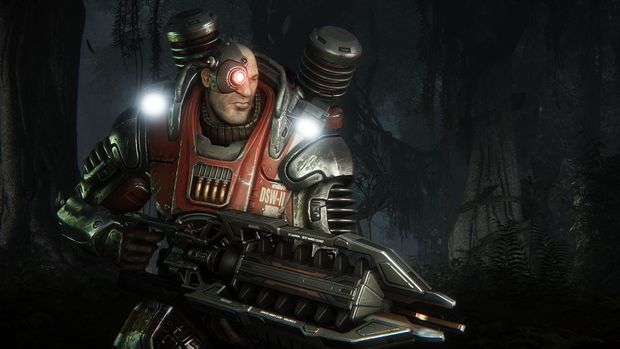 Then there’s the monster. In this case, we got to play as the Goliath, a giant monstrous ape-like creature with the action taking place in third-person view. There will be multiple playable monsters as well, and at first you’re pretty damn weak in terms of power and skills. You have a small head start as the monster, and you need to gain some distance as fast as possible between yourself and the hunters.

Running means you’ll leave footprints, and you can also startle flocks of birds that will give away your position to the hunters. You can sneak your way around, which means you won’t leave any foot prints, but you can’t help but to run away as fast as possible when you first start out.

The overall goal is for one side to kill the other completely, but with the monster you’re also trying to feast on the wildlife in order to evolve into your next stronger form. You have to kill wildlife first, and then it takes a little bit to eat their corpses. Once you’ve filled up the appropriate meter, you’ll then need to find a safe spot and enter a cocoon state to enter your next state. 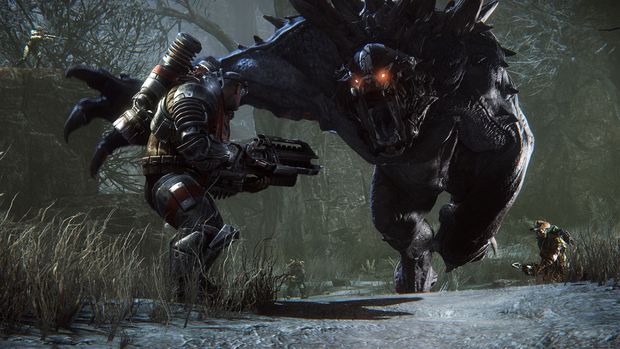 Before starting off a match you can pick between a charge attack, leap attack, fire breath ability, and rock throw attack, and this is on top of your standard melee attack too. You can pick between two abilities at first, and with each evolution you can pick an additional attack along with a new perk such as faster eating or improved armor. You also grow in size and overall power with each evolution. It wasn’t until my final stage three form that I felt comfortable engaging the hunters head-on instead of running and hiding.

Yet even then it was such a goddamn thrill fighting four other players. Even at my stronger form, it’s still a challenge taking on other human players as the tides can turn so quickly. My heart was seriously racing by the end of the match while playing as the Goliath — there’s just so much you have to be aware of. You can’t spam the same attack as it’ll be weakened, so you have to jump between all your abilities. And if things aren’t working out, you can always run the hell away. 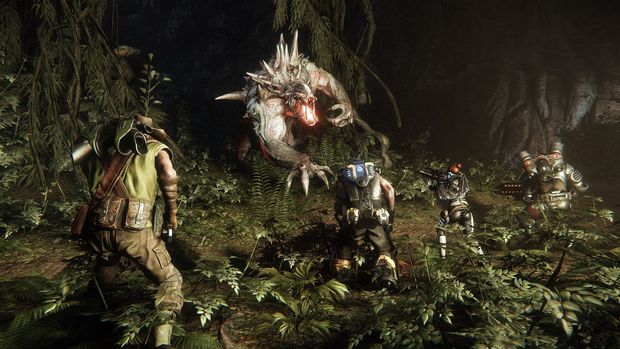 This was all in the game’s Hunt mode, essentially the core mode that best defines the Evolve experience. We only got to check out one map, a huge jungle with a big factor at the end. There’s a ton of verticality, and you can go anywhere on the map while on the hunt.

Maps are filled with dangers too, everything from giant man-eating venus flytraps, to creatures that are even bigger than the Goliath. A good strategy I ended up using while playing as the Goliath had me hanging out near a giant alligator-like creature and pushing the hunters toward the creature. I had to be careful though as it could decide to attack me at a moment’s notice too. 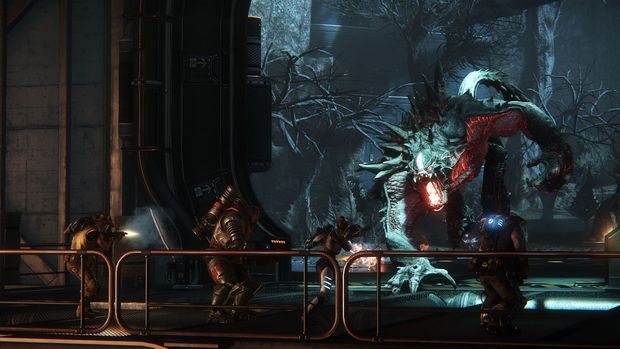 I’m told there will be story experience in Evolve too, but it’s sounding more or less like Left 4 Dead‘s “story.” You know, there’s an overarching story there but you’re not playing it all for the narrative. As for what it’s about, it involves how humanity has expanded throughout the galaxy, and the game takes place on the planet Shear where hunters are sent in to eliminate the monsters in order to protect human settlers.

My biggest concern with Evolve going in was just how they would pull off the balancing between the four-versus-one nature, but I think Turtle Rock really nailed it. It never felt like one side was stronger than the other by default, it just came down to player skills. I saw some matches last less than ten minutes, while others took nearly a half hour before someone finally won. I have to add that the visuals are just fantastic too, and really shows off what developers can achieve on the new generation of hardware.

I loved playing as the Goliath. In my final match, I ended up killing all but the Support class player. I had less than a minute to finish him off, but he had a cloak ability so he was off in hiding. The Goliath has an echo-location type ability which helped me track down the area the Support player was in, and using my fire breath gave away his location, thus allowing me to kill him off before reinforcements arrived.

On the other hand, playing as the hunters wasn’t all that exciting for me, and that’s mostly because of the teamwork aspect here. I’m typically a lone-wolf player when it comes to these type of games, and that’s what Evolve ultimately comes down to. If you love the cooperative game experiences, and I mean really cooperative where you’re talking and leaning on each other at all times, then you’ll really enjoy Evolve.