Set for release on April 16th

The year was 2009. Back when the Xbox 360’s XBLA Summer of Games was all the rage, a small little downloadable title called Trials HD came out of nowhere and won the hearts of players. With two sequels, and several million copies sold, Trials has been a staple of downloadable gaming scene and has garnered a loyal and devout following.

Now, with another title on the way, the developers at RedLynx and Ubisoft have gone all in and made Trials: Fusion the most content rich and expansive title of the series. With over 150 developers working on the title across three different studios, Ubisoft plans to give fans and newcomers alike a crash course in making a splash with this bizarre and challenging puzzle racer.

In a first for the series, Trials: Fusion features a narrative. While the previous games didn’t have much a story, Fusion takes place in a sprawling metropolis set in the far future, where humans and robots alike must compete in challenges across the city and surrounding areas, all in the name of progress for their respective faction. The developers at RedLynx believed that having a greater context for setting allowed them to create a unified style and add more personality in their game, though they assure fans that the storytelling will be passive and won’t intrude on the core gameplay.

As fans can expect, you’ll be tasked with driving, jumping, and trekking through a series of devious and brutal tracks across several different environments and game modes. Set across a variety of difficulty settings, including the return of the dense and brutal Extreme tracks, Trials: Fusion challenges players to keep focused patient while maneuvering an ever-changing track. Of course, this is all done through a real-time physics system, which will constantly be at odds with the player. 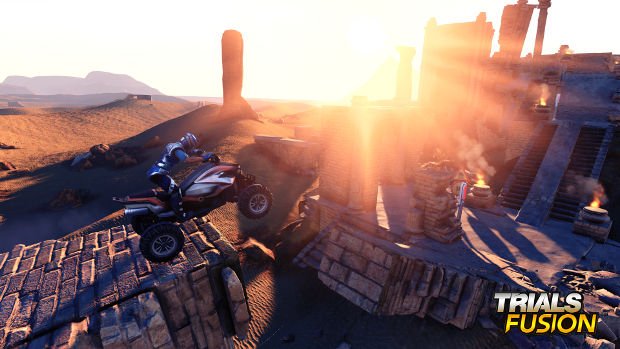 Much like the previous games, many of the levels in Trials: Fusion were created using only the title’s in-game level editor. The developers felt this was important, not only to show the flexibility of their track creator, but also to allow fans to take ideas and incorporate them into their own creations. As of now, the Trials level editor across all versions of the game has over 600,000 uploads, and the developers at RedLynx and Ubisoft plan to keep supporting it after launch with new online challenges and updates.

Player profile and customization have a much greater focus in Trials: Fusion. With far more content than any of the previous titles, RedLynx wants players to be able to build their online and player personality. With multiplayer racing set to return, players can expect an expanded character customization to set themselves apart from others online. Featuring new outfits, designs, color schemes, and even cyborg appendages to add to your racer — players will able to define their character as they see fit.

Moreover, there are even new vehicles to use. Bicycles and Quad-bikes are available, the latter of which changes things quite a bit. The quad-bike is much slower and heavier, but is able maneuver steep terrain and stay more balanced than other vehicles. 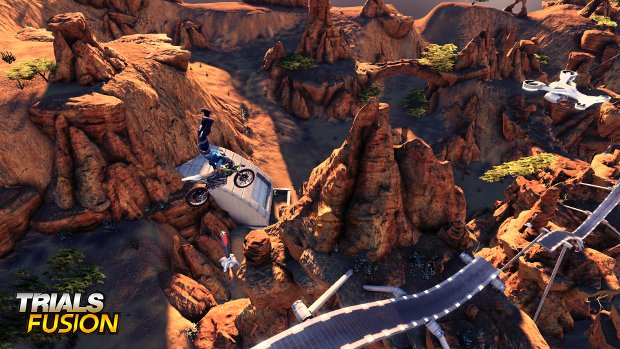 In a game about pulling off sketchy and otherwise daring stunts, it’s a wonder why they haven’t incorporated a developed trick system. Well now, they’ve done just that. Using both the left and right analog sticks in midair, you can have your player perform flips and other death-defying moves to score points or just to show off. Though don’t get cocky, spending too much time tricking will only result in a brutal landing.

Now before you assume that this will get in the way of the puzzle aspect of Trials, I can tell you right now that it doesn’t. In fact, not only are they completely optional in standard trials and races, there’s a brand new mode called FMX where performing tricks is the name of the game. In this mode, players are challenged to pull off as many tricks as they can without crashing. This mode in particular was pretty fun, as it allowed me to cut loose and see what moves I could do during the simple or daring jumps.

Another new feature that will have players returning to old courses are the track challenges. For every trials mode are three sub-goals that task players with completing strange conditions. These challenges offer a unique change of pace, and gets players to observe and explore the space of the track, as opposed to clearing through it as fast as possible.

For instance, on one track I was tasked with performing several flips during a single jump. Typical, right? Well, the next one required that I play tennis. I noticed that I passed a tennis court, so I reloaded the tracks and hit the breaks while on the field. Next thing I knew, I’m being challenged by a penguin to a game of tennis. And yes, I actually played a game against him. It was weird, but amusing. 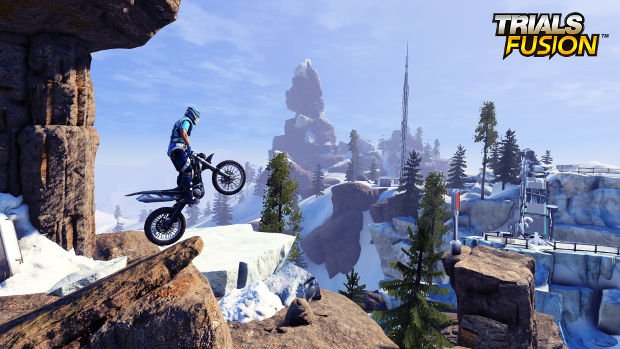 Though, I have to admit, some of the challenges can come off as vague and unclear, requiring players to be mindful of specifics spots when they’re more likely focused on trying to complete the track. There were moments where I felt the challenges took away from the focus on traversal. While many of them were clever and rewarding to figure out, there were some that just fell flat.

With Trials: Fusion set for release on April 16, there’s much to like about this installment. In many ways, this feels like a Trials game without the limitations of budget or technological. Though there were a number of numerous bugs that need fixing, such has freezing during loading screens and some rather odd physics based glitches that were distracting during gameplay. Despite all this, Fusion is still looking pretty good, all things considered.