2016 was a wild year. Humanity got a raw deal over the last twelve months. Cool people died. Actual idiots got elected into office. Cigarette prices went up. I still can’t buy beer at a gas station in Pennsylvania.

Basically, the world went tits up.

But through it all, 2016 still had its fair share of small victories, especially when it came to some seriously good games. Now that we’re finally putting 2016 to bed, I figured it was high time to take a look back at my favorite games all year. 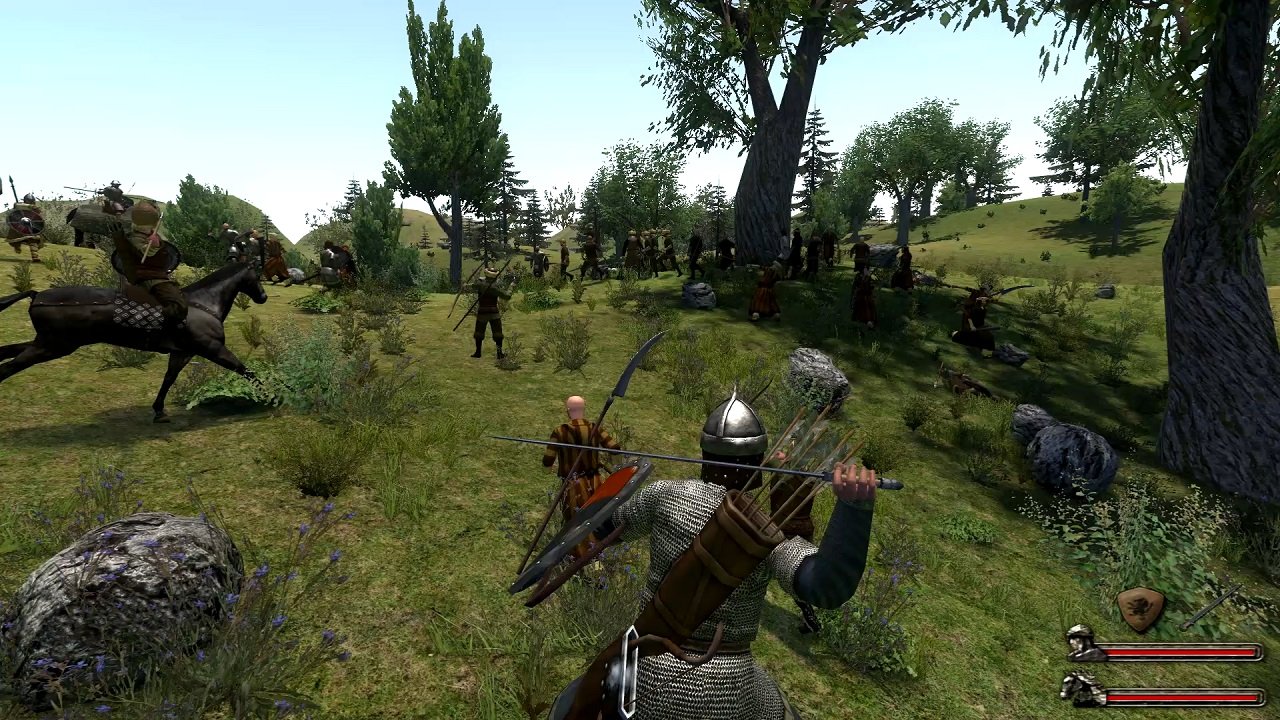 When I heard that Mount & Blade: Warband was being ported to the PlayStation 4, I nearly fell out of my chair. I like to think of Warband as the de facto leader of the Janky Game Crew. It’s not much to look at; it’s raw, and it’s clunky. Sometimes, it’s really confusing. But regardless of its faults, Mount & Blade: Warband is an amazing and immersive game.

For those who aren’t in the know, Warband is essentially a medieval warlord simulator. You make a character, pick some skills, and are thrown into a world of warring factions and roving bandits. What you happens next is entirely up to you.

Mount & Blade: Warband can steal away countless hours. I’ve spent entire days raising an army, screwing over kings, and winning jousting tournaments. If you’re interested in role-playing games, strategy sims, or just want to raze villages to the ground, you need to play Warband. And yes, the PS4 port is exceptional. 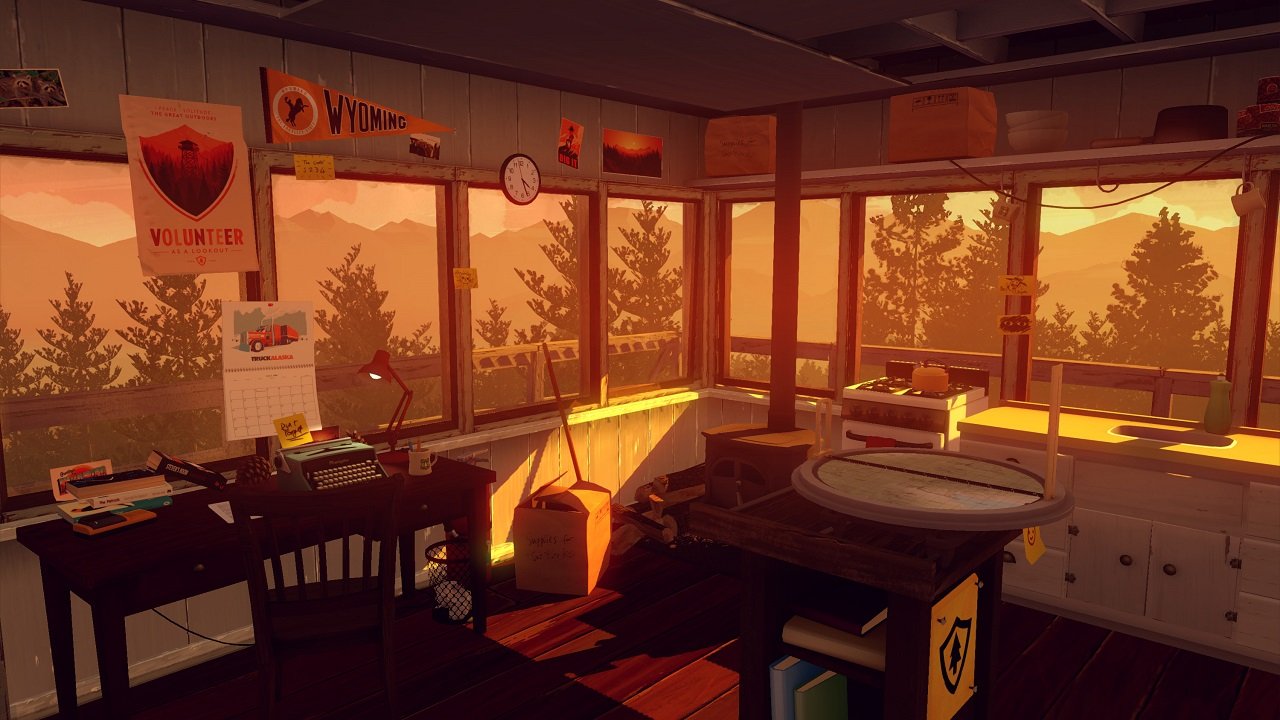 Firewatch is a game about longing and self-exploration set against the backdrop of Yellowstone National Park. You play as an aging man named Henry who has decided it’s better to run away from his issues at home than to face them head on. His wife is sick, and in the face of uncertainty, Henry takes up residency as a fire lookout in an isolated part of Wyoming. Over the course of his tenure, Henry hopes to figure out what the hell he is going to do now that his life is falling apart.

The whole of Firewatch feels like a painting come to life; wilderness brushed in burnt oranges and verdant tones. It’s idyllic in a way that games rarely are. Simply walking around in Firewatch captures the majesty of being surrounded by nature.

But more impressive than its art direction is the game’s writing. Over the course of Firewatch’s four hours, Henry develops a relationship with his supervisor, Delilah. Though you never see Delilah, her constant conversations with Henry are warm and genuine. The way that the two characters grow and rely on each other – especially when Firewatch ratchets up its drama – is excellent and unforgettable.

Also, Brett’s piece on the intersection of Firewatch and Weezer is good as heck. 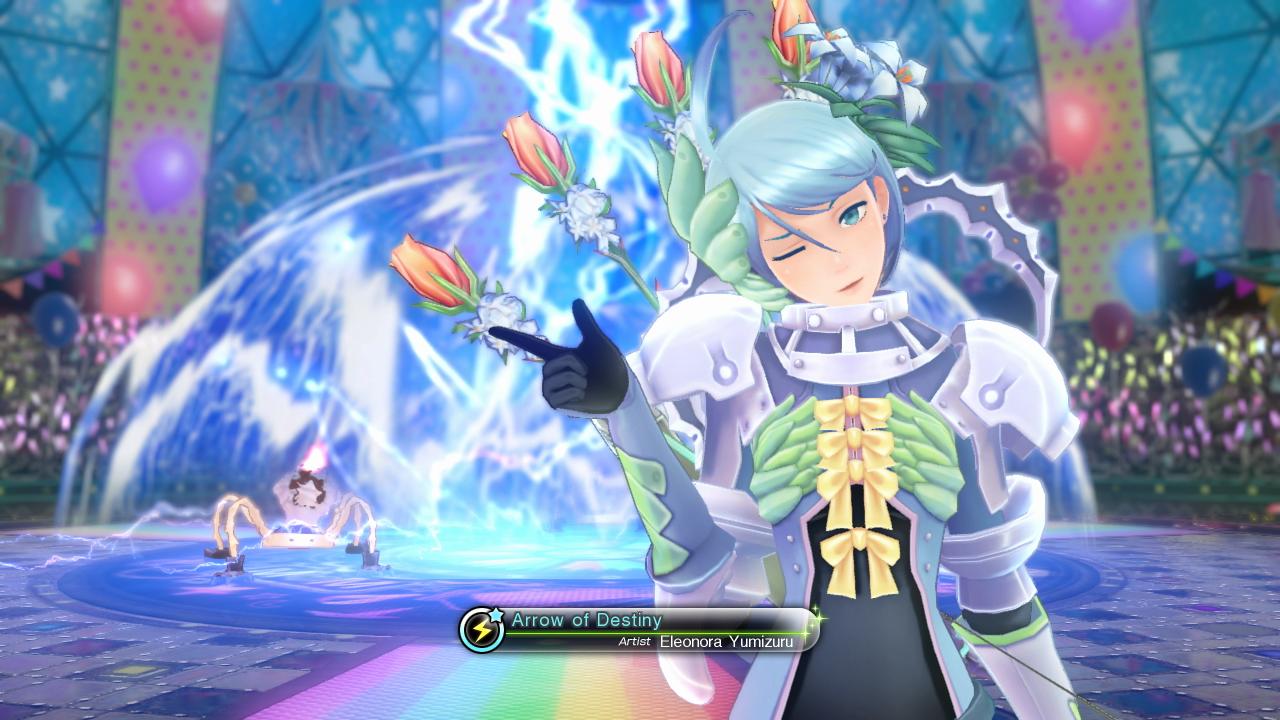 On paper, Tokyo Mirage Sessions #FE makes no goddamn sense. It’s a weird hybrid of Shin Megami Tensei combat and Fire Emblem character classes jammed into a game about being a pop idol.

It’s more than the sum of its parts, however. The strange concoction of gameplay mechanics and pop music influences makes for one hell of a JRPG. When it all comes together, Tokyo Mirage Sessions #FE is undoubtedly the most stylish game I played all year. It’s bright and colorful, cheerful and goofy all at the same time. TMS’s quirky charisma and decent challenge were more than enough to keep me dazzled for dozens of hours. 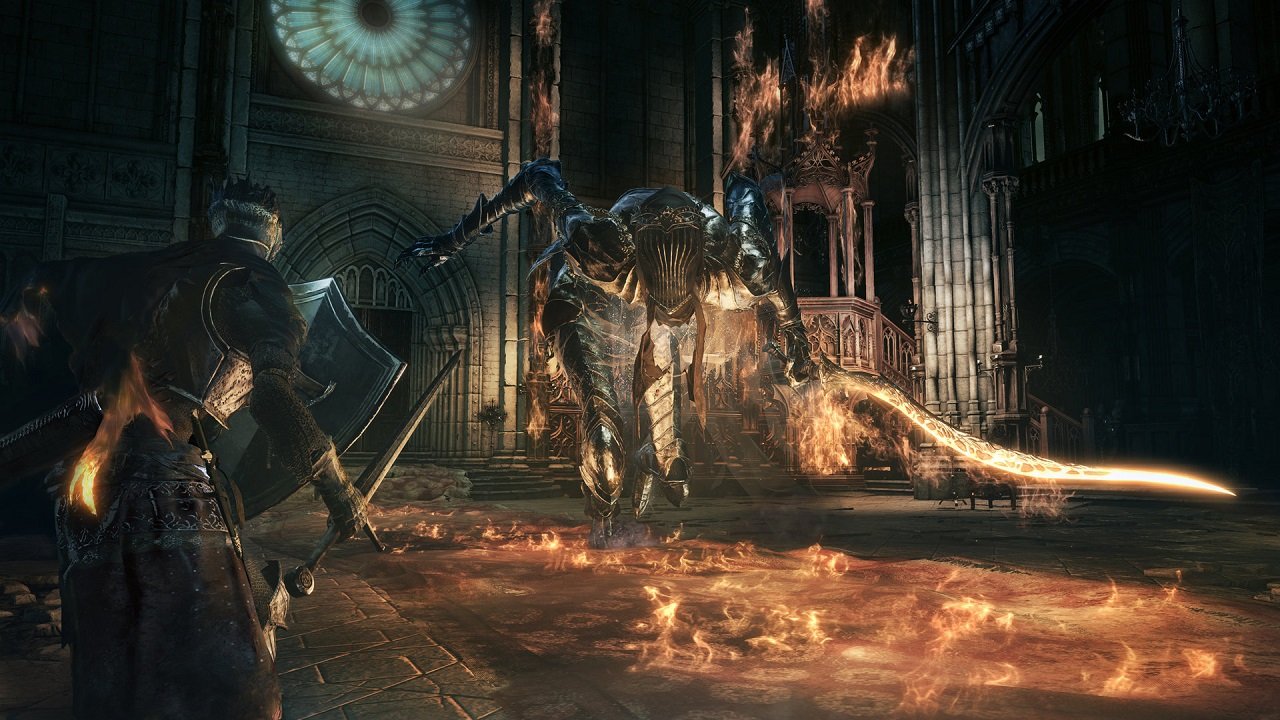 I’ve been chasing the ghost of Dark Souls for years.

The latest – and probably last – entry in the Dark Souls saga came close to capturing everything I loved about the first title. Dark Souls III’s prevailing sense of mystery and steady difficulty was well executed and balanced. Dark Souls III, perhaps more than its predecessors, felt bleak and hostile towards the player, which in turn made each new area a well-earned reward.

A lot’s been said about it functioning more as a Souls Series “greatest hits compilation,” and I think there’s merit to that idea. I’ve spent hundreds of hours limping through the Souls games, and I will probably spend a couple hundred more. By feeling familiar in its locations and designs, Dark Souls III allowed me a chance to rekindle fond memories while forging new ones. It’s a decent game in its own right, but an excellent companion to one of my favorite series. 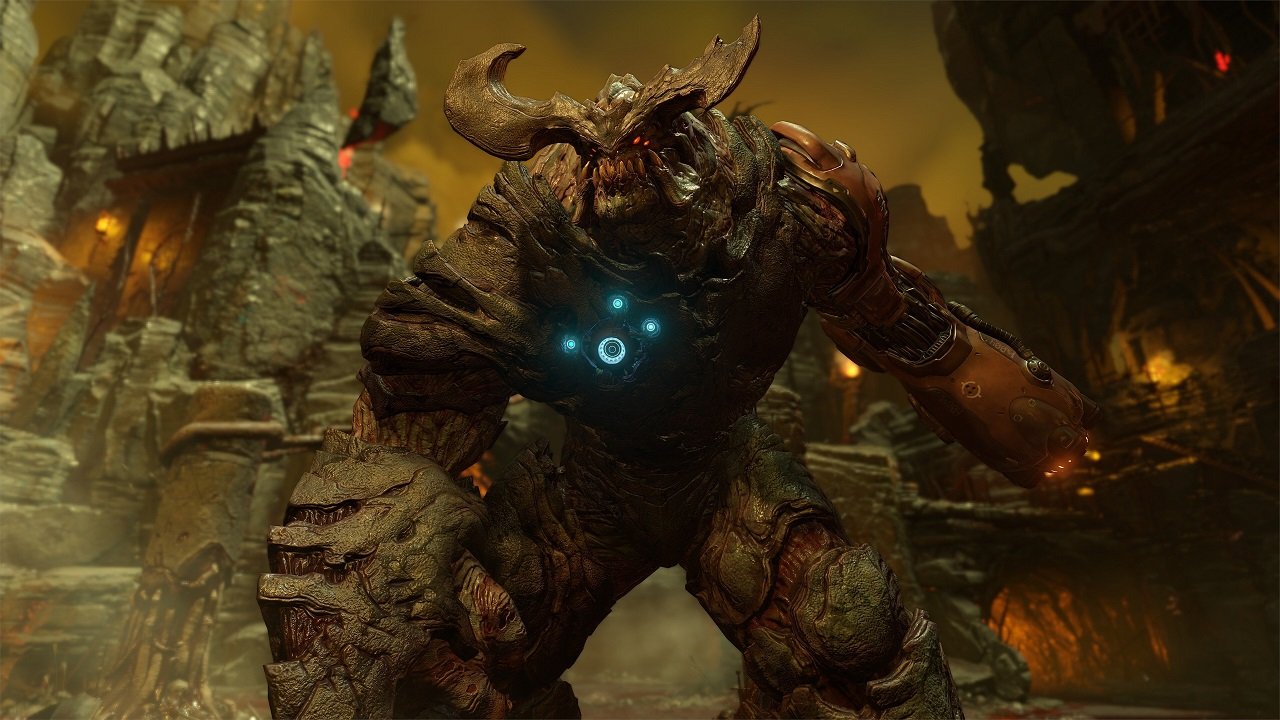 To play through DOOM is to master the language of violence. Its gory gunplay and glory kills are the syntax of primal, bloody expression. The empty shotgun shells that litter the floor are periods at the end of particularly brutal sentence. Each rocket fired squarely into the stupid, squishy face of a Cacodemon functions as a descriptive statement of creative rage. Every Imp whose neck I snapped is a particularly crunchy exclamation mark, both punctuating my experience and urging me onward toward the next combat arena.

The sheer speed of DOOM is an absolute rush. While the first-person shooter slowed down over the years, DOOM’s emphasis on fast movement was an electrifying return to form. By being fast, loud, and violent, DOOM blew me away. Absurd gameplay and a gleefully self-aware story brought the entirety of the game together into a brazen, delightful shooter that was better than it had any right to be.

DOOM is the standard by which all other first-person shooters should be judged. 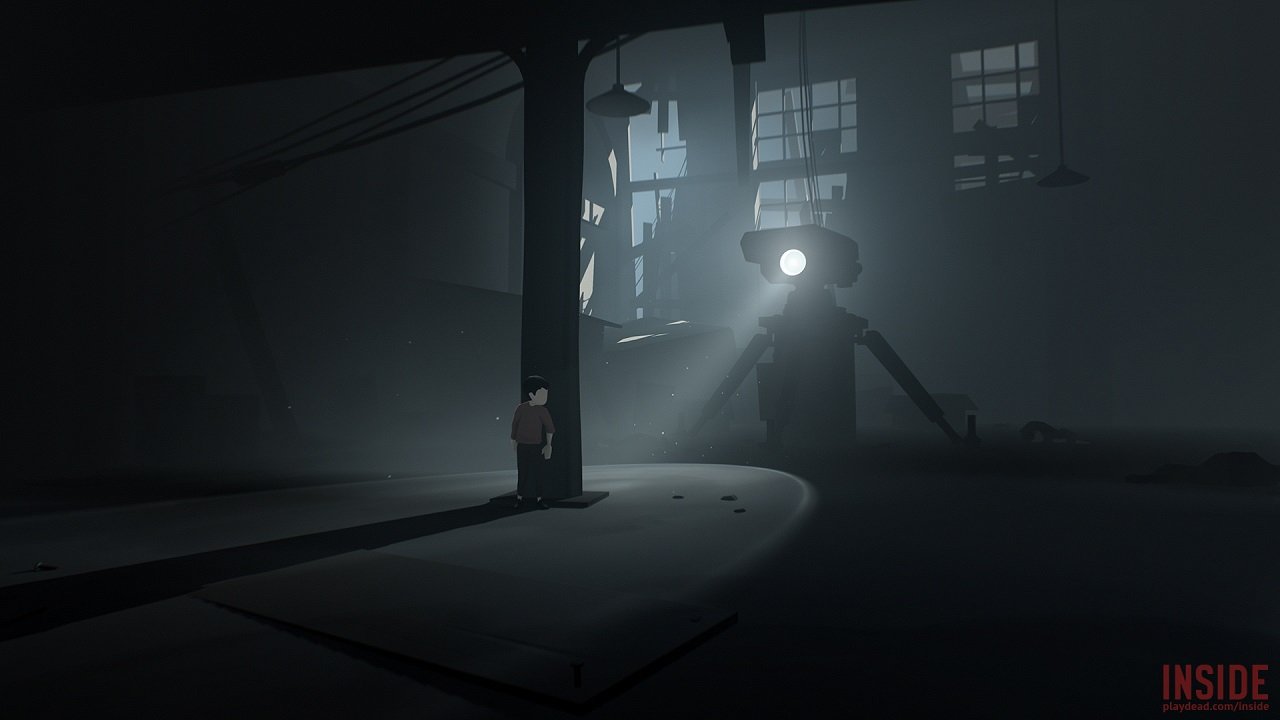 I didn’t play Inside until December 27. Immediately after I finished a playthrough, I had to rewrite my entire game of the year list to include it. Inside is that good.

Playdead’s previous game didn’t land for me. Try and I might, I bounced off of Limbo within a few minutes. I assumed Inside would be more of the same.

Inside is fucking tense in a way that games rarely are. It’s haunting and atmospheric, polished and brooding. Every part of Inside feels like a diorama of muted colors and industrial grime. It’s minimalistic while coming across as utterly huge. Inside looms over you, pushing you further by reminding you of the nightmares you’ve already overcome.

The final third of Inside literally made my jaw drop. It’s as horrifying as it is mysterious. No game has ever made me feel as uncomfortable and curious as Inside has. It is damn-near perfect. 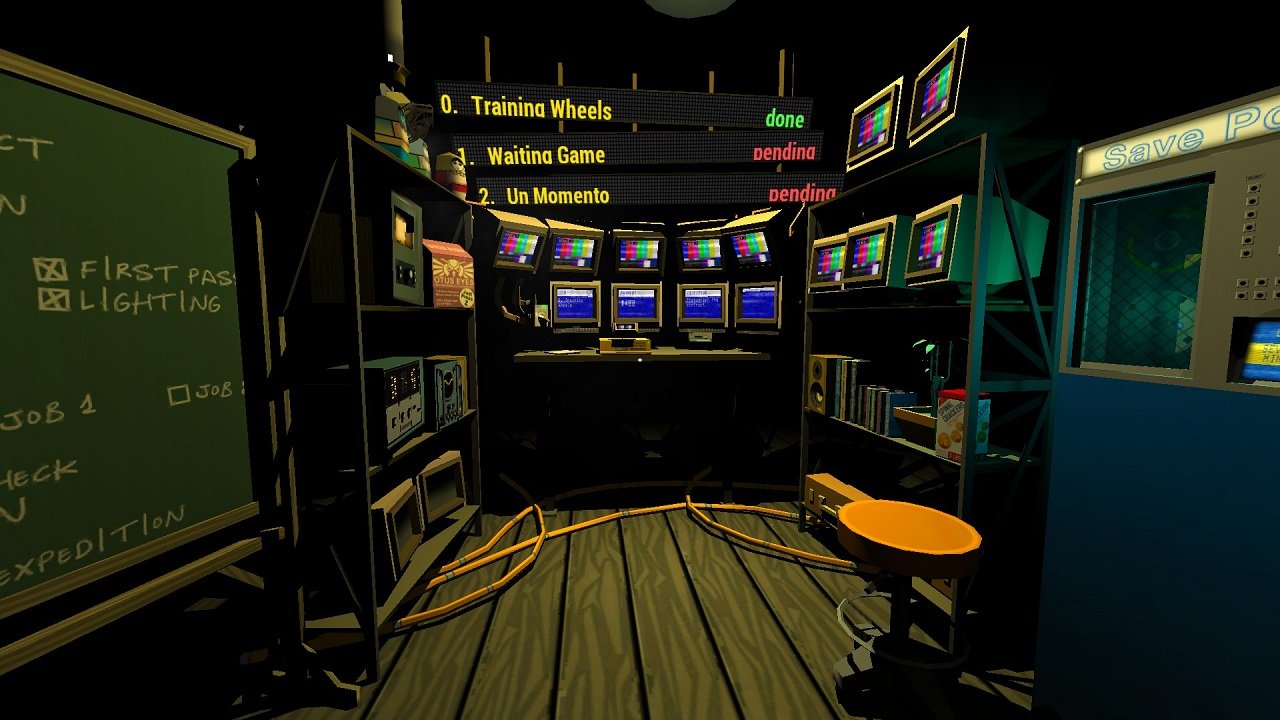 Quadrilateral Cowboy deserves a place on this list for its name alone. Say it a few times. There’s a cadence to the way each syllable rolls off the tongue.

And cadence is an important word when talking about Quadrilateral Cowboy. The entirety of the game is intricately pieced together to make for an experience quite unlike anything I’ve ever played. For a short game ostensibly about planning high-profile heists through a virtual reality headset, Quadrilateral Cowboy manages to contain more heart, and more lived-in spaces, than most big-budget titles can even dream of creating.

Quadrilateral Cowboy builds with a cool confidence. Players are given an impressive arsenal of sleek spy shit – all operatable from a computer within a suitcase – and thrown into a series of wonderfully crafted/designed levels. Your mission, should you chose to accept it, involves mastering your tools, stealing/photographing/whatever some important objects, and escaping without a trace.

But amid command-line interfaces and remote-controlled cameras, Quadrilateral Cowboy takes time to dwell on tender moments shared between the main character and her small band of thieves. Each scene adds weight and context to your actions, turning the player’s time with the game into a singular, rich experience that has major staying power. You might have slept on Quadrilateral Cowboy when it released, but its lo-fi spy fiction and retrofuturistic aesthetic should not be missed. 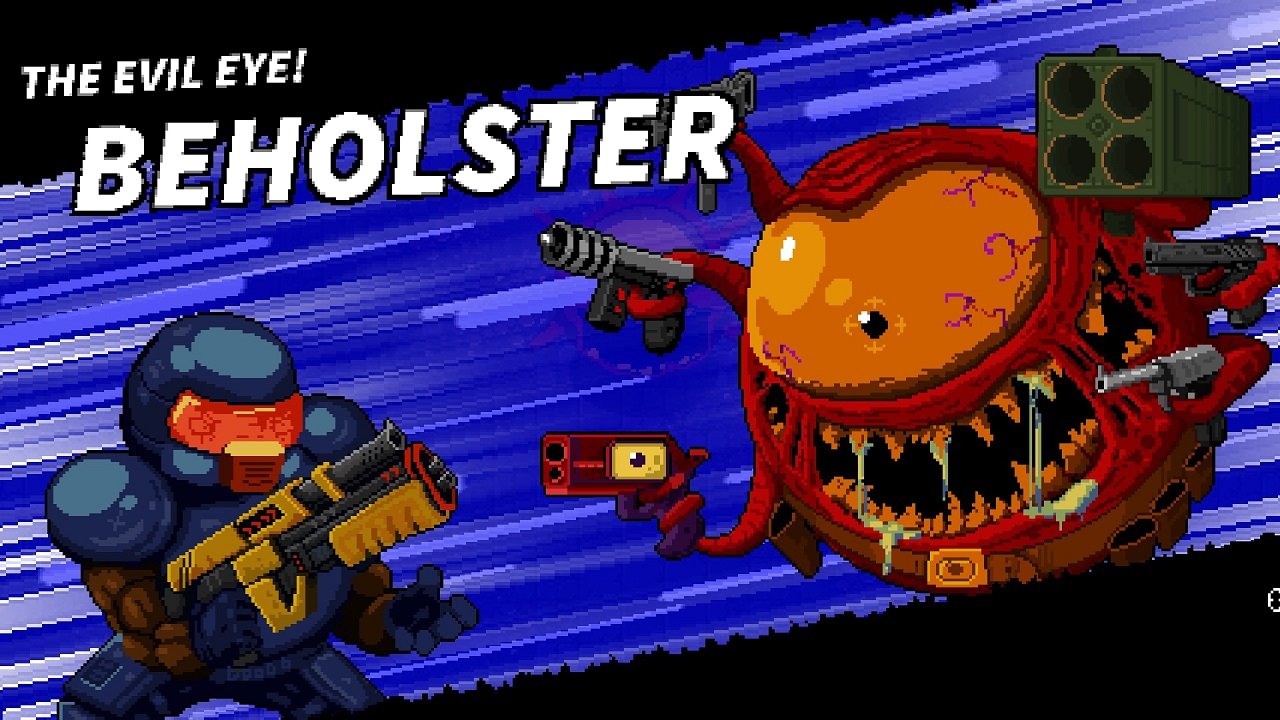 It’s a game with a serious gun fetish. There’s something like 200 guns that players can unlock and master hidden away. They range from AK-47s to fireable bee hives with everything imaginable in between. When I reviewed Enter the Gungeon, I wrote that it has “a has a free-flowing feel to it that turns the din of combat into something like good jazz music.” Eight months later, I stand by that statement, especially considering the fact that I play it almost daily. 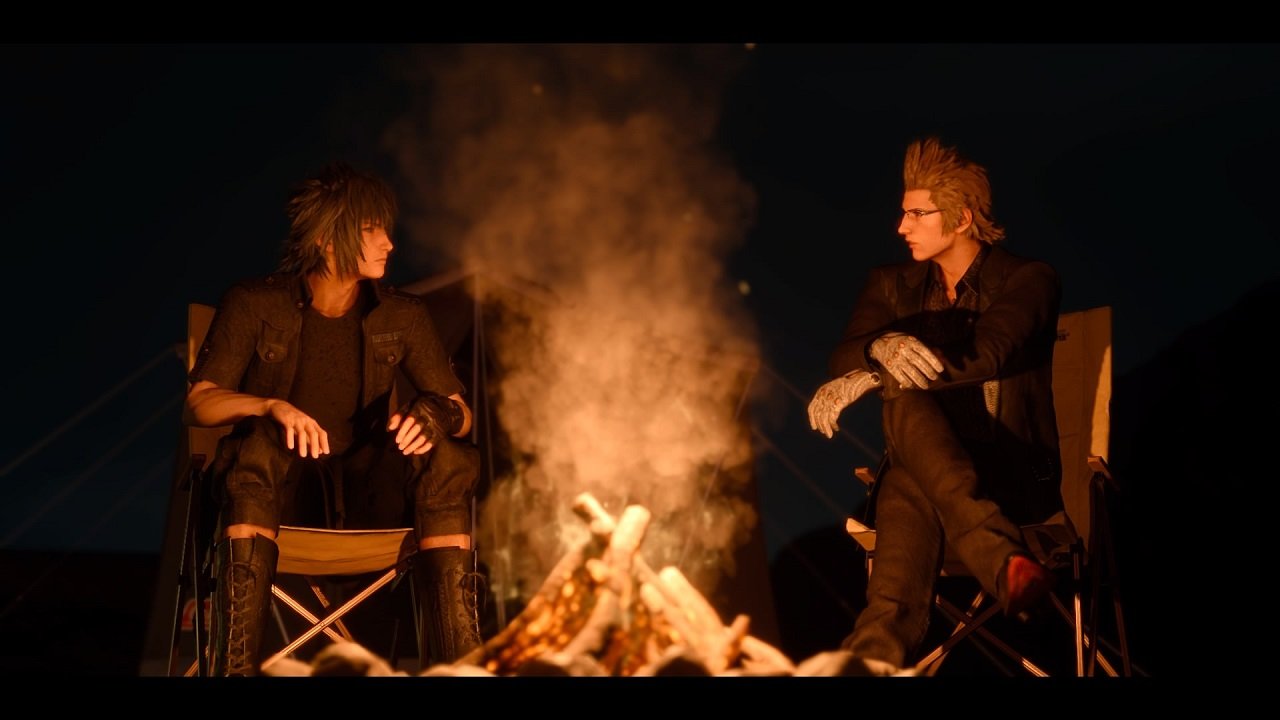 After languishing in development hell for so long, I didn’t know what to expect from Final Fantasy XV. I wanted it to be great, obviously, but part of me figured that it would be middling at best.

Final Fantasy XV wound up being a big, weird mess that I can’t help but love. It’s a game full of nervous energy that comes across as over-eager to impress players at every turn. It constantly pushes and pulls your attention in a dozen different directions; bucolic scenery and monster hunts compete with mechanical soldiers and political intrigue at every turn. It’s overwhelming at best and clunky at worst, but it’s always enjoyable (even the much-maligned Chapter 13, fight me).

To me, Final Fantasy XV excels when it slows down. The times when Noctis, Gladio, Prompto, and Ignis have a chance to breathe are immediately gratifying. The long drives and idle banter between each character are instantly memorable and surprisingly touching. I don’t like Final Fantasy XV as a sweeping JRPG about defeating a Big Bad Villain and saving the world; I love Final Fantasy XV as a game that explores the spaces between dramatic moments. 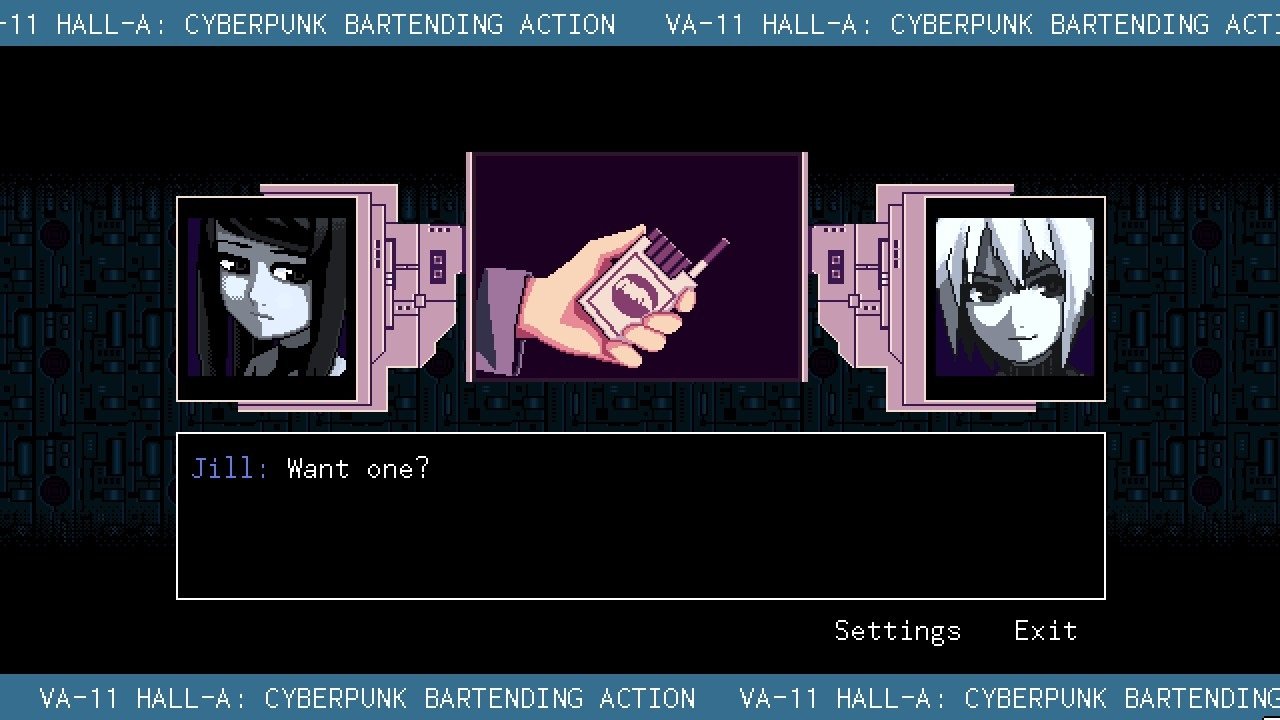 If you read my entry for Destructoid’s Best New Character of 2016, then you probably have a solid understanding of why I like VA-11 HALL-A so much.

VA-11 HALL-A is a street-level story of life in a cyberpunk, dystopian city. As Jill, a bartender at what must be the world’s goofiest bar, it’s your job to serve colorful patrons and make sense of a chaotic world.

The characters of VA-11 HALL-A are all exceptional. Everyone Jill meets and interacts with has a personality and character arc that makes you want more. By serving drinks and listening to their stories, players get a chance to feel like they belong in a world where anything is possible. There’s a level of authenticity that persists throughout VA-11 HALL-A despite its futuristic setting. Every line of dialogue – and holy shit there’s a lot of talking in the game – is nuanced and well-realized. I can’t help but want to play this game over and over again. 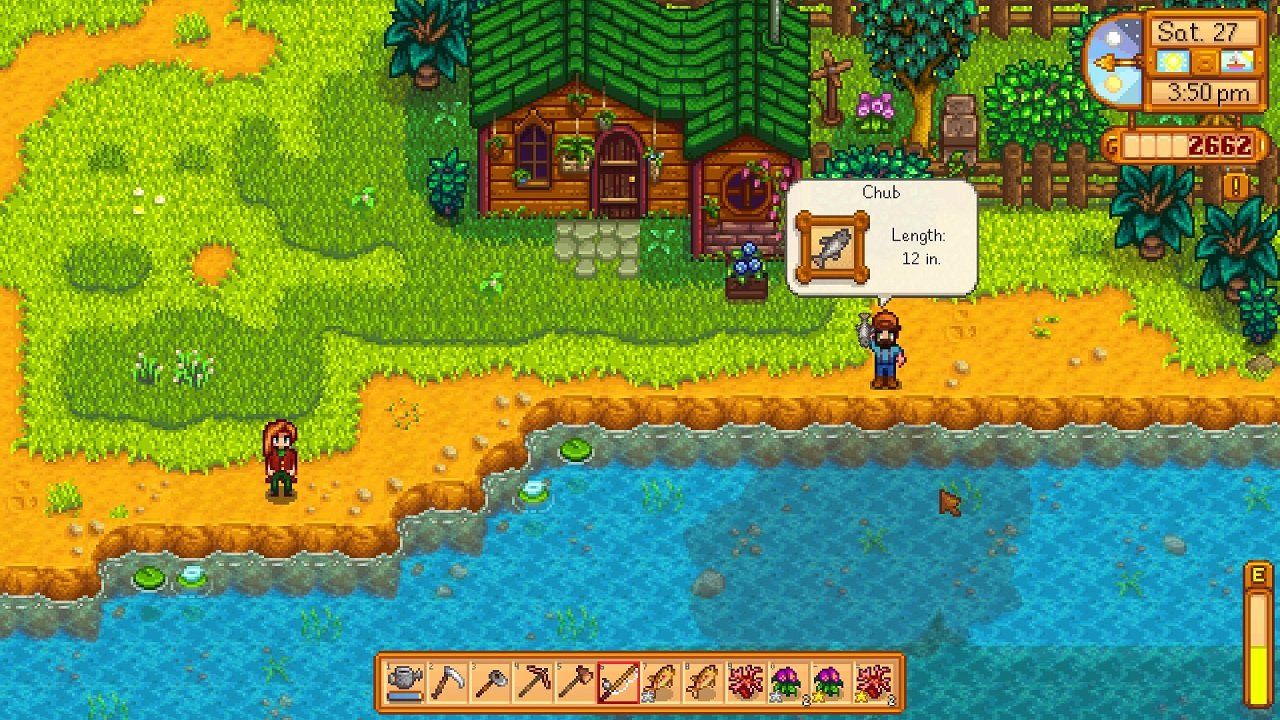 There’s so much to do in Stardew Valley. In addition to the farming that serves as the game’s backbone, players can fish, forge friendships with villagers, explore a dangerous mine, and become a master craftsman. It’s an evolution of the formula laid out by Harvest Moon that understands the beauty of simply existing in an idyllic world.

The best thing I can say about Stardew Valley is that it’s warm and inviting. Everything you do in the game is worthwhile. Giving gifts to villagers and learning about their lives is as satisfying as reaping a bounty of fresh crops. Catching an elusive fish feels just as good as finally clearing all the clutter off your farm. It’s a game that is almost always gratifying, even during its quietest moments.

Stardew Valley is my forever game. I can see myself returning to it for years to come.