The writing says ‘you are bad at this game’

Turn-based tactical espionage. Those words were all it took to sell me on the idea of Invisible, Inc. Going into the PAX demo, I knew I would have to be cunning, thoughtful, and sneaky if I wanted to successfully steal intelligence and make it out alive.

As it turns out, I overestimated how cunning, thoughtful, and sneaky I am. Invisible, Inc. requires proper espionage; players who run in and try to blow stuff up like James Bond will not make it far. Even those who play cautiously will often find themselves in sticky situations, outnumbered and outgunned with no hope for a clean exit. 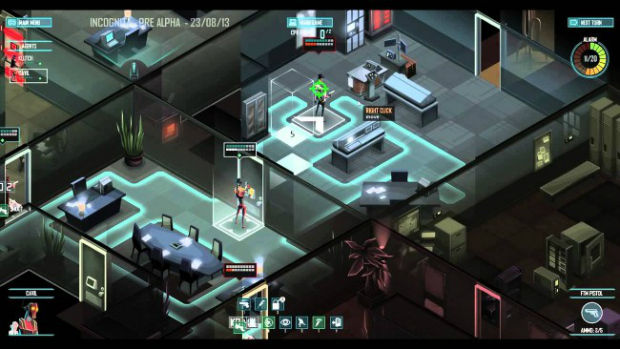 At a base level, Invisible, Inc. is fairly easy to grasp. The player controls a small team of spies tasked with infiltrating a well-guarded building and stealing information. The action takes place on a square grid, with areas out of line of sight not shown. Play alternates between the spy team and the corporate team, rather than by individual units. Units have a certain number of movement points along with one action point to spend every turn.

One mechanic that allows the player to feel more like a heist coordinator is that each unit can be activated any number of times during a round, so long as that unit has action or movement points remaining. As a result, the player can move one unit to a corner, peek around it to see if the coast is clear, move a different unit down that hallway, and then return to the first to work toward a different objective.

Using this ability to make plans come together feels particularly satisfying, but it also has some use when things fall apart as well. When a guard spots any of the spies, it will pursue unless incapacitated in some way. After stumbling with one character into sight, other characters might be able to jump in and help keep the guard busy.

Directly engaging the guards is rarely the smartest option, but the spies do have a few tricks to employ in case they need to. Each unit can knock a guard out from behind, which incapacitates the guard for a full turn. Other abilities are made available through items, either equipped from the start or found throughout a mission. Of the two characters in the PAX demo, one had a single-shot tranquilizer gun that would put an enemy down for good, while the other had a low damage pistol, meant more for distraction or as a last resort than for taking guards down.

The spy units have fairly meager health, only able to take two or three shots before going down. In contrast, the guards had something on the order of eight health apiece. Firefights or face-to-face brawls are not the way to go.

One of the other aspects ofInvisible, Inc.is the hacking screen. Bringing it up, players can see electronic devices in the vicinity, and by spending CPU points (which accumulate over time or can be found in safes), the devices can be hacked to work to the player’s advantage. For instance, taking over a security camera will not only prevent agents from being spotted by it, but will also provide eyes on an area without having to be physically present. 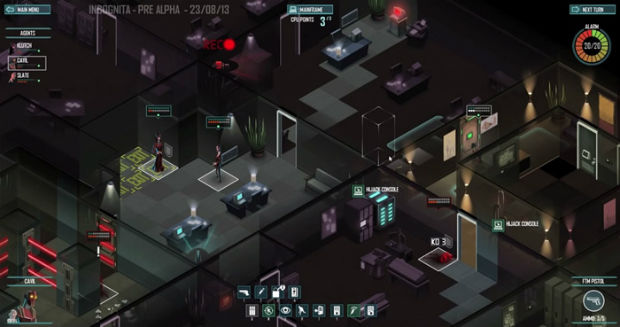 With those tools and some patience, the agents can hope to avoid detection, but things can go awry for those who take too long. Each turn, the threat level is increasing, and the corporation is becoming more and more aware of the spies’ presence. Toward the end of my time with the demo, I was able to see an elite squad of guards dispatched, in addition to the native guards in the area. Were I not already about to lose, it would have been particularly worrisome.

I can imagine getting into Invisible, Inc. pretty deeply. Like a lot of great games with procedurally generated environments, it seems brutally difficult at first, but each defeat teaches a lesson. At no point did I feel it was unfair, because everything that went wrong in my first mission was my fault, and the game systems do a good job at making that clear. Though a single mission does not run especially quickly, it is not so long that the “one more try” mentality is absent.

So far, Klei is living up to their name in delivering fair, difficult stealth gameplay. I am looking forward to getting some more time with Invisible, Inc. Next time, I think I can do better…