My wife and I love cooking. Baking…it’s a slow work in progress (and many pro bakers would tell you it’s a lifelong process), but we dabble, and are getting better every year.

It helps if you’re spurred into action by video game themed material, including theHearthstone: Innkeeper’s Tavern Cookbook, a follow-up to the World of Warcraft Official Cookbook by the same author. 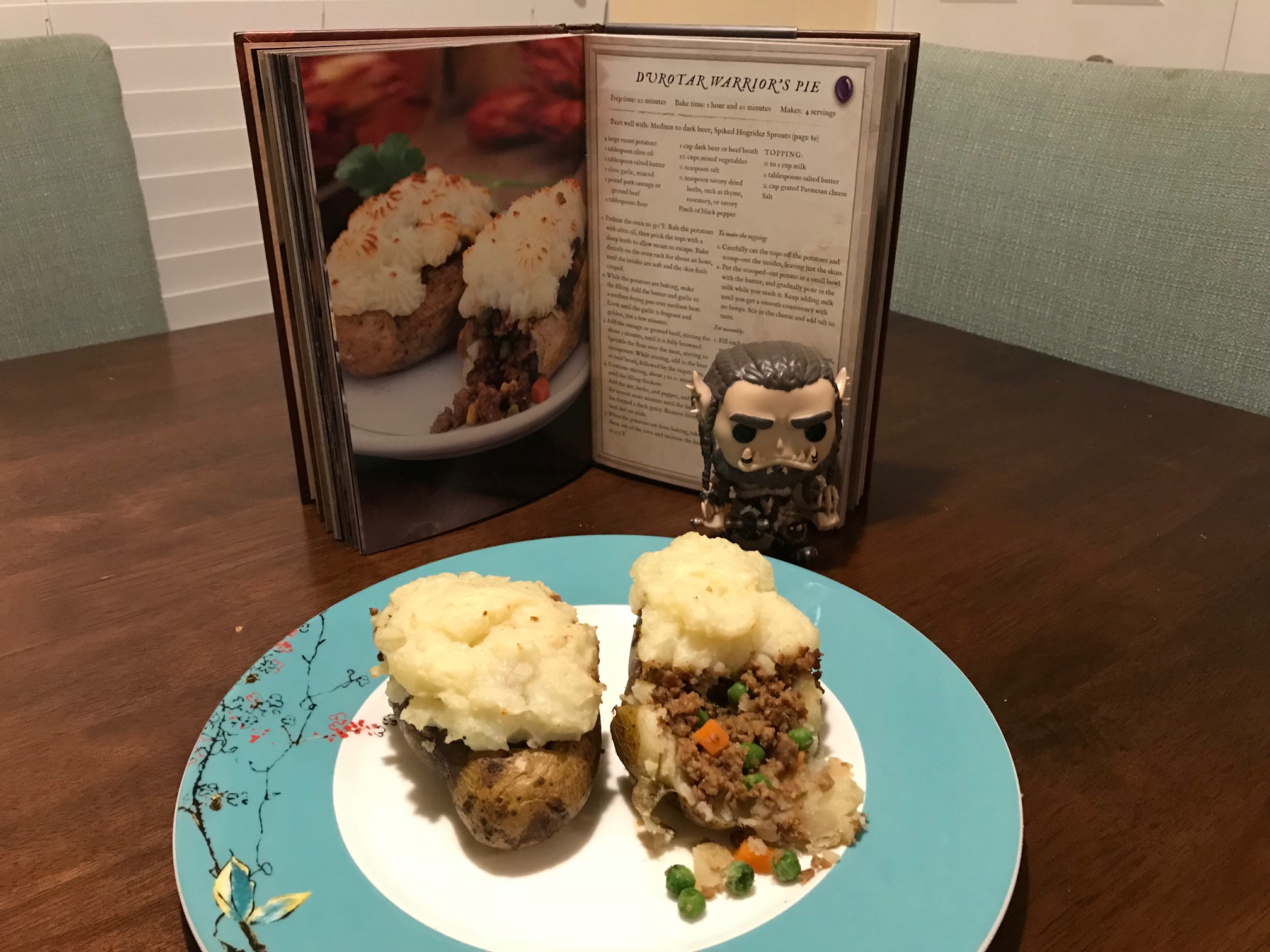 Although it doesn’t specifically state it anywhere, the Hearthstoneedition is more of a companion for the proper Warcraftcookbook. Its main focus across 112 pages is cocktails, mocktails, condiments, sweets, and “savory bites.” The latter is mostly relegated to side dishes or snacks, but there’s several big entrees peppered in. I’m actually okay with this being a smaller affair, as it’s a little cheaper to match that conceit.

The first dish my wife and I crafted was the “Durotar Warrior’s Pie,” also known as stuffed baked potatoes. No stranger to the concept we delved into the instructions, which, in trueMonroe-Cassel fashion, were clear and concise. Having tried out several “meal kit” companies in the last several months and getting frustrated by out of order directions or oddly worded phrases, it was refreshing to come back to reality. The obvious separation of major steps is also great in case you need to quickly come back to the recipe after letting something sit or bake for a while.

The “pies” turned out great, and we were especially impressed by the gravy, which ended up forming organically with everything else in the same pan while the potatoes baked — it’s definitely something we’d make again. As always it’s easy to make substitutions (we chose fake meat instead of ground beef, which looks/tastes exactly the same), and vegetable broth instead of beef broth, and it still turned out great. 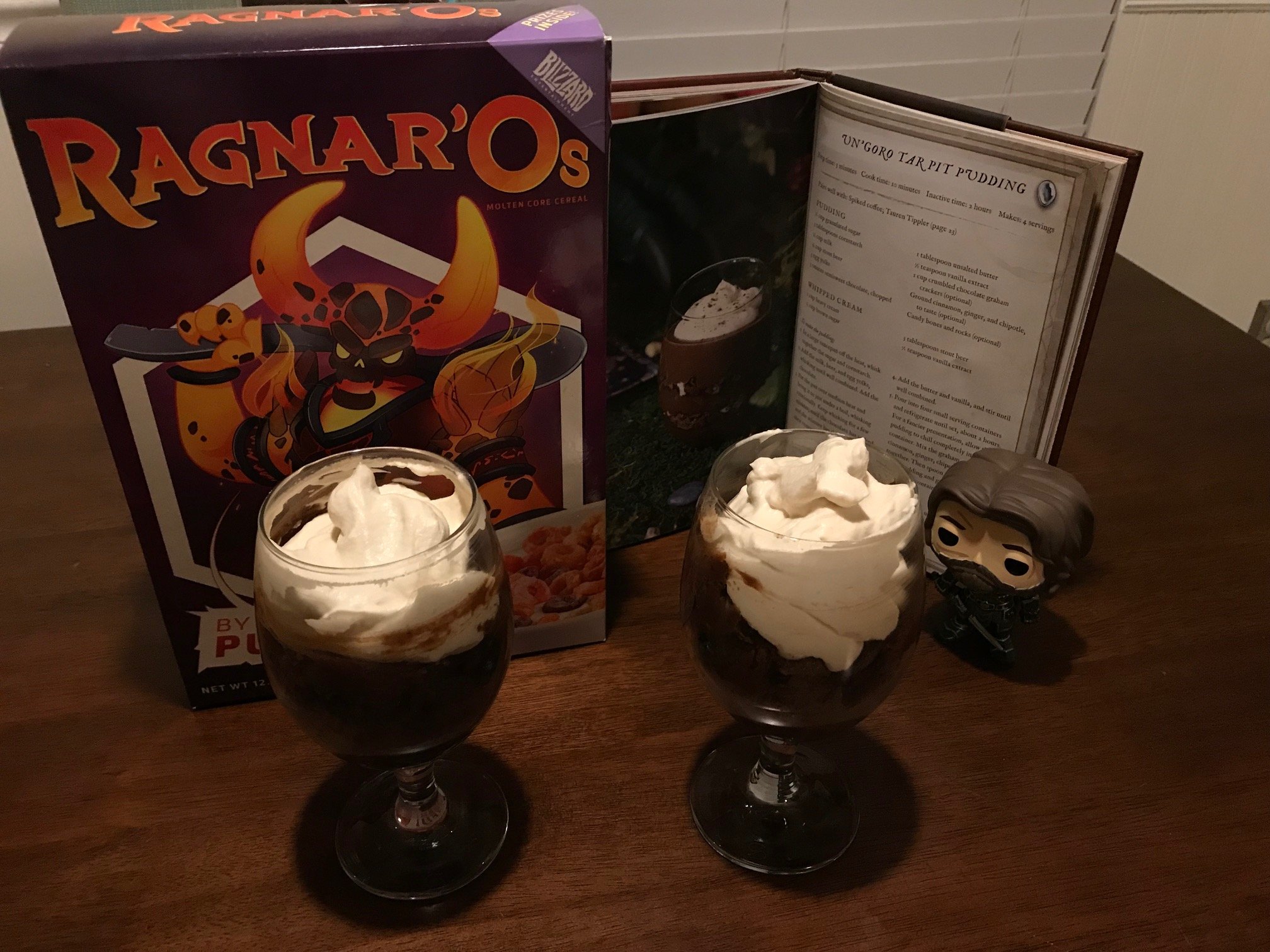 For our second big test we went for the Un’Goro Tar Pit Pudding, as we had never made pudding from scratch before. Just like the main course it was a cinch to follow, and the portions of sugar, cornstarch, milk, beer, and egg yolks to form the base were perfect (thank God we have a million gadgets like an egg separator). Normally baking is a pain, especially if we get random recipes from the internet that aren’t precise, but this turned out wonderfully on the first try.

I have to stress that this cookbook really gets down to business quickly. There’s only a small, three page intro fromHarth Stonebrew (The Innkeeper, or mascot of Hearthstone), and that’s it. I do miss a lot of the little “choose your own adventure” style notes in the Hearthstonecookbook.Monroe-Cassel’s other work would frequently put a little note or callback in the corner of a recipe card somewhere, which was either a lighthearted Warcraftreference or a direction toward one of the many companion sauces or spreads.

Here, space is a little more limited with the smaller form factor and the lighter page count, so it makes sense. There are some, but a portion of them are more innocuous puns and the like to fill up space on the page. The only major weakness in terms of the book’s length is that there isn’t nearly enough time to explain what berries, herbs, and edible flowers are best to use for garnishes in the section that precedes cocktails — only raspberries are briefly mentioned. 59 recopies is a hefty amount to flip through though for most, and given the quality of each one, I can see myself entertaining the idea of making most of them.

Hearthstone: Innkeeper’s Tavern Cookbook works partially due to the strength of the recipes themselves and the notion of this niche little journal to use to create “bar food.” I don’t know how many more ideasMonroe-Cassel has, but I’d easily buy a cookbook based around other Blizzard properties from the same author. A macabre Diablothemed tome would be an interesting thing to bring out at Halloween, and with the bright color schemes and wide cast of Heroes of the Stormand Overwatch, there’s probably enough to fill a small book’s worth of recipes.

[This review is based on a retail copy of the book provided by the publisher.]