MMOs are constantly evolving beasts. Particularly in the subscription realm, developers are always searching for ways to keep players hooked, usually in the form of major updates — big content patches that help ease the wait between even bigger expansions. The latest MMO to get an overhaul is Final Fantasy XIV: A Realm Reborn, which is seeing its “Defenders of Eorzea” patch this week, bringing up the current version of the game to 2.3.

Since this update is even bigger than the vast majority of $60 retail releases, I’ll be looking at everything it has to offer to supplement to our already existing review of A Realm Reborn, which covered up to patch 2.2. 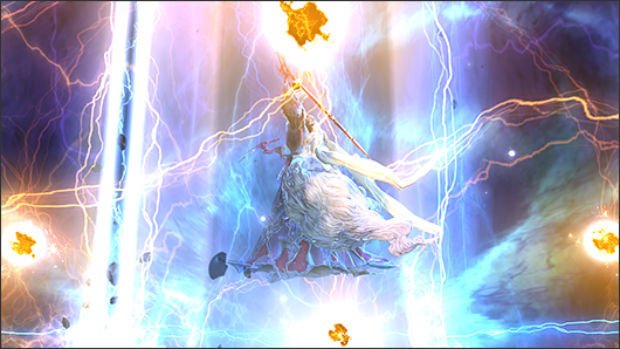 So no, there’s no Third Coil of Bahamut yet — hardcore static raiders are going to have to continue working on the Second Coil raid until patch 2.4, or down the Brutal difficulty, which only grants you a title/achievement. Today, I’ll be going over roughly half of the content, which I’ve tested out this week.

To kick things off, the new story is titled “Defenders of Eorzea,” as it takes you across the entire realm to investigate the Ramuh (pronounced Ra-Moo) disturbance, as well as a hint at a bigger plot that will eventually involve Shiva. Naturally, most of the action takes place in the East Shroud — the Sylph and nature-heavy zone of the game, and can only be completed after finishing Leviathan’s questline at level 50.

Eventually, you’ll travel all across the world recruiting people from every capital city, before finally ending up in the high-level hub of Mor Dhona to cap things off. Just like 2.2’s Leviathan story, 2.3’s campaign is roughly five hours or so with cutscenes, and is very much a table-setting narrative that leads into the content you’re going to be playing for weeks on end. 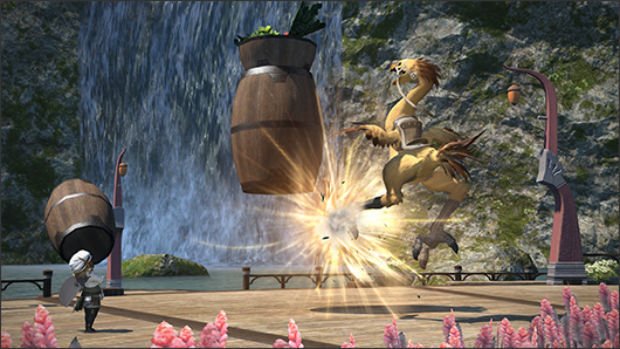 It’s not an amazing addition to the game, but Final Fantasy XIVsincerely tries more than most MMOs in terms of the story, and it succeeds in justifying its dungeons and encounters within the confines of the world. But really here, the meat you’re going to want to consume is the Ramuh fight, which you’ll have to clear in Hard Mode form first (which also unlocks the new Trials roulette).

Simply put, it’s definitely one of the most memorable encounters, not only because of the awesome theme song, but the locale, mechanics, and Ramuh’s actual character design are very well done. Mechanically it’s a lot more involved than most boss fights, since everyone needs to pay attention due to Ramuh’s stun ability and frequent lightning bolts.

Every so often Ramuh will completely immobilize a party member (which could be a healer), so you need to actually strike your teammate with lightning on purposeto free them. The key is not having too many people stack at once, because then you’ll double or triple-up the lightning damage you take. There’s a few more concepts like grabbing orbs to break lightning tethers and killing adds, which also contributes to its fun factor. The key is that the fight is always happening — there’s zero downtime like Leviathan or some of the other Primals.

Of course, Ramuh also comes with an Extreme (EX) variant, which I’ve only had the chance to bring down to roughly 60%, so I haven’t seen all the mechanics yet. Nonetheless, it’s a much harder version that requires a massive amount of communication through voice chat channels — so I’m not sure of its viability at the moment in PUGs (pick-up-groups with people who don’t know each other) until concrete strategies are developed. I’m loving it though. 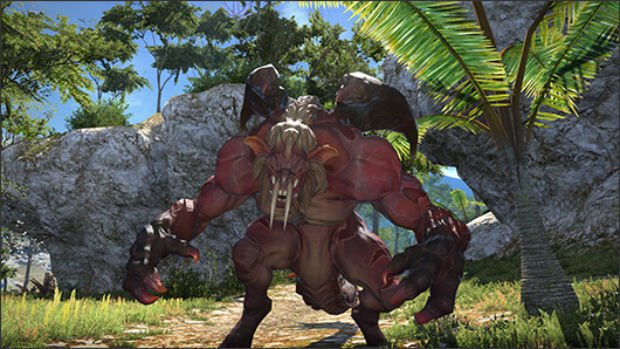 Another massive addition in 2.3 are the three new dungeons: Tam-Tara Hard Mode, Stone Vigil Hard Mode, and Hullbreaker Isle. Like past Hard Mode variants, the new ones are nothinglike the old ones, and feature completely new bosses, areas, and enemies. The good news is that there’s no real old maid this time around that people will hate getting — all of the new areas are good in their own way, particularly Tam-Tara HM, which has one of the creepiest and engaging mini-storylines in the entire game.

It helps that Square Enix is really learning in terms of boss fights, and managed to make every single encounter fun in their own way — particularly when it comes to the final bosses of Stone Vigil HM and Hullbreaker, which are a few of the best encounters I’ve ever played in an MMO to date. You can also really see the Soulsinfluence in Stone Vigil HM, which is nothing but a good thing. Myth and Soldiery tome (the end-game token currency) acquisition is buffed all-around, so you shouldn’t see one type of speedrun any more in terms of running dungeons (thank goodness, I’m done with Brayflox forever).

Of course there is another big dungeon for people to clear (a raid, rather), called Sycrus Tower — another 24-man wing of Crystal Tower, complete with four bosses and little in the way of time-wasting trash pulls. It’s easily one of the most beautiful-looking areas in the game, and the actual boss fights are created to be simple to understand, yet fun to fight. Although people are already getting them down, it’s still totally worth it just to see the battles and enjoy the mechanics — like the second boss that has you jumping around bounce pads on a giant clock. 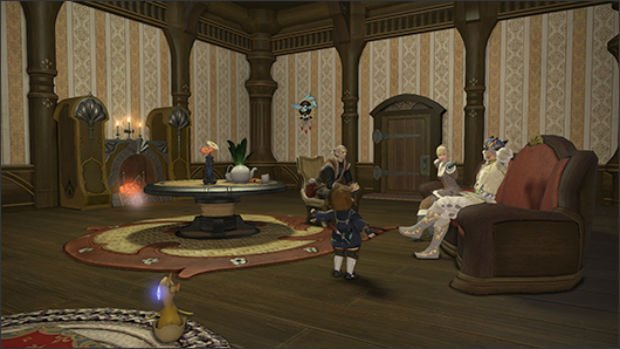 Just like when Crystal Tower was first introduced, you can only receive one piece of loot per week, which includes the all-new Unidentified Tomestone and Oils of Time items, which were previously only available in the highest raid in the game that typically required a static group (my static is currently working towards Turn 7). What Square Enix has basically done is allow newer players an easier way to gear up, to prepare them for future patches. Although many will view the “one per week” limit as withholding, it’s definitely a fair way to ensure that everyone gets something they really want instead of rolling against everyone else, and there are plenty of other ways now to get better gear — like the hunts.

Hunts are by far the most impactful addition to Final Fantasy XIV, and many players are already debating whether or not it made toomuch of an impact. In short, there are now three ranks of enemies that can randomly spawn throughout the world: B rank, A rank, and S rank. B ranks can be killed by just a few people, A can be soloed by a small party, and S needs roughly 50-100 people depending on the boss to down it. Essentially, they’ve added an Odin or Behemoth-like encounter to everyzone in the game, which makes things incredibly exciting when people start yelling and working together to band players to locate them.

Of course, this has led to a gaming of the system of sorts, where top-level players are setting up hunting linkshells (in-game chatrooms), guilds (called Free Companies), and even off-site voice chats to coordinate hunting around the world. If you’re a casual player, you likely will never make use of the hunt system, since every veteran hunter will clear them and alert 50 others to a monster’s presence before you get a chance to get credit for the kill. 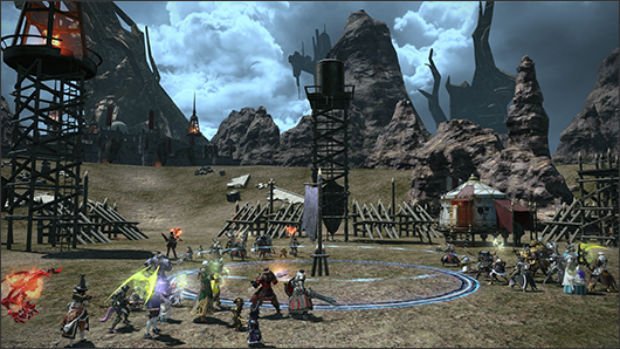 To be clear, none of these hunt marks are instanced, so you have people trolling others and pulling them just to mess with people, or groups that secretly kill B and A ranks to ensure that they get full credit for the clears. The rewards are so massive that if you’re an efficient hunter, you can get pretty much everything you need without running dungeons.

Personally, I’m one of those players who chose to unite with others for a common goal, but Square Enix really needs to buff the health of every hunt enemy outside of S-ranks, or the Hunt system will fall by the wayside and into an abyss of hardcore-only players. Currently, it is not being used as intended, and many players have given up on it all together. This doesn’t gel with the inclusive philosophy of Final Fantasy XIV, and needs to be changed as soon as possible — personally, this was my only big problem with patch 2.3 so far.

Based on my current tests 2.3 isn’t a mind-blowing patch, but it nonetheless offers up more great content that should keep people playing for quite a while (how long they stick around until 2.4 though without another real raid, I’m not entirely sure yet). The real key is that everything is viable in terms of earning end-game tokens for top-level gear, so you can choose the way you want to play and not feel like you’re going at a snail’s pace.

Stay tuned as I make my way through the sidequests, try out chocobo raising, play more Frontline, work on downing Ramuh Extreme, and test out some of the other features for an extended time.