When manyWarcraftfans hear the nameNaxxramas, it conjures up memories of late nights and pizza, while taking on the tough-as-nails raid inWorld of Warcraft (or as I know it, Naxx). It was one of the most enjoyable areas of the franchise lore-wise, as it focused on some of the more nefarious villains in the series’ realm.

Archlich Kel’Thuzad returns as the big bad in Hearthstone: Curse of Naxxramas, but you won’t be able to fight him right away. Yep, that’s right, each “wing” of the DLC will unlock over the course of five weeks, and although the first wing is free, each wing will cost in-game currency or real money.

It’s an interesting way to deliver DLC, and so far, it’s more than enough to get me back into Hearthstone. 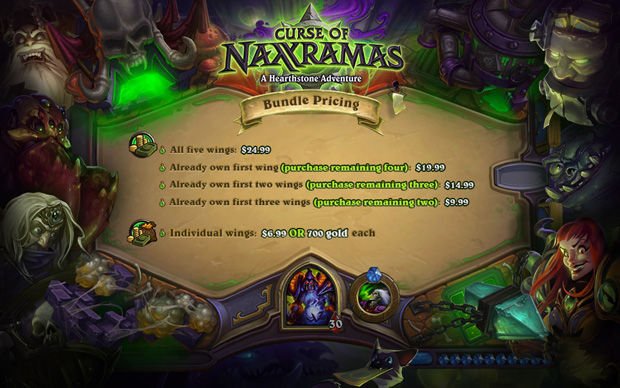 After you’ve unlocked all nine classes, you can enter the solo adventures portion of the main menu and start your quest into Naxxramas. There’s five wings, and as previously noted, only the first is unlocked right now for free (for a month) — the rest will unlock over the course of the next month or so. The pricing scheme is very simple: for each wing, it’s 700 gold, or roughly $5 per wing, not accounting for discounts. When all is said and done, all of the content will be available on August 19 for $20 if you picked up the first one free.

The good news is this slow trickle of content doesn’t really sting, since you truly do have enough to play around with for an entire week. The idea is that it’s a single-player affair, but it allows you to add cards to your deck, which will no doubt lead to tons of deck re-working and lots more general play. You’ll do battle with three bosses per wing fromWarcraftlore like Anub’Rekhan with small voiceovers and a tiny narrative that adds a different feel to the DLC. There’s also a new playing board environment to click around in (or tap), which does a decent job of differentiating the adventure.

Even if you’re a hardcore player who has lots of cards, Curseis going to offer up quite a challenge (mostly on the enhanced difficulty level), which is good news if you’re bored of beating down the arena and the AI. Each enemy has a unique hero power, some of which border on the broken (the first boss can summon a 3/1 minion for the same cost as a Paladin 1/1 hero power minion), and most of the cards will force you to rethink everything you know about the current meta.

Inline with the death theme, lots of cards focus on deathrattle and self-damage, making them risky endeavors, but still extremely effective methods of dealing damage to your enemy. Like Warlock cards they tend to have some sort of downside, but have a low mana cost — so expect to get pummeled right out of the gate. While you could generally beat CPU opponents in the past by throwing the book at them so to speak without any major changes in strategy, you’ll have to rethink everything if you want to clear Naxx and earn your reward.

There’s also a challenge mode to engage in for each class, as well as normal and heroic difficulty settings — the latter unlocks after your first clear of each wing, and is definitely worth playing over again. What you get out of it after all is said and done is 30 cards (across all five wings), a nifty card back, and a guaranteed legendary card with each unlock.

It’s not the most amazing set of rewards for a DLC, but for $5 a pop, you’re really getting your money’s worth if you partake in at least two or three full playthroughs for each wing. Plus, dedicated players will be earning the necessary gold to unlock them for free anyway. 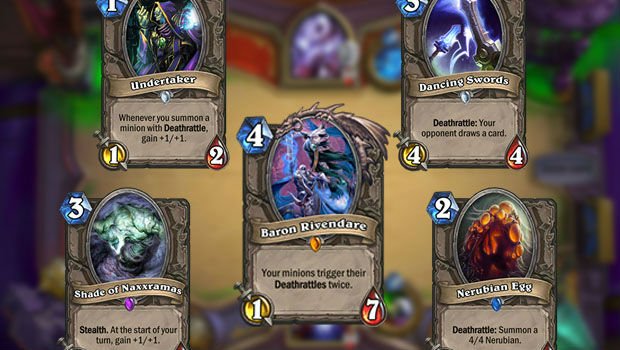 Hearthstone: Curse of Naxxramas is a cool add-on so far that gives hardcore players a lot more to do. Not only does it offer up challenging fights with characters fromWarcraft‘shistory, but it also kicks off with a free initial taste and some very interesting cards that will mix up the overall meta for weeks to come. I’m looking forward to seeing what the rest of the DLC can do once Blizzard starts charging money/gold for it.