Tangled up in blue

Risk of Rain 2 is back on the menu! Hopoo Games added a new stage, boss, and survivor this week as part of the Scorched Acres update – the first significant milestone on the Steam Early Access title’s content roadmap. I didn’t know how much I needed to play as a half-plant, half-robot hybrid until now.

That’s the gist of the new unlockable character, Rex. He’s all about ensnaring enemies, drawing health, and launching rapid-fire mortar strikes. Rex is a bit slow-going at first, but once you find a groove with his cooldowns – and especially if you’re playing Risk of Rain 2 with others – he’s a fun little bugger.

As shown in this ability breakdown screen, Rex’s two most impactful abilities both cost a slice of your health to initiate. Seed Barrage, the aforementioned mortar, costs 15% of your current health but does 450% damage and it has a ridiculously fast cooldown. Paired with Tangling Growth, it works wonders.

The latter ability costs 25% of your current health, but to make up for that fact, it roots nearby foes for 200% damage while also healing you for every target. If a critter wanders too close, it’ll be pulled in.

The idea is to launch Tangling Growth at pivotal moments when multiple enemies are bunched together so you can soak up enough health to not only get a return on your initial health investment, but also launch Seed Barrage in quick succession to melt priority targets. Positioning is everything.

Rex’s basic attack also heals (it’s a three-fire burst and the last hit heals 30% of damage dealt), and as a final fun bonus to his kit, his Disperse ability can send creeps flying into canyons and it’ll rough up aerial enemies if you knock them into a wall. Also, when Rex sprints, he burrows. It’s a great animation! 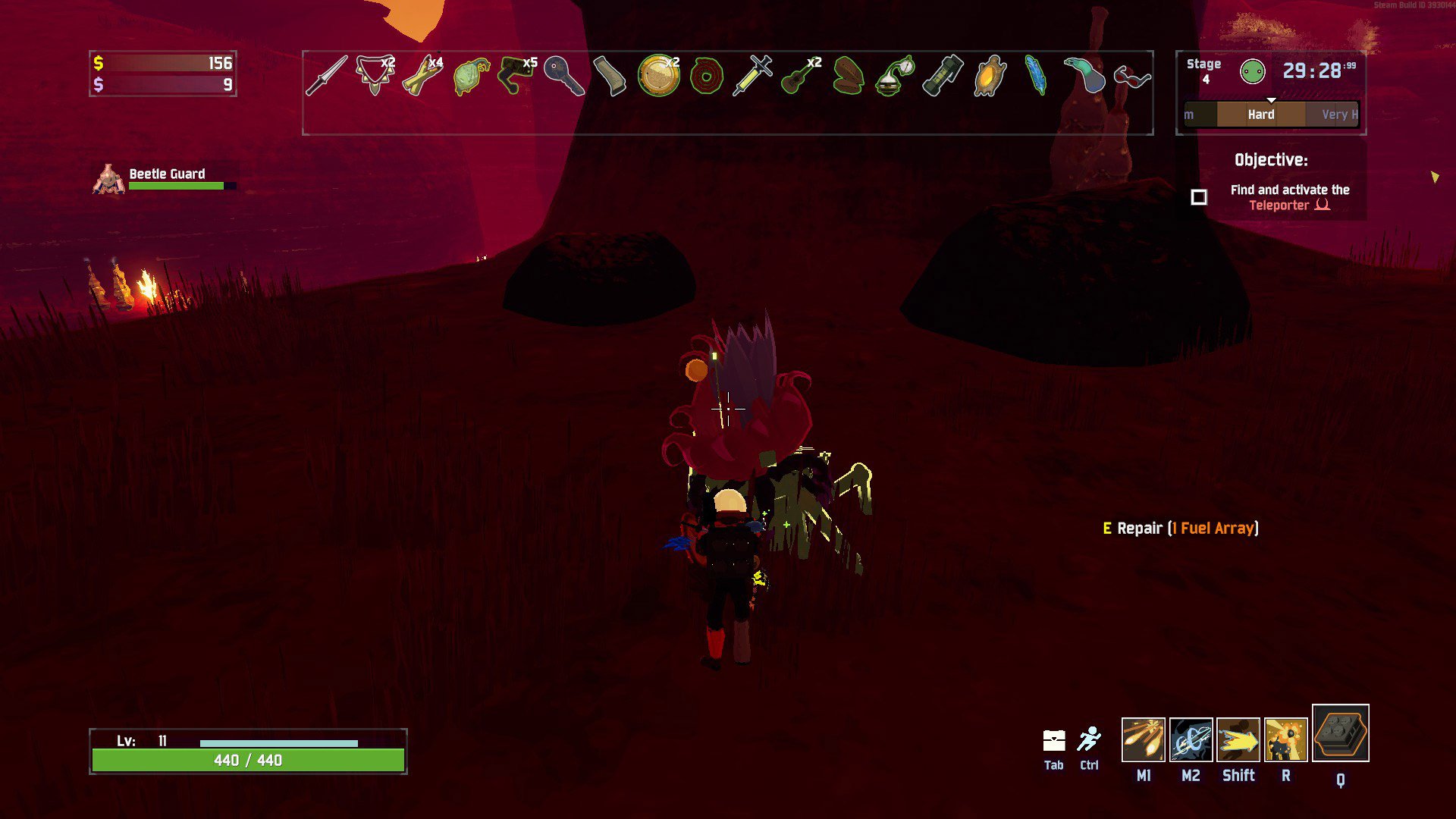 But before you can jump back into Risk of Rain 2 and use Rex, you’ll need to unlock him. Just set aside some time for an easy run. I was rusty as hell and took about 30 minutes. Here’s the rundown.

At the start of a new run (choose anyone other than MUL-T), grab the Fuel Array from the back of your drop pod and keep it equipped until you make it a few levels further, to the Abyssal Depths. As long as your health stays above 50%, you’re golden. Once you’re in the Abyssal Depths, it’s only a matter of finding Rex – use steam vents to reach the upper area shown in my screenshot – and repairing him.

The Scorched Acres update also includes a new stage (of the same name), the Grovetender boss, high-level elites (Malachite) that can disable healing, and assorted new items like the War Horn, Old Guillotine, and Aegis. It’s nice to have another zone, particularly one that’s easier on the eyes.

The next stop on the Risk of Rain 2 roadmap won’t be until later this summer, so I’ll cherish this update while I can. If you aren’t playing this yet and you like roguelike action games that start you off feeling puny but eventually let you go mad with unbridled power, look no further. I’m not one to buy into Steam Early Access titles if I can help it, but what’s here is already fun and worthwhile. Good job, Hopoo.