Given my taste in games these days, I should have been able to get into Rogue Legacy.

It contains most of the elements I look for in this new generation of roguelikes which may or may not actually be much like Rogue, but for reasons that remain a mystery, the experience never fully clicked. I like what I’ve played of the game — which is admittedly not a whole lot — but I’m also happy to let Rogue Legacy just sit in my Steam library unnoticed. Disappointing, but plenty of you did enjoy it and there will always be others for me. This style of game is decidedly “in” right now.

The last roguelikes I got heavily invested in were The Binding of Isaac and Spelunky. I’m talking hundreds and hundreds of hours between the two. And that’s nothing compared to people out there who can boast four-digit hour counts. I’m certain they exist. While it might be too early to call it now at only 27 hours of play (“only”), I’m going to do so anyway; I think I’ve found my latest obsession, and it’s one not nearly enough of you are playing: Risk of Rain.

In an effort to help change that, I’ve examined why I find this game so compelling. 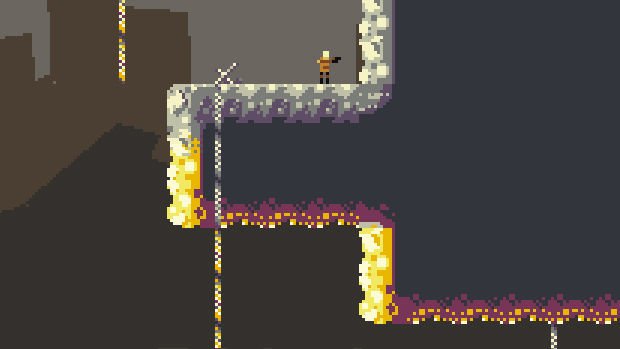 Risk of Rain isn’t an easy game, but it sure is easy to get into. This is a combat-centric platformer at its core and controls as such. You’ve got a main attack, a few more that have cooldowns, and the potential for a single “use” item. The basic movement and abilities are intrinsically enjoyable, which is crucial for lasting appeal. The actual roguelike aspects — randomization, permadeath, etc. — aren’t worth a damn if the foundation they’re built on isn’t well made.

I’m also fond of the way in which levels are completed. You’ll appear on a level in a random location, as will a teleporter. This is what you’re attempting to find, but along the way you’ll pick up items that grant a wide range of passive abilities or otherwise help with survivability. After reaching the level’s teleporter and activating it, you’ll need to survive for 90 seconds as a boss and hordes of creatures attempt to wreck your day. Once the timer is up, you just need to clear the map of any stragglers and you can finally teleport to the next level. Simple as that. Well, not quite… 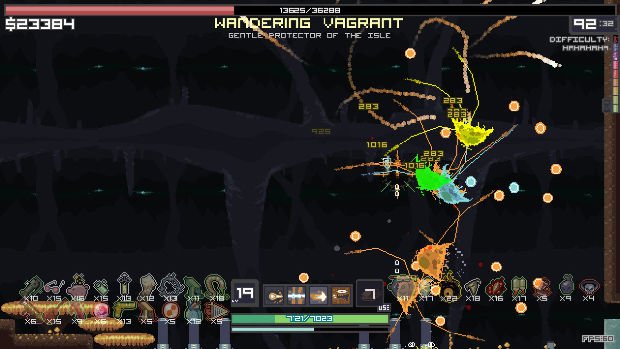 One of the more novel concepts found in Risk of Rain is the way it handles difficulty, which increases the longer you play. The amount of time you’ve spent on your current run appears as a dedicated element on the heads-up display. As seconds are added to the clock, a tiered meter fills up and each new tier represents a greater challenge — more enemies, tougher enemies, and eventually bosses that appear with the regularity of lesser foes.

Simply put, there’s no screwing around in Risk of Rain. The pressure is on to always be doing something productive, to never stand still, but if you charge ahead prematurely without enough gear, you’re potentially setting yourself up for failure. This mechanic helps keep the game feeling dynamic and interesting on repeat playthroughs and greatly complements the randomization of items, enemies, and stages. I’ve never seen anything quite like it.

The final difficulty tier, by the way, is called “HAHAHAHA.” 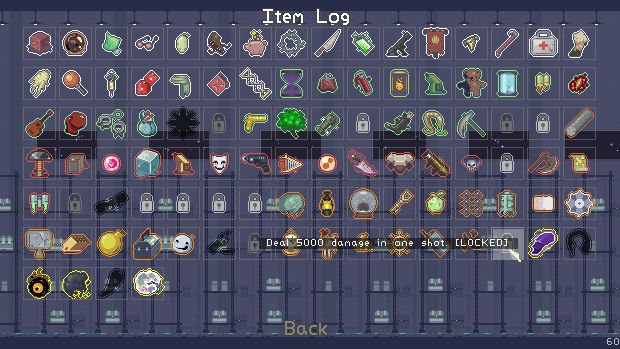 It used to be that if a game forced to me to look at a guide, there was either something wrong with its design or I was too impatient to figure out whatever it was I was stuck on. Nowadays, I tend to look at the existence of a game-specific wiki as a positive thing. Risk of Rain is no exception.

There are tons of items to earn, characters to unlock, and secrets to find which will keep you coming back. In particular, I’m a huge fan of the way new items are tied to achievements.

One challenge has you taking down a boss with less than 20 percent of your health remaining, while another requires you to find and maintain four drones simultaneously. These are varied, and usually fun to attempt. There’s also enough of ’em that you can keep them on the back of your mind, ensuring that even if you don’t “beat” Risk of Rain, you can still make progress on any given run. Completing a challenge will introduce a specific item into the pool of items that can potentially appear in a level, meaning there’s a real affect on gameplay.

Some characters are unlocked in a similar fashion, while others are merely hidden in certain levels. I quite like how each class has two unique challenges associated with it, encouraging you to try out everyone and at least attempt to master them. Better yet, even if you don’t like a character, the pair of items you’ll unlock for beating their challenges will be beneficial — items aren’t class-specific, thankfully. And then there’s the Monster Log.

Yep, Risk of Rain has a bestiary whose entries are collected as item drops. It was love at first sight, thanks for asking.

There’s an impressive ten playable characters. You start off with one, the Commando. He serves as a great introductory character, with easy-to-grasp abilities like 1) shooting, 2) shooting that pierces, 3) rapid-fire shooting, and 4) a roll that dodges attacks. By the time you’ve grown accustomed to Risk of Rain‘s aforementioned systems, you’ll be ready to try out a new class and will have probably unlocked one already or at least possess the skills to do so.

The variation between the different characters and their abilities is such that there’s something for everyone. Some are melee-focused, while others excel in ranged combat. Some are highly technical; a few, not so much. My favorite, the Huntress, can attack while moving at full speed, which is perfect for kiting enemies. When the Bandit kills an enemy with his high-damage Lights Out ability, all of his cooldown timers reset. He’s neat. So is the Sniper, who can charge a shot for up to 2,000 percent damage.

While there are a couple of characters I’ll happily avoid playing as again, a substantial amount of care went into each and every one, and it shows.

Not enough games support cooperative play both locally and online. 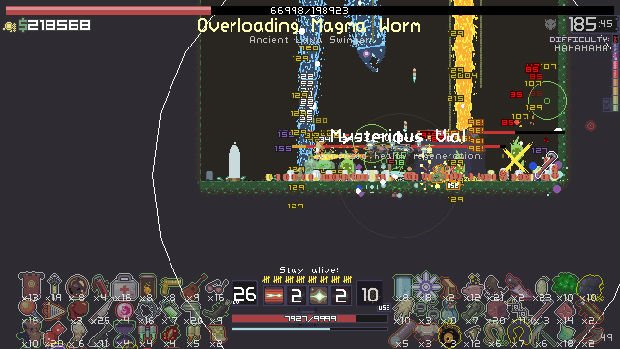 With enough practice, patience, and good fortune, it’s possible to become a total badass in Risk of Rain. Given that the rising difficulty does eventually top out and you have the option of continuously teleporting to new stages instead of going to the final one, it’s possible to become a walking (or hovering, as it were) instrument of destruction.

There’s essentially no limit to the number of items you can acquire, and boy do they stack in interesting, powerful ways. Fellow Destructoid editor Conrad Zimmerman, who is responsible for turning me on to this game, played a three-hour-long run on New Year’s Eve that was mental. I couldn’t even comprehend what was happening on his screen by the end of it. Having since tried a similar run, I must say, it’s hard to stop once you’ve hit that magical two-hour mark.

To give you an idea of what’s achievable in Risk of Rain, take a look at this:

[.gif by animatorZed on Steam]

Do yourself a favor and buy Risk of Rain. Forget waiting on a sale. You need this in your life.

*I forgot to mention the music until everything else was wrapped up, but the original soundtrack by Chris Christodoulou deserves a nod. It’s good. Shockingly good. Find it here on Bandcamp.