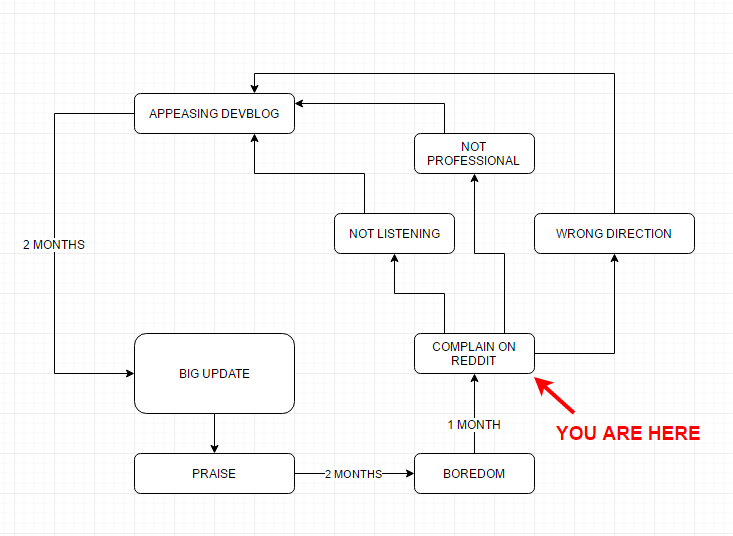 Additionally, Garry offered up an extended comment addressing the chart of the community’s love it, get bored, complain cycle.

I’m noticing a pattern, and we need to address it. It’s something we need to get past as a community, not only because it’s getting boring but because it has wider implications.

We’re stuck in ping pong loop. We release an update, you love it for a month, you get bored, blame the system, bitch for a few months, then we release another update – and the same thing happens.

My worry is that this is going to be a constant thing. We’re not going to hit a point where you go – yep – don’t change anything – keep it like it is. Because it’s not that one particular system is much better than the other, it’s just that one is fresher than the other.

So I’m going to make a suggestion.

If you’re bored of the game then just stop playing it. But before you get angry about it consider whether we have given you enough entertainment over the last 3 years to justify pocketing your $20.

I know this probably sounds pretty dismissive, but that’s not how I want it to be. I’m trying to be pragmatic. If you’re interested in the game, if you play regularly and still get enjoyment when you play – we’re definitely interested to hear what you think. We especially love hearing your stories, watching your videos, seeing your screenshots and paintings – all things that this subreddit has been very low on.

If we want to leave Early Access then breaking this loop has to be part of that plan. We have a pretty good idea on how to push forward with Rust, but none of it is going to make the game more appealing to people that have spent their last 1,000 hours hating it.

After skimming responses to the thread it seems like many players seem to disagree with recent changes that makes the game too much of a grind. “You guys have taken this crazy home invasion simulator that rewarded creativity and ingenuity and turned it into a gathering simulator with guns. Creativity and ingenuity are being snuffed out,grindis being increased, rewards are being reduced,” saidoneredditorin response to Newman’s comment. For those that aren’t familiar with these survival games, grinding for resources is pretty much the majority of the gameplay, so if the player base is upset about something so core to the game, seems like something is probably off.

It is refreshing to see a developer be so blunt and forward with the community, versus those who sit back and take a lashing online while being silent. I have to say a lot of gamers could certainly learn from this. I’ve seen this mentality across many game-specific subreddits including the likes of Destiny, Super Smash Bros., and many times Hearthstone. It is hard to say if these communities are just vocal minorities unrepresentative of the overall player base or not, but I’m pretty sure the Destinysubreddit believes it directly controls Bungie at times (I’m joking, mostly).