Also Ibuki is cool as hell, but a bit complicated

Street Fighter V launched four months ago without an actual story mode, save for the individual character prologues that featured Bengus artwork that glued together several fights easy enough for a literal baby to win them. And while Street Fighter V‘s base game makes for a fun fighter, it felt like a huge miss, and might even have contributed to sales numbers stumbling out of the gate.

I played the first of five chapters last week of the full story mode, “A Shadow Falls,” which features an hour’s worth of fully rendered cutscenes alone and an alleged “4 to 5 hour” run time. I’m not entirely sure how the math works there because I cake walked through all these fights same as the character prologues — and I’m not even good at Street Fighter — but there’s also a Hard Mode, so hopefully it, or the later chapters, provide a bit more resistance.

All the characters, including upcoming DLC fighters, factor into the story and are playable. The DLC characters coming across the next few months aren’t final, balanced representations of their eventual selves — Balrog may be a little different from when I played him — but they’re there.

Balrog has literally burst from his sleeves; his default character model wears his boxing cloak, frayed at the shoulder and presumably stuck behind his muscles forever like when you have a ring that will never come off again. He’s there to back up Bison, who’s back and doing evil with seven giant, black death stars floating above major cities like New York and Tokyo. His number two in command of Operation CHAINS, Fang, accidentally let loose all seven hackers holding the chess pieces necessary to activate (?) the giant “Black Moons,” but by first episode’s end he’s already kicked Rashid’s ass to take one back.

The story is all over the place, ping-ponging between major characters and whatever they’re up to at any given moment, allowing you to mess around with different fighters on both sides of the conflict. Ryu seeks out a fight with Dhalsim, for example, trying to stave off the Evil Ryu festering inside him and then Necali shows up to wail on Ryu. 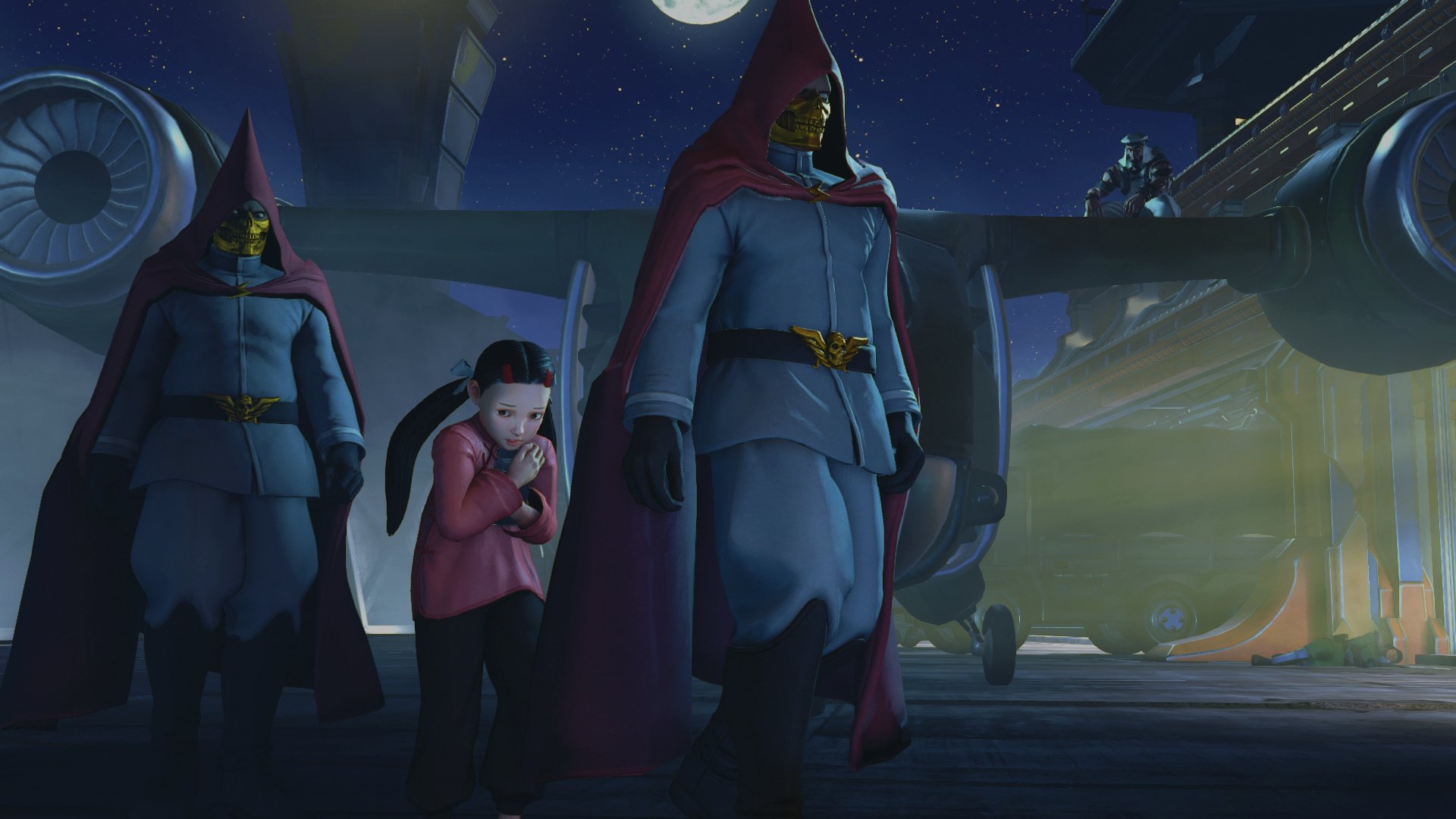 There’s a bit more about Necali, by the way. The “warrior who hungers for souls” shows up when a bunch of powerful fighters get together (in this case, to take on Bison). You also see Nash wake up from the dead, gets teased by a sexy Russian “nurse” in a military uniform, and then he fights Bison’s ghost or his own memory of Bison or something. It’s all zany, silly fun and helps give the cast a little more life — it would’ve been nice to have had it included at the onset. I wanted to mention that Mortal Kombat X managed it, but 1) this one is funnier, and 2) that game also released completely broken on PC, whereas SFV did not. It’s like we have to constantly pick and choose.

I also got to mess around with “everybody’s favorite schoolgirl ninja,” Ibuki, whose move set has seen some serious changes. Thankfully I had Peter “ComboFiend” Rosas to guide me through some of the intricacies with much better dexterity than my giant paws allow. You might’ve noticed from Capcom’s own reveal trailer that the team has decided to “focus on her being a ninja.” Ibuki can “hold” up to six kunai and they have to be recharged (backwards fireball) when you run out. The number you recover depends on how long you hold and you’re able to throw them in varying amounts and at different angles depending on your button presses.

Ibuki “can play the ranged game,” but she’s mostly about combos and high damage output (though she’s equally fragile to make up for it). Rosas explains that she’s “more about trickery…about switching sides and going behind you.” She has a dash that can stop right in front of you, or phase through you and her V-Reversal has you striking an anime staple log as she disappears in a puff of smoke. Her critical art (super move), which hits on a low forward slide, is based on ninjitsu. Perhaps my favorite thing about her unique move set, though, is her V-Trigger, which throws out a bomb with three different fuse timings. It lets Ibuki players get real tricky with spacing and timing and you can even throw your opponent onto the bomb to bounce them up in the air, from which point you can unleash all manner of juggling combos.

If the bomb is on a longer trigger, opponents can hit it back in her direction, but it will never damage her, and she can hit it right back towards them or toss a kunai to manually make it explode. While I came away from my time with Street Fighter V‘s next big additions happy they’re adding a goofy ‘ol story mode, I’m almost more excited to see high-level, tournament Ibuki play and marvel at people whose finger tendons are precise, taut and not crumbling like dried out rubber bands.