There’s a full musical number and everything

I’ve played and enjoyed all of the Saints Row games to date, but wonder how much longer this can last. How much more ridiculous can the series get, and even if there is room to up the insanity, do we even want that? Where Volition goes from here, I’m not sure.

Gat Out of Hell, a standalone expansion, will give the studio some breathing room to figure that out while keeping the series on store shelves. As will Saints Row IV: Re-elected, a “Game of the Year”-style re-release for Xbox One and PlayStation 4. Both are due out January 27, 2015.

I played a brief demo of Gat Out of Hell at PAX Prime over the weekend and spoke with studio creative director Steve Jaros about how the game is influenced by Disney films. Yes, really.

In Gat Out of Hell, your player character from Saints Row IV, the President, is pulled into hell to marry Satan’s daughter Jezebel. The devil believes the Saints boss to be the most dangerous person alive — a perfect general to lead his army against heaven — but Jezebel isn’t interested.

Johnny Gat and Kinzie Kensington journey to hell to save their fearless leader and from there, it’s up to you playing as either character (or both, in co-op) to wreak havoc however you see fit. Perhaps you’ll use some of the ridiculous new weapons based on the seven deadly sins. My favorite one shoots locusts, which is almost as good as a gun that fires bees. Almost. 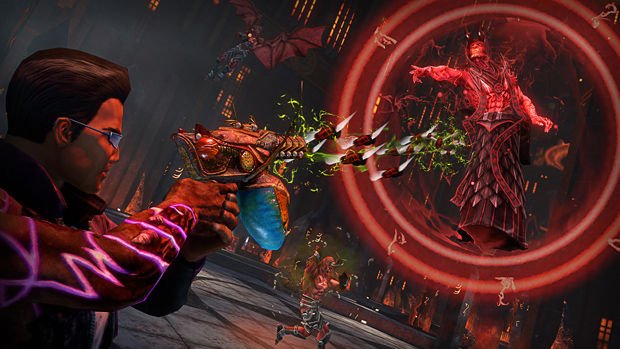 You’re meant to run around — or fly; you have wings — and fill up a piss-off-Satan meter at which point the story will unfold as various milestones are met. Gat Out of Hell features historical figures and even characters from past games, including Dane Vogel and Dex, plus “well over 30 instances of open-world things to do,” according to Jaros.

After reaching 100 percent completion on a given island of hell, you’ll be rewarded with an epilogue relating to its central character — like spymaster general William Shakespeare, for example. Completionists will also be able to unlock a “crazy epilogue” for the full story.

Asked if Gat Out of Hell was considered canon or if it’d have an impact on the series’ story going forward, Jaros just kept saying “I recommend that you play it” with a smile on his face.

“It is not a Saints Row V. It is not a sequel,” he said. “It’s a fun thing for our fans. A new place to go and play around with super powers. Another city to go and terrorize. [A chance to] play as a character that people really seem to dig, and just have another excuse to have a lot of fun and do some shit that we’re able to get away with.”

Okay, so about that Disney connection.

“I’m pretty certain that we’ll be the only open-world game that comes out with a full-blown musical number in the middle of the critical path,” Jaros told Destructoid.

“One of the things that we lean on [heavily] for inspiration for this is Disney movies. I’m a big Disney fan. For instance, if you remember stuff like in Sleeping Beauty or Cinderella, the beginning of the movies [have] the ornate story book that opens up. It’s illuminated text and story-book pictures, and a narrator — that’s kind of our story structure. Jane Austen narrates you through this fairy tale; Jezebel is very much a sort of Disney princess.”

The creative director made it clear that “It’s not a parody of Disney at all, but it echoes some of those themes.” There aren’t any talking animal buddies here, but Gat does have a talking gun who wants to help him become the ultimate killing machine.

Basically, Gat Out of Hell is what a fairy tale would look like in the Saints Row universe.