Hail to the chief

The Third Street Saints are on the rise. Once a lowly street gang from Stillwater, the crime syndicate achieved celebrity status in conquering the burgeoning metropolis of Steelport. Now, you, their intrepid leader, have inexplicably captured the presidency. Everything is gravy. Well, except for that twenty percent approval rating. Also, there’s an armada of aliens bearing down on the capital and snatching people up like it’s War of the Worldsor something. Maybe it’s time to kick some extraterrestrial ass. Because ‘Merica.

Saints Row IVis still as juvenile, irreverent, and hilarious as ever. And it feels pretty amazing too. Over the past few days I’ve had some time to go hands-on with a preview build of the game featuring what’s ostensibly the game’s opening hours and thus far I’m having an absolute blast. 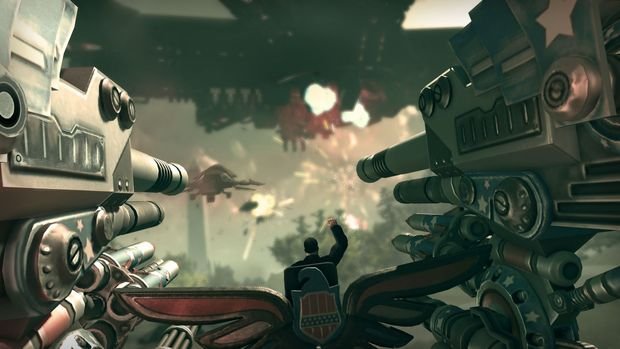 We’vepreviously coveredthe title’sbasic premise and gameplay quirks, so I’ll refrain from beating a dead horse. Suffice to say, fans ofSaints Row: The Third should be pleased. It’s pretty much the same as its predecessor with a few subtle enhancements and touch of inFamous thrown in there for good measure. That’s not a bad thing. Not in the slightest.

One of the things about Saints Row IV that really grabbed my attention was the number of film and pop culture references the designers have managed to cram into the game. Within the first few minutes of playing the game there’s a Medal of Honor-esque mission (complete with copious amounts of door breaching) named for Zero Dark Thirty.

That’s immediately followed up with a fistfight reminiscent of the final scene of Terminator 2: Judgement Day wherein the player knocks an assailant into a vat of molten steel. Moments later, the protagonist is inexplicably attempting to disarm a nuclear warhead as it hurtles through the air. A scene of self sacrifice, it evokes Bruce Willis’ performance in Armageddon thanks to Aerosmith wailing “I Don’t Wanna Miss a Thing” in the background.

It doesn’t stop there. As the protagonist’s new-found super powers are gradually introduced, the game will whisk the player away into training rooms akin to those in The Matrix. Let me just tell you now that leaping hundreds of feet through the air from the top of one skyscraper to another is an incredible rush. Soon after, you’ll escape from a virtual world through a door only to wake up in a stasis pod aboard an alien ship. In making your escape, hanger bay doors will slowly close around your vessel as Keith David compels you to “stay on target” whilst suggesting you “do a barrel roll.”

Oh, right! Following in the footsteps of Steelport Mayor Burt Reynolds is sultry-voiced actor Keith David, who turns in a remarkable performance in his portrayal of Keith David. It’s pretty great. The star power doesn’t stop there, though. Oh no! The character creator features an optional vocal track delivered by none other than famed voice actor Nolan North. Because of course it does.

It all just goes to show how self-aware the team at Volition are. In addition to the ridiculously entertaining gameplay, the writers are constantly working to parody everything and anything. It doesn’t always hit the mark butSaints Row IV will surely glean at least a few smirks and chuckles from players as they run around a virtual Steelport at the speed of sound, blasting foes with dubstep guns en route to fighting the alien menace.