There’s a fantastic stealth game in there somewhere

Frozenbyte really doesn’t waste any time, does it? Less than a year after Trine 3 was released, the developer is back with timey-wimey stealth game Shadwen.

Unfortunately, while it shows promise, maybe Frozenbyte is a bit too eager to get this one out. 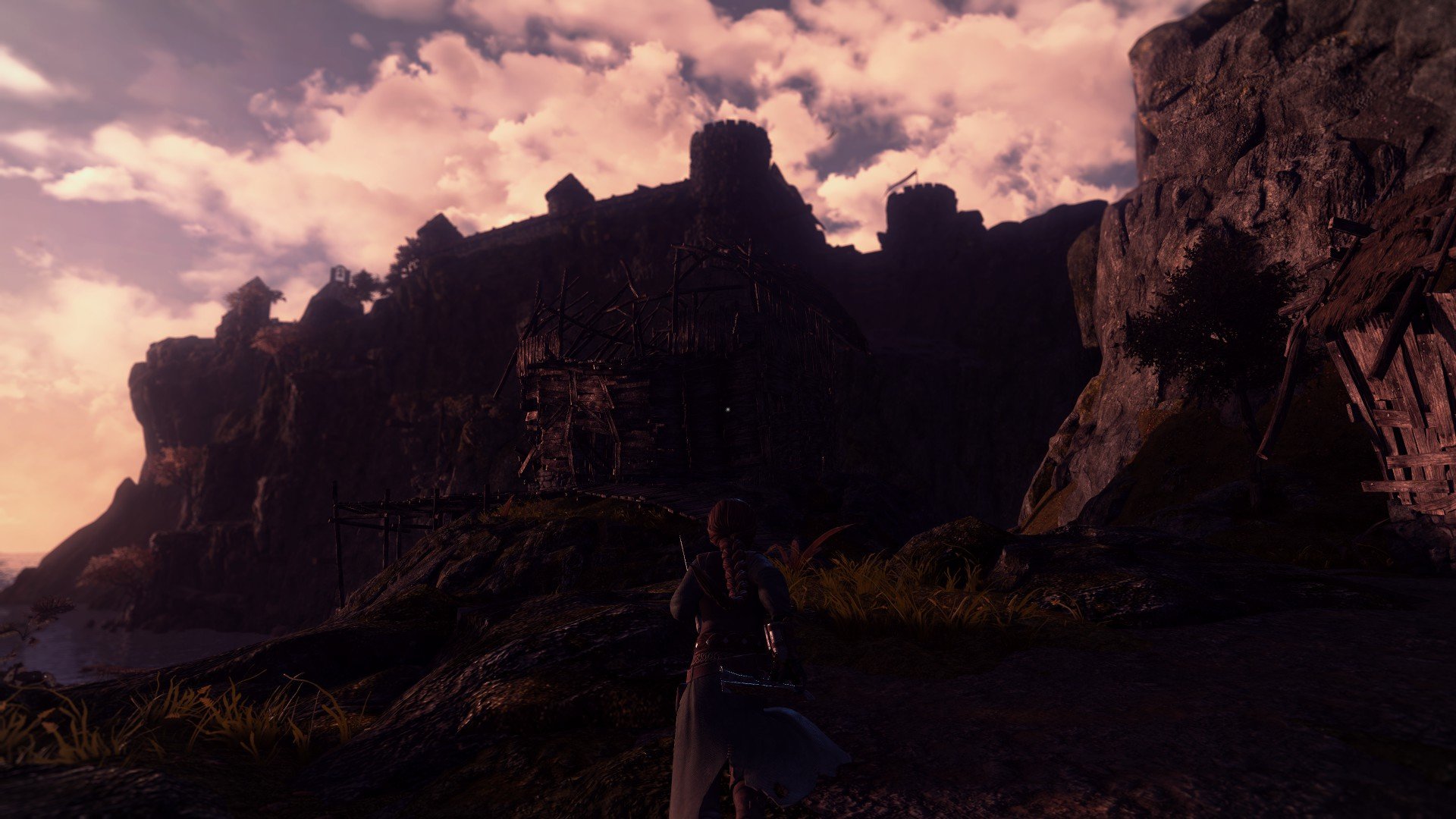 Shadwen takes place in a famine-ravished city that’s recently been occupied by an enemy, and it’s up to skilled assassin Shadwen and a small orphan girl named Lily to sneak through it and put a stop to the king. It’s a lot darker than Frozenbyte’s most well-known series. Gone are the campy and bright characters of Trine; Shadwen is gruesome, blood-thirsty, and gritty.

Each level has the same basic goal of getting to the end of the level undetected by any means necessary. Lethal and non-lethal options are available, but there’s a catch: Lily has to come too. Fortunately, she can’t die and can even easily squeeze through small gaps to help out, but she can be scarred for life if she sees a dead body, changing the direction of the game’s story.

One of the areas where Shadwen does best is in its world-building. While the immediate plot and cast are pretty naff, and I really struggled to care about a six-year-old’s ponderings on the intricacies of good versus evil, the world everything happens in is fascinating. I’d love to see more of the city, how the famine has affected things, and the obvious tensions between the social classes. I want to explore the reports of spirits attacking soldiers, and delve deeper into the fantastical elements sat just beneath the surface.

There’s so much that’s simply hinted at that I often found myself sat in a bush for far too long, just to hear what the guards were chatting about. I hope Frozenbyte builds on the lore of Shadwen, because what’s there is both special and criminally underutilised. 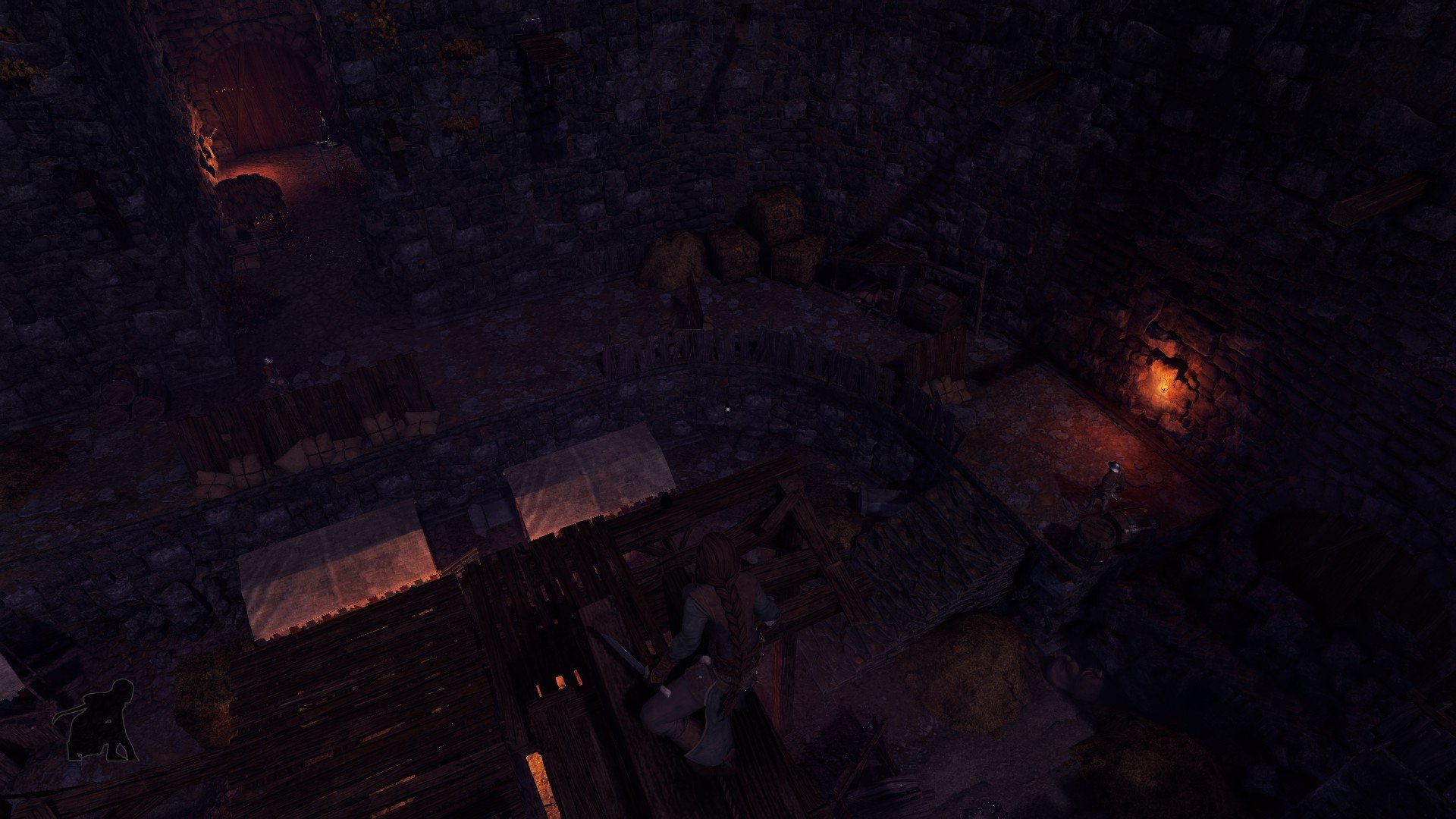 The central gameplay hook of Shadwen will sound familiar for those who’ve played Superhot: time only moves when you do. This gives you the freedom to assess your situation, find hiding spots quickly, and plan exactly how you’re going to deal with the guards between you and the exit. On the off-chance you get caught, or want to try things a bit more cleanly, there’s also the ability to rewind time to undo any mistakes you might have made.

Shadwen also has various gadgets and tools at her disposal, each of which can be crafted by finding components scattered throughout the levels. Predominantly, she has a grappling hook to help navigate the terrain and pull over crates and barrels to cause distractions, and on the whole is a hell of a lot of fun. There are also mechanical balls to pull guards’ attention away and various mines to clean out more deeply entrenched guards if the need arises.

When written like this, Shadwen sounds really cool. It’s an unforgiving stealth game with a highly mobile, time-bending protagonist, which sounds like a recipe for success if the likes of Dishonored is anything to go by. Unfortunately, the game’s due out this month, and right now it’s difficult to deny that it feels very, very rushed. 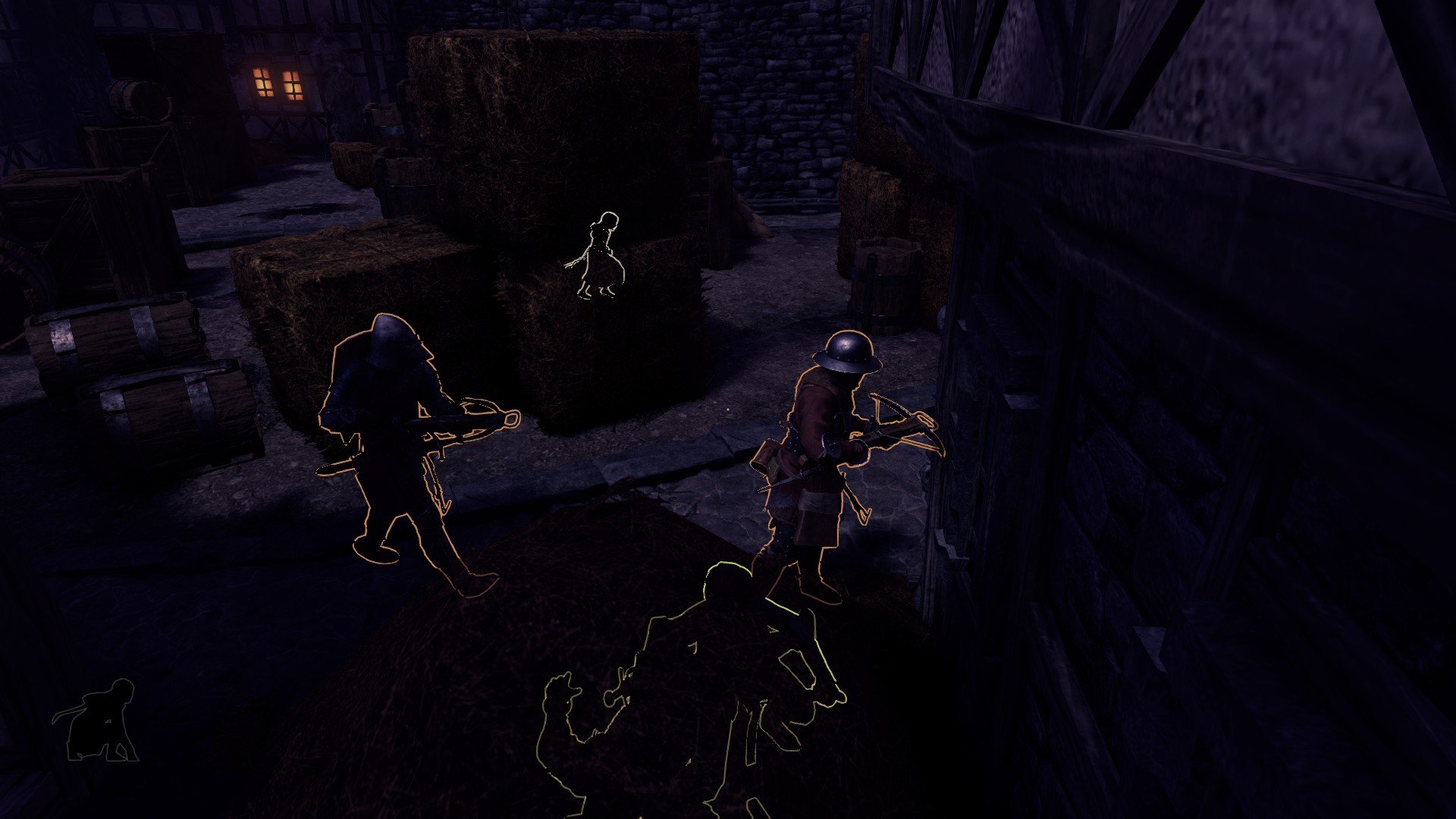 Firstly, the time control mechanic isn’t put to good use. While Superhot’s system was deeply involving and fun to play around with, Shadwen’s approach to the idea often borders on the annoying. All of the AI and physics require you to hold down the make-time-work button for things to happen, and that constantly devolves into just waiting. Carting Lily from hiding place to hiding place, waiting for guards to shift out of the way, waiting for environmental objects to topple over… all these things take inordinate amounts of time and having to hold down a button to make anything happen at all just adds to the frustration.

This problem’s exacerbated by the AI. While AI is one of the things I could easily see being improved for the final release, right now it’s just not up to scratch. Guards will detect and kill you almost instantly if so much as one of Shadwen’s toenails falls into their line of sight, and they all seem to have super hearing, able to pinpoint Shadwen’s footsteps from miles away (even if I couldn’t hear anything).

The guards aren’t the main culprit here, though. It’s Lily. If she thinks she’s being seen by a guard, even if it’s one on the other side of the map who isn’t paying attention, she’ll run all the way back to her initial hiding place, instead of taking cover close by. Getting so close to dragging her through a level only to see her get spooked and flee all the way back to the last haystack can be absolutely infuriating.

Pressing the T button will prompt Lily to move to an indicated location, assuming she can get there unseen. It’s really handy if Shadwen needs more time to clean up the corpses to prevent Lily from being traumatised, but the system is janky at best. Lily will turn around and run straight back to you once she gets to her location like a puppy playing fetch, meaning that making sure she’s doing what she is told is often a bigger and oh-so-much more irritating challenge than avoiding the guards. 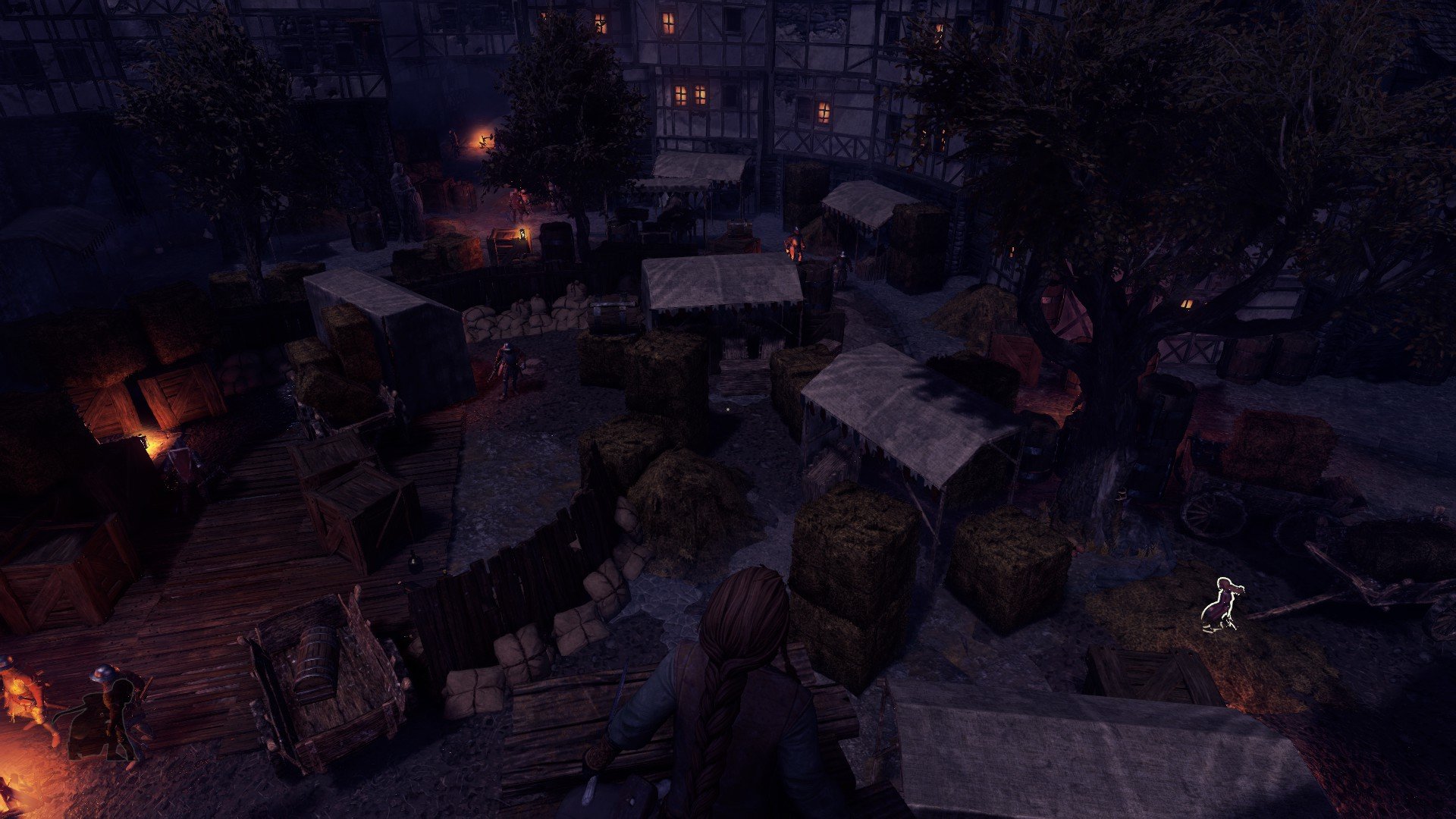 The level design is a mixed bag. Sometimes areas can be huge, sprawling, vertical spaces with lots of alternate routes to traverse and places to explore, and when they are the game really starts to show promise. A particularly good example sees Shadwen grapple and swing around a gigantic lift/crane/thingy to clear the way for Lily, and the mixture of acrobatics and stealth play off of each other fantastically.

On the other end of the spectrum are the far-too-frequent linear paths conveniently scattered with barrels to yank and hay bales to hide in. In these areas, the tactics employed amount to not much more than “find the barrel, give it a tug, let Lily run past, repeat.” All the smart usage of verticality and the open-ended ways of tackling a stage are completely scrubbed away, letting the other problems with the game rise to the surface.

The repetitiveness doesn’t stop at the level design, either. In the 11 missions I’ve played so far (out of 15), I’ve encountered a grand total of 2 types of enemies. If it isn’t a standard guard stood next to a stack of identical crates, it’s a heavily armoured enemy standing next to a haystack. The entire game lacks a certain level of depth which is required for a decent stealth title, and everything just blended into everything else until I was simply bored with what I was doing. 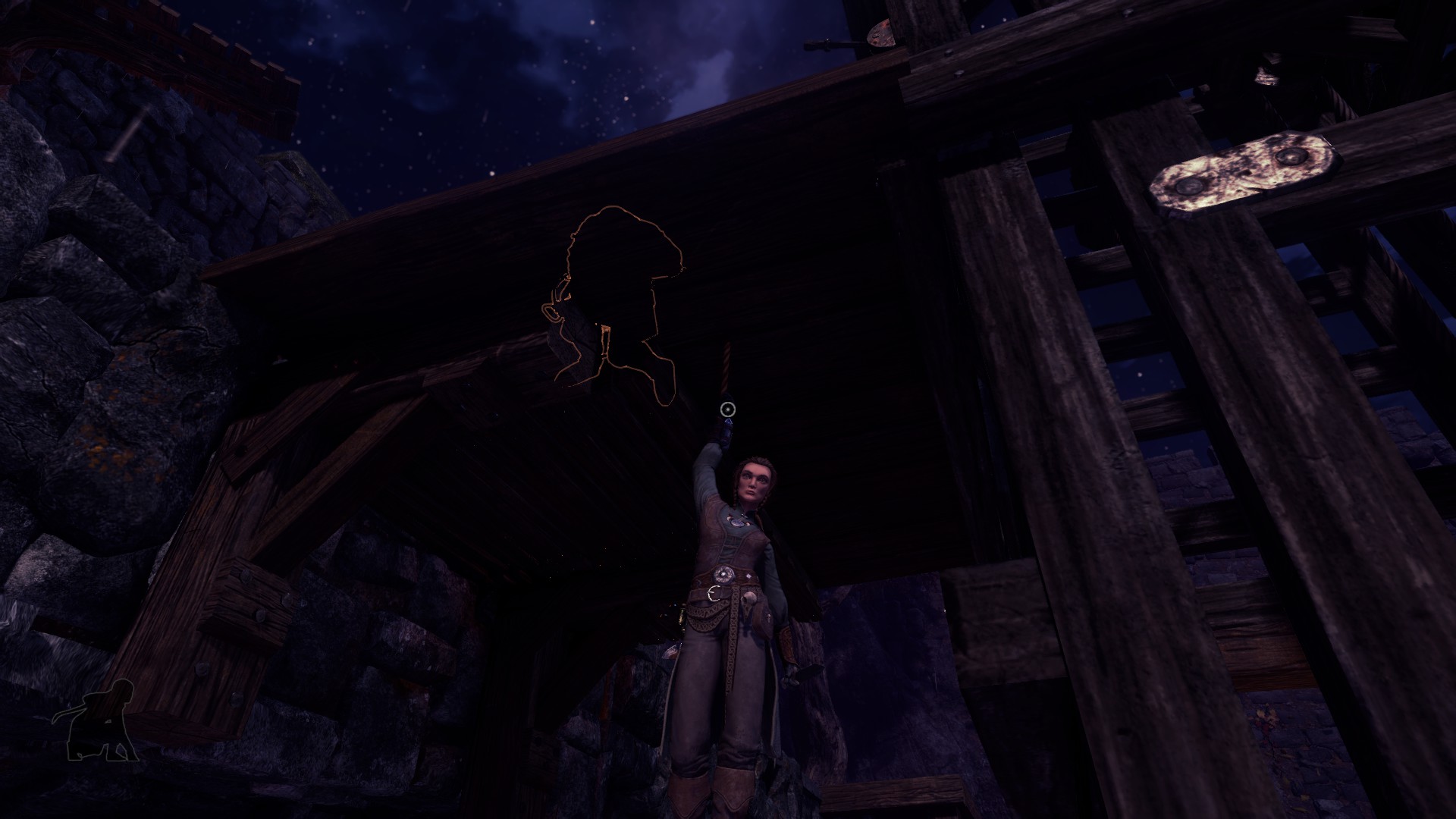 Shadwen is not a finished game, and as what I played was considered a preview build, I wouldn’t expect it to be. There are glimmers of genius to be found, with some examples of impressive level design, world building, and satisfying mobility giving the suggestion of a stealth game that could be something really special. When it gets good, I really struggled to put Shadwen down.

However, Frozenbyte’s previous game, Trine 3, only launched last August to middling reviews, and Shadwen is due to release this month for PC. With a frequent reliance on incredibly linear areas, a lack of variety, and poor AI all around, it does make me question whether the developer’s plan to release it this month really is a good idea.

I really hope Frozenbyte pulls it off in its planned timescale, but I think a few more months of reworking and polishing could really do Shadwen wonders

[This preview is based on an in-development build of the game provided by the publisher.]