There’s a new Fauxvania in town

Technically, Konami is still making games with some of their classic franchises. They have a new Contra game in the works, a new 2D Castlevania title set for release this year, and last I checked, the servers for Metal Gear Survive were still up and running. That said, all three of these titles are “in-name-only” entries in their respective franchises.

That new Contra is a top-down shooter that actually punishes you for shooting. From all reports, the next Castlevania is planned to be a multi-player freemium mobile title with microtransactions and auto-runner elements. As for Metal Gear Survive,it’s an always online competitive game with little story, developed without the input of series author and creative mastermind Hideo Kojima. None of them are giving the old Konami audience what they want, and that’s all without even getting into other IP that Konami owns like Bonk and Gradius that they haven’t done anything new with for about a decade.

This all leaves a Konami-sized whole in the market that ex-staff and new indies seem more than happy to fill. Kojima’s Death Stranding isn’t heavy on stealth, but other than that, it looks to have everything that Metal Gear Solid fans want. Former Castlevania series producer Koji Igarashi appears to have a heavy metal hit on his hands with Bloodstained, which, despite some technical misgivings, has met with commercial and critical success. The same is true for Joy Masher’s Blazing Chrome, which is the best Contra rebirth since, well, Contra ReBirth. After similar success with the Belmont-flavored Odallus, they seem to be on a roll with their callbacks to that era in Konami’s history.

Effective marketing has helped these games get people’s attention, but there are even more Konami-likes hiding under the surface if you’re willing to dig, like that Gradius-style Super Hydorah from Locomalito, the Maze of Galious–inspired La-Mulana series, and the upcoming Simon Quest: Transylvania Adventure, which might be the most “on the nose” of them all. It may also be the greatest at actually improving on the source material, as opposed to just iterating on it.

For those who haven’t seen it- Simon Quest: Transylvania Adventure is a work in progress parody/homage to ClassicVanias~

Convoluted hints, mansions, and a time system that doesn’t make you wait.

Unlike the second game in the Castlevania series, this quest doesn’t belong to Simon. Instead it tells the story of a man named Simon Quest who is fighting to gain the title of the greatest vampire hunter in the world. There’s just one problem: Dracula was killed by a man named Stan Helsing, Transylvania’s most beloved monster killer. What’s Simon to do except wander the land collecting Dracula’s body parts so he can bring him back to life, kill him again, and prove that he’s actually the best there is at what he does.

At the start of the demo, Simon has all the familiar NES Belmont moves: jump, whip, throw axes, and cross-shaped boomerangs. Things get a lot more interesting after you unlock the ninja headband that allows you to do a power slide into a flying dropkick. It’s a maneuver that some Belmonts have done before, most notably in Smash Bros. Ultimate, but never with this much versatility. This Simon can throw a projectile and drop kick it before it falls off-screen, sending it soaring horizontally at high speed. This new tactile connection to his weapons can cut Simon both ways. Throw a boomerang and fail to catch it on its return trip and it will hit you in the head, doing a tick of damage. 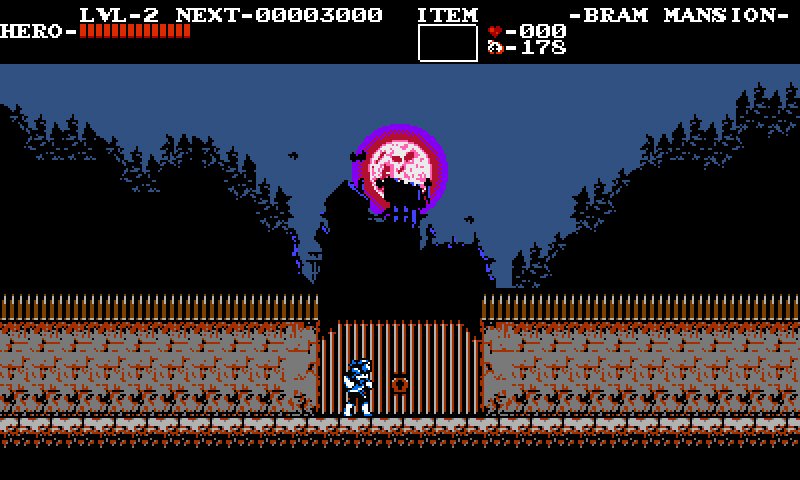 The game’s environments feel alive in a similarly disarming way.During the day, the local town dog will follow you around if you pet him, while at night, zombies lurk the streets like hoodlums, ready to curb stomp your unconscious body to oblivion. All these fun new ideas beg the question: why didn’t Konami ever put these features in their whip-cracking, monster-smacking originals? Nothing here feels beyond what was possible on the NES, so it could have happened. I have to guess it’s because Programancer, the creator of Simon Quest, has the benefit of hindsight and levity in his favor. Like Yacht Club Games did with Shovel Knight, he’s starting off with a shared language that all fans of retro games are familiar with, then finding just the right places to turn that language on its head.

It’s also clear that, like Shovel Knight, Simon Quest is a project born out of pure passion for game making. New content for the demo is being developed all the time, like shields which allow Simon to block flames and other attacks. There’s also a ton of content you can only unlock by entering in secret passwords on the naming screen. It’s rare for a dev working on a project that’s currently a pay-what-you-want proof of concept to concoct updates so frequently. 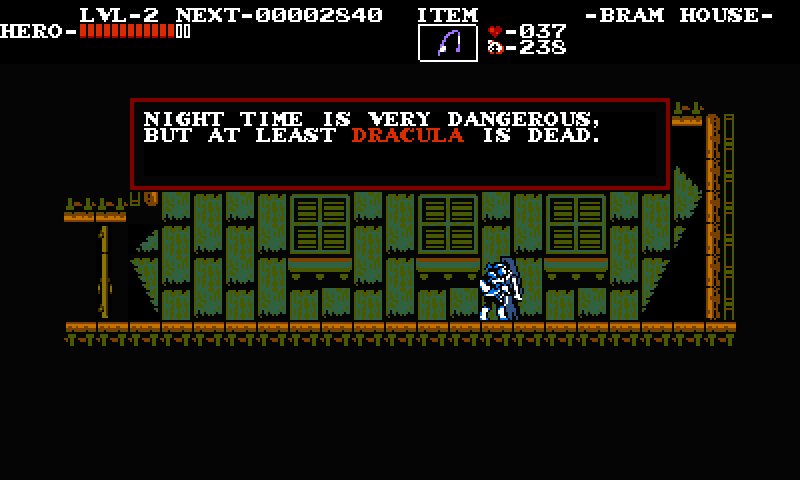 So what’s he got planned? For starters, he’s got a concept for Dracula that will be a welcome sight for fans of the Willem Dafoe classic Shadow of the Vampire. He’s also thinking of handling Simon’s house with some Animal Crossing-style features. And don’t worry everybody, he’s also open to changing the name of the game if it means avoiding a lawsuit. Given how Konami has borrowed from other IP for so long, we can hope they won’t be hypocrites and come down on this loving tribute to their older, funnier games, but given how they shut down the creator of Castlevania after the third game in the series failed to sell as well as a notoriously painfulTeenage Mutant Ninja TurtlesNES title, we shouldn’t keep our hopes up.

Simon Questis set to be playable at ConBravo this weekend. If you stop by, be sure to pick up a sticker and tell ’em Destructoid sent ya.

[Disclaimer: I drew the demo’s digital box art seen above. I did it as a fan and I did it for free, and only because I loved the demo so much.]