Fast Bowser, hard-hitting Peach, or pretty much any other wacko idea

What initially seemed like a simple addition ends up being an interesting exercise of risk and reward. It turns out to be a pretty cool mode; the only downside now is that we will not see it for the Wii U version 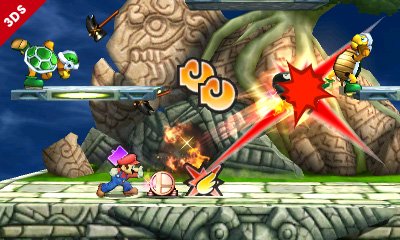 Smash Run begins with the four combatants dropped into a huge arena, with a five-minute timer counting down. Though players can track each other around the field, the real focus is on destroying computer-controlled enemies and stealing the delicious tokens they drop. Each enemy will drop some combination of powerups, which boost a character’s attributes such as speed, physical power, and jump height.

These powerups take effect immediately, and so they can be used to more effectively take on baddies around the environment. However, the catch is that being knocked out causes the player to lose all of his accumulated powerups and start over, with the time prior to the knockout wasted.

This is where the risk/reward scheme comes in. Players can fight through the dungeon conservatively, avoiding damage and running low risk of losing powerups, but sacrificing those that would have been gained if the dungeon had been traversed with more haste. Alternatively, players can bomb through trying to collect every powerup as quickly as possible, but that runs the risk of losing it all just before the timer expires. 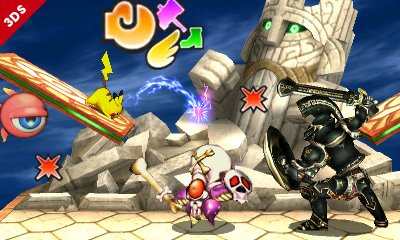 Once the timer does expire, the fighters are all put into a randomly selected, standard Smash Bros. stage, with a random rule set in play. This plays out much like a normal battle, except that every fighter keeps all of the powerups gained from the dungeon section.

Knowing this, players can try to engineer a character unlike those normally seen. The example given was that a savvy fighter could choose a heavyweight character like Bowser, but focus on gathering speed and jump powerups to give him the kind of movement capability usually reserved for lightweights. Alternatively, what I ended up doing was taking Little Mac, a character who is already quick, and giving him blazing speed.

It has surprising depth for something that has only been briefly touched on in the past. Between this and the earlier launch date, Super Smash Bros. for the 3DS is looking like a pretty attractive purchase. If only we had a GameCube controller adapter for the handheld.