Natural Selection II is the first-person shooter meets real-time strategy title, and two weeks ago developer Unknown Worlds hosted their World Championship tournament for the game. It was the culmination of months of qualifiers, featuring hundreds of players from all over the world.

So just how much does it cost to throw an event of this caliber? Unknown Worlds’ Huge Jeremy sent us over a breakdown of it all, and for this small indie studio it cost them $67,443 to host the World Championship tournament. A little over 52% of that was paid by the developers, and the rest was covered between sponsors and voluntary contributors. That’s not a lot, but remember this is an indie studio. When a company like Riot Games throws a big League of Legends tournament you can be sure they’re spending millions on it.

Viewership wise, they saw just over 105,000 total stream hits. They also experimented with the DLC branding stuff that you see with DOTA 2 streams. The four final teams got a DLC item in the Steam Store, a shoulder pad with a team logo on it, and players could wear it in-game to support their favorite team. 50% of the proceeds went to their prize pool, and from that they generated $4,594 in total sales, an average of $6.55 per customer.

I was curious just how worth it this whole tournament was for the developers, so I asked Hugh Jeremy and he told me that “gaming is about more than clicking pixels, it’s about people — An event like this creates human relationships and human experiences. It brings the experience of gaming out of the game world and into the real.

“It’s very hard to make a quantitative measurement of the benefits of doing that, to our customers and to ourselves as a game developer. It’s possible to quantify lots of things in life: Think about big free-to-play games ARPU’ing the shit out of their analyses. But at some points, quantitative measurement fails, and a business must make judgement calls. And we judge that the benefits of the Natural Selection 2 World Championship were pervasive, substantial, and far in excess of the costs incurred. So yes, it was worth it to Unknown Worlds.” 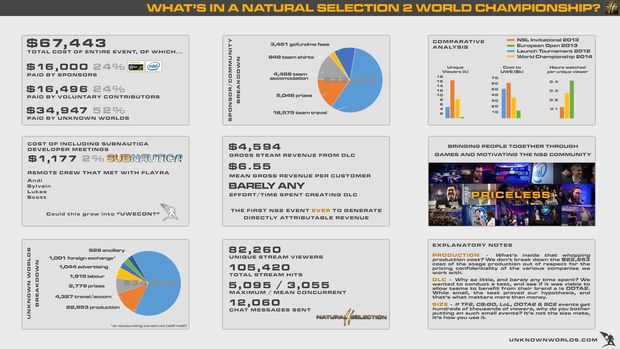 So with that said, can we expect more tournaments in the future?

“If you look at the history of competitive Natural Selection 2 since launch, the trajectory is clear: 16 months since release, the events keep getting bigger and better,” Hugh told me. “The depth and breadth of talent in the player community is growing deeper and broader — And not just in terms of play, but in terms of casting, logistics, organization.

“This growth in event size and growth in talent leads us to believe that yes, there could be more tournaments in future. But at the core, that’s not a question for us as the developer, that’s a question for the players. And the last time that question was asked, they organized the World Championship. So if that is any indication of their future intentions, you can probably expect to see many more NS2 tournaments in future.”