I think we’re all guilty of underestimating just how difficult a process localization really is.

There are reasons why some games never make it out of Japan. We rarely hear exactly why, but it’s probably more complicated than some executive at Nintendo wanting to rain on your parade.

Translation is usually what we think about when localization is brought up, as if the process of bringing a game from one region to another were little more difficult than running the script through Google Translate and calling it a day. No. Again, it’s way more complicated than that. Translation isn’t a quick and easy thing. There are cultural references, idioms, and turns of phrase that just don’t, well, translate. But even once the herculean task of converting a mountain of text into a language your target audience can understand is finished, the job is far from over.

Just go take a peek atXSEED Games’ blog, where localization consultant Jessica Chavez recently discussed the state of affairs surroundingThe Legend of Heroes Trails in the Sky SC, a role-playing game for PSP and PC that the studio has been working on for…God knows how long. There are reasons for that, of course. And I’m not going to get into all of them here out of respect for the parties involved. But chief among them is the fact thatTrails in the Skyis amassivegame.

To illustrate that point, Chavez recalled trying to pull up a document containing the game’s full text on her computer, only to have the machine buckle and blue-screen under the weight of the file. Quality assurance sounds like a total headache, too. Even once you cram all those words into the game, the battle is far from over. For example, you are then likely to get problems like this: 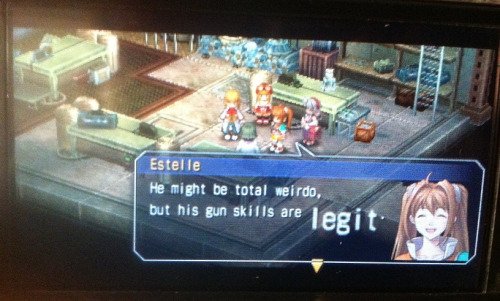 In addition to randomly inflating words and spacing issues (that sometimes require the localization team to rework entire lines of dialogue) there’s all sorts of other bugs that need to be addressed, like glowing doorways to nowhere, whatever is going on in this .gif, and disappearing scenery. And that’s just the fun stuff that Chavez decided to share. I’m sure there are other untold horrors.

Every game is unique, with its own problems and challenges, all of which can make the process more difficult, lengthy, or just not commercially viable for the publisher or development team. In December 2012, Capcom’s then-senior vice president Christian Svenssontold fans whythe company wouldn’t be localizing the gorgeous PlayStation 3 and Nintendo 3DS shooterE.X. Troopersas “all of the text is ‘hard coded’ as actual art.The text isn’t just standard ‘text’ that could be swapped relatively easily. To localize a release, one would have to redo a ton of art in the game.”

More recently,Senran Kaguracreator Kenichiro Takaki said that while he would love to bring his latest project, a rhythm game calledIA/VT Colorful, to western markets, it just wasn’t feasible due to all the rights involved with the music. According to XSEED’s Tom Lipschultz, the royalties involved with licensing would have bloated the game’s budget and made it unmanageable.

So maybe the next time you’re about to curse a company’s name and hammer out an angry comment here or elsewhere on the Internet when word breaks that a game you really wanted was delayed or isn’t coming here, stop and think. Maybe there’s a good reason behind the decision.