Sonic games have to have a casino world, right? We got an early look at a newly revealed world in Sonic Lost Worldon the Wii U called Frozen Factory here at San Diego Comic-Con. Despite the name, it’s a full-blown casino zone.

Remember Casino Night from Sonic 2? What a great stage (with great music), right? This one looks to be just as fun. 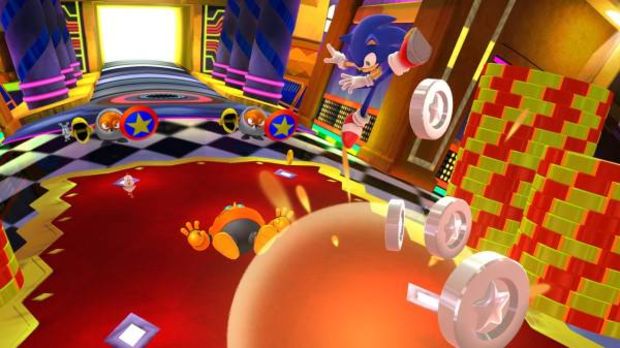 As you might have learned from previous coverage of Sonic Lost World, the stage names don’t quite fit the locations. Sega told us that we’ll get a better idea of how the names fit with the worlds when we see the full thing. Think of it this way: this casino zone is a place in the Frozen Factory.

Frozen Factory certainly didn’t look frozen or like a factory, instead looking and sounding like an overgrown casino, complete with huge poker chips and coins and deadly spinning dice. Even more deadly are the lasers that shoot out from the walls and weave their way into your running path. If you hit them, your rings go flying as you are electrocuted.

For Frozen Factory, make up for more of the challenge than the enemies do. Most go out with a single bounce, save for oneball-shaped enemy with a shield that required running around his back to kick him to knock him off guard.

There are little silver coins that you can pick up for points scattered around the stage. They’re not like rings, though. At certain points in the stage you can cash them in for access to other parts of the stage. They float in the air above and behind Sonic, growing in number in a sort of coin cloud. 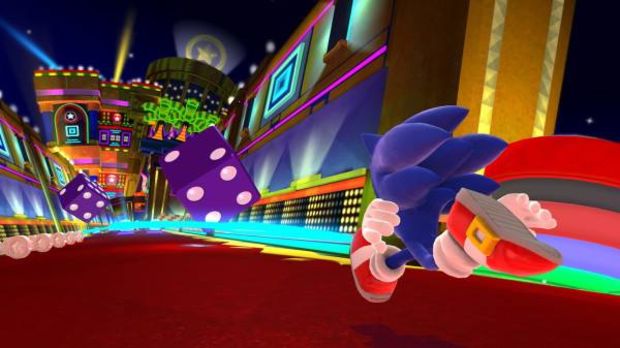 Early on, I was able to cash in coins for access to a pinball segment of the stage. Of course, this pays tribute to past Sonic games — you’ll even see Miles’ name in the stage decoration. The first bit I saw was actually mandatory — I had to flip Sonic into a certain catch to get out of the pinball machine area and back into the stage. There are also hidden optional pinball stage sections to find on your own, Sega tells us.

The rest of the stage had me running from huge runaway slot machine wheels. I was able to use Sonic’s new parkour moves to run along walls to dodge these and other obstacles. Some zones had numbered rings to run through, with progress permitted only after running through them in order.

Just as we’ve seen with the other stages in Sonic Lost World, this is situated on a cylinder that can be explored fully as you progress down it. Running alongside another edge or its bottom will reveal alternate paths. 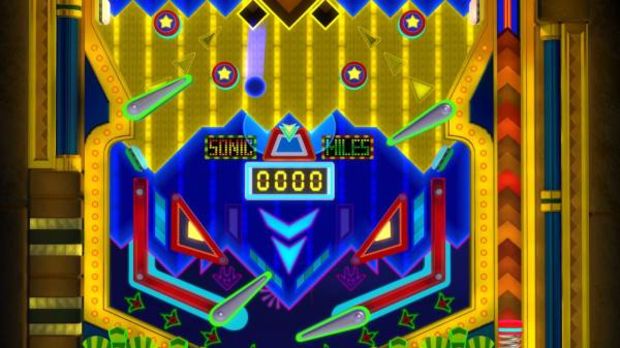 The last bit of this stage had me dying a couple of times. Those wall lasers I told you about earlier came out in a big way in the last stretch, doing a sort of Tron thing, beaming out from everywhere in front of me to hinder Sonic’s progress. A bell bounced around between multiple laser paths, beckoning you to follow it and ring it along the way. This required some tight platforming jumps to bounce into path clearings to follow it. I made it through after a couple of tries. After this, one final dodge through a fleet of huge rolling slot reels had me finishing the stage.

Oh, and the music is just as casino-y as you’d imagine. Fantastic stuff — brassy and upbeat toe-tapping stuff.

I’m glad to see that Sonic Lost World has a casino in it. I wonder what else they have in store for us.