The coolest thing I’ve seen at GDC so far

Imagine never having to use the right analog stick to move a game’s camera or reticle. Instead, you’d use your eyeballs to aim or move the camera — simply look at what you want to shoot at or move to.

This sounds like some dream for the future of gaming technology, but Sony has a working eye tracking demo at GDC this year. I had my doubts at first, but after having the infrared camera system calibrated to my eyes, I played Infamous: Second Son… 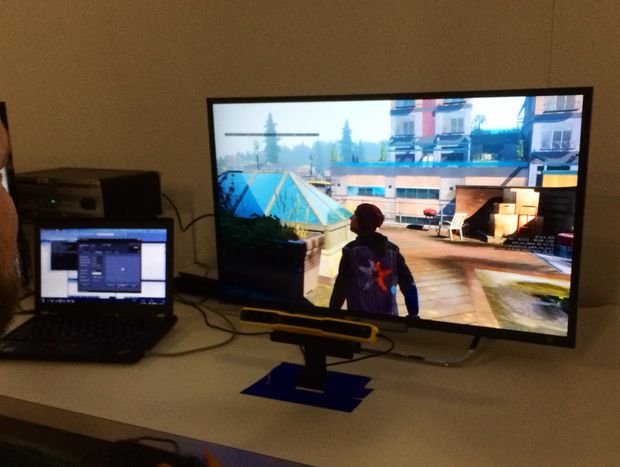 In an after hours demonstration last night, I sat down with Sony Computer Entertainment software engineer Eric Larsen to check out eye tracking, not knowing what to expect. I wondered what the big deal was about a game tracking my eyeballs. Why would a game need to look at me when I’m looking at it?

Larsen had me sit in front of an infrared sensor and look at a screen to see a really creepy shot infrared of my own eyes, and then he had me follow a marker that moved around the screen to finish calibration. And that’s all it took.

From there, I was able to try out a demo stage of Infamous: Second Son that had been modified for eye tracking input. It looked exactly the same as the current PS4 release, but I noticed that when I looked around the screen, the camera followed. As you can imagine, this took a bit of getting used to. Having my eyes scanning the game’s setting had the camera shifting left and right. It wasn’t fast enough to be disorienting, but it was like someone had their thumb on the right analog stick, pushing it slightly to mess with me.

It only took a few seconds to get used to, and using the analog stick to compliment eye camera control became natural quickly. 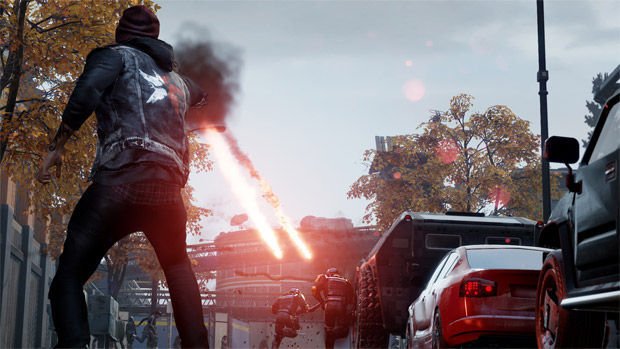 But when I turned the corner out of an alley, I immediately found myself under fire, and I had to quickly get used to aiming with my eyeballs. Again, scanning the screen to try to keep an eye on all the action wasn’t helping, but as soon as I learned to focus my attention on one object on the screen, I only had to mash R2 on the controller to take anything out. Once it clicked, the feeling of power was overwhelming. After blowing away my first few enemies I was so excited by this ability that I almost jumped out of my seat!

I imagined that aiming and controlling the camera with my eyes would be tiring, but it felt completely natural. Just look and shoot. It almost felt like a mind power being able to focus on one object on the screen and have all my fire direct exactly on it. Picking off targets in the distance became really easy for me after a couple of minutes. But it wasn’t too easy; the concentration required to target properly still had this control scheme feeling like a game, and as soon as that concentration broke, my aim faltered.

Larsen explained that this demonstration used currently available technology, and that their software was doing most of the heavy lifting. He said that one day they might be able to combine this eye tracking technology with their virtual reality technology to make for an even more immersive experience.

Imagine being able to use eye tracking in a sports game. You could look at another player before passing the ball instead of having to choose a player with a controller button. A survival horror game could have you training a flashlight in the dark with your eyes. We came up with several great ideas like these during our chat.

For someone that plays games professionally, I’m a terrible aim. I’d love to see this come to market for this point alone!

Let’s hope that Sony continues to move forward with this exciting technology.