After a few days of ink-flinging online mayhem, the horror that is Nintendo’s latest splatfest, which took place globally on Splatoon 2, has finally come to its conclusion.

It was close, real close, but now that the ink has dried in North America, Europe and Japan, the scores have been tallied and we can see that Pearl’s Team Squid beat out Marina’s Team Octopus 2-1. All three points were very close, with Octopus bagging 55% of the vote, and Squid pulling back Team and Solo points by a mere 1-3%. This was the narrowest splatfest in sometime, and seemingly could have gone either way.

Regardless, the most important thing is that the madness is over. We can start ignoring our differences and getting back to being one big, happy, aquatic family. At the end of the day, it’s not about who splatted who, or who resided in Inkopolis first, or who takes Brellas over Chargers. As long as we’re all in agreement that Pearl is the best, everyone’s happy. 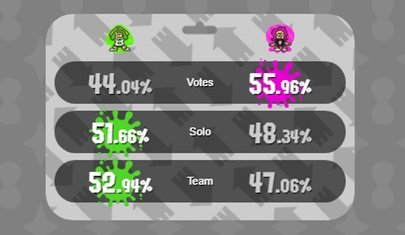