I’ve always had a strange relationship with the characters from SpyParty. With the old “basic” character models, there really isn’t much detail or emotion put into any one character. Yet, I always find myself saying things like “ugh, Suit Guy has been standing in that one spot forever. Typical Suit Guy tactics” or “Lady Frump always has to have a drink in her hand…I think she has a problem.” Despite the fact that I’ve never learned any of their names, I’ve always felt attached to them.

Ever since the new character models were introduced though, I’ve started coming up with actual plausible backstories just from a glance. Characters have more personality to both their models andanimations, making it way easier to connect to them, right before you shoot them in the face. Until now, there’s only been five characters in the New Look™. However, that roster has just been doubled!

Let’s see the new faces that will be inspecting statue after statue, shall we?

Before I continue, I want to mention that Chris Hecker, the developer of SpyParty, has told me that all the names are placeholders, but all the art is in-game art. The realnames will likely be chosen by the community. 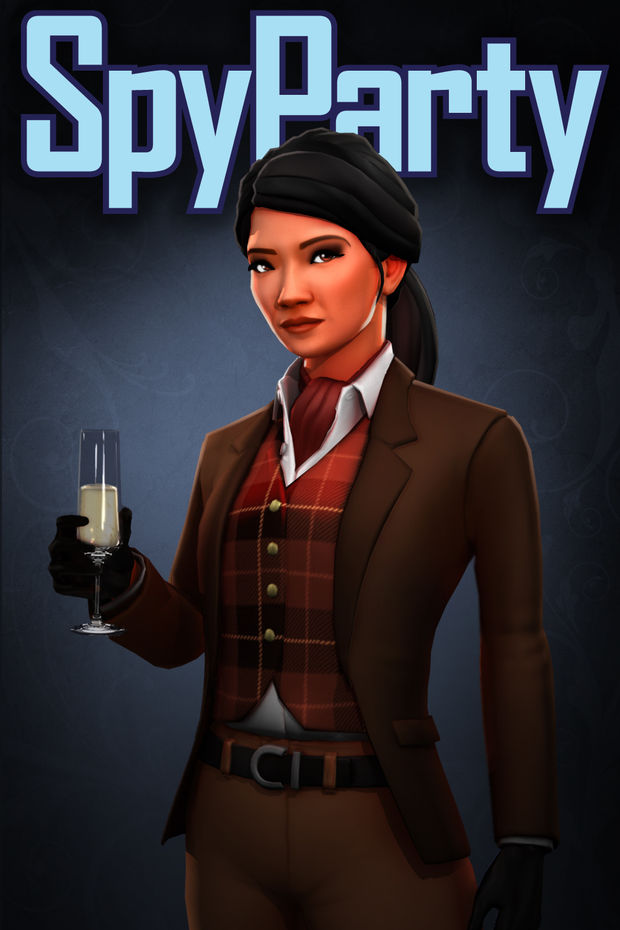 Ms. F is actually based off of the artist’s girlfriend, and sports an “equestrian fashion” outfit. I actually live in the town that the U.S. equestrian team is in, so I’ve seen plenty of people in this garb. Chris also says that it’s in fashion right now, and I’ll take his word on that.

When I look at Ms. F I see an Indiana Jones-esque adventurer. I think it might be the gloves. I wouldn’t be surprised if she just got back from robbing some hidden temple and is trying to kick back by attending some soiree with the upper class. It would also give her good reason to inspect all those statues. Maybe a statue was stolen and she’s looking for the culprit! I’m on to you, Ms. F. 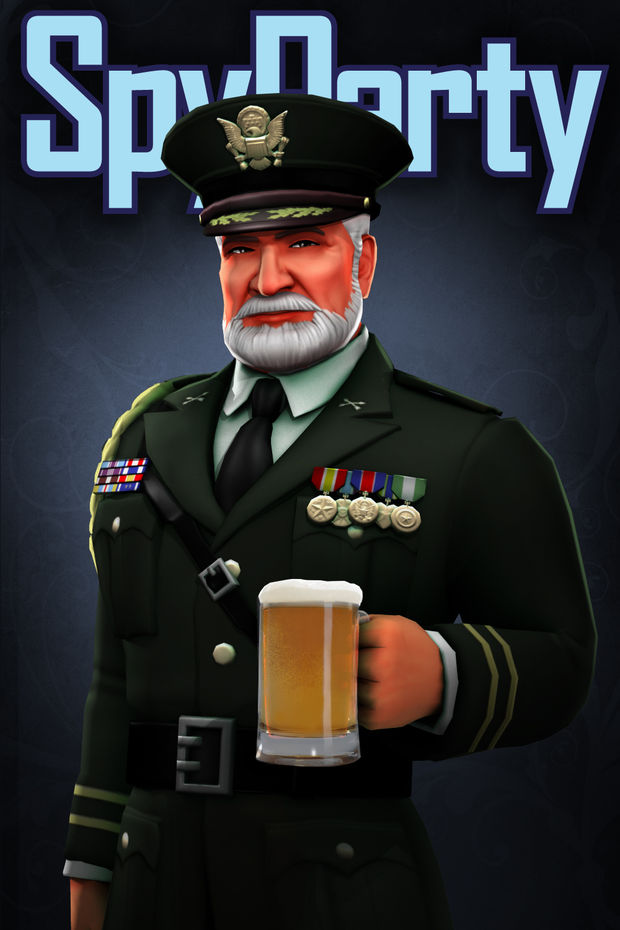 Obviously Mr. G is a decorated veteran here. He’s also the first character from the Old Look™ to be transformed into the New Look™. Here’s a comparison picture to show you just how drastic the change is: 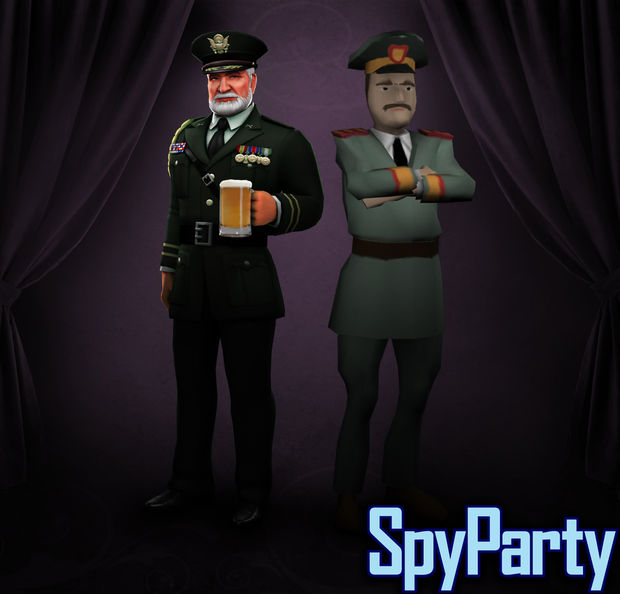 Amazing. Simply amazing. I’m not surprised Mr. G has a vacant expression on his face, can you imagine the kind of stuff that he’s seen? He’s experienced World War II, Korea, andVietnam! He doesn’t like to talk about it though. He’s well respected by everyone in the academy, where they like to refer to him as “The Great G.” 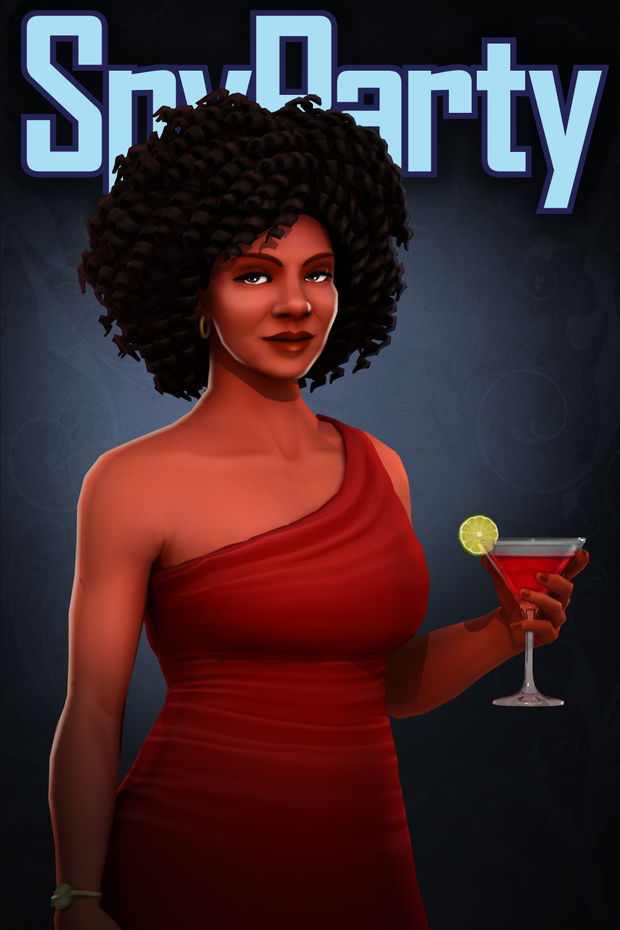 If we’re talking character models, according to Chris Hecker, “SpyParty characters are about 12000 triangles or so. Ms. H’s hair has 23767 triangles in it, so there are two full characters’ worth of triangles in her hair alone.” There may even be two other characters livingin there, for all I know. That’s some serious hair dedication. Just look at it!

Since there’s a “skeleton” in her hair, it should move and make sense when she talks. Another thing Chris mentioned is that they focus a lot on each characters’ silhouette to make them distinct, which is something I know Valve has talked about when designing many of their iconic characters. These guys are on the right track, needless to say. Can’t wait to see Ms. Hair in action!

As for what Ms. H does? Well I think it’s pretty obvious that she’s a very accomplished actor and will be the lead role in an upcoming film, Sister Act 3: Herstory Lesson. Since it’s release is not too far away, she needs to drum up as much publicity as she can by meeting the Hollywood elite. 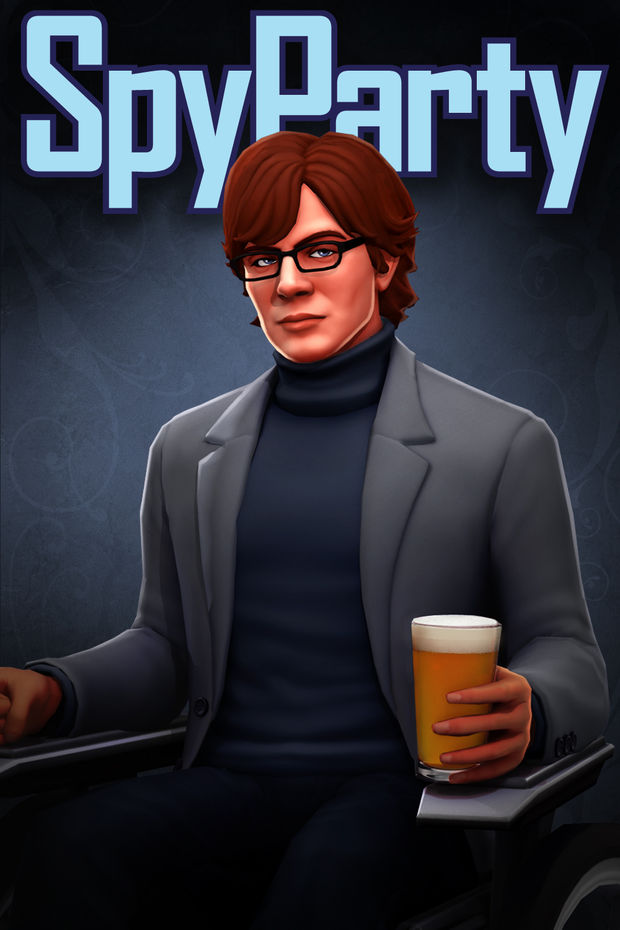 This is, as Chris mentions, how he just added vehicles to SpyParty. Early on, he’s going to move around just like every other character, which is bound to look totally bizarre for a character in a wheelchair. Eventually, he will have his own custom moveset.

Mr. I just lookslike he has some ulterior motive. Just look at that face! He’s up to no good. In fact, I bet he’s not even handicapped! Perhaps it is all a ruse to get closer to the love of his life Ms. H! Or maybe he’s trying to get information from this next character so he can post it on his politics-bashing blog… 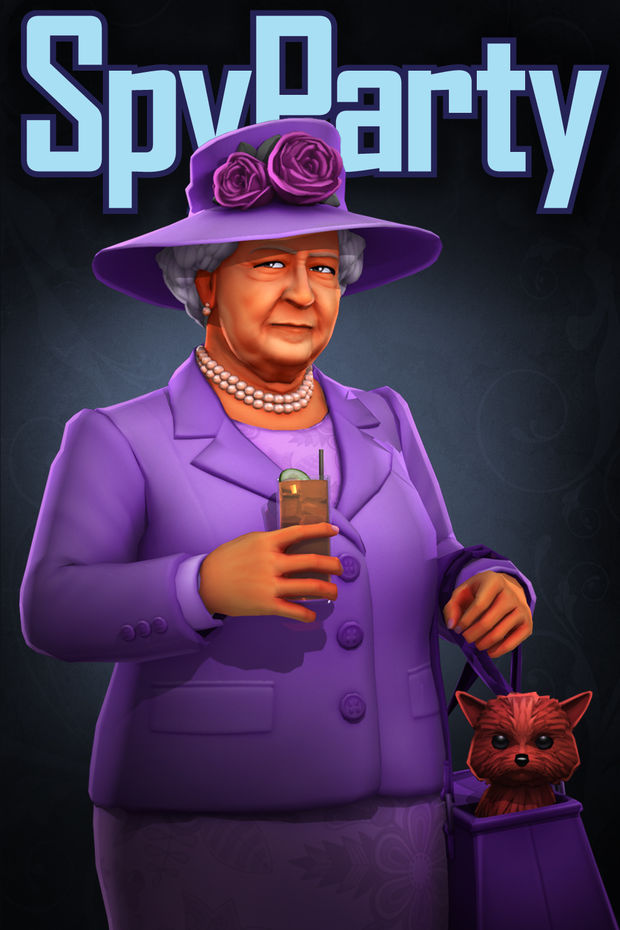 Ms. J is modeled after Queen Elizabeth, in case that wasn’t completely obvious. Though I’m not sure she’s ever carried a handbag-hound along with her, but she does own corgis I think. Before you even ask: yes, the dog is fully animated. Chris isn’t sure yet whether or not he’ll disallow people from shooting the dog:

“I can’t imagine adding a sound effect for shooting the dog, that seems like it’s going too far. However, there’s a glass breaking sound if you shoot somebody having a drink, so there is precedent. This needs serious design thought, and consultation with an ethics committee.”

Personally, I’m thinking to disallow shooting the dog, and make a custom animation for after Ms. J gets shot which includes the dog jumping out of the purse and running away. That way we know the dog makes it out safe, which is really what most of us care about.

The interesting thing about Ms. J is that she’s only famous because Rolf, the dog, is famous. Rolf has starred in countlesscommercials, and was even in the British version of Air Budtitled Bark Dunk. Ms. J is a classically trained bodyguard-for-dogs and her regal appearance is really just a clever ruse to distract from the real talent in her pocketbook. 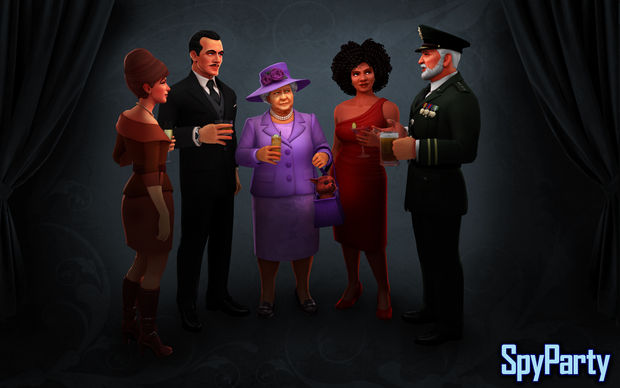 Ok, so I made up all these backstories, but the rest of it, about the actual character models and gameplay decisions, is true! As if it needs to be said, the art style that SpyPartyhas adopted truly is amazing, and a huge Kudos goes out to John for creating these characters and this look. What makes me smile from ear-to-ear though is the fact that behind all this great art is one of the most intense and best designed competitive videogames I have ever played.

Chris plans to have 20 playable characters at release, so they are currently halfway there. Now that they have 10, they can do a fully playable SpyPartymap with only new characters. The plan is to have a fully playable New Look™ level by PAX Prime at the end of August and to replace the tutorial map with it. That way, new players come in and see the beautiful art and will have a good idea of what is to come with the final project. Yes, they will get better and move on to the Old Look™ maps, “but by then they’ll understand the gameplay depth and won’t care as much. That’s the theory, at least.”

If it wasn’t obvious already, Chris wants the SpyPartycast to be “the most diverse game ever in terms of the kinds of playable characters.” He says they actively think about bringing in all different races, genders, ages, abilities, and body shapes. Sexual orientation doesn’t matter since that’s built into the gamewith the “Seduce Target” mechanic, which could have anyone seducing anyone.

It’s plain to see the amount of love and care that goes into every single one of these characters, and I can’t wait to see the next batch!