K’Nex has had Super Mario-themed playsets for a while (including 3D Land), but on September 24, it’ll drop a new line on Nintendo fans — the sets for 3D World, complete with a cat figure!

I had the chance to test out the first major kit, which includes a mouse enemy, launcher, and building pieces themed after the first level of the game. 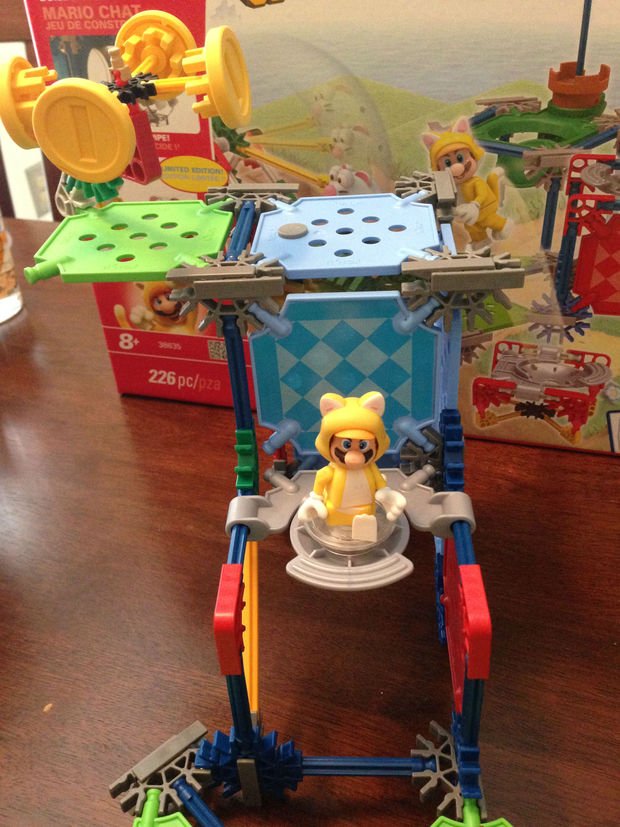 If you’ve never used K’Nexbefore, they are a tad more complicated than your average LEGO creation, but anyone can pick it up after staring at the directions long enough. Most of it involves plastic wheels, which have spokes used to attach more wheels. It’s a bit frustrating at times mostly because the directions aren’t always clear which spoke something is supposed to attach to, but it never really took more than a few minutes of trial and error to figure it out.

I assembled the set with my wife, which took approximately one and a half hours with two people on-hand. We listened to the entire 3D Worldsoundtrack during the process, which made it a bit more enjoyable.

All in all it’s roughly 226 pieces, which sounds like a lot until you realize that some portions snap together in seconds, knocking out like 10 pieces at a time. Most of your fun will be had actually constructing the thing, but if you want, you can flip Mario around with the launcher contraption and have him smash into your creation.

It’s fun to try to get him to flip onto the flag pole base, which raises said flag up in the air once he falls through the trap door in the middle. That’s about all you’re going to get in terms of action, really, and it could stand to have a few more interaction-based objects.

For $34.99, it won’t break the bank either like some other playsets, so give it a try and spend some time with your family next month after you’ve played the game together.