Well, actually a number of things, under the same emotional umbrella tattered with holes so the rain hides my tears

Nintendo is good about making Super Smash Bros.entries distinct, even if, so far, that just drives the competitive crowd back to Melee. And in going beyond iteration, it’s easy for a newSmashgame to feel in some way not quite right (hence everyone that went back to Melee).

I arbitrarily used a Simpsonsscreenshot of sadDarryl Strawberry as a temporary header for this post, which began as an innocuous enough thought: Super Smash Bros. (3DS) lacks any sort of character-specific modes, which is kind of a bummer. Of course, it’s not entirely fair to compare a handheld Smashto previous console versions, but it’s the first new Smashin years — I couldn’t help it.

As I stared at sad Strawberry and teased out these thoughts, I got more and more nostalgic — using formative-era Simpsonsmight have contributed — for past Smash(mainly the original and Melee)and what they had that 3DS Smashdoesn’t. Which is why themaudlin subheader. 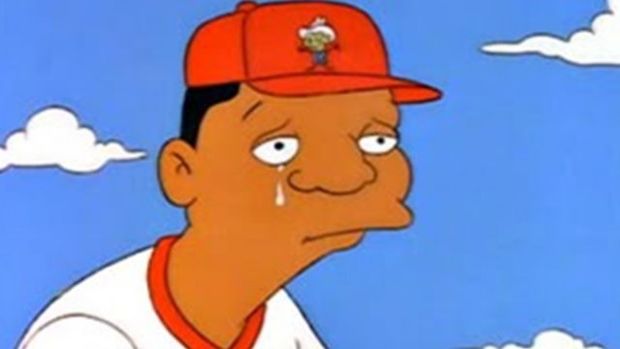 A lot of 3DS Smash‘s praise has centered around the idea that it is somehow “fit” for the 3DS because of brief modes, of which there are many. This is already at odds with how I have always played handhelds, which is as hours-long engrossed as anything else. While I’m guilty of occasionally phoning in a “this would be perfect on the Vita” — because I want to play everything on the Vita — the idea that a game is “fit” for mobile devices and that that should be a point of praise is somewhat bizarre.

There are a lot of modes, but what bummed me out a bit was that there was nothing to encourage me to use new characters. Yes, this should be an intrinsic thing. I should want to play new characters because playing the videogame is fun and playing with new characters should be part of the fun. But previous games were better about encouraging you to try new things.

Event Match often let you pick your favorite, but also (especially in Brawl) forced you into more specific scenarios, forced you to use new characters. You haven’t really set up games against Ice Climbers? You haven’t used that weird kid in the baseball cap? Now you have to. Break the Target, too, was another one of my favorite modes, and really how I started learning to use other characters.

Without even a fighting-game standard paper-thin story, there’s not too much incentive outside of trophy collection to play with other characters in single-player modes. The new target-breaking minigame is Angry Birds— stone and wood physics stacks — crossed with the sandbag homerun contest. Hit the bomb off a platform, try to blow up targets. It doesn’t matter who you use.

I’ve been playing Smashfor 15 years now so when setting up arbitrary exhibition matches, it’s easy to stay entrenched in the familiar, play Samus and Jigglypuff. Online, too. Don’t want to try out a new character in a mode where honor is at stake. Some kind of progression system that encouraged trying new things, as well as character-specific challenges or tasks, would have been nice.

But that’s the other thing the 3DS version has done away with. As we noted after the Japanese release, it’s easy to unlock all the characters. Any sort of single-player progression seems undercut by an attempt to open up the game’s secrets quickly for the sake of multiplayer. About 100 Smash matches will do it. Some characters have even quicker shortcuts.

Super Smash Bros.for me was equal parts single and multiplayer good times. The 3DS has a lot to do, but it’s all sort of the same, likely because of the same system limitations that killed Ice Climbers,separated Zelda and Shiek, and turned Pokemon Trainer into a lonely Charizard. Aimlessly messing about in Smash Run, the 3DS-specific single-player mode, isn’t all that fun to me (same with most of the move tuning/RPG elements). And while single-player progression has been undercut seemingly to open up multiplayer, the 3DS is not a multiplayer-friendly system for me. Online play has been 1/3 fine, 1/3 super slow motion (miss you Slow-mo Melee), 1/3 input lag, and I know few 3DS owners in real life. Plus, they have to own a copy of the game instead of one communal copy facilitating fun.

Smash Bros. 3DS is an admirable effort and plenty of fun despite the circle pad hand cramps. It’s just not what Ineed Smash to be. Maybe I’m a better fit for the “Waiting for Wii U” crowd.And if you feel the same way, stay that itchy trigger finger and keep waiting with me.