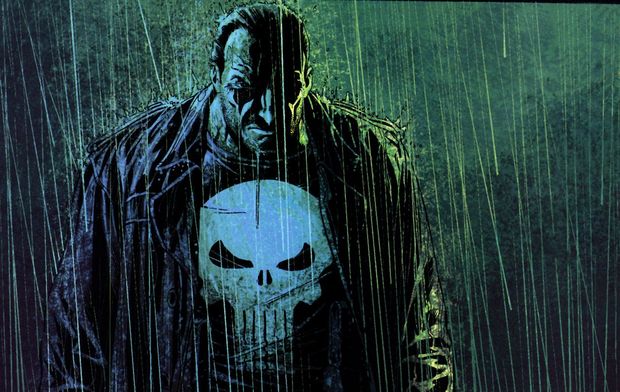 Who needs a Superman?

Rocksteady has accomplished some amazing feats with the Arkham series. It’s the first series of games to finally nail the feeling of being the Dark Knight, it perfected the combat system to a point where “Arkham-style fighting” is industry slang for other games that ape it, and it managed to infuse the games with a real reverence for decades worth of comic lore and trivia without bogging down the experience, a tricky line to walk. It has done a great job.

Perhaps most impressively, Rocksteady walked away at (arguably) the highest point of its game. Unlike some franchises we could name (side-eyes to the last dozen or so half-cooked Assassin’s Creed games), Rocksteady has the good sense to wrap things up before it ground the series into the dirt with repetition and watered-down sequels (we’ll ignore Arkham: Origins since that wasn’t Rocksteady’s baby). It’s a rare display of acumen and restraint that we aren’t used to seeing in the video game world where sequels are kings and most studios become prisoners of their own success, stuck making the same games over and over again until they’re no longer profitable.

Which is why it’s so frustrating to hear all these rumors that Rocksteady is likely taking on Superman next. How can it be so smart with every other move it’s made, but then blunder into such an obvious trap? I’m not going to belabor the point; we all know why there has never been any good Superman games, because it’s impossible to make anything remotely faithful to the character that is still fun to play. He’s too powerful to legitimately challenge, and any attempt to bring him down to some kind of reasonable level feels like a cheat.

Besides, it’s also seems creatively timid. Get done with one of the two most recognizable heroes of the DC universe and immediately move to the other white meat? Bold. For a studio that has the clout and talent to take on almost any project it would care to, it seems like the most boring choice.

There are a lot of interesting comic book characters out there who are practically begging for a game. If Rocksteady wants to stay in that milieu, it doesn’t have to go with the big dumb blue boy scout. I can think of several comic characters just ripe for the Rocksteady treatment that would make for a more interesting game.

Look, I love the Arkham games, really. But after four games of playing the part of the morally upright caped crusader, fighting the same damn villains over and over again because he refuses to cross the line and put a permanent end to Gotham’s insane clown problems, I’m ready for a more practical superhero experience. A hero who sees a problem and deals with it. Maybe it’s me, maybe I just grew up with too many ’80s action movies and I see every problem as something that can be solved with an UZI and a handful of hollow points, and I know deep down that isn’t true. But, it is a worldview Frank Castle would certainly agree with.

I would love to see a big budget game finally do right by everyone’s favorite PTSD-stricken vigilante. The Punisher has had a mixed history with games, ranging from a fondly remembered but completely standard beat-em-up in the early ’90s, a bizarrely violent PS2 outing that felt like the The Punisher as directed by Eli Roth, and his last showing was a completely dismal PS3 downloadable title. The greatest crime to go unpunished in that case was inflicted on the fans. Frank needs a win, and the Rocksteady team could pull it off.

Picture a slice of New York City rendered as impressively as Gotham was in Arkham Knight. Not some sprawling open world nightmare where 90% of the budget gets blown on world assets, but enough room to let Frank move around and explore, a hunting ground to stalk and shank his way through the criminal underworld. Give him a list of targets and goals that force him to move around the city, digging up his own leads and carving his own path through the local vermin.

Force players to think about their actions and plan their attack carefully, always mindful of potential innocents that could be caught in the crossfire and escape routes to take in case the cops show up early. Borrow from Shadow of Mordor‘s nemesis system and let Frank bully and threaten around lower level bosses and snitches to build a stepladder of bullet-riddled mobster corpses up the food chain.

And please, don’t skimp on the guns. This is THE PUNISHER we’re talking about here, he doesn’t have any super powers to reveal or fuss over. All he has is grit, every edition of Jane’s Directory of Small Arms ever written, and a creepy warehouse full of meticulously maintained weapons to obsess over — so pay them the proper due. I want to see armament so overly-detailed and described it would make Solid Snake blush. I want gun worship so intense that it makes the Counter-Strike custom model scene look casual. I want glorious matte-black and nickle-plated idols, not items.

Hrum. Maybe reading all of those issues of The Punisher Armory when I was a kid had a lasting effect after all.

Zatanna would make a dope video game protagonist. Look, I know it may seem hypocritical just after opining about the idea of a Punisher game, but there is something to be said about getting away from the typical brooding, depressive, vengeance-obsessed dude protagonists of the comic book world and doing something a little different. The mystical world and glitzy stages Zatanna trades in isn’t just a step in another direction, it’s a leap into an entirely different dimension.

Most superheros come from some kind of pseudo-scientific background. Amazing abilities thanks to a solar-powered alien physiology, a robotic suit of goodies powered by an artificial heart/fusion generator, a kid gets bitten by a radioactive honey badger and gains all the proportional rabies and hatred of a man-sized honey badger, and so on. They may be implausible, silly, and ridiculous, but they all come from some semi-believable point in reality.

Zatanna is having none of that. Zatanna is capital M Magic. No science, no excuses, just real deal “as I speak I create” world bending, wizards and warlocks stuff. When Zatanna’s will and the hard solid wall of reality collide, it’s reality that bends, buckles, and inevitably breaks.

She lives in the DC universe, filled as it is with its infinite supply of nameless muggers, tacky C-list theme villains, and alien tyrants, and sure she deals with them like any other upstanding member of the JLA. But she also has one foot in a much stranger world, a shadow realm of ghosts, astral projections, and scheming devils, the kind of threat that the Elongated Man or any of the other rank and file heroes aren’t likely to deal with anytime soon. She rubs shoulders with weirdos like John Constantine and the Sandman. Her rogues gallery includes the biblical Cain, infamous brother-slayer and lord of vampires. Oh, and in her “downtime” she stars in her very own internationally famous magic show, impressing sold-out crowds with unbelievable displays of sleight-of-hand tricks and impossible escape artistry (no cheating).

C’mon, there has to be an interesting game just waiting to be made with all of that. I would love to see a title that embraces all the craziness of Zatanna’s character, how different and unique she is compared to the rest of the DC line-up. I want to bust thugs and necromancers on the same night and still make it to the stage when the lights go up. 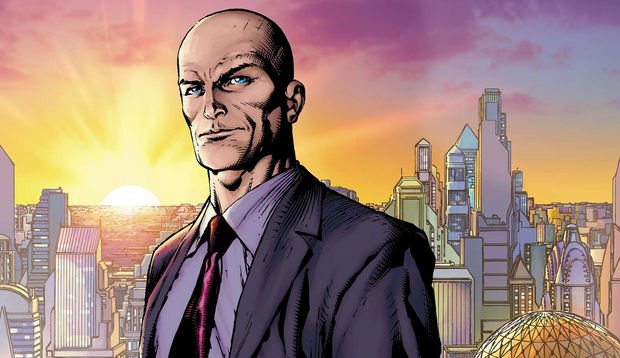 Everyone sees themselves as the hero of their own story, even a madman like Lex Luthor. Sure, he may be singularly obsessed with ridding the planet of its greatest defender (without whom everyone in the DC universe would almost certainly be dead by one cataclysm or another) for often vague and seemingly irrational reasons, but they’re his reasons. They make sense to him. In his mind everything he’s done to force the alien off his planet, no matter how despicable, has been in the service of a greater good, as illustrated beautifully in Brian Azzarello’s magnificent Lex Luthor: Man of Steel. I want to play as that version of Lex, the last sane man who sees what a threat Superman is to the human spirit, the man who is forced to play the part of the villain to attain a greater goal.

And who says Rocksteady has to work on another third person action game? There is a ton of talent up in that studio, and while I’m sure they’re incredibly proud of everything they’ve accomplished with the Arkham series, they’ve been at it for more than half a decade. I’m sure they’d appreciate a change of pace.

So how about an evil management sim? A game where you play as the bald genius presiding over Lexcorp, trying to figure out how to smuggle parts of your doomsday laser into orbit. Maybe if you win the contract to to build the next international space station you be able to send up a few extra rockets without tipping your hand (not to mention, the proceeds could be used to fund the sentient virus a deniable subsidiary in Istanbul is working on). Or how to quash the hazardous material team’s recent attempt to unionize without attracting any eyes on the mechanized centipede project. Of course, all that will have to wait until you deal with the PR nightmare of a dead superhero with suspicious laser burns turning up on your property, again.

Call it a breather between projects. There will always be another big budget action game with another big chinned boy scout to make. Rocksteady could recharge the batteries and stretch its creative muscles with something different, something sinister. 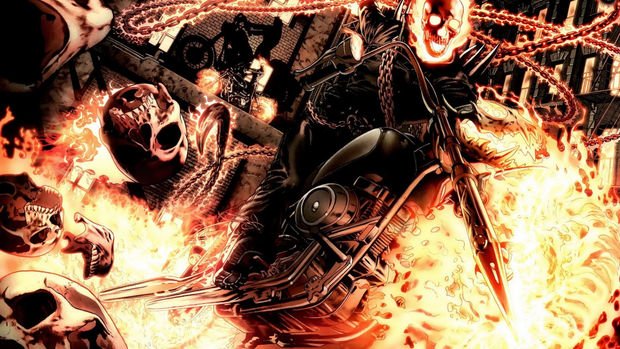 Ghostrider is stupid. I mean, look at him. He’s the ghostly reincarnation of a stunt driver who haunts the streets with his hellfire-powered motorbike, flaming skull, and “penance stare.” He’s the most ’90s thing to ever happen (even though he was created in the ’70s) and HOLY SHIT, COULD YOU ASK FOR A BETTER BASIS FOR A VIDEO GAME!?

What kind of world do we live in that the “best” representation of Ghostrider in a video game was as a character in Ultimate Marvel Vs Capcom 3? How do you squander such a sublimely stupid concept with a tepid PS2-era game and a few cameos in dreck like Maximum Carnage? No, this won’t do. Rocksteady has a mandate, a new mission: Go forth and make the biggest, dumbest, raddest, motorcycle-riding-ghost-vigilante game possible.

In fact, screw it. I don’t even want Rocksteady to do it. It’d probably do a good job of it; it’s got the chops to sculpt a decent game out of any source material. It’s not the studio’s talent I doubt, but its taste. I bet it’d take Ghostrider a little too seriously, try to do too good a job establishing him as a real character with believable motivations and villains to fight. The developer wouldn’t mine that rich core of ridiculousness that lies at the heart of Ghostrider for all its worth. This is a job for Platinum. We need that Metal Gear Rising treatment of the source material, the kind of self-aware winking charm of a Bayonetta, the breakneck pace and visual assault of a Vanquish.

We need the fastest, prettiest, and dumbest Ghostrider we can get. Anything less would be a waste.