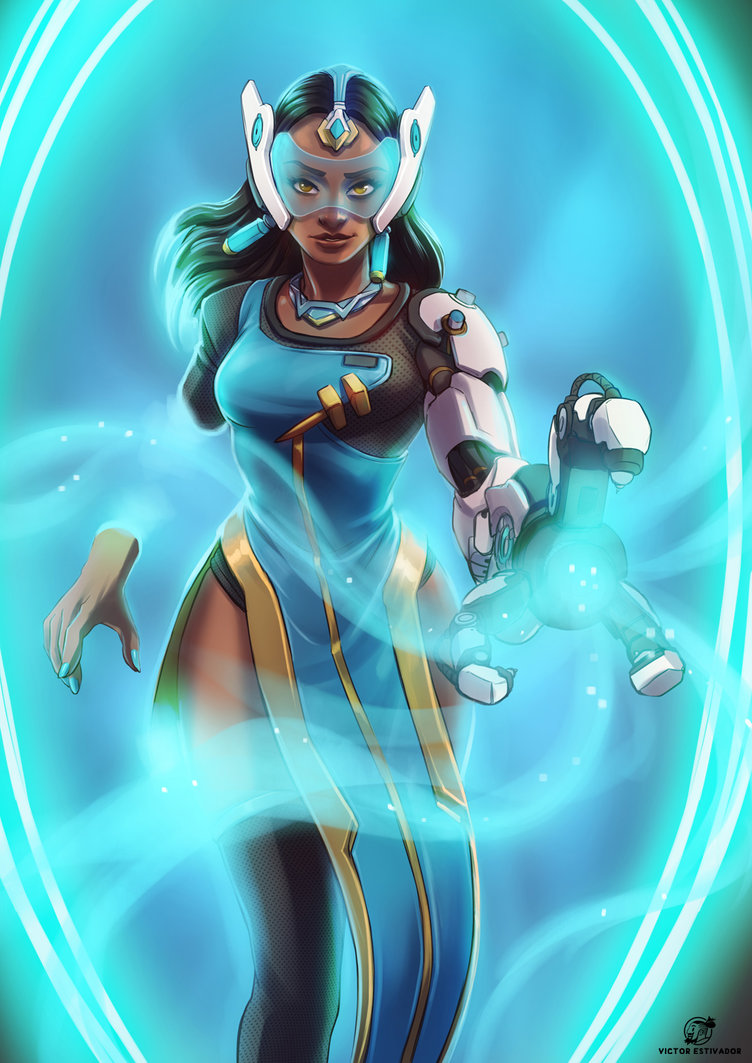 The path is open, please proceed

Header image by PersonalAmi on DeviantArt.

Soon after the announcement that players would be able to try out Symmetra’s changes in Overwatch, the Public Test Realm (PTR) opened up for PC players to give her a test run. Since Sym is one of my most played characters, I was eager to try out the changes for myself. I enlisted a friend to help me do some testing, and here are the results.

Symettra’s basic ability to provide a minor health buff to her teammates has been removed from the game. Instead, she can now summon a “Photon Barrier,” a durable, mobile shield that automatically moves forward from her position at about Roadhog and Reinhardt’s walk speed. This ability is on a 10 second cooldown and casts pretty much instantly. The barrier acts nearly the same as Reinhardt’s hardlight shield, allowing your team to fire through it while stopping enemy fire. There’s no physical presence, so enemies and allies alike can walk right through it. The barrier will follow inclines, but is destroyed if the center runs into a wall or something solid. Symmetra’s shield is oblong in shape, which leaves some exposure on the corners that Rein’s shield doesn’t have. It’s very sturdy though, and could take more than two seconds of sustained Bastion fire before breaking. Testing shows that it has somewhere around 1000 hit points, about half as much as Reinhardt’s shield.

meanwhile, in the ptr pic.twitter.com/KLkreJuf4y

We played around with the Photon Barrier to see what it could soak up, and were pleasantly surprised to see that the answer was “pretty much everything.” Two notable exceptions: an opposing Symmetra can launch her secondary (charged) fire through the barrier, and Reinhardt’s Fire Strike pierces it as well. Zarya’s particle beam and Winston’s Tesla Cannon won’t penetrate the barrier, nor will projectiles like Mei’s icicles, Junkrat’s blast balls and explosive mine, or Hanzo’s arrows. It can even be used to stop ultimates like McCree’s High Noon, Tracer’s Pulse Bomb, and heavy hitters like Reinhardt’s Earthshatter and D. Va’s Self Destruct. Mei’s Blizzard projectile did penetrate the barrier, and so did Hanzo’s Spirit Dragons.

Symmetra now receives charge on her meter for blocking damage with the Photon Barrier, making it easier for her to build one of two ultimate constructions. She can now choose to build a shield generator or her teleport pad, though it’s impossible to have both up at the same time, and she still can’t build charge for a new construct while the old one is still active.

The Teleport pad has been significantly upgraded and is much harder to destroy. It took 5 direct hits from Pharah’s rocket launcher to take out a fresh pad, so it seems to have a little less than 500 HP. Although her buildings’ health still isn’t visible, most of it has been changed to rechargeable shields similar to Zarya or Zenyatta’s blue bars, meaning that it should repair itself most of the way if you manage to dispatch an attacker before they can finish it off. There’s also an on-screen popup that will let you know when the pad is being damaged.

Artwork by Estivador on DeviantArt.

Symmetra is now unique in that she can choose between two different ultimates. By pressing the button multiple times, she can toggle between her standard teleport pad or a new construct, a Shield Generator. This can be placed anywhere the teleporter could, and grants the friendly team 75 extra health in the form of regenerating shields as long as they’re within range of the device. If you leave the area covered by the Generator your extra health will go away after a few seconds, but you’ll get it back immediately when you re-enter the field.

What’s great about this is that the Generator does not require line of sight, and has exceptional range. For example, when placed inside the small building near the first defense point of Volskaya Industries, the field stretched well past the chokepoint archway near the truck. This extra health will regenerate as long as the generator remains active, but once it’s destroyed, everyone on the team loses the buff immediately.

The Shield Generator can be placed on a moving platform or a payload, though it’s more useful to hide it since it doesn’t need line of sight. I suspect this will change, but the pad can currently be placed within the spawn room, meaning the enemy team may have no way to destroy it. And although it won’t matter in any game modes other than No Limits, the shields do stack with multiple Symmetras, each granting an additional +75 regenerating health. It doesn’t appear that voice lines for the new construct have been added yet, and all of the characters still refer to it as a teleporter.

Symmetra’s primary fire has been slightly lengthened, though I couldn’t tell exactly how much farther the beam extends. Lúcio can still knock her back just far enough to break the lock. It should help her counter Genji a little more effectively since he’ll have more trouble dashing out of her range. Her secondary fire is unchanged, and you can still fire a slow-moving beach ball that penetrates enemy shields and barriers for massive damage. Her turrets haven’t changed much, though she can place all six without waiting for a cooldown now. They also regenerate slightly faster, taking 10 seconds instead of 12. She can also store up to six in reserve, making it far easier to set up a fallback position if your first line of defense falls. 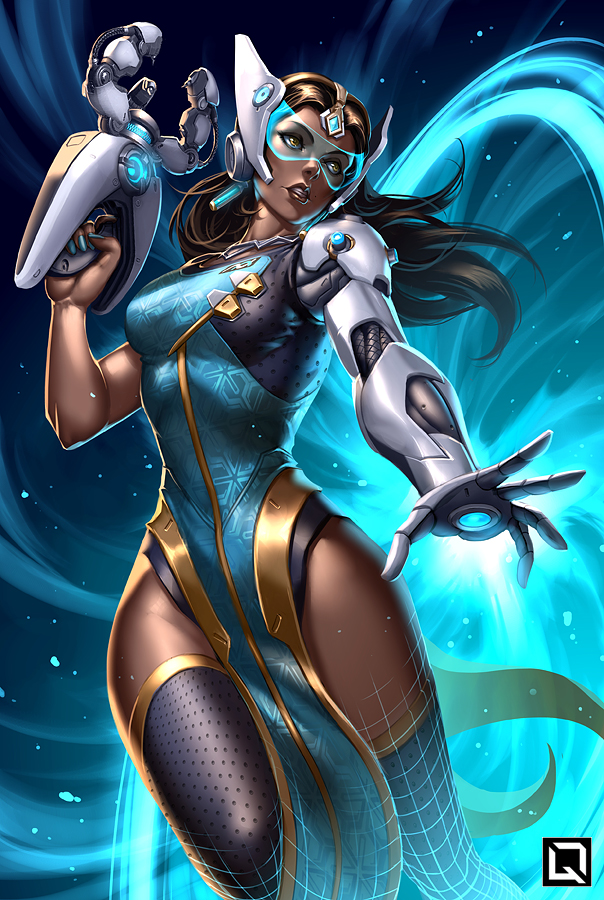 Artwork by Quirkilicious on Deviantart.

I’m not sure the changes will lead to Symmetra being chosen more frequently on attack, though the Photon Barrier gives her some utility that no other hero can match. I can definitely see it being useful in helping push against an enemy Torbjörn or Bastion, blocking enough fire to help the team take down a fortified position. It could also make for some huge plays, stopping an enemy ultimate from wiping the team if deployed with perfect timing. It might even make her a better Nano Boost target since she’ll be able to block for herself while melting the enemy team into pudding.

The other change mentioned in the developer video has nothing to do with Symmetra, though it’s a welcome social feature. Players can now vote to stay together after a match ends, and any players who vote to do so will be automatically added to a group. If you find yourself gelling within a pickup group, this is a great way to keep playing with them without the hassle of having to add each other to friends lists.

It’s unclear when these changes will make their way to the main game and the console versions, but I’m definitely looking forward to them. In a way it’s kind of a shame, though; I’ve rather enjoyed abusing people who underestimate Symmetra’s damage potential.