After I spent about a week of frustrated time getting Dragon Quest X to run on my PC, I looked at my collection of Dragon Quest games and was a bit dismayed. I own at least one version of every Dragon Quest game in the main series and a couple of odd spinoffs. And despite the fact I have Dragon Quest XI pre-ordered for the PlayStation 4, my collection feels incomplete without the 3DS version in tow, regardless of it actually being localized or not (which all sources say is never going to happen.)

I mean, the PS4 version is supposed to be “superior” because obviously, it has better graphics. So better game, right? While the PS4 version does look absolutely jaw-dropping and is probably the most living portrayal of Toriyama’s style since Dragon Quest VIII, (X though really, but let’s be honest, very few people have experienced that one so who cares) the 3DS implementation of DQXI is no slouch.

So I did what any manchild in his thirties with a directionless life would; I bought a Japanese New Nintendo 3DS from a friend, complete with beautiful Kirby themed faceplate, and imported a copy of the game. 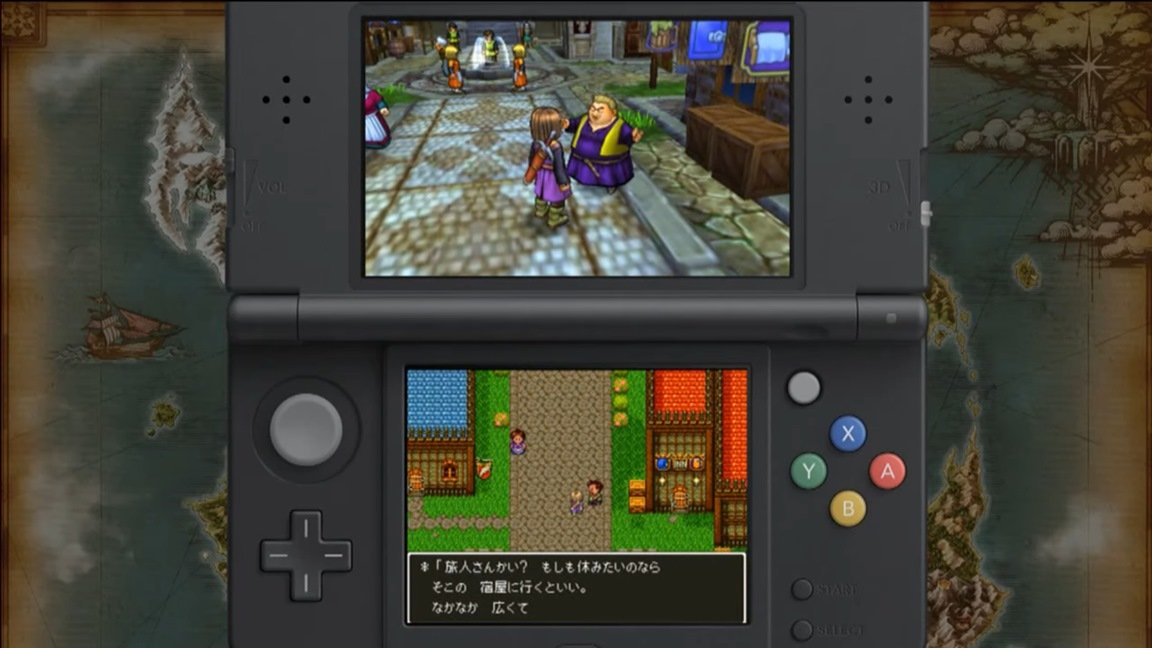 I played through about two chapters of Dragon Quest XI to see what it was all about in conjunction with viewing footage and reading articles about the game to get my bearings. I don’t want to jump into spoilers because the truth is, both versions of the game are supposed to be identical in story, right down to their dialogue trees. So I will try to be as vague as possible and talk more about the games systems instead. However, if you are wanting to avoid any and all spoilers no matter how minor, you may want to give this one a pass until you have had time to spend with Dragon Quest XI in September.

It’s important to note how similar XI actually is to X, and just how much of a change this will likely be for people whose last experience was relegated to Dragon Quest VIII on the PlayStation 2. With VIII being one of the more prolific games in the series thanks to a bundleddemo for Final Fantasy XII, it has sort of become the benchmark by which most judge the series with the oddball Dragon Quest IX being considered a strange bastard child by those same standards. But XI is, for all intents and purposes, more similar to both IX and X than it is VIII in terms of its more linear world map and areas.

I will say this much; I don’t really miss trotting around big empty landscapes. In VIII, the world map is often well designed enough to avoid this some of the time, but I do prefer the more restrictive style of titles such as Dragon Quest VII, where it’s usually pretty clear visually where you should be going. I don’t love getting lost in big empty fields with nothing to do. The world map of DQXI on 3DS is bustling with life, visible on screen enemies which are quite animated, and is most importantly, very concise and straightforward. This is going to be less so to a degree in XI for PS4 where the maps are supposed to be a bit more lavish, but most of what I have heard indicates it will still be a more limited world than VIII ever was.

What is certainly more traditional in XI is the battle system. It is turn-basedand about as familiar as it gets for fans of the series. The narrative also runs parallel toVIII, telling of a deeper, more cinematic story. Dragon Quest is generally about the little people; the towns and places you visit, the folks who you help along the way.

This has essentially been the formula in every title past the first few games, but Dragon Quest XI has more of a “call to action” tone in mind here. The first hour or two were genuinely more exciting and compelling than any other DQ game I have played, despite the obvious language barrier. For people who like everything about DQ except its focus on grinding, I think this could be the one that finally draws them in.

DQXI does something else interesting in its first hour or two; it acts as a demo for its own unique system of visual styles. Instead of offering only 3D movement and battles, the game can also be played entirely in 2D, complete with top-down overworld featuring characters and enemies represented as 16-bit sprites both in the field and in battle. It’s beautiful to see this in action, and for the first couple of hours of game time, both modes can be seen running simultaneously on the top and bottom screen, with battles changeable to 2D and back with the click of a menu item.

The omission here for importers which could make 2D a dealbreaker is that the 2D mode omits the presence of furigana, simpler Japanese characters overtop of kanji to make reading easier for school-aged children. After the first two hours, you will need to change between the two modes at a church, and the biggest disappointment with the 2D mode is the lack of enemy animations, though easily forgivable considering they essentially packed two games into one here.

Visually the game is beautiful. It is a mix of the visual style of VIII and IX essentially, with characters being a bit more condensed and “chibi” in their representation. But darn does it ever look nice, even though it’s nothing like the outright spectacle of its PS4 counterpart.

The biggest loss we are going to suffer by not being able to play the 3DS version of XI is a series of additional areas based on all ten of the original Dragon Quest games, in their original visual style. Some of these, such as the one from DQX,are not very impressive. But as a DQ fan, it would have been quite the homage to witness. DQXI for the PS4 will have some other mini-game in its place, but it looks like it will be a far cry from the uniqueness of these 3DS exclusive modes.

All in all, like much of I am talking about this week, I am a bit bummed that we simply will not get this version here. It’s unknown at this time what the Nintendo Switch version of DQXI will be like, and if it will implement the missing features or offer a combination of both versions of the game in some ultimate edition. And if we want to keep seeing Dragon Quest games released in the west, it may not be a good idea to hold off on one version with the expectation that the next might be more complete.

Like Dragon Quest X though, importers should be wary. The 3DS is region locked, so you may need new hardware to play this one. We are arguably getting the “better” version anyways. Those who wanted this version will probably already own it, and though I can’t say I regret it certainly, I’m not eager to play anymore in a language I don’t well understand. With some cool additions, it is possible that the 3DS version might be the best version of Dragon Quest XI. All I know in my short time with it is that whatever we get will be a treat; whatever the platform, this one has the potential to be the best Dragon Quest game in the series yet.