It’s been a trying week, hasn’t it? Aren’t they all? But you’ve made it. Maybe, if you’re looking for something to feel good about this morning, that’s enough. Let’s try to be better next week. Barring that, let’s at least all make it through. Together.

What if Nintendo put some games on Steam? – Jonathan Holmes

Holmes muses on the possibility of Nintendo putting games, mostly older ones, on Steam. Hmm. Not a bad idea?

A lot of people in the industry have ideas for how Nintendo can better acclimate to this new consumer climate, though their ideas for how to do that are often times awful. Making games for the iPhone, abandoning their own home consoles to make PS4/Xbox One games — these ideas are often taken from a completely narcissistic and self serving perspective. “I don’t want to buy a 3DS or a Wii U, so why doesn’t Nintendo start making games for other platforms, those jerks!” It’s a ridiculous notion that would only hurt Nintendo’s reputation (and pocket book) in the long run. Just look at Sega, SNK, and Atari. Today, they’re nothing compared to back when they managed their own platforms.

What was 3D Realms thinking with the Duke Nukem fiasco? – Brett Makedonski

3D Realms and Gearbox are fighting over Duke Nukem. Because the world is a joke.

With this week’s news that Gearbox Software has filed a lawsuit against 3D Realms and Interceptor for unauthorized use of the Duke Nukem property, it raises the question – exactly what the hell are 3D Realms and Interceptor doing? The question is multifaceted, both in terms of legality and the current status of the Duke Nukem brand. Of course, there’s no clear answer, because everything they’re doing seems to be ill-advised.

Austin Wintory: Everyone has the potential to make music – Dale North

Journey was composed on a $50 crappy Casio keyboard – Dale North

Dale had a great chat with Austin Wintory, the composer behind Journey, Monaco and The Banner Saga. He’s humble, genuine, and has some warm, Ratatouille-like messages of how anyone can do whatever the heck they want, if they try. And Journey was composed on a $50 keyboard. So cool.

So I get very weary when people try to be super effusive of that sort of praise because I don’t actually believe it to be true. I generally don’t think I’m a great composer. I think I’m a terrible composer, but I’m good at making sure that people don’t hear 99% of what I write. [laughs]

This new PC release of Resident Evil 4 is probably the best way you could spend your time this weekend. It’s still fantastic. Screw loved ones, obligations, and the encroaching realization thay life is futile. Play Resident Evil 4.

Resident Evil 4 is a nice reminder of a Capcom that was inventive and wonderful. Of a time when a fairly big name series could innovate rather than follow its predecessor and add more bloom. Of a Capcom before Resident Evil 5, which I think is just awful.

On this show, I draw horrible pictures of things vaguely related to what’s going on in the world of video games. Today’s subject is the recent news of Gearbox Software’s lawsuit against Interceptor Entertainment and 3D Realms over Duke Nukem: Mass Destruction, but more specifically on a comment made by Destructoid community member Red Morgan.

About this time last year, Watchdogs was looking like a major contender for my 2013 GOTY. However, here we are almost a quarter of the way through 2014, and I still haven’t gotten my hands on the game, so I’ve been forced to entertain myself with my own stupid imagination. Today, my stupid imagination conjured up the desire to see Watchdogs DLC based on the 1995 film Hackers, and unfortunately, I decided to make a video about it.

Yoshi’s New Island shakes the Yoshi’s Island canon down to its foundation. It turns out the stork dropped Baby Mario and Baby Luigi off at the wrong house. Not the momma! as it were. Then Baby Luigi goes and gets himself kidnapped and it’s up to Mario and Yoshi to bring him home as they make difficult choices that will test you morality and leave you second guessing yourself for days. … There is some “new” here, though less than the name implies. You can have ice breath or a gigantic egg. Obvious are the transformations, which are mostly tilt-based and don’t look all that fun or engaging. I got to try out Yoshi as a hot air balloon. He can also become a sub or a bobsled.

But it’s not a detective game, which is sad to me, because it’s what I was holding out for. Rather, it’s more of an exploration-based narrative game. You play the ultimate voyeur, getting into peoples’ bodies and minds, whether or not they have anything to do with your case. It seems mostly about wandering about as a ghost in between bits that will drive the narrative and finger your culprit as you unravel the ghastly elements, weird glyphs, and history of Salem. It’s all related, assuredly.

At that point, it’s really on the story-telling to deliver all the way through and make dying worthwhile. We’ll have to wait until June to know for certain.

Wolfenstein: The New Order is as middling as I feared – Abel Girmay

Here’s the long and short of it. My time with Wolfenstein: The New Order left me with nothing to write home, or you readers, about. It looked and played like a thoroughly competent first-person shooter with more than a fair amount of blemishes and the A.I. can be dumb as rocks until it decides to put Stephen Hawking’s IQ to shame. 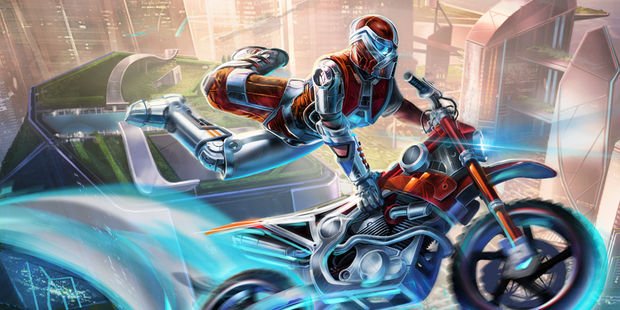 With Trials: Fusion set for release on April 16, there’s much to like about this installment. In many ways, this feels like a Trials game without the limitations of budget or technological. Though there were a number of numerous bugs that need fixing, such has freezing during loading screens and some rather odd physics based glitches that were distracting during gameplay. Despite all this, Fusion is still looking pretty good, all things considered.

Do you have Playstation Plus? Because depending on where you live, you can get a bunch of fun free games next month. Do you like Secret of Mana? Because too bad, the newest game is a F2P mobile game. Are you into Gundam? Well, Dynasty Warriors: Gundam Reborn is coming to PS3 this summer. Are you stoked on Razor Scooters and Tony Hawk? Well, both of those things are getting new games, because apparently 2014 is the new 1999. Finally, Pokémon is hitting Netflix, and to celebrate, Nintendo is retiring all online play for the Wii and DS.

Nintendo of Japan has announced that they’re ending all DS and Wii online services for games that took advantage of the capability. You’ll still be able to access things like the DSi and Wii Shop channels, Hulu, YouTube, and access the internet via the respective browsers. You just won’t be able to play any games online with others anymore.

When asked if he expects a gay lead in AAA games anytime soon, Soulban, was less positive. ‘Oh boy. I think the real question is,When are going to get a gay/lesbian AAA hero(ine) who isn’t a one-off joke?

‘Not for a while, I suspect, because of fears that it’ll impact sales. So either we’ll see a bait-and-switch like the original Metroid with Samus Aran where we’ll find out damn near after the fact (PS: And Dumbledore was gay), or it’ll come out of left field with Rockstar, Valve, Naughty Dog or Telltale, perhaps.’