What’s with people who refer to salad and/or vegetables as “rabbit food?” It’s always malevolent. “I don’t eat that rabbit food,” they seem to hiss. Why are they so god damn pissed off at rabbits? Does one species of animal enjoying a food preclude them from doing so? Why rabbits? Why not, “I don’t eat that zebra food?” I blame Reagan.

Opinion: Titanfall’s campaign failed to draw me into its universe – Chris Carter

Respawn has apparently hyped up its online integrated Titanfall as revolutionary, even going as far as name dropping Half Life in comparison. I didn’t even know Titanfall was going to have any sort of “campaign,” weird online integration or not. Chris Carter argues it might as well not have.

At the end of the day the campaign isn’t offensive, because I still had fun playing the core multiplayer matches that were built into it. But if the intention was to create interest in the world, its characters, and its narrative — it failed. For me, punching a bunch of giant robots with another giant robot and flying around with a jetpack is damn good fun. But if you’re looking for something more than that, don’t look to Titanfall. 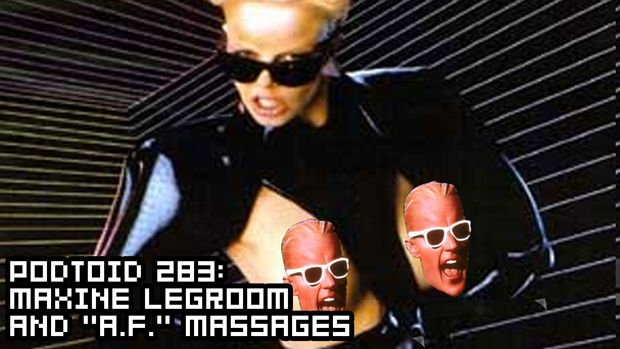 After a longer-than-normal hiatus, the gang is back together this week to discuss Max’s trip to Japan, Jonathan’s old dirty magazines, Caitlin’s casting choices for The Last of Us movie, and Conrad’s beard compatibility.

Get your direct download here, and as always, you can find us on iTunes.

Man, you guys hear about Shaq-Fu: A Legend Reborn? That’s a pretty great idea, but here are some even better ones, like a game where James Van Der Beek’s head is a Hydro Thunder boat, or where the cast of Love Actually beats each other to death.

On this episode of Hardline, I was reunited with my good friends Steven Hansen and Hamza Aziz for a lengthy chat about Sony entering the virtual-reality headset market ahead of rumors that an announcement will happen next week at GDC. Is this destined to be another peripheral the company eventually abandons? We’re worried that might be the case.

Steven said things about the Final Fantasy series which may or may not make you want to form an angry mob.

Two week’s ago on Sup Holmes (now on iTunes), we welcomed Molly Carroll to the program. Molly used to be a big part of the Dtoid Forums community before moving on to become community manager at Chucklefish (Starbound). We talked about how Molly got into the game industry, the role that she plays in the development of Starbound, how to develop and maintain a passionate and creative community around your game, the stuff that happened when the Mighty Number 9 community manager was announced, her pending move to England, and a lot more.

Today on Fart’s ‘N’ Crafts, I’m drawing Godzilla and Big Boss fighting! Or hanging out. Or something. This suggestion comes by way of Nicholas Layne on YouTube, thanks Nick!

If you’d like to buy a print of this drawing, you can pick one up right here!

Razors are too expensive. That’s why I switched to an old school safety razor a year ago. It cost two dollars, the blades themselves cost less than a quarter, and it works better than your $30 Gillete seven blade cartridge with microbrew euthanasia bologna.

Every time I see a razor blade in person I have to pick it up. Those things are dangerous and shouldn’t be left lying about. Kids could put them in their mouth or pigeons could weaponize them. Maybe mobsters will smuggle them into prisons to slice their garlic.

The same thing happens when I see a Razer Blade. I try to keep tech fetishization to a minimum, but seeing a sort of pretty, svelte laptop playing Sleeping Dogs at 3200 x 1800, I can’t help but be a little bit impressed. I pick up the Blade just to make sure it isn’t attached to the desk it’s on with secret desk innards powering it. Nope, it’s a for-real laptop, lighter and thinner than what I’m writing on now and I can barely run Portal.

Jordan has been playing a lot of Garden Warfare. It’s surprisingly fun, apparently, in a colorful and zany Team Fortress 2 sort of way.

With all of that said, I don’t feel like you can go wrong with any of the platforms. For its faults, the Xbox 360 game is $29.99, down from the Xbox One version’s $39.99 price point. And while Garden Warfare hasn’t been dated for PC yet, that’ll likely be the superior version in terms of performance. (If you don’t mind playing via Electronic Arts’ Origin, that is.)

As a ranged player at heart, I always relish the ability to play as yet another caster. But at the same time, Vel’Koz doesn’t do anything all that exciting, and his squishy nature with zero escapes ensures that he won’t be widely played. I wouldn’t spend Riot Points on him — spend IP instead.

Trendy Entertainment isn’t resting on its laurels, as development of Dungeon Defenders 2 is well under way. The fine folks at Trendy recently sat down with Max Scoville to show of a sizeable chunk of pre-alpha gameplay of the work in progress, and talk about the advancements and changes they are implementing in DD2.

Last week Phil and I got to play through a fairly sizable chunk of the game with Sucker-punch co-founder Chris Zimmerman. Oh my god the game is a ton of fun. Fortunately for all of you lovely kiddos the show was recorded so you get to see Phil and I take play through the game with both good karma and bad karma. It’s surprising how much actually changes depending on your alignment.

Everyone’s off playing Titan Souls or Darkfall or whathaveyou, so news this week is a lot of non-news. The Witcher 3: The Wild Hunt has been delayed, which sucks, but apparently won’t derail Cyberpunk 2077. Sony shakes its head and frowns on the subject of release dates for The Last Guardian and Drive Club, and apparently Watchdogs isn’t late, Ubisoft just told us about it really early. Angry Birds just took a turn for the turn-based, Halfbrick’s latest game is about a bear destroying precious works of art, and there’s an Ouya exclusive on the way where you play as an escaped slave. On the VR front, Valve’s head VR dude has gone over to Oculus, hopefully to develop ways to terrify stars of other HBO series, and Sony’s rumored to be revealing their virtual reality hat at GDC next week.

The PlayStation 4 camera seems to be sold out at every major retailer. Amazon third parties are reselling it at $80 or $90 — a decent chunk above the $60 MSRP. GameStop is doing the same, selling it for $70 in light of the scarcity. Remember when the company was selling Xenoblade for $90?

None of that seems to be of concern to Tamara’s though. She’s not interested in commenting on Anita’s work. She’s an artist, not a critic. I hope people take her words to heart when she says “This is NOT a feminist issue. The specific issue that I have is a creator rights’ issue regarding Fair Use/copyright using internet sources along with journalistic ethics. Don’t cross the streams, folks.”