Check your hype at the door

Well Destructoid, E3 is nearly upon us once again. This is the industry trade show that swings wildly between incredible hype and excitement for the hardware and software to come in the year to a feeling of being dead inside after seeing terrible trailers and awkward presentations.

This year is sure to keep me on edge as I’m utterly confused as to what to expect. On one hand, companies like Nintendo have gone on to clarify that there will be more to see at E3 then just Zelda and the rumor mill has gone into overdrive with all but confirmation of new iterative consoles for PS4 and Xbox One, which means price cuts all around for base models!

On the other hand, there’s still so much we don’t know and plenty that we’ve come to unfortunately expect. Like the same Final Fantasy trailers, the same cringey millennial jokes, grey/brown shooters, and whatever Ubisoft has cooking with that usual half-baked kind of feeling most of its games tend to have. So for a while during the month of May, community members started sharing their expectations for E3 thanks to community member, Wednesday cblog recapper, and resident of North America’s hat Theblondebass. 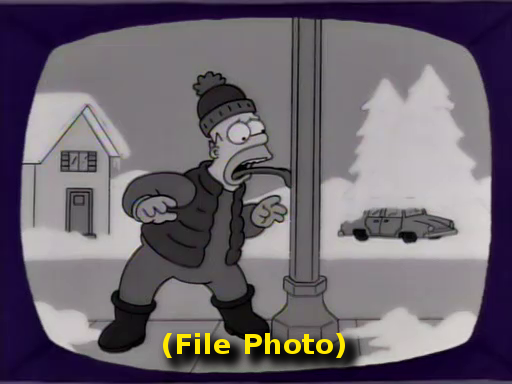 It’s simple, really. With this blank and easy-to-use template, just file in your predictions of E3 with hopes, expectations, and hype among other things. It can be as simple as just adding text to the box to something as generalized, snarky, or as dank as inserting an image into the box. Hell, you don’t even have to work within the confines of the supplied companies as many community members just crop them out with other companies they’re concerned with. As a note, most of these predictions were done in mid-May, so the idea of Nintendo for example doing literally only Zelda was still the common thought process.

So here are some choice report cards from several community members. I hope to see the completed report cards after E3 is done and dead. Here are the pre-E3 report cards, as submitted to me when I made a call out for submissions in Qtoid. They’re all pretty big, so keep in mind you can click on the pictures for the full-sized versions. 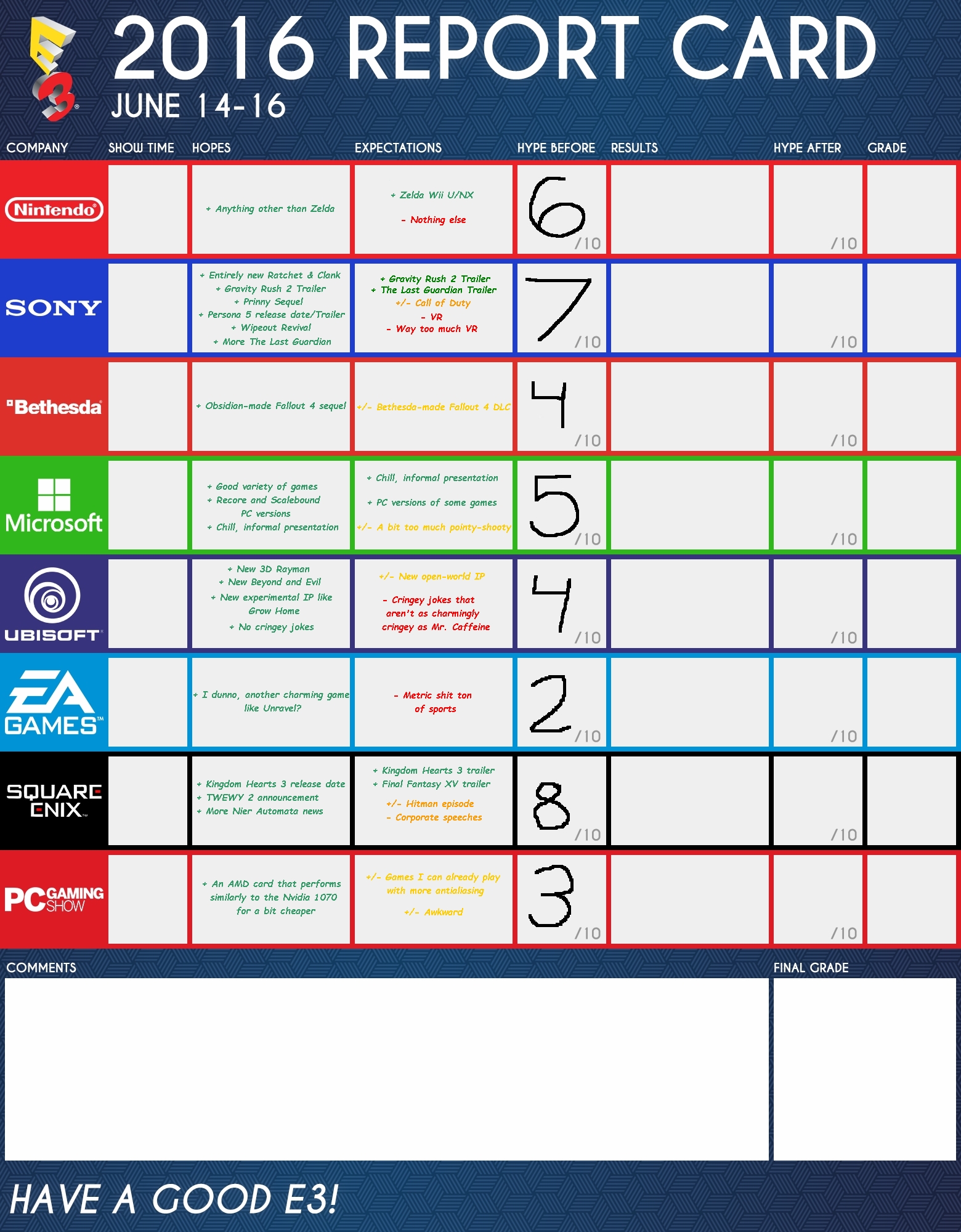 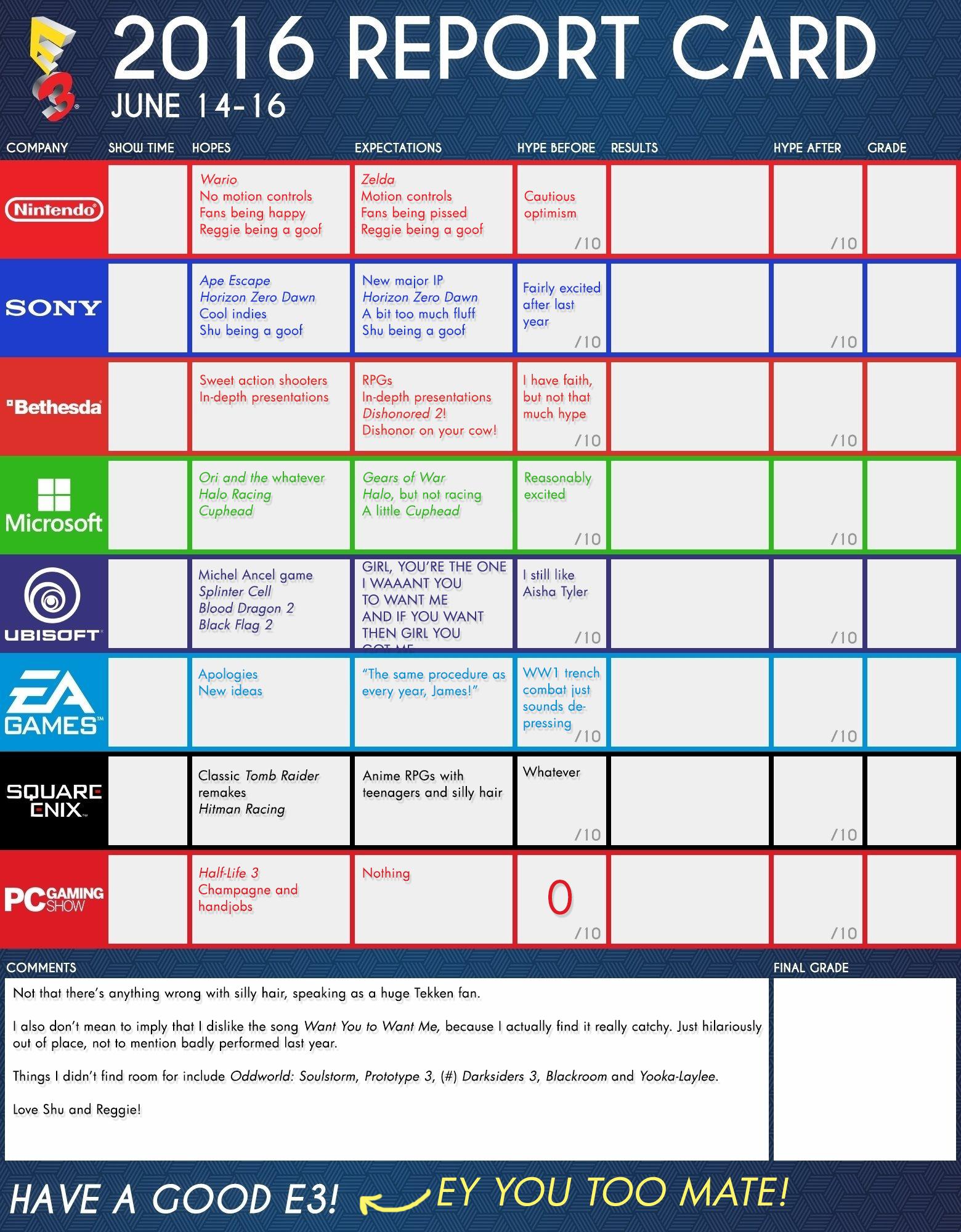 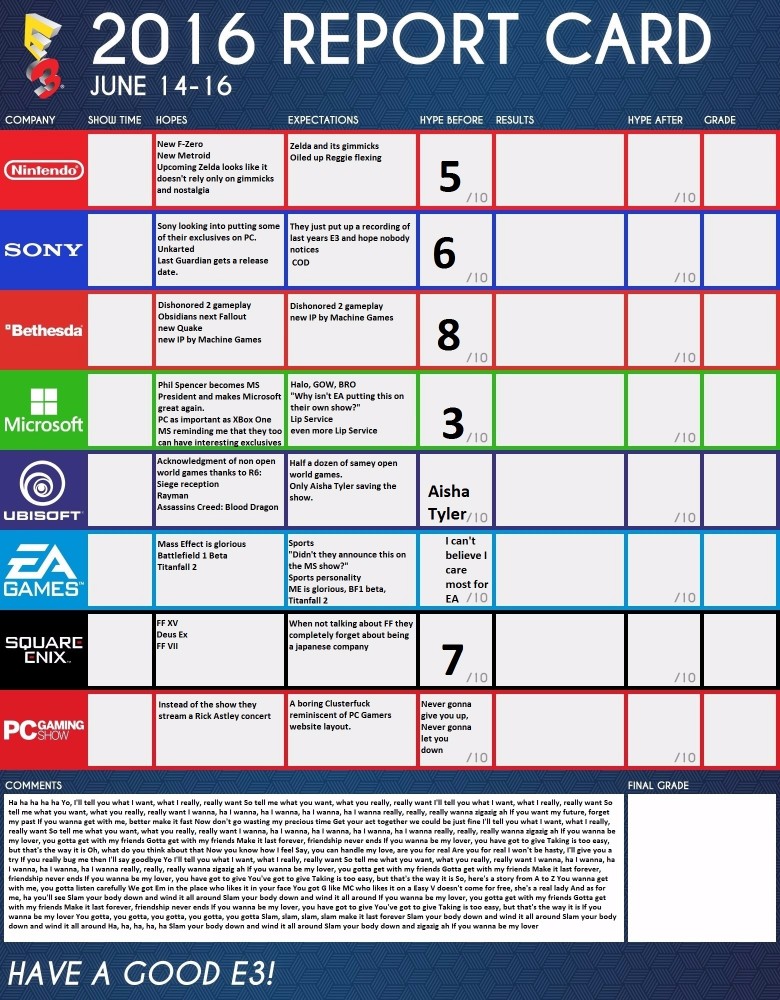 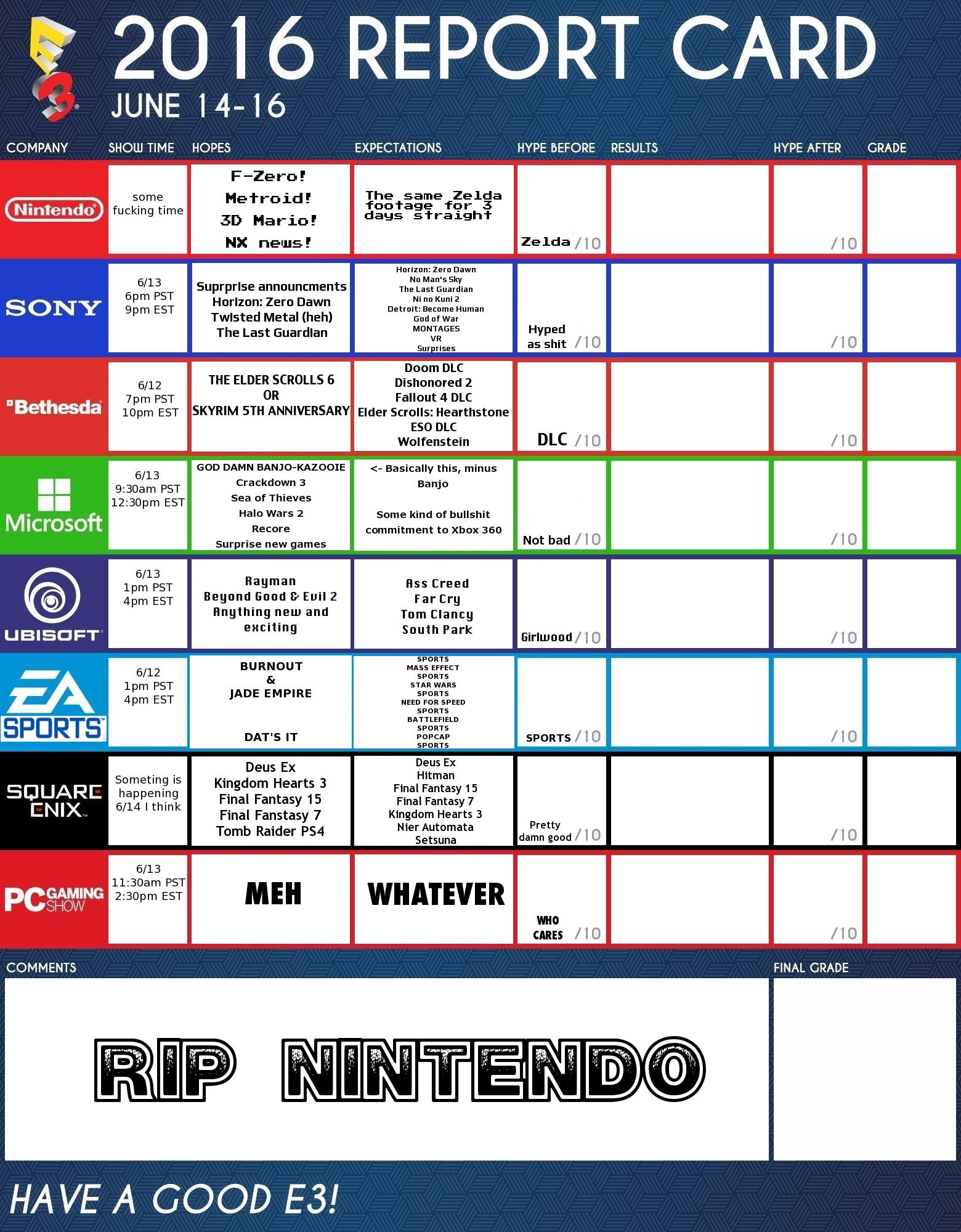 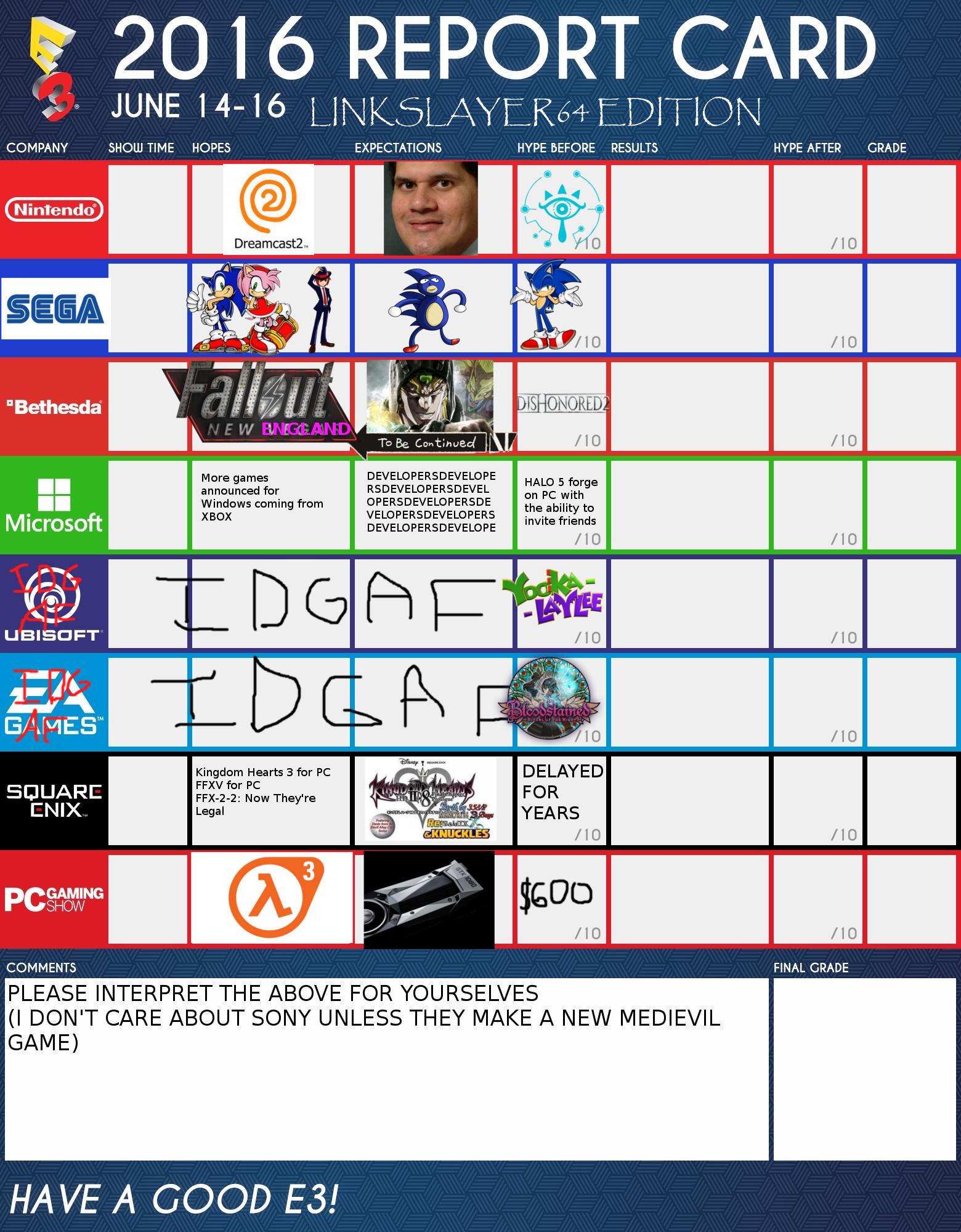 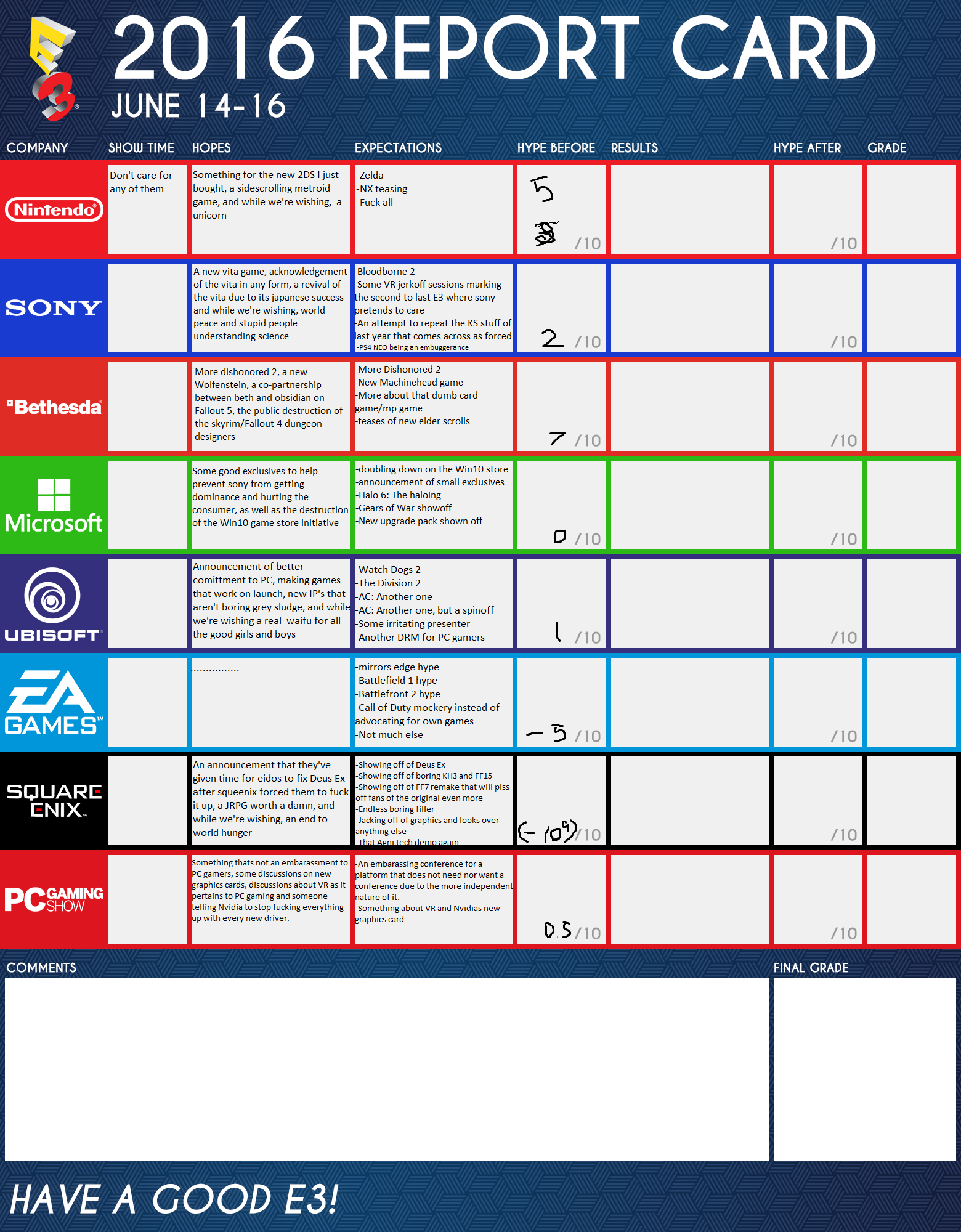 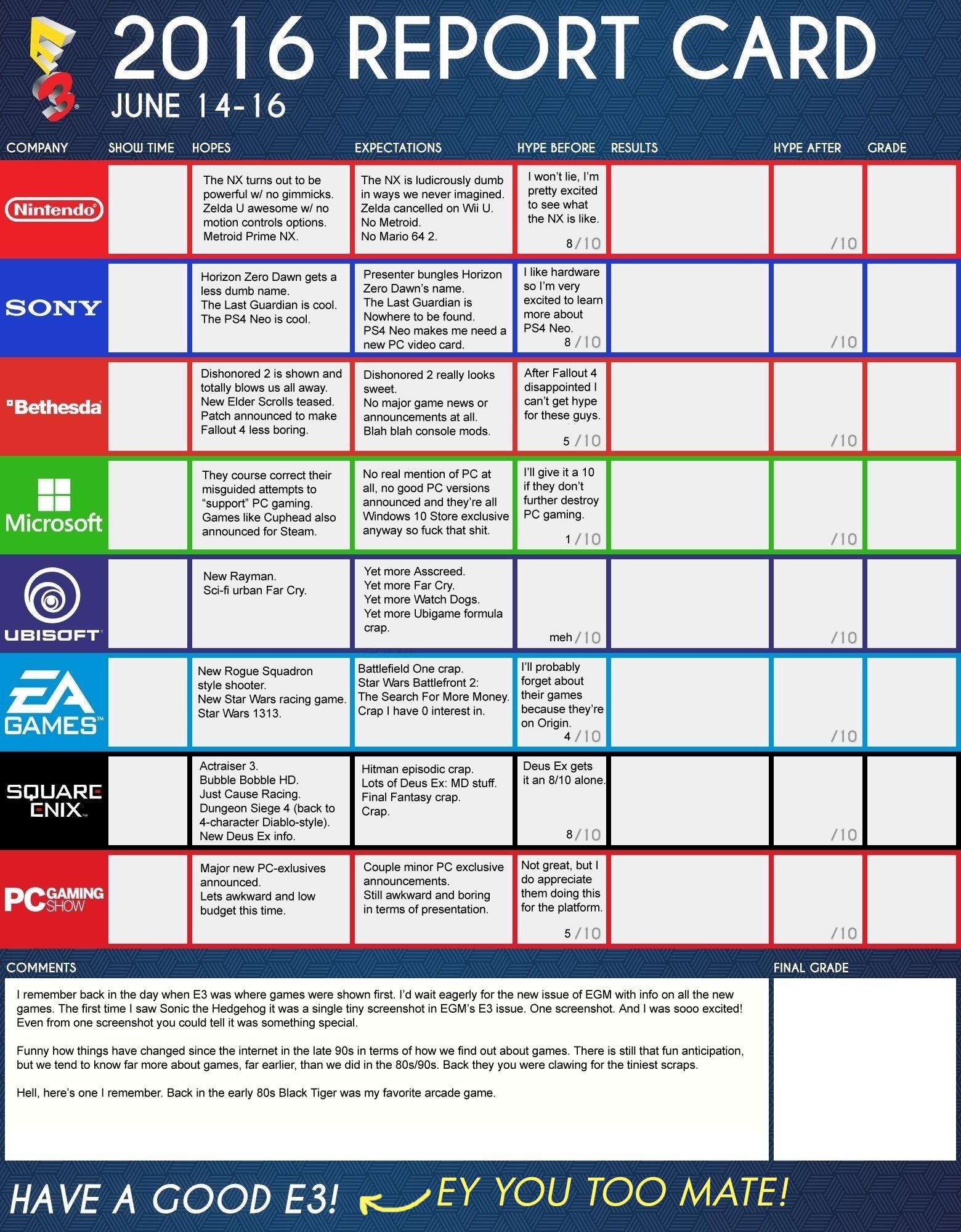 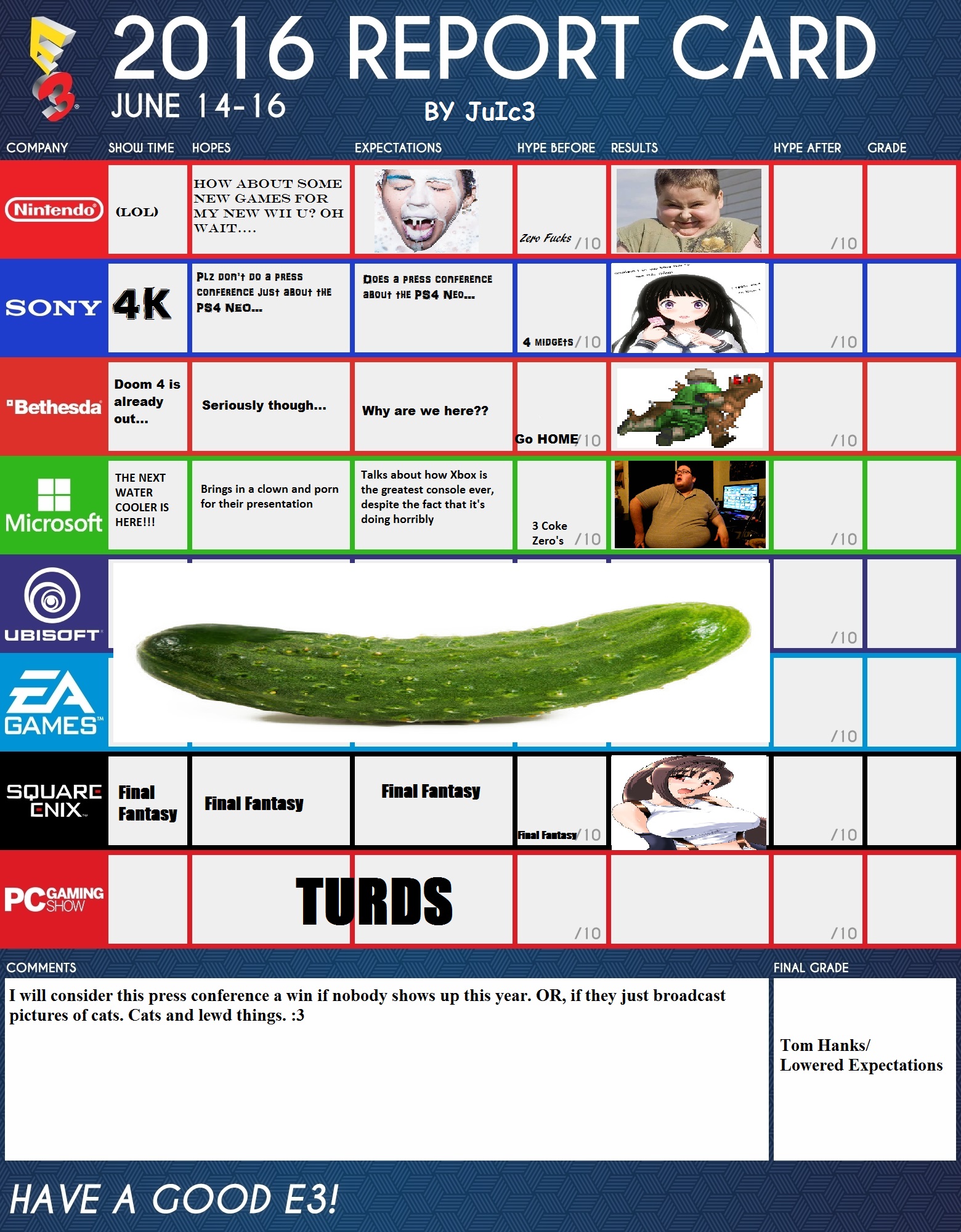 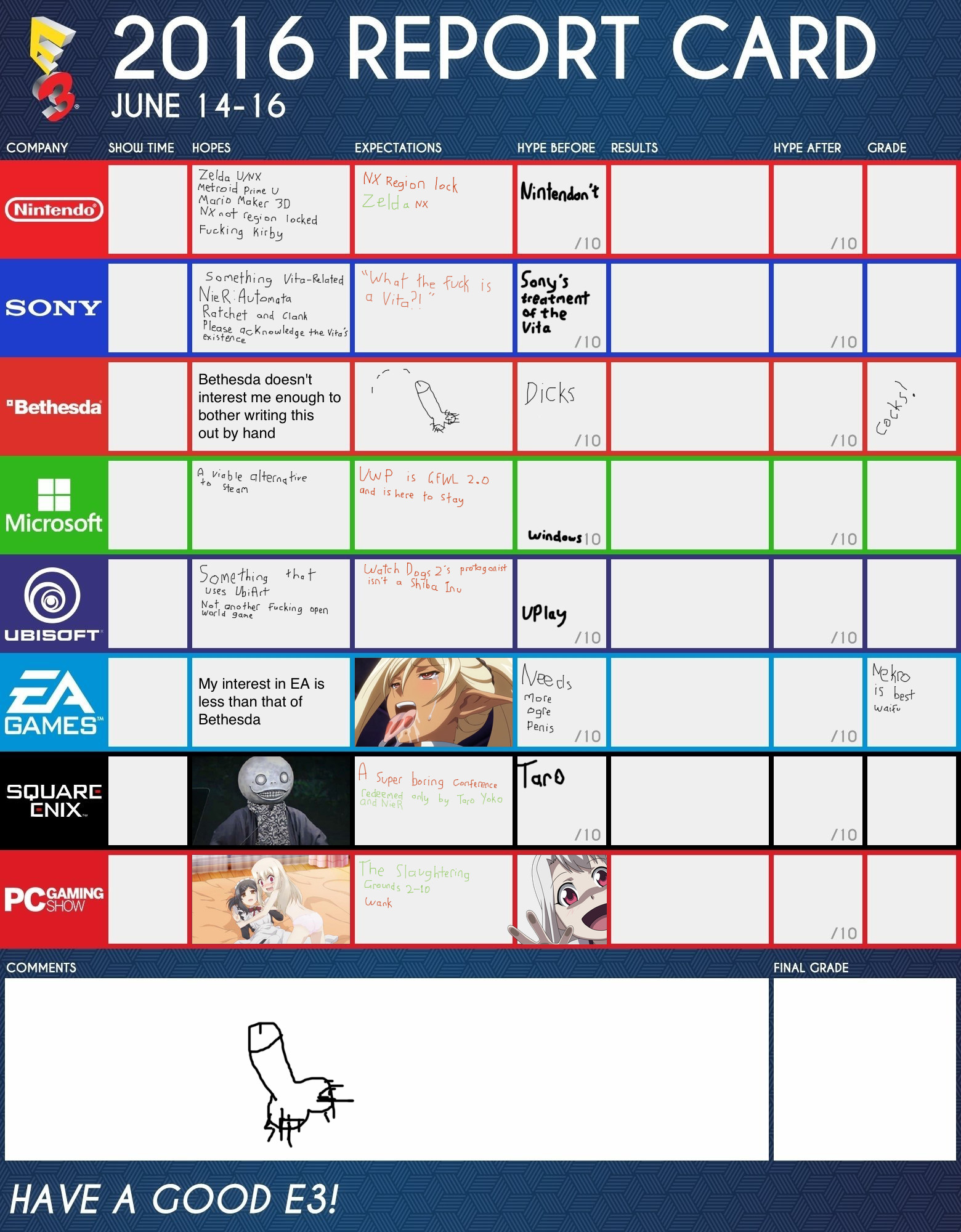 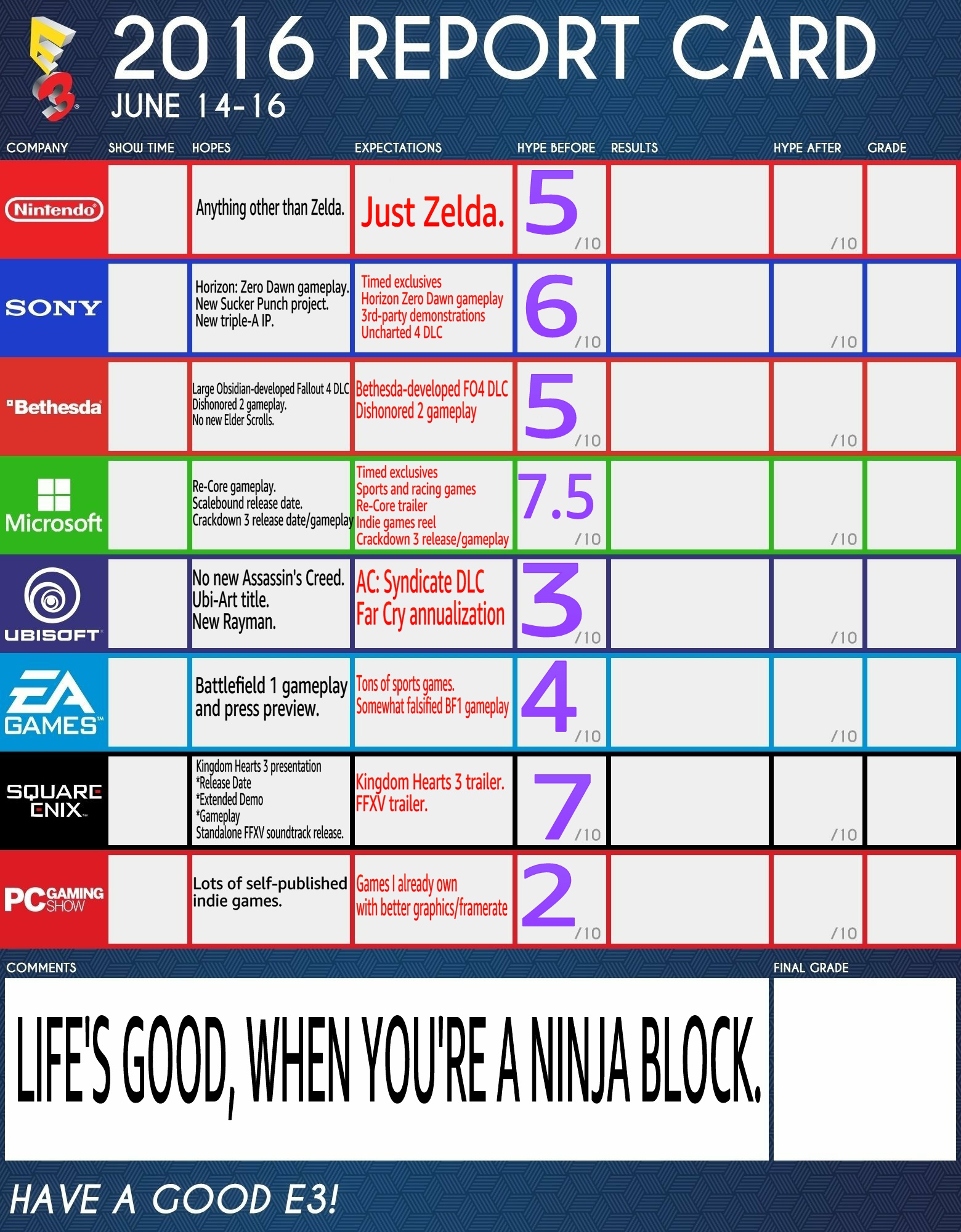 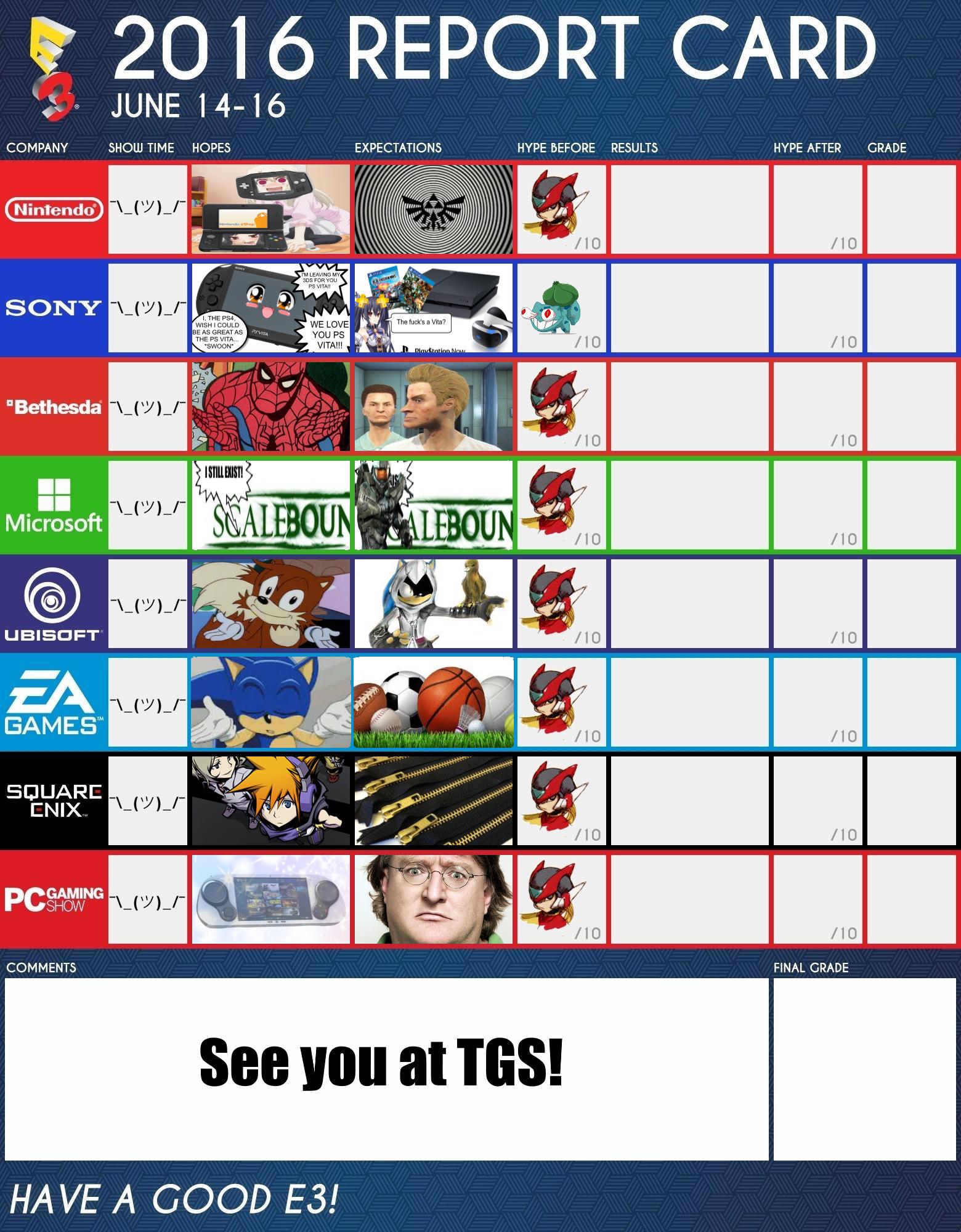 And there were so many more I wish I could share with you but unfortunately I worked with the community on a call for those who wished to submitted theirs (plus a front page post that is mostly pictures is pretty time-consuming and repetitive).