The Last Guardian's director has a message for fans

Acknowledgement that it ‘took longer than anyone expected’

The Last Guardian has had one of the most tumultuous development cycles in recent memory. It started development in 2007 before its announcement as a PlayStation 3 title at E3 in 2009. It was delayed repeatedly before shifting to the next generation of consoles, reintroduced for the PS4 at Sony’s E3 press conference in 2015. Apparently, the PS3’s hardware was insufficient to run The Last Guardian at a reasonable framerate. Before the shift, the game’s director, Fumito Ueda, left Sony. Shortly after, the rest of The Last Guardian‘s developers, Team ICO, went silent, leading some to think the game had been cancelled. Even the PS4 version has been delayed repeatedly, but it looks as though it’s finally, really coming out next week.

With all of that baggage attached, The Last Guardian has a lot of expectations to live up to. It’s hard to work on anything for so many years without becoming attached, and it appears as though Mr. Ueda realizes that many people have been looking forward to The Last Guardian for a very long time. That’s why the media kit for the game included a letter to fans who’ve had no choice but to wait patiently, posted first by Eurogamer: 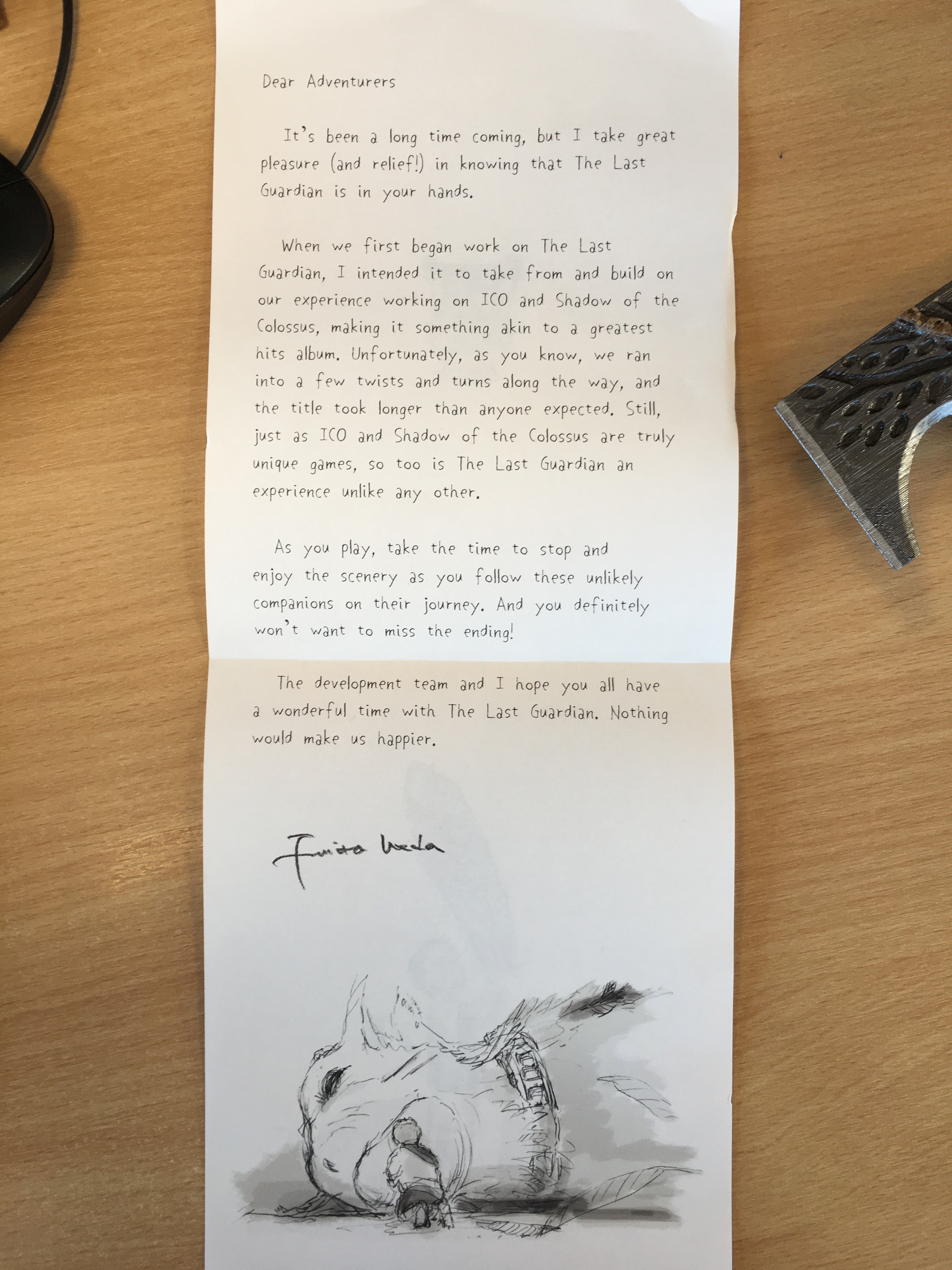 In case you can’t read the message, the full text is posted after the break. The letter mentions Ueda’s “relief” that the project is finished, as well as the many “twists and turns” that have come between The Last Guardian‘s inception and the finished product. Ueda’s message closes with a sketch of Trico, the titular Guardian.

It’s been a long time coming, but I take great pleasure (and relief!) in knowing that The Last Guardian is in your hands.

When we first began work on The Last Guardian, I intended it to take from and build on our experience working in ICO and Shadow of the Colossus, making it something akin to a greatest hits album. Unfortunately, as you know, we ran into a few twists and turns along the way, and the title took longer than anyone expected. Still, just as ICO and Shadow of the Colossus are truly unique games, so too is The Last Guardian an experience unlike any other.

As you play, take the time to stop and enjoy the scenery as you follow these unlikely companions on their journey. And you definitely won’t want to miss the ending!

The development team and I hope you all have a wonderful time with The Last Guardian. Nothing would make us happier.