My personal game of the show

When I first heard that Nintendo was planning to focus exclusively on The Legend of Zelda: Breath of the Wild for its E3 2016 booth, I triple-checked the wording. Only hands-on with Zelda? Really? That can’t possibly be right! But it was, and it sounded ridiculous — up until the show floor opened.

Less than one minute into E3, the line to play was already hours long, and it never let up all week. Nintendo’s eyebrow-raising risk paid off exceptionally. Days later (the final of the convention, in fact), I got a chance to try Zelda and watch Steven play some, too. What a strong note to end on.

This game feels like an adventure. Not a typical adventure where you see and do cool things and become a badass exactly the way the creators envisioned you would, but a true, limitless-feeling journey full of emergent possibilities. It brought me back to the way I saw my favorite games as a kid. Back then, my imagination made everything seem bigger and more exciting than it actually was. Technology has caught up. In Zelda‘s case, it really is that big. It really is that exciting.

I imagine I could’ve spent a full day with the demo Nintendo brought and still not seen it all. Every time I caught a glimpse of the folks playing on nearby screens, they were doing wildly different things than me. Some Links were shirtless, undoubtedly a little chilly due to the new temperature mechanic. Others were climbing on the back of a stone golem boss, Shadow of the Colossus style, stabbing its shoulder. A few were solving puzzles in some of the game’s many, many dungeon-like shrines.

For my part, I became obsessed with the idea of slaying a half-buried, rust-covered Guardian. Here’s the scene: It could turn its head in a full circle and charge up a devastating laser attack, but there were nearby stone blocks to hide behind. I had a bow and arrows to stun its charge-up and get several good sword swings in. A relatively easy fight to work out, then. You would think! I never did beat it.

In Breath of the Wild, you have to prepare — for fights, for your environment, for changing weather conditions — and I was not sufficiently prepared. You’re able to hold a bunch of weapons with variable power ratings, but they quickly break (as do bows and shields), especially against something with as much health as this foe. I ran out of arrows, burned through my best swords, and ate every healing item I had cooked earlier at a campfire using bits of flesh from fallen foes. So rather than run away and recoup, I figured I’d die a warrior’s death. The ancient machine one-shotted me and its laser blast sparked flames that jumped across the grass and lit up my corpse. It was awesome.

On that note, the unencumbered, free-roaming Guardians are going to be terrifying. 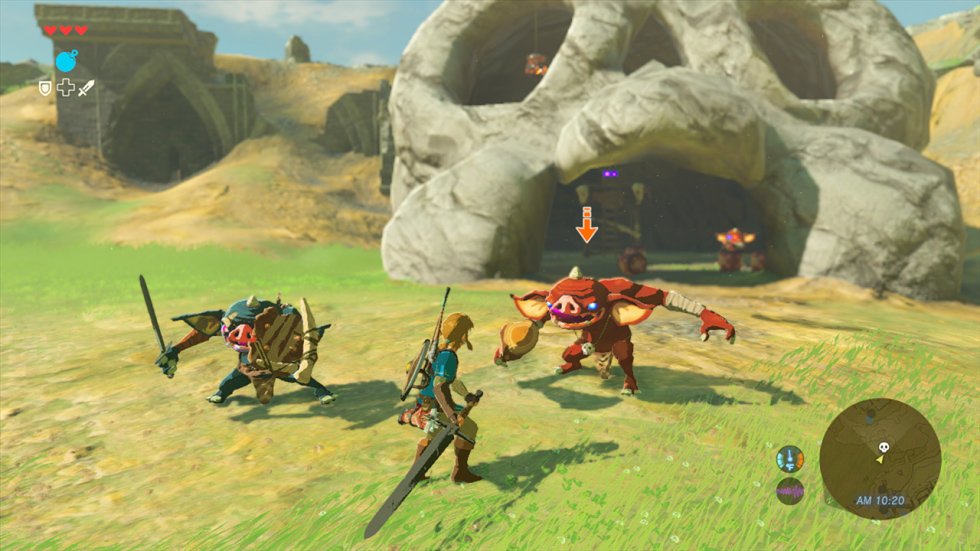 My other favorite moment was another disaster.

I found a small group of bat-faced Bokoblin holed in a skull-like rock formation, just like in this picture. It’s possible to sneak up on enemies and stealth-strike them for extra damage, which would have been a wise idea, but instead I decided this was the perfect opportunity to try summoning Wolf Link for the first time using his amiibo. Not two seconds after I brought him into this world, the dang dog howled. After alerting the whole group, he proceeded to run laps as I did most of the fighting myself.

I still love him, despite not knowing how he and Link can exist simultaneously, but c’mon, man!

The bulk of my playthrough was similarly spent screwing around while learning the ropes. I chopped down trees and ran from bees. I climbed a tower, almost slipping off as I pushed my stamina to its limit. I had fun messing with Link’s magnet item (which let’s you pick up and freely move metallic objects) as well as his round bomb that, whoops, the wind can send rolling away. I comically scarfed down a bunch of mushrooms to replenish hearts. I combined random items to cook potions that gave me time-limited buffs. I smacked some skeletons with their dead friend’s arm. You know, the usual.

I never got a horse, which was a letdown, and I forgot to ask the Nintendo rep how to ride my shield like a snowboard down a hill. I also didn’t see any NPCs (if there even were any in the demo) or do approximately one billion other things I would have liked to try before I was kindly asked to stop.

Zooming out to the full map to compare the slice playable at E3 with the overwhelming sprawl of grayed-out areas was staggering. It’s no wonder production is taking this long. 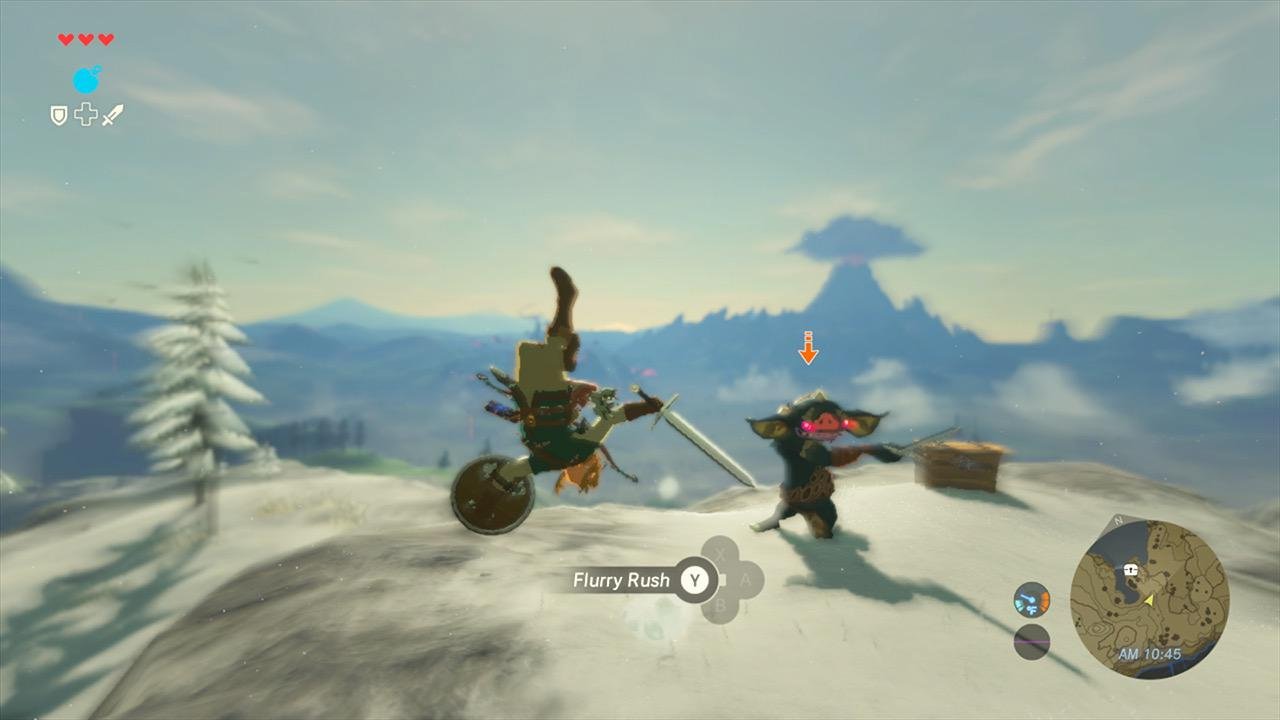 With this first hands-on, I have seen enough to know that 1) I am very much into Nintendo’s big shifts for this installment as a fan of the series but not a die-hard who is unwilling to see risks taken and 2) it’s impossible to tell how well the “open-air” formula will hold up across the entire adventure. I adore Metal Gear Solid V: The Phantom Pain — another systems-driven sandbox, and a masterful one at that — but even it grew repetitious for me by the end. That’s the main fear.

Thinking ahead, I’m most curious about Zelda‘s story (more in terms of what role it will play, not the actual narrative beats or timeline), how much genuine variation the world will offer, and whether or not there’s going to be a way to work around the durability system (either with potions, or some sort of unbreakable weapon, or whatever). Also, the NX version — so many questions.

While I don’t know what Breath of the Wild will be like on next year’s console aside from surely looking and running better than the Wii U version present at E3, I’m in. I am totally in. Visually speaking, I think Wii U owners will be happy with the game thanks to its less-realistic art direction — it looks plenty good! — but higher resolutions could do this game absolute wonders.

I want to learn everything I can about Zelda, particularly its kookier mechanics and how they can come together to create some amazing, organic, “Did that just happen?” moments. But I also want to stop right here. To go in as blind as possible from this point on would be such a treat.