Impressions from the first gameplay showing

Sony and Ready at Dawn have been tight-lipped about upcoming PS4 game The Order: 1886 up until now, and even with what they showed us last week, it seems that they’re still just barely scratching the surface. But it’s not like they didn’t want to show us more, or at least that was what I sensed after hearing from Ready at Dawn. It’s just that what we saw was about all they had to show.

This first showing of gameplay is what the industry likes to call a “vertical slice.” This slice of The Order: 1886 wasn’t quite enough to fill me up, but it did serve as a pretty tasty sampler.

They had me at fancy suits and super-ornate gun mashups from the game’s earliest showing. I was pretty much already all-in on The Order: 1886, mostly because its Neo-Victorian London setting is so different from anything else out there. But a nifty setting is nothing without gameplay, and Ready at Dawn knows this. They brought the first playable build to a Sony press event last week to give us a look at where The Order: 1886 is headed for that very reason.

The demo started with a walk through an early section of the game, located in a London enclave called Whitechapel. This is a slummy area that harbors the city’s underworld, and from its rooftops looks pretty much what I’d imagine old London would look like, save for the airships that dot the skyline. Ready at Dawn says that while they strived for authenticity, they did stretch things a bit with these airships as they weren’t around in the 1880s. They pulled them back from the early 1900s and made them believable enough to fit in nicely.

Even in this early state, The Order: 1886 is stunning with its filmic look. The PS4 is providing enough muscle for realistic visuals, but it’s the dust and grit that bring a realistic authenticity to its visuals. Ready at Dawn says that they used virtual lenses differently than you’d normally use in a game, and it definitely shows. Pans and cuts work to help to tell the story, much like they would in a film. The look is quite different than a typical third-person adventure, where the shots are always wide and everything is always in focus.

I did notice some strange artistic choices along these lines in the demo. Early on, a shot from behind cover had the player and his surroundings in focus, but his target blurred out, simulating a shallow depth of field. It certainly looked neat, but keeping the target out of focus doesn’t make sense beyond visual effect.

Ready at Dawn set out to show what they called moment-to-moment gameplay with their demo. They say they’re working to create a seamless experience, allowing the player to flow continuously through cinematics, traversal, navigation, gunplay, melee, walk and talk bits, and more. This short hands-off demo seemed to hit all of these marks perfectly. We’ll have to get our own hands on The Order: 1886 to make a real call on how successful they were at this.

Protagonist Galahad and new recruit Lafayette survey the surrounding buildings from a rooftop using a monocular that manages to be both old and mechanical, but also slick and futuristic. They soon spot their target, a hospital some two miles to the west. Before setting out to “join the soiree,” they order up air support. Here, the player will enter a Morse code message using the DualShock 4’s touch pad, tapping out the message “Attention.”

Jumping down in the middle of some old buildings, the game transitions from cinematic to gameplay seamlessly, keeping the filmic look and direction from the cinematics. No swapping takes place, which means that the models you see in the cinematics are the same you’ll see in gameplay. Characters faces are highly detailed and brilliantly animated, the lighting is impossibly realistic, and the movie-like camera work tops the package off, making it so that watching The Order: 1886 in action is a lot like watching a Hollywood movie.

The first showing of gunplay had a character ducking behind cover to avoid fire, in a move not unlike what you’d see in Epic Games’Gears of War. The low, tight following camera also reminded me of Gears of War a bit, though the camera’s movement seemed to be a bit more cinematic. The weapon being used, the Automatische M85, looked to be pretty powerful as it made quick work of the attackers that hid further down a corridor, and had a hefty recoil.

Progressing further in, a one-on-one struggle impressed. It was presented in a way that it looked like it could have been a scene in any action movie with its uncommon camera angles and quick cuts. But it was hard to tell just how much control the player had during this scene. I saw a couple of button prompts during the fight, but it didn’t seem like much more was going on beyond those.

Ready at Dawn later explained that the quick-time events of The Order: 1886 are branching. Passing or failing prompts take players on different paths, leading to different kills and other results. During these events, the camera can move, as can the player. It’s possible to pick up items or weapons in these scenes as well.

Near the end of the demo, the group finds a bunker full of firearms that could support a small army. In opening one of the boxes in this bunker, a sleek semi-automatic rifle was uncovered. Ready at Dawn seems to have aimed for uncommon weapon mashups for The Order: 1886, taking pieces of weapons you might have been able to find back in the late 1800s and mixing them with different elements to make for some interesting yet believable combinations.

There’s no question that The Order: 1886 is a visual stunner, and the setting and weaponry are certainly interesting, but this vertical slice we were shown doesn’t really give us a lot to go on beyond that. Being a hands-off session, we can only assume that the gunplay falls right in line with other current third-person shooters with its cover system and over-the-shoulder perspective. The QTEs are a treat for the eyes, but again we have no idea if they’ll amount to more than a few timed button taps. But what else can we gather from this short showing? 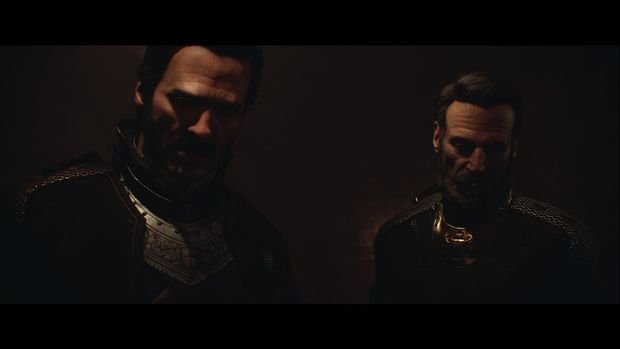 There’s atmosphere and style for days, and the visual effects and direction are outstanding, but nothing about the gameplay has its hooks in me yet. For as nicely packaged as this showing was, it left me craving variety. And if you’ve had your fill of third-person shooters, none of the mechanics shown are going to have you hungry again.

But this was only a slice of The Order: 1886, and it’s still early. If this game ends up playing as good as it looks, the PS4 is going to have a killer new IP on its hands.