Impressions on the little console that almost could

The Ouya is on sale today, and I’ve spent a few days with the final retail unit. For $99, you can get your hands on a cute little cube that runs a selection of Android games, a handful of apps, and is designed for amateur developers to create from home to their heart’s content.

It all sounds very promising, and Ouya is nothing if not promising. It is, in fact, full of all sorts of potential. Just be warned, however, that if you spend $99 today, that’s what you’re getting. Potential.

Potential that may or may not ever be fulfilled. 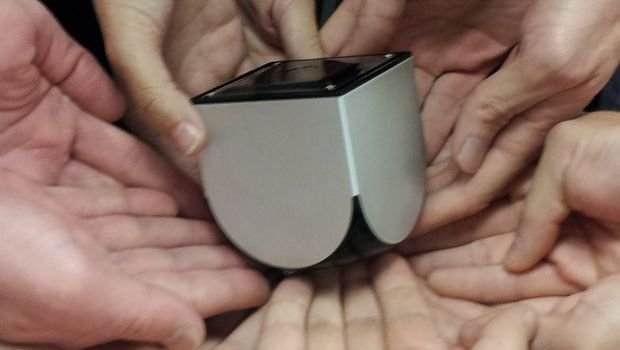 The most adorable console ever

At a squat little 3×3″, and designed as a cube with a curve toward the bottom, the Ouya is certainly a cute little thing. In terms of visual design, I like the box very much. Streamlining and ease of use is a core philosophy of the design, with a setup process so intuitive it’ll take all but the least tech savvy of troglodytes to get it working. Simply pop the provided HDMI cable in the right slots, do the same for the power, and you’re away. I do wish the included cables were longer, but for most homes, that shouldn’t be a problem.

The back of the system — and it’s so small it’s hard to even consider it a “back” — has only ports for the power and HDMI cables, standard USB, micro USB, and an ethernet lead. The one single button is place directly on top of the unit — a large round one for the power. It’s really all you need. 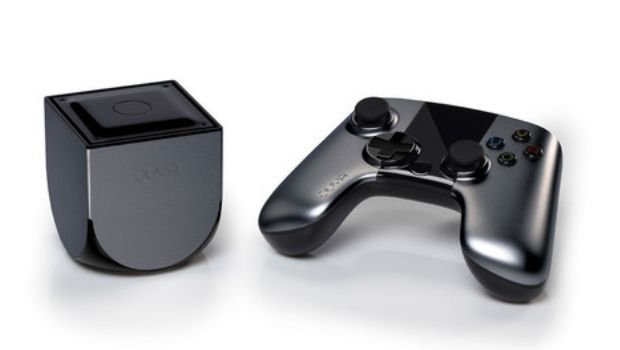 Things fall apart at a basic fundamental level, however — the controller. Reports of lag and a cheap, sticky feel to the controls were a major part of reviews of early “beta” units, and while the Ouya team has gone to lengths to improve these problems, they’re still pretty damn noticeable. First of all, having to remove two separate faceplates to inset batteries on either end of the device makes no good sense to me, and the way the plates ostensibly slough off do little to discredit the “cheap” impression the lightweight plastic gives.

It only gets worse when you actually use the thing. In navigating menus, I found lag to be unnoticeable, and it was fine for playing regular action or role-playing games. As I got further into games like Deep Dungeons of Doom, however, where timing and precision become more important, the Ouya controller simply is not up to the task. Even worse, the face buttons tend to get stuck inside the removable faceplate fairly easily, requiring an extra flick to get them to snap out of their holes.

The controller is also worthless when it comes to turning the system off. Every single time I attempted to remotely power down the Ouya via the controller, it switched itself back on. It got the point where I yanked the power cable out of the wall to make sure the bloody thing stayed off.

The real shame is that, as a controller, it’s not badly designed otherwise. It feels comfortable in the hand, the analog sticks and buttons are well spaced out, and the touchpad is a nice idea, even if it is too small to be useful and suffers even worse lag than the buttons. Many recommend you pair the Ouya with a PS3 or Xbox 360 controller, and I find it hard to disagree — though the lack of a touchpad may screw you over for some games that inexplicably demand its use in menu navigation. 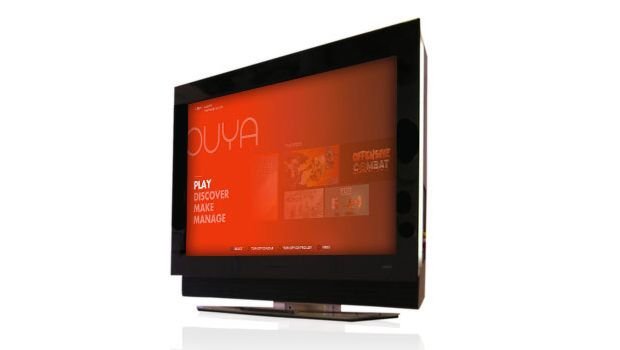 The UI is about as straightforward as you can get. Once you go through the process of downloading any firmware updates (which can take a long time) and entering your credit card information (which I don’t appreciate being asked to do as a first action), you’re tossed into a bright orange menu screen with four distinct items — Play, Discover, Make, and Manage. They all do exactly what you expect, one being the game library, one being the store, one being for developer content, and one housing all the system settings.

Libraries and the store front are simply rows of pictures of games, not enticingly set out, but at the very least functional. The store front can be browsed by genre, though most space is given up to eShop-like gatherings of games by contrived type, such as “couch play for friends” or the confusingly titled “sandbox” group of games that have nothing to do with sandbox play. An elegant layout it isn’t, but it’s no worse than any other console storefront, and it’s generally pretty quick to load as well.

Ouya mandates that every game provide a working demo, and while that’s a noble goal, in practice it leads to a convoluted purchasing system. You cannot buy games from the Ouya marketplace, you can only download demos, and then purchase the full version within each game. Downloading The Bard’s Tale involved downloading the free demo, buying the game from within its main menu, and then waiting almost an entire day for the “additional data” to download — a process that hogged the wi-fi in the house, and kept needing to be jumpstarted due to “connection errors.”

Downloading a large game like The Bard’s Tale, by the way, exposes how little space the Ouya actually has for games. It wasn’t long after nabbing the game that I started being informed the system was too full for anything else. An external hard drive is one storage solution, but in doing so, we must admit the Ouya is a console that needs a third party controller, and a third party storage solution, in order to be viable. Not exactly a great selling point. 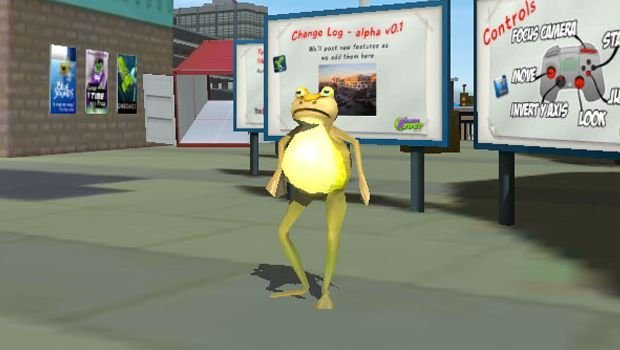 Ouya boasts over 170 games and counting, and while it’s tantalizing to think of playing some awesome mobile games on an HDTV, it only takes a short while to remember exactly why iOS is given more attention as a gaming platform than Android. Most Android games are absolute crap, and some real garbage is already all over the Ouya. Even among the storefront’s most promoted exclusives, there are maybe one or two games worth checking out for even a second. Others, like No Brakes Valet or The Little Crane That Could, are embarrassing.

Ouya’s proprietary market does not have access to the full range of Android games available on Google Play, yet somehow it managed to get its hands on some astoundingly bad dreck. Amazing Frog. Have you tried Amazing Frog? I sincerely urge you, if you’re getting an Ouya, to try Amazing Frog. Go try it now, and come back here.

What the FUCK was that, right?

It’s not all bad, of course. In fact, Ouya’s scored some nice games that I love playing on a television. Canabalt, Pix n’ Rush, and Knightmare Tower are all great fun, and there’s some benefit to playing them on a television with a sound system pumping out their genuinely excellent soundtracks. Even so, however, these games are all designed primarily for touchscreens, and as such there’s always a sense of subtle disconnect between your physical button presses and the onscreen action, even outside of any perceptible lag.

It must also be said that some of the more graphically intensive games run like shit. The Bard’s Tale and Chronoblade, two games that should benefit most from the Ouya, suffer choppy framerates and moments of complete performance breakdown. One hopes further patches can sort this all out, because right now, the games the Ouya needs most to showcase what it can do simply aren’t making it look good at all. 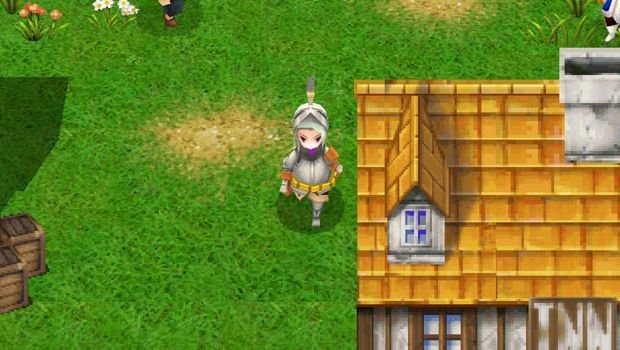 This article has been about as unflattering as one could possibly get, but I want to make it clear I don’t hate the Ouya — not yet, anyway. It’s true, I struggle to find almost anything truly good to say about the thing, and even my praise is littered with important caveats, but I can at least say it works, and for a crowd funded open platform designed with home developers in mind, working is something of an achievement.

As disappointed as I am with the Ouya right now, I still maintain a flicker of excitement for what it could still be, especially once (if) the market becomes populated with homebrew and garage developers. Of course, it could also become a Wild West of utter trash, the Xbox Live Indie Marketplace in console form, but it could also house some genuinely interesting and inventive things.

The Ouya needs a lot of work still, and one wonders exactly how much of that work can be done in firmware updates alone. As of right now, I’d urge all but the most curious to wait and see before dropping even the relatively minor asking price, but I’d still suggest everybody keep an interested eye on it. I honestly want it to improve, and grow into an excellent, successful platform. It’s just not there right now, and it has some ways to go.