We’ve seen some of the key features of The Sims 4since its announcement around this time last year.. We know, for example, how easy it is to create your character, and we’ve seen how they’ve overhauled the game’s build mode. But Maxis has only briefly touched on how you’ll create and develop your character’s goals and emotions. We saw a bit more of how that works at a recent pre-E3 briefing.

Aspirations are long-term goals for a Sim. When you build your character you’ll pick from a selection to start along the path of one of these aspirations, which gives your Sim different goals to complete. You can make your sim athletic or knowledgeable, among others. I saw a demonstration where one Sim was set to become a computer whiz.

Traits come with these aspirations; these abilities and tendencies give your Sim more depth. For example, the “quick learner” trait can help your Sim build skills faster. So while the aspiration gives your Sim its overall goal, the traits under it have an effect on the Sim’s overall personality.

Emotional traits could have your Sim being cranky all the time, and lifestyle traits could make it snobby. Maxis explained that these trait choices will even have an impact on how your Sim moves and feels. 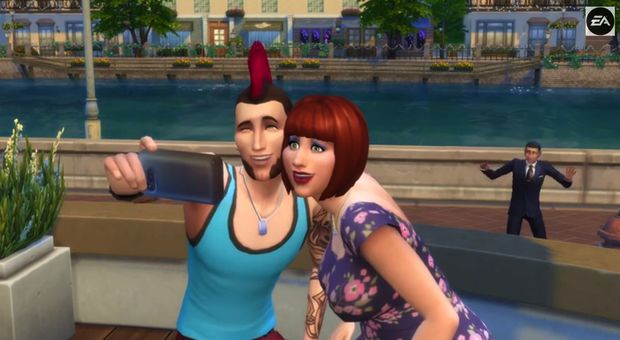 All of this plays into interactions with other Sims. A Sim’s emotional state is affected by chosen interactions, the environment, and those previously mentioned traits. For example, being happy could lead to giving another Sim a heartfelt compliment. If they hit it of, a music-loving trait could have them talking about new albums. Traits can even have Sims building skills faster. That same music lover could pick up piano playing faster than normal, for example.

And while we’re on relationships, for the first time there’s a new relationship track for The Sims 4, giving each a friendship track and a romantic track. This can bring about some interesting situations. I saw an example where a Sim wasn’t exactly friends with another, but did have have romantic interests. They were like enemies with benefits.