Finally, somebody who really listens

Set up in the Indie MEGABOOTH is one of the few zen locations at PAX East: There Came an Echo‘s sound dampening booth. In it, Iridium Studios head Jason Wishnov is showing off the tech behind the voice-controlled realtime strategy game.

To pre-empt those who would immediately go to the comments to lament voice control, There Came an Echo does feature more traditional control schemes, but it is hard to imagine players preferring it. The game has been designed from the ground up to work with voice control, and it works impressively well. 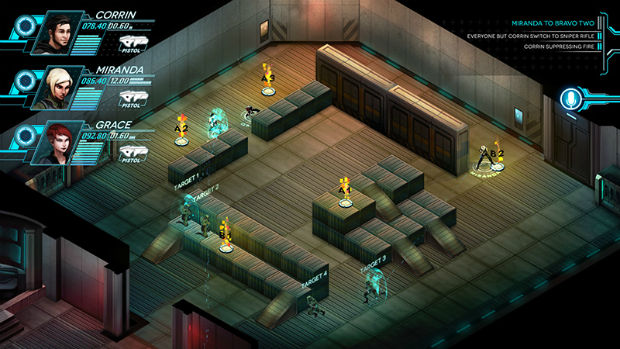 Like Tom Clancy’s EndWar before it, There Came an Echo‘s maps all have a collection of nodes designated by a letter and number to facilitate squad movement. Additionally, each friendly unit has a name and each enemy unit has a numerical designation. So, for instance, the player could issue the command, “Miranda, move to Alpha Two and focus fire on Target Three.”

If the player opts for full game pad control, he goes through a very similar process, except he does so through a set of nested menus, rather than by directly selecting units and issuing orders through button presses. So the same order as above would look like: select Miranda > Movement > Move To > Alpha > 2, then Combat > Focus Fire > 3.

At a base level, it functions, but it takes much longer to execute than the corresponding voice command. Still, the greatest efficiency comes with a hybrid of the two, with a controller to direct and zoom the camera, and a microphone to take care of the rest.

Most impressive is the technology behind the voice control. Although There Came an Echo has several built-in commands, custom words can be used for characters or orders, and the system only requires typed words in order to parse them; no pre-recording is needed. Inside the sound booth, I unimaginatively nicknamed the main character Corrin as “Wil Wheaton,” and after only typing it in, the voice recognition picked up the command without any trouble.

With just a little bit of typing, the example command above could be converted to something like, “Eagle Leader, proceed to Alpha Two and light up Bozo Three.” 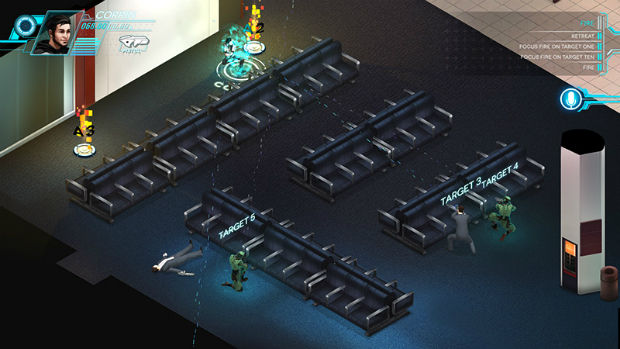 Outside the sound booth, demo stations were set up showing off a snippet of the story. It drops the player into a scenario that appears to be a short way into the narrative, where Corrin is being tracked by a group of armed men through an airport. At the end of the line, he meets with a potential double agent and has to decide whether he can trust her or not.

The sequence brings up more questions than it answers about the story, and it sets the tone for a narrative involving subterfuge and betrayal. With that punctuating the small scale tactical battles, and its impressive voice recognition technology, There Came an Echo is looking good for cyberpunk strategy fans.