I remember the first time I saw a fatality in Mortal Kombat. I was watching some other kid play at an arcade in Monroe, WA and he successfully pulled off Sub-Zero’s spine rip. It was shocking to see as a seven-year-old in 1992, and just as Joe Lieberman and Herb Kohl feared, I spent the next 10 years of my life freezing people and then ripping their spines out with my bare hands. At this point, I’d like to extend my condolences to Mrs. Brazen’s sixth grade class of which there were no survivors of my rampage.

From that first game, released 25 years ago today, the fatalities got better and better and then worse for a good while and then significantly better again. Mortal Kombat X contains some of the nastiest deaths in gaming history, but none of them can compare to this beauty from Mortal Kombat (2011).

The beauty of it is it isn’t a quick split. It’s a break in three parts: the hips, the chest, and the shoulders; each extending the pain and agony of the kombatant and as I type this sentence I realize I’m starting to sound like a serial killer. Mortal Kombat X tried to top it with several of its character’s finishers, but I don’t think anything will be able to surpass Noob’s fatality with its simple premise and horrifying execution.

As a kid, fatalities were daunting.

Not necessarily the act of actually pressing the required button combinations for them (though a few were intricate), but the pressure that goes along with it. Often times I was the older person in the group, but facing a senior in a really tense match where my friends were cheering me on? I choked every once in a while when it came to actually following through with the finishing touch. That, and some people just plain smacked the controller out of my hand to spare the embarrassment — schoolyard rules!

So with all of that buildup,Shang Tsung’s “inside out” finisher was a perfect way to cut down on the stress, and I could get it off even if someone tried to stop me. What was so special about it? Well, you have to hold down the low punch button for thirty seconds, then release when the screen orders you to “FINISH HIM!”

I’ll never forget my first use of it — I was squaring off against someone five years older than me, I popped it right at the end, and everyone went crazy. No one had even seen it yet! Mortal Kombatcame at basically the perfect time in my life, and I’m glad most of the parents I knew didn’t think it would turn me into a devil child.

When I was younger, I never quite got the hang of doing fatalities in Mortal Kombat. I either didn’t understand the strict timing and spacing they required or I was just too impatient to bother with them. It wasn’t until Mortal Kombat 4 had the easy fatality cheat that I really got into them.

That being said, as I got older and better understood fighting games, I eventually learned about all the ridiculous methods of death that Mortal Kombat had. There are a lot of classics, like Liu Kang dropping an arcade machine on his opponent to Scorpion ripping his face off to burn someone, but the classic titles kind of lacked something. When Mortal Kombat (2011) came out, I feel like that was when we started to see the true definition of fatality.

For my money, the stage fatality on “The Street” level perfectly encapsulates the glory of Mortal Kombat’s over the top violence. Not only is it ridiculously violent, but it also takes on an element of comedy with the body twitching after death. It is just insane and I spent about a good hour or so just throwing people into traffic to see the result. 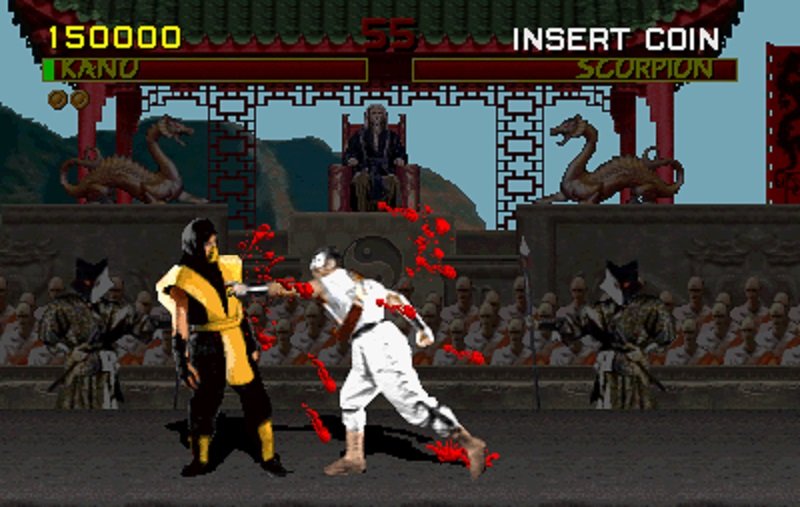 I have a long history with the MK series, ever since the release of MK1. There was one at my local arcade, and I was one of the first folk there to know the fatality inputs, thanks to an import copy of GamePro magazine. This gave me a bit of a “name” among the local MK players. One day I was challenged by this guy, several years older — I was 11 and he was around 19 — which when you’re a kid might as well be 30. The guy drops in his 20p and a few of the local players gathered for the showdown: A Kano vs Kano mirror, back before Counter-Picking was a thing.

Long story short, we have a really close, intense fight. In the third round, I cross him up and end up on the left-side of the screen, to which he shouts something ridiculous like “I CAN’T FUCKING PLAY ON THE RIGHT! GET ON THE RIGHT!” I hit a cannonball to put Kano #1 flat on his back. “FINISH HIM!” blares Shang Tsung. I stride over and hit the input for Kano’s infamous Heart Rip.

Kano plunged his hand into his doppelganger’s chest and… the next thing I know I’m literally bouncing off of Vendetta, smacking my head on the marquee. Then my good-sport opponent pie-faces me to the floor and proceeds to kick me hard in the ribs, I forget how many times… twice? (cushioned by my stupid-looking oversized jacket, as was the style of 1992.)

Having shown off his dick size by beating up a child in public, he strode back to the MK cabinet, unplugged it, and left, where all the other players jumped him and kicked the shit out of him. Well, actually, they just kind of looked at their shoes and wandered back to Wrestle War. A good friend at the time walked over to me and said, with total sincerity “You really shouldn’t have beat him, that was stupid.”

That’s why Kano’s Heart Rip from MK1 may not be my favourite series fatality, but it’ll always stick with me. Let this be a history lesson, folks: Ragequitters have always had a place in fighting games. Indeed, salt flows forever.

I remember the first time I saw Mortal Kombat in the arcade. I was blown away. There was blood and gore and it felt so adult. Now I was a kid or enough of one to where the realm of violence was still a wondrous mystery to me. Then I saw Sub-Zero’s fatality. The one where he pulls their head off with the spine attached. I was enthralled. I played the game over the years but never excelled and eventually found myself having a passive interest in the series. So whenever a new game is announced, all I care about are the fatalities.

I always wished I could be a fly on the wall when new fatalities are designed. A great fatality isn’t about the gore. That’s a by-product of the process. As the series went on and the tech behind the games improved, there was an expected escalation to everything. So now we get to a point where we want to see the anatomy. Lungs and brains and windpipes. The devil here is in the details. So when a fatality does something new and interesting, I have to applaud it. And while that Sub-Zero head rip fatality was the catalyst for me, I think my favorite is Here’s Johnny.

It’s clever and silly and instantly recognizable as a reference to The Shining. In a game rife with mediocre kills, moments like this stand out as a wow moment that ties in popular culture and Mortal Kombat’s embrace of campiness. The first time I saw the fatality, I chuckled and remembered why NetherRealm and Co. are still the best at the art of fatalities.

Mortal Kombatwas never my jam. It’s always taken a different approach to combos and frame data, so it’s never quite gelled with me. To me, playing Mortal Kombatwas about the aesthetic and the cheesiness of it all. Ninjas, American special forces, cyborgs, and even a pompous movie star! Where Street Fighter was about racial profiling, Mortal Kombat was just C-list children’s morning cartoon characters.

In a game where a whole man can be inhaled into a fanged woman or a skull can be pulled out, spine and all, how do you top that? Lui Kang’s fatality just drops a whole Mortal Kombat arcade cabinet on you in a fairly realistic death. I mean, you would die if an arcade cabinet was just dropped on you. But why is it MK? Does MK exist within MK? Or is this cabinet just dropping out of their dimension much like the rest of MK‘s dimension-hopping shenanigans?The world may never know.

I stumbled on my first video game guide at a thrift store (with the cover torn off, natch), and it was for Ultimate Mortal Kombat 3. Before I had ever played it, I read through this guide over and over learning the fatalities. My only other experience with Mortal Kombat before then was the first game on the Game Gear, so when I finally got my hands on the SNES version of UMK3 it pretty much changed everything. The most intriguing? Smoke’s blowing up the f**king world fatality.

What other fatality killed literally everyone?

So brutal, so wonderful. What’s your favorite fatality? If you need help deciding, here they all are one right after the other, for nearly three glorious hours.