It’s high time I bought myself a proper gaming PC. Since high school, I’ve been a dedicated Mac user. Growing up, my goal was to be a filmmaker and for aspiring writer/directors, there was nothing more appealing than iMovie. That was to be my gateway to Hollywood fame and fortune. It was the program of choice in my filmmaking class and I used it to create my very first short film. Don’t ask me what it’s called because I don’t remember. Something about me being a serial killer who cleans up after a kill. I don’t know, it was rubbish, I shot it in black and white, completed it at the last minute after weeks of completely rewriting my script and I pray to whichever deity actually runs things down here that all remaining traces of that short are gone.

But that dream was the catalyst that pushed me towards being a Mac user and I’ve been one ever since. Through thick but mostly thin, I’ve stood by this incredibly boring, trillion-dollar company while pining for the experiences found on a Windows PC. Sure, after the transition to Intel I can now run many more games on my MacBook than I could before when all the big hits arrived two years after the initial release and Aspyr never dropped the fucking price on their games, but there is still so much I’ve missed out on. I wrote about this previously in my Pathfinder: Kingmakerpreview, but as I learned last Friday, it’s not just CRPGs that have passed me by. I’ve missed legitimately unique experiences that most likely can’t be recreated on a console, like the one found inTotal War: Three Kingdoms.

Announced at the beginning of this year, Three Kingdoms is Creative Assembly’s firstTotal Wargame set in China using the oft-adapted historical fiction Romance of the Three Kingdoms as the basis for its campaign. For fans, it’s something they’ve been wanting for quite awhile. For the developers, it’s a much-needed break from the periods and places that have been the focus of the series’ past.

During a recent hands-on session with an early mission in the game, I sat down with Pawel Wojs and Al Bickham of Creative Assembly to talk about the game and the changes longtime Total Warfans can expect. The biggest change is in the available modes. Three Kingdomswill launch with different versions of the campaign, one based off Romance of the Three Kingdoms, the other Records of the Three Kingdoms. Records mode hues more closely to the experience Total Warplayers are accustomed to, with characters in the story equivalent to traditional generals.

Romance mode, however, is where the game really mixes it up. Here, characters appear as heroes, and just like in a certain long-running Koei Tecmo franchise, they have special abilities normal soldiers do not possess. In my demo, I took control of an army led by Sun Ren, a Vanguard class hero, and Sun Quan, who is of the Commander class. In battle, as I led the heroes against enemy armies, I was able to use their talents to burst through enemy defenses, weaken their camps, and do damage to opposing heroes before engaging them in a duel. 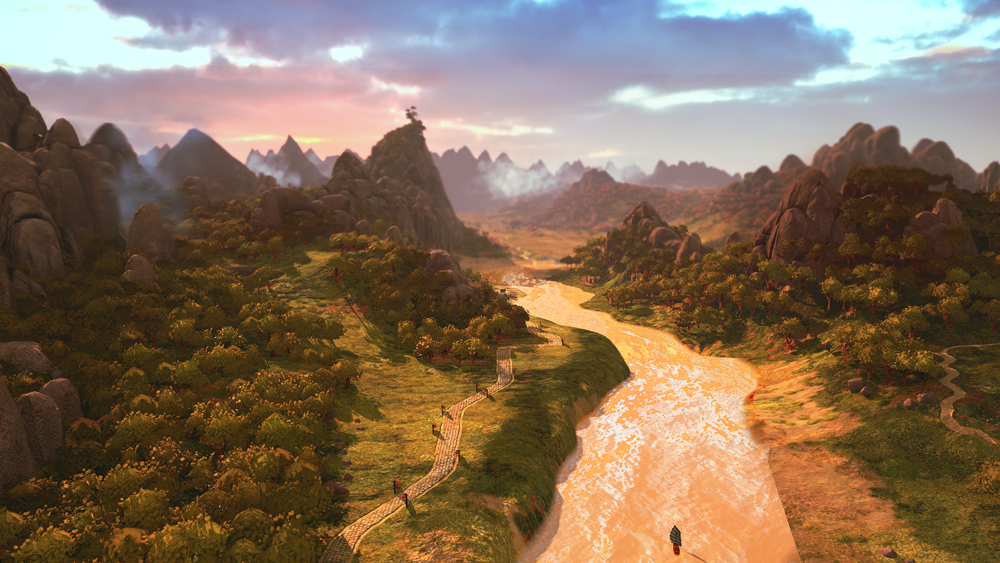 “It’s a level of strategy game that hasn’t been made before: the Total Warformula with that great, classic narrative,” Wojs explained. “Creating these characters has been a great and very new challenge for us, but there is all this great source material [with] fantastic descriptions of all the characters in the Romancenovel as well as references to them in the Records. Plus all the movies and television series in China that detail these characters very well. All of these points of reference allowed us to create the characters as they are.”

These heroes appear larger than life on the game’s map. In Creative Assembly’s dedication to authenticity, the map of ancient China reflects the layout of the land, geopolitical boundaries and all, as it was during this era. This level of historical accuracy is thanks to many hours of research, as well as Rafe de Crespigny, who provided assistance on the project.

“He’s the foremost expert on this period in the West,” Wojs said. “We have all of his books and we literally have him on speed dial with any questions about the period. Whether it’s was the lay of the land, the cities, the geopolitical landscape, he helped us build the structure of the game.” 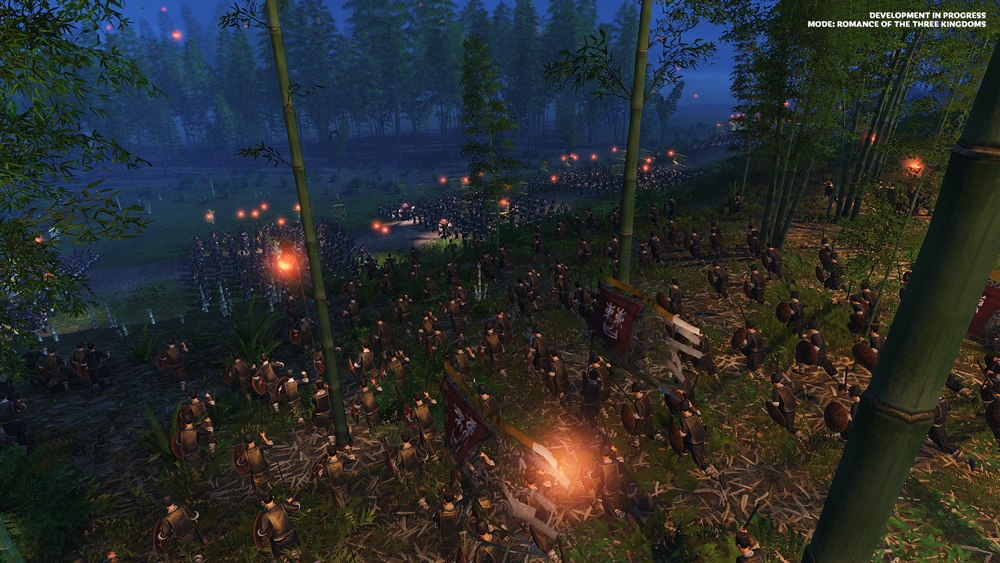 During a short presentation before my hands-on with the title, Mr. Bickham went over a few of thefeatures found in the title. There is a day and night cycle, with floating lanterns illuminating the dark blue skies of night. Players will have to account for changes in terrain, as well as combustible materials — it’s quite lovely watching a forest ignite in a blaze and I write this as a Californian whose state is currently 99% on fire. There is also a fight-or-flight mechanic that’ll give players the opportunity to flee if the battle seems unwinnable. The feature that’s most exciting the development team, however, is the new spy system.

In order to describe it, there are few things you should know about the heroes. First, these characters havepersonalitytraits that are unfamiliar to players early on. It’s only when you travel with and battle alongside them that you begin to understand them. These personalities can clash with other heroes in your faction, making for some difficult decisions. Second, heroes have personal relationships with one another. They can become friends or rivals depending on how they’re used in and out of battle. If two characters have similar dispositions, they can become the best of friends. Third, heroes can move between factions. It’s entirely possible to fire a character, releasing them to this pool of unrecruited heroes who can be picked up by other factions. Basically a Total Warfree agency.

It’s important to know all three of those facets of the game as they all play into this new spy system. 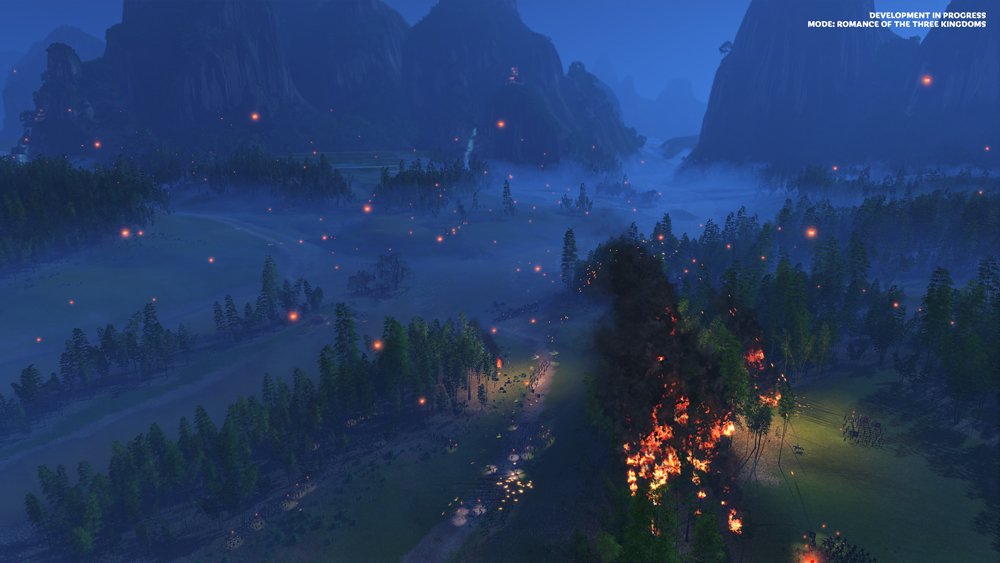 “Some characters will have a predisposition to being spies,” Bickham explained. “Not all characters. If you have a very honorable character he wouldn’t be, but there are those in the game with a willingness to engage in subterfuge. So if you have a character, like a character who you’ve worked up through the ranks, you’ll be able to ask them if they’re willing to go spy for you. If they do, it’ll look like the character has been fired in the eyes of the other factions. He’ll just be a recruitable character in the pool like those you’ve previously let go. If somebody else recruits him, immediately you’ll get vision over their holdings. The spy is there and he’s embedded, providing you information on what’s going on.”

“The longer he remains, he builds up his cover. The longer he’s there, the more powerful actions you can unlock. The more advanced the espionage is, the more likely it’ll be he blows his cover. If your spy stays undercover for so long they actually become well-liked within their faction, he can be employed as the heir to it. Suddenly, your guy is the next in line to the throne to this faction. And if something were to happen to the faction leader, your spy can become their new leader, at which point you’ll trigger a civil war and try to flip that faction over to your side. Of course, there’s going to be a lot of polarization but you can split it in half and go to war with the other.”

Unfortunately, my brief outing with the title did not allow me to try out the spy system, but it did give me an idea of just how a Total Wargame plays. My only experience with the franchise is with Spartan: Total Warrior. Yes, I did ask the developers to port the game to Switch and, no promises, but they seemed strangely receptive to the idea. Anyway, that’s the lump sum of my time with the series but I do have a history of playing real-time strategy games like Command & Conquer: Red Alertand those awesome Star Wars Battlegrounds titles that are basically just C&C clones.

If anything — you’ll probably hate me for this comparison — it comes across to me more like a real-time Fire Emblem. There’s a weapons triangle to worry about, squad placement is extremely pivotal, and the ebb and flow of each battle carries a similar rhythm to that found in many of the FEmissions. As stated above, in my demo, I took control of the Sun siblings as they made their way along a trail through the night before being ambushed by opposing factions. To give you a taste of how Total War: Three Kingdoms is in action, here is actual footage of me playing the mainline franchise for the very first time.

Okay, I lied. That’s the second time I played. The first was right before this when I was overwhelmed by the unexpected rear flank and failed to reach the exit point. But really, not bad for someone with approximately 20 minutes total of series playtime.

Total War: Three Kingdomsis scheduled for release next Spring, hopefully right around the time I receive my tax refund check so I can finally build or buy myself a proper gaming PC to play it on. If you’d like to show everyone how much better of a Total War player you are than I, the demo above will be on the floor at Gamescom next week.