Hello everyone! Valentine’s Day is today, and in the spirit of the holiday, I thought it might be fun to take a look at some of my favorite unrequited video game romances! These are instances where the game heavily hints at one character’s attraction to the other, but neither character ever admits their feelings for one another. Their futures are left up to interpretation by the player, but I always hoped that these characters would end up together, even though it may have seemed very unlikely.

Also, if you think of any of your own examples, share your thoughts in the comments! Happy Valentine’s Day! 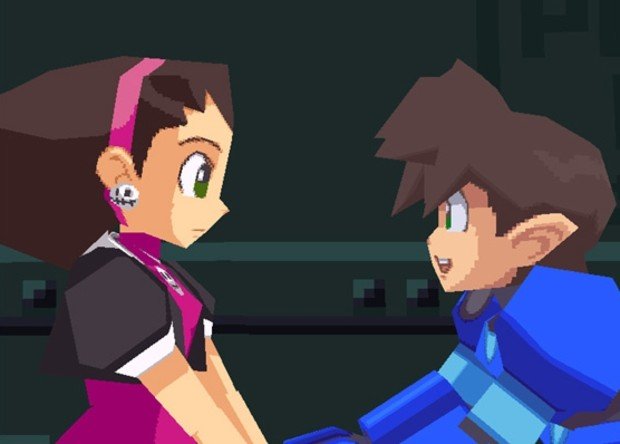 It’s not every day that the villain falls in love with the hero, but that’s precisely what happens in Mega Man Legends. While scoping out the island that she planned on attacking in the hopes of stealing treasure, Tron Bonne happened across Mega Man, who had just crash landed on the island and was trying to find a way to repair his ship. During their very first encounter, she brushes him off rather hastily, but things change when Mega Man rescues her from an aggressive dog. Tron is clearly not used to other people treating her with kindness. She blushes and walks towards Mega Man, but then changes her mind and runs away, warning him to mind his own business!

Eventually, the two find themselves fighting against each other, as Mega Man tries to protect the island from the pirate attack led by Tron. She seems surprised to see him again, but also somewhat happy, remarking, “I don’t understand… whenever I think about him, I get this funny feeling…” 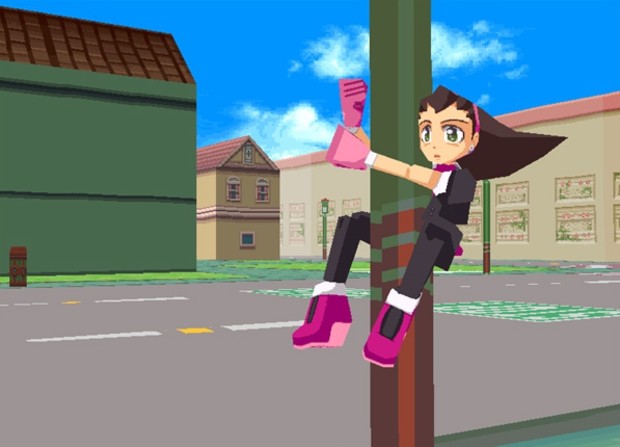 Tron and Mega Man begin to develop a competitive relationship, and they always seem excited to see each other again, even though they know that they’re going to be fighting. Even when Tron loses to Mega Man, she never feels upset, even though she makes sure to let Mega Man know that she’s angry at him for destroying her robots!

In Mega Man Legends 2, Tron tries more directly to get Mega Man to notice her. She attempts to impersonate Roll Caskett, Mega Man’s actual romantic interest, and makes it seem like Roll is saying nasty things to make Mega Man lose trust in her. It doesn’t work, and Mega Man finds out that Tron was just fooling him. There’s also a humorous part in the game where Mega Man accidentally sees Tron in the buff, as her clothes are apparently singed off of her when her robot is destroyed. Unintentional as it may have been, it still doesn’t win over Mega Man’s affections.

Nevertheless, Tron continues to follow Mega Man. At the end of the game, Tron is seen working alongside Roll, helping to build plans to rescue Mega Man from the moon. Unfortunately, the relationship between Tron and Mega Man will have to be left to the imagination of the fans, as Capcom refused to release the third title in the series. Even though it’s pretty obvious that it never would have worked out between them, I still kinda wish they’d get together, if only because Tron is one of the coolest characters ever and I really want to see her happy! 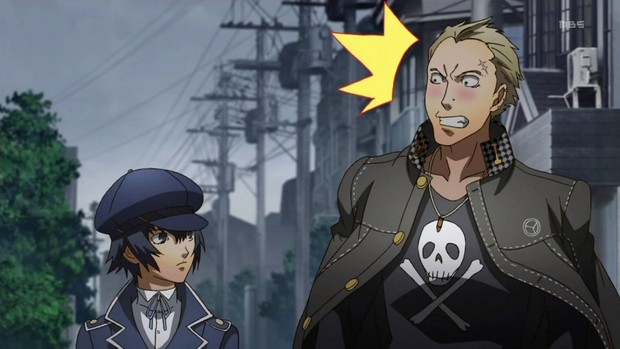 The relationship between Kanji and Naoto is a strange one, to say the least. When Naoto is first introduced, everyone in the game assumes that she is male, judging by her outfit and mannerisms. She is even introduced as male to the player, since the game only uses masculine pronouns when referencing her.

Then we have Kanji, who is struggling with his sexual identity after being bullied by his peers for his interest in “feminine” hobbies, such as sewing. It seems like it was mostly girls that bullied him, so he’s understandably wary of the female sex for the time being.

Then he meets Naoto, who, being a detective, is interested in having a discussion with him in private, since Naoto suspects that Kanji might be the murderer’s next target. Kanji completely misinterprets Naoto’s intentions, and assumes that she’s asking him out. He also assumes that she’s a boy. Needless to say, a particularly awkward conversation occurs between the two, and it becomes apparent that they’re interpreting each other’s words completely differently. Kanji seems to be excited about the prospect of dating a boy, but also kind of confused, since he’s still not quite sure about his own sexuality. 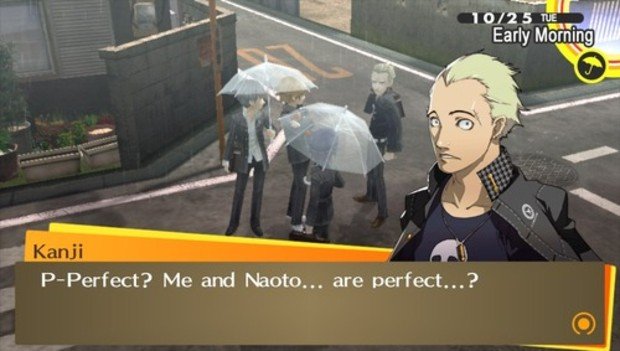 Later in the game, it’s revealed that Naoto is, in fact, a girl. Everyone is shocked! Especially Kanji, I’m sure. However, in another surprising twist, Kanji still seems to be very much attracted to Naoto, even though she’s actually a girl. He still blushes and clams up when speaking to her, and gets excited at the prospect of seeing her dress up for a beauty pageant. Naoto seems to be aware of Kanji’s feelings, but ignores them. Maybe she’s playing hard-to-get? Or, more likely, she’s not really interested?

Naoto does have room for a relationship in her life, though. Since you can have the game’s protagonist date most of the female characters in the game, you can choose to be a dick and date Naoto behind Kanji’s back. That scenario always made me really uncomfortable though; I never chose to date Naoto either time I played the game. I think the protagonist and Chie make a cuter couple anyway, and that way you’re not stabbing your friend in the back. I always hoped Kanji and Naoto could get together, because Kanji would be so happy! But alas, Naoto doesn’t seem to share the same feelings…

Monkey and Trip – Enslaved: Odyssey to the West 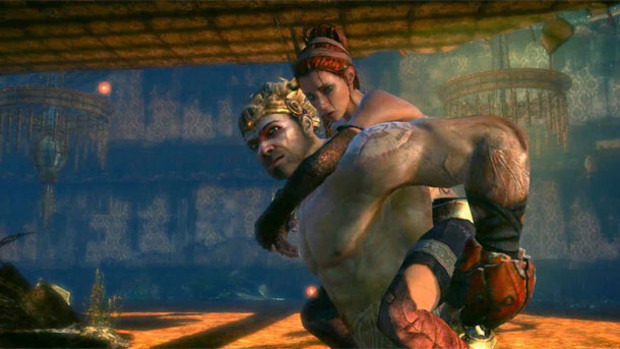 Of the four relationships in this blog, this one seems the most likely to actually come to fruition. At the beginning of Enslaved, the relationship between Monkey and Trip is extremely hostile. This makes sense, as Trip has effectively enslaved Monkey with a headband that makes it possible to control him, so that he’ll escort her back home. It’s not a very nice thing to do to a person.

As the game progresses, the two become increasingly dependent on each other, and they begin to come to a bit of an understanding. They also begin to develop some sexual tension. At one point in the game, another character, Pigsy, tries to make a pass at Trip, only to be shot down. He then speculates that Trip is more interested in Monkey, and as they sail away on a ship, the junkyard in the background happens to form a heart shape around the two supposed “lovebirds.” 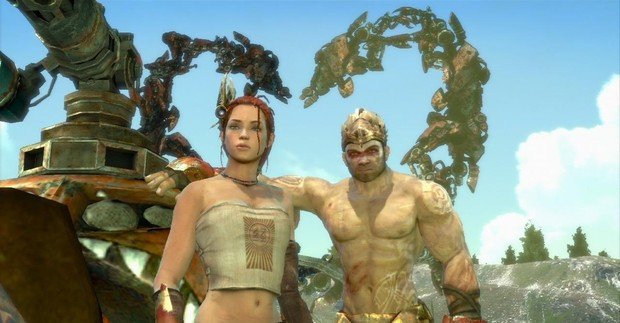 Monkey and Trip never profess their feelings for each other outright, but it’s pretty obvious how they really feel. When Trip finally disables the headband enslaving Monkey, giving him the opportunity to leave, Monkey instead insists on leaving it on. His reason for doing so is up to interpretation, but I believe he was afraid that, given the option, he might actually choose to leave Trip, even though deep down inside he really wanted to continue accompanying her.

It’s possible that, once their adventure was over, they stayed together and formed a deeper, loving relationship. However, the game never explicitly states what happens afterwards, so it’s open to player interpretation. I like the think they did get together, because I think they’d make a really great couple.

The first time I played Earthbound, I didn’t really notice that Tony might think of Jeff as more than just a friend. It’s not immediately apparent in the game that Tony might be gay, but it is theorized, since the game’s creator, Shigesato Itoi, claimed in an interview that one of the characters in Earthbound is homosexual. Playing the game again with that knowledge in mind, you can start to pick up on the subtle hints.

When you first talk to him in your dorm room at Snow Wood Boarding School, Tony admits that he was having a dream about taking a walk with Jeff. It’s a bit of a strange remark from a friend. Tony then helps Jeff escape from Snow Wood, and seems genuinely sad to see him go, but also understanding. Meanwhile, Jeff says absolutely nothing in response to Tony. You could brush this off as Jeff being a silent protagonist, except he does speak to Ness and the other party members occasionally. Just not to Tony.

Later in the game, you come across Tony again, having been kidnapped by aliens and being held in some sort of tank in an underground base, along with a handful of other characters. He is especially excited to see Jeff again, and claims to be Jeff’s best friend while talking to Ness and the others.

Towards the end of the game, you can find a letter from Tony addressed to Jeff, which reads:

Dear Jeff, Everything’s really going great here. I wish I could have gone with you on your adventure, even just part of the way, but instead I’m sitting here,waiting for you in Winters. I want to see you again as soon as possible. I can’t wait to see your cheerful face. I bet your glasses are dirty…If you come back, I’ll clean them for you! Like I said, I’m waiting for you. Yours truly, Tony P.S. Don’t show this letter to anyone!

There definitely seems to be a little more than friendly feelings being expressed in that letter. You can also speak to Tony at the end of the game, and he complains to Ness that Jeff never calls him, possibly because he’s too annoying.

Unfortunately for Tony, Jeff doesn’t seem to be interested. It’s also possible that Jeff is completely oblivious to Tony’s feelings, and only thinks of him as a friend. I still wish they could have gotten together though… they would have been so adorable! Of course, chances are that Tony was barking up the wrong tree anyway, but you never know!