To Hell and back

I don’t know about you, but I really like Ubisoft’s recent output of games utilizing the UbiArts Framework engine. I’m quite a fan of games that use 2D visuals to tell a story, and even with the recent release of Child of Light, the publisher has got another UbiArts title in the pipeline. Revealed last year along with the 2D RPG, Valiant Hearts: The Great War plans to try something a bit different with the engine by setting an adventure game in one of the most brutal conflicts in modern history.

After getting the chance to play the title at a recent Ubisoft preview event, I came away quite intrigued with what it has to offer. With its release next month, the developers at Ubisoft Montpellier plan to take a different approach to a war game, by bringing the focus on people looking for glory, love, and the will to survive. 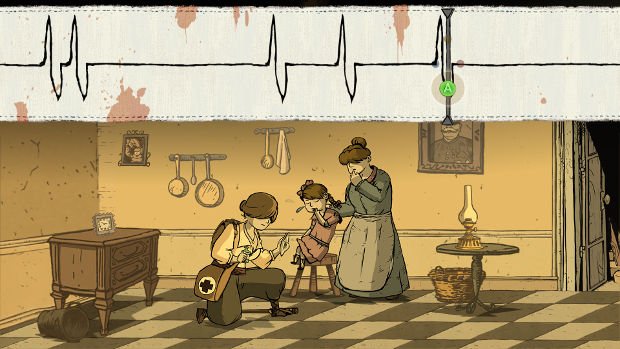 Set during the first World War, known as The Great War back then, Valiant Hearts tells the story of a set unique characters who cross paths and must traverse Europe in search of family, friends, and the means for revenge. Emile and Karl are from the same family, but drafted onto opposing sides, Freddie is an American soldier enlisted in the French military, and Anna is medic living in Paris. Each of the playable characters will encounter one another and they must work together to stay alive across war-torn Europe.

Described as a passion project by the developers at Ubisoft Montpellier, they wanted to a make a game that drew upon the impact of the Great War, without designing it as a standard shooter or action title. Working with the smallest team on a modern Ubisoft title, many of whom had family serve in the war, they wanted to make a game that had a very personal story about a group of unlikely heroes. The events of Valiant Hearts are loosely based on real conflicts during the war, and many of the details and specifics are pulled from actual letters and documented occurrences. 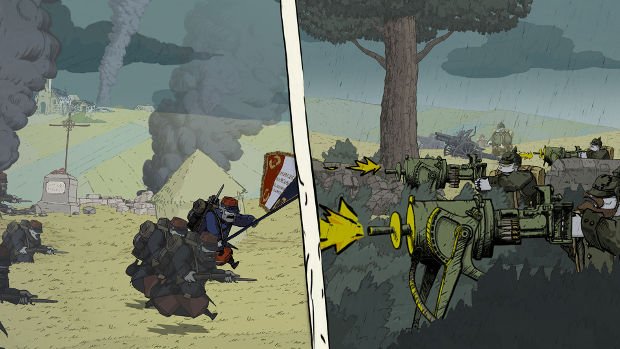 “The team read a lot of letters that date back to WW1 and noticed that many of the men called to the front were simply everyday “men in the street,” in the words of lead designer Julien Chevallier. “Several letters are used as a basis for the narration of the cutscenes. For example, Emile writes letters to his daughter at various points throughout the story in order to give her news about himself and her husband Karl, a German soldier. “

Since this is set during an actual conflict, and not fictional one, many of the details and phrases used in the game may be lost on some. At any time during play, you can access a Facts menu to learn more information about the war, terminology, people, and events.

Think of it as a handy and abridged wiki page on relevant details from the past, which pulls information from the official Mission Centenaire 14-18 history compendium and Apocalypse: World War I documentary. This will likely help those who aren’t history buffs, or otherwise didn’t pay attention in school during history class, but it also reveals some not so well known facts about the war. 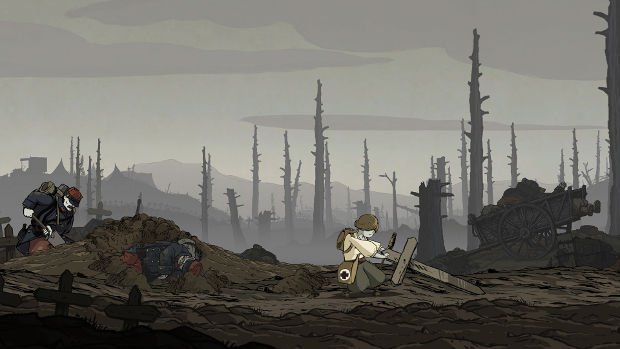 I felt like I was learning details about the war with every passing moment. For instance, the character Freddie is an American who was inspired by the war overseas and enlisted in the French military. At first I thought this was something that the writers took liberties with, but then looking into the facts page showed detailed information, along with color pictures of how many American enlisted into French military prior to the U.S’s entrance into the War. The character Freddie in particular was based on real-life African-American soldier Freddie Stowers. It’s not often you learn actual history from war games, even the more popular ones.

Though this is a game set during a major war, it is by no means a title focused on quick action and shooting. It’s an adventure title through and through, and the developers wanted to set a game within the war and provide a more unique and personal story.

“The game tells the story of each character’s journey during a time of war, and it is not up to the player to shoot or kill other people,” said Chevallier, “but to show how it has impacted their lives in different ways. It was really important for the team to keep that humanity in the game.” 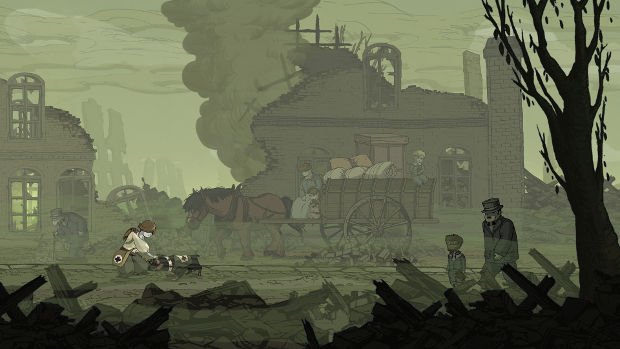 As an adventure title, players will explore, traverse, and interact with other characters throughout the game space. You’ll be constantly on your toes as you evade gunfire, mustard gas, and the hellish machinery invented during The Great War.

I really appreciated the fact that throughout many sections of the game, you’re constantly moving forward. Mostly because you’re under fire and have to evade the enemy, of course, but I found it to be an interesting change of pace for an adventure title. To give players extra incentive to replay chapters, the developers asked members of the Ubisoft community to share details and photos of family heirlooms related to World War I. The developers handpicked the most interesting ones and placed the items as collectibles throughout the game.

Diversity is a big element to the story and gameplay, and it’s clear to see how things change when you play other characters. While for the most part you’ll be performing similar puzzle solving and action beats throughout the game — how these characters actually go about it is a bit different. For instance, Freddie’s gameplay sections feel more action-oriented, as he’s often on the front lines breaking through enemy barricades and bases, Emile focuses more on puzzle solving and using his dog to examine points of interest, and Anna’s medic gameplay has her exploring the environment for supplies and performing a rhythm-based operation mini-game to save the lives of the wounded.

“From the beginning, the team wanted to provide an added-value to the player experience with a clever shifting of the pace and a variety of gameplay,” said Chevallier. “In order to meet the objective of creating a game with a wide range of emotions, it was important for the team to integrate different kinds of gameplay simultaneously. For example, action-oriented sequences elicit feelings of fear, suspense or tension.” 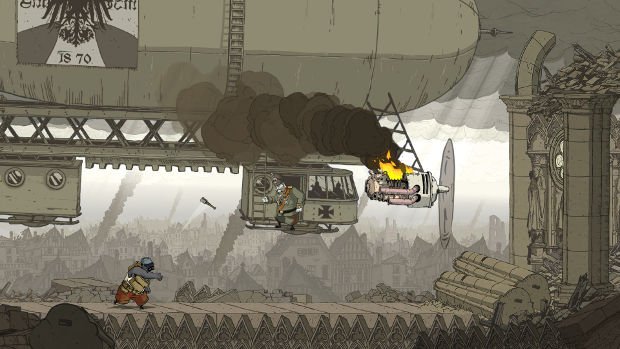 I rather enjoyed how clever the gameplay and puzzles were. One moment, I was running across a battlefield evading enemy fire and using grenades to bust open a machine gun nest, and then I moved to a different scene with a character as a P.O.W, where I had to prepare food for the enemy camp.

In most other games of this genre, you’re centered in a particular location where you explore and solve puzzles at your own pace. While those situations are still present, there are many different spots where you have to move quickly and think fast while avoiding danger. Oddly enough, it makes it feels much more like an action-puzzle adventure title. Which is neat.

One aspect of Valiant Hearts that was I was very impressed with was the visual style. As you already know, this title runs on the UbiArt Framework engine, which was used by the recent Rayman titles, and the just released Child of Light. Visually, Valiant Hearts evokes the style reminiscent of French comic books and animated shorts from the 1960s. The art style is both detailed and crisp, as it helps to illustrate the grittiness and grim nature of war, while at the same time showing emotion and complexity in the character’s personality and design. The juxtaposition between bleak and vibrant is stark, and very effective in helping to the story.

With that said, I did find that the art style and layout design made it a little difficult in some cases to find clues and other objectives. There were points where clues and items I had to locate would blend into the background, and it was unclear if I could interact with it or not. I often times found myself wandering around trying to find the solution, and I had to get help at some points to figure out what to do. Here’s hoping they can make objectives a little more obvious by the time of release. 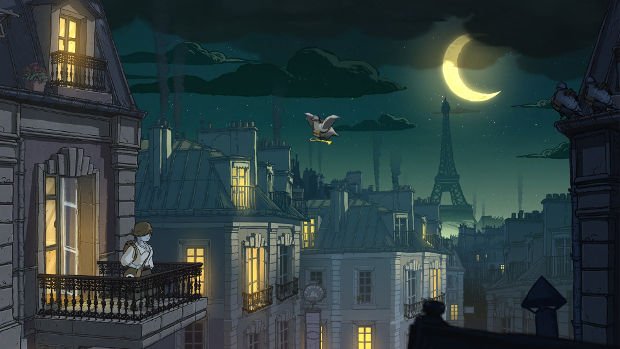 I’d like to think that it says a lot about a game when they’re willing to tackle a more personal story set during a time of war. And to be frank, I find that level of humanity is missing from other games that are set in war. In one sequence, I was controlling the character Emile, who was awakened by his dog after surviving a bombing raid. Even with the cartoon aesthetic, the carnage seen from traversing the ruins of the base, along with what remained of the soldiers was tough to witness. I found more honesty, and more emotion in this scene than most other games about war.

Valiant Hearts: The Great War is quite an intriguing and evocative game. I spent a lot of time thinking about how to best share my thoughts about it. It very much channels indie game sensibilities, such as streamlined gameplay and a personal and expressive story; which is surprising coming from a big publisher such as Ubisoft. While there were some rather serious bugs and quirks that still need to be ironed out, I admire a lot with this title. With its release next month, fans of the adventure genre will have another neat, and interesting title to look forward to.