Stat blocks for the things that go bump in the night

Picking up a new Dungeons & Dragons book is one of my favorite experiences. Opening it for the first time, the spine cracking a bit, the pages resistant to turning — it all makes for a bizarrely tactile feeling that I look forward to each time. The Monster Manualtype of books have always been my favorite to flip through, especially with the Fifth Edition version. Each creature comes with stat blocks to make them playable for your adventures, but it’s always the story hooks that dig deep into me, helping me to conjure half-formed inklings of worlds and scenarios I can drag my players into. Wizards of the Coasts’ newest bookVolo’s Guide to Monsters combines the granular nature of stats with even more narrative, and it’s all the better for it.

Instead of being a collection of beasties ripe for plucking and placing into a campaign, Volo’s Guideis presented as an in-universe text.Volothamp Geddarm, a traveling scholar who’s known for not always being completely accurate in his writings, has collected his observations on monsters into a book. Elminster, the Sage of Shadowdale, isn’t so sure that Volo’s gotten everything right. Because of this, there’s the D&Dequivalent of post-it notes with Elminster’s notes throughout the book disputing what Volo has to say. Unlike the Sword Coast Adventurer’s Guide, the focus is still on material to improve your game, but these story blurbs add so much character to the book and make it a more entertaining read.

Volo’s Guide is divided into three chapters: monster lore, character races, and a bestiary. The monster lore chapter is a sort of deep dive into some of the most iconic D&Dmonsters. Instead of just the few pagesbeholders have in the Monster Manual, they have thirteen. This allows for a more in-depth look at how eye-beasts reproduce, behave around minions, how they fight and live their daily lives. There are also rolling tables so you can make a beholder on the fly (traits like skin color, texture, eyestalk shape, and the like) and a sample map of one of their lairs. Seeing so much information on one subset of enemy really got my creative juices flowing, and I almost want to make a beholder campaign now. Also included in this chapter are giants, gnolls, goblinoids, hags, kobolds, mind flayers, orcs, and yaun-ti. 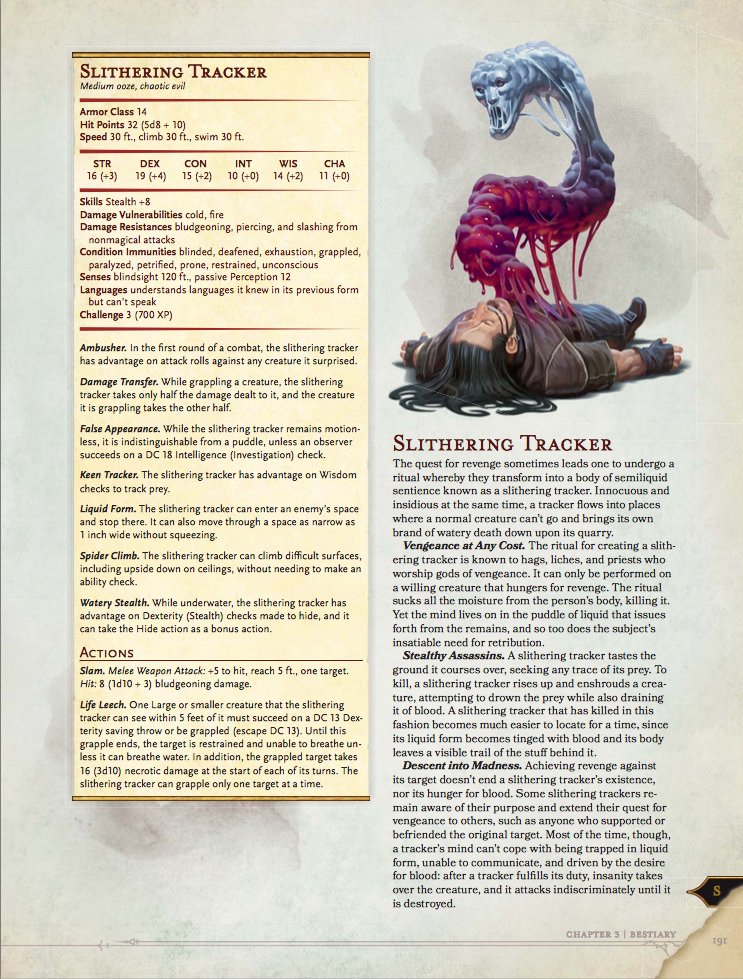 In the second chapter, there are new character race options. I was expecting only a few, but there are seven new (well five, if you’re counting downloadable supplements) races and six monster races. The angelic Aasimar are more fleshed out here than in the Dungeon Master’s Guide, and the huge, mountain-dwelling Goliaths are no longer relegated solely to the downloadable Elemental Evil Player’s Campaign. The forest-protecting Firbolgs, the wingless, birdlike Kenku, the cold-blooded Lizardfolk, the lithe feline Tabaxi, and the aquatic Triton all make for good additions to what players can choose from.

Kenku seem especially interesting to me: a long time ago, one of them tried to steal from a powerful deity. As punishment, the entire race suffered three curses. Their wings withered away permanently, the spark of creativity was taken from them on account of their scheming, and their voices were ripped from them so they could never conspire again. In gameplay terms, this means they absolutely can not speak or create new things. They can only plagiarize and mimic, but are exceptionally good at doing so. In effect, they’ve become living tape recorders that can only communicate with soundbites collected throughout life. How cool is that? I want to play as one right now.

Monster races aren’t quite as in-depth,lacking history and storytelling hooks, but still include enough information to be playable. Bugbears, goblins, hobgoblins, kobolds, orcs, and yuan-ti purebloods are all ready to be played now. An all-monster campaign could be a fun, if I ever have the time to run it.

The last chapter is a straight-up bestiary, like the Monster Manual before it. Including monsters from previous editions and some brand new ones, it seems to sort of skew toward the slithering, more horrific side of D&D. Which means I’m way into it. For instance, the Slithering Tracker is an old favorite: beings seeking revenge are sometimes transformed by hags and liches into a blobby puddle of remains. Their minds live on, and even once they’ve found their vengeance, they’re still a nasty blob and often go insane because they can’t find satiation or communicate. Grim stuff.

Volo’s Guide to Monstersis going to be a regular on my table, and I’ll be plucking out nasties and their stories to creep out my friends for a long time. I love the marriage of narrative and mechanical information. It’s easy to ignore if you just want to have new stat blocks, but it’s hard not to get sucked in and read all of it. It’s $29.99 right now and it came out yesterday.

[This review is based on a retail copy of the book provided by the publisher.]