Sound the drums of war: right after that timer ends

World of Warcraft: Battle for Azeroth gave us two beautiful new continents, an engaging high-stakes storyline, and some great instanced content. Where it falls short is with content that’s new to the expansion: most notably Island Expeditions (which were dull one week in) and now, Warfronts, which may meet the same fate.

Both need a lot of tweaking of Blizzard is going to keep them for future expansions, much less in the near future. 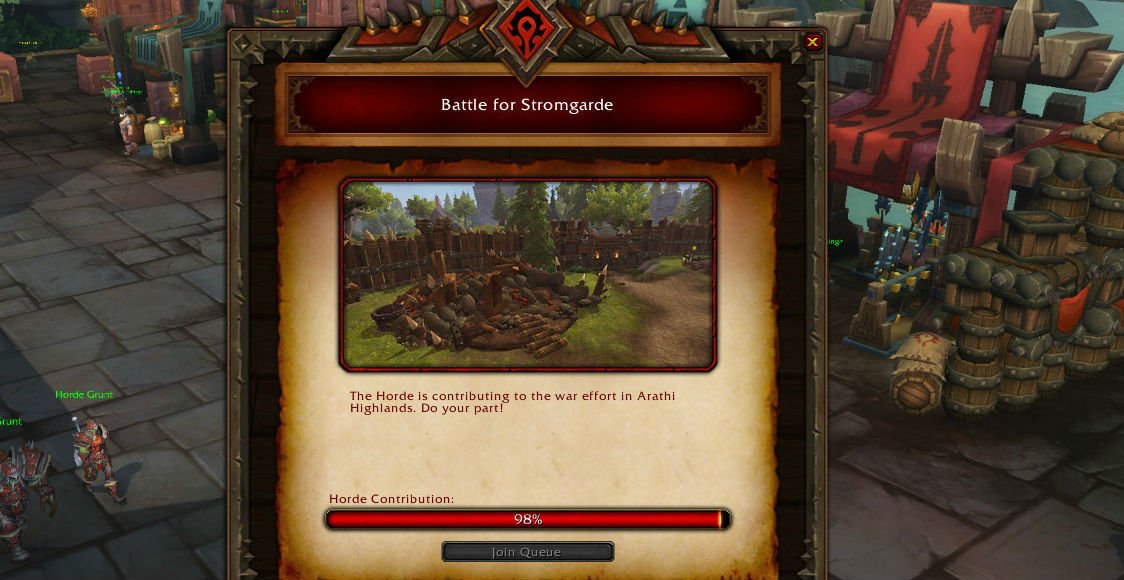 I have max level 120 characters on both the Horde and Alliance sides, so I can see the shortcomings from both angles. With the former, Warfronts “launched” this past Tuesday, except they really didn’t. Players flocked to a war table to find that instead of a queue for the mode, they were met with a time gate. Horde players had to work their way up to Warfronts with “turn-ins” (read: items to be allowed to enter Warfronts), and just today they reached the 100% mark, only to be met with a bugged queue (which was fixed roughly three hours later). For now the Horde has the chance to play the actual Warfront mode (more on that in a moment), which yields a weekly guaranteed piece of ~370 loot just in time for Mythic+ dungeons to launch. Repeat attempts net you ~340 pieces.

As Alliance, players are allowed to zone into the separate Warfront area as an open world jaunt, do some nominal quests that will take you roughly 30 minutes that grant tons of war resources (that you can use to send followers off on missions), and battle a world boss (a feature that will cycle to horde next). Here’s the thing though: not only does the Warfront world boss not guarantee loot, but Alliance players now have to wait an additional week to even contribute to the war effort and regain control of the queue. It’s a mind-boggling decision that involves nearly two weeks of gating for very little in the way of rewards. The mode itself is also nothing to write home about. Queuing for it once per quest (which isn’t once per week) for that 370 reward and isn’t a bad return, but I think that’s all people will be using it for. 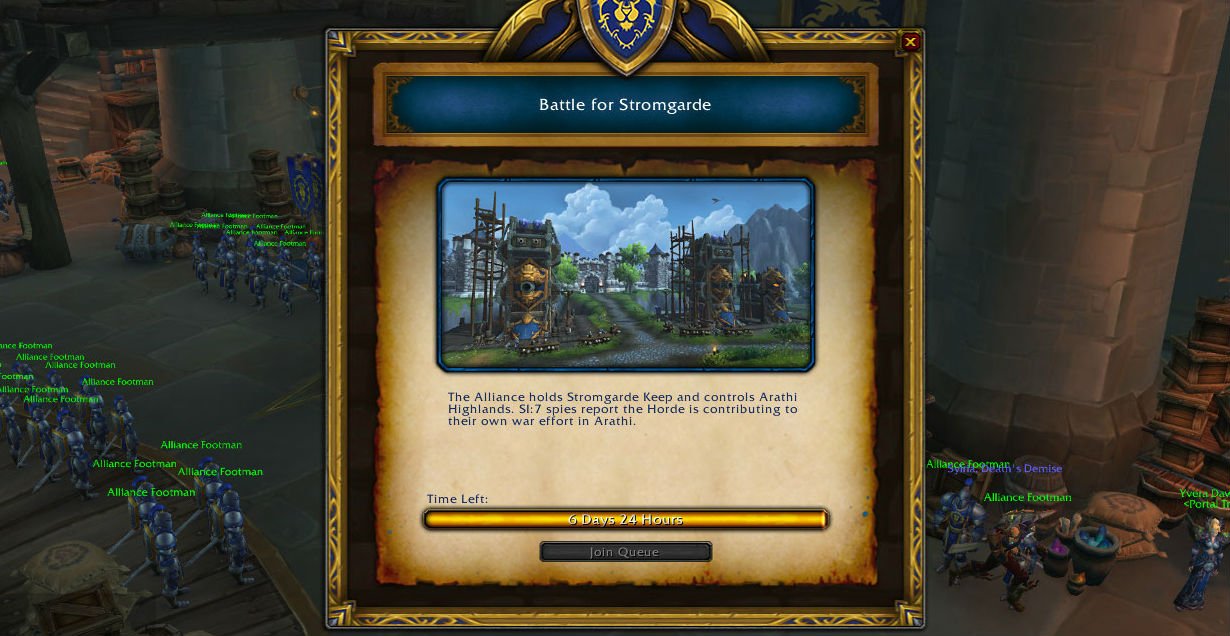 Warfronts proper are a 20-person event that essentially function as a micro-raid with objectives and resource gathering that mirrors the RTS origins ofWarcraft. Again this is not a PVP mode as you’d probably assume (given the whole orcs vs. humans angle): all your enemies are NPCs .Starting off with a pitiful base you’ll need to capture points, build structures and upgrade them, train troops and vehicles, fight minibosses and take footholds just like Warcraft 1-3. You also might need to pivot to defend points so having a good shotcaller or simply just paying attention to the map works in your favor. Warfronts in their current incarnation last around 30 minutes.

The inaugural Warfront is essentially a very cool story mission you don’t necessarily want to repeat. In a way it’s guided to the point where it’s almost on rails. The game hands you mini-quests to complete, holding your hand along the way (build this, upgrade this next) to the point where I can’t imagine a scenario in which you would fail. A heroic toggle with better rewards would fix that, and that same sentiment could be applied to Island Expeditions. It’s a fleeting fancy, not something that will be remembered fondly in the years to come. 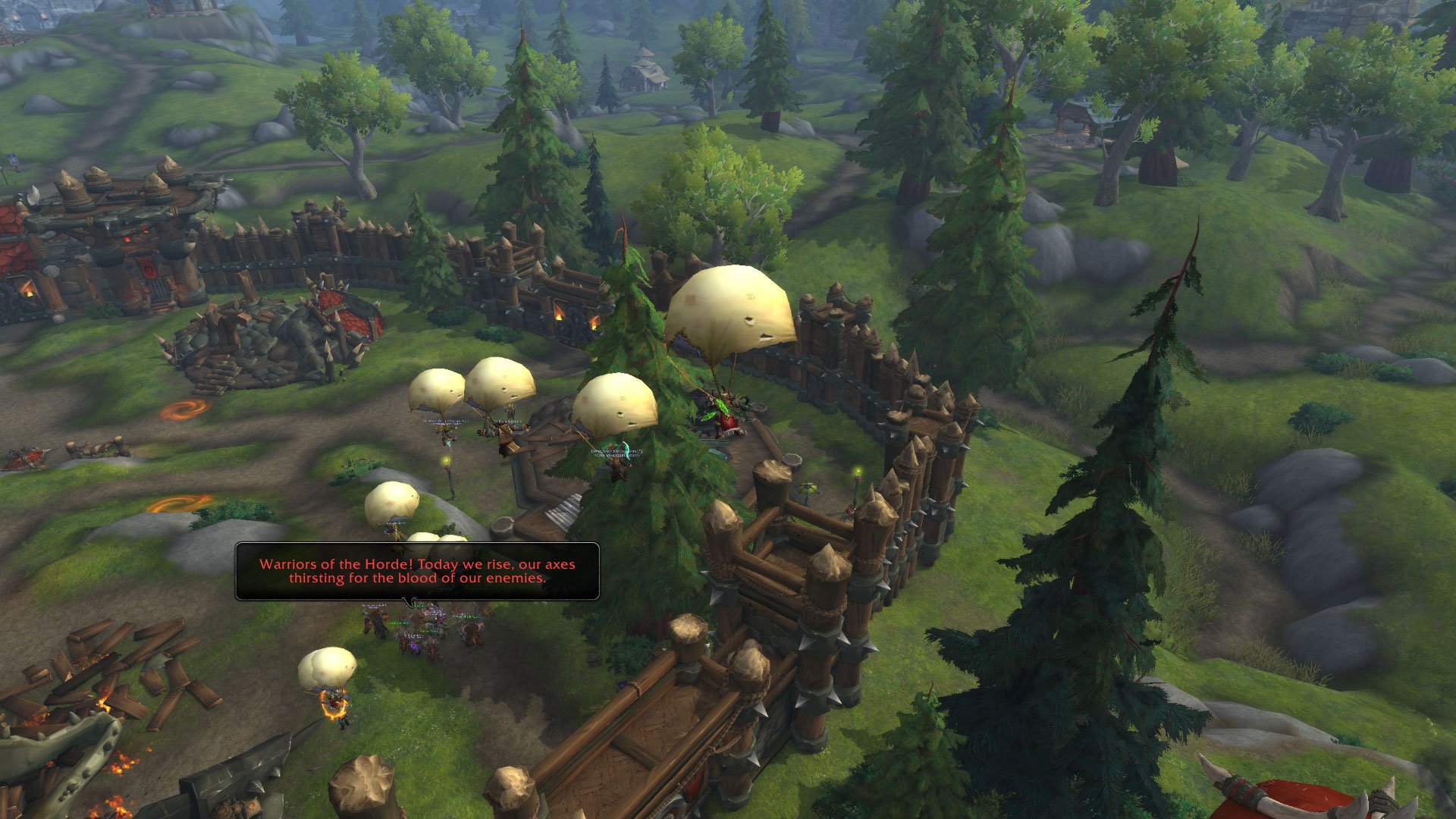 There is potential here, and not so much with the real queued “Warfront” mode: but with the deliberate open world questing system that funnels players into the same location. For now, I’m still very content with the expansion. My next mission is to unlock either the Dark Iron Dwarves or the Mag’har Orcs and attempt to earn one of their heritage armor sets (read: level them completely to 120 without boosting). I’m already set for part one of the flight quest, which just shows how much I’ve been playing!

Hopefully Blizzard can whip something up to keep things fresh in addition to their regular content drops, as the legacy ofBattle for Azerothdepends on it.