What I want from Fallout 4

I’m a huge Fallout nerd. I can wax poetic about the Fallout games and how much they mean to me all day (I’ve done it before), so to say I’m looking forward to what Bethesda does with Fallout 4 is a little bit of an understatement.

I do have some requests though. A wish list of things I would personally like to see in the next installment. 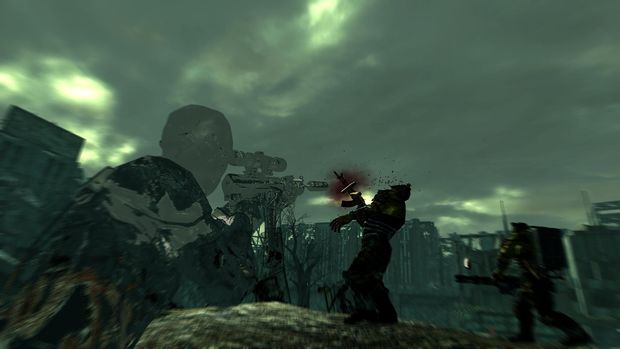 I’m going to take for granted that better gunplay is a given for Fallout 4. The awkward, inaccurate shooting of Fallout 3 was probably the most common complaint about it, and New Vegas‘ attempt to address it with a janky iron-sights system was so rough and amateurish that it felt like a hacked together mod. Fallout 4 will obviously have to do better in the guns-and-ammo category, so I’m not going to waste my breath begging for it.

What I will beg for though, is better stealth design.

Some of the best moments in Bethesda’s games have emerged from the shadows. The Thieves Guild and Dark Brotherhood had the best quests in Oblivion and Skyrim, encouraging many players to roll up at least one sneaky character. I know I personally spent a huge chunk of my time in Fallout 3 trying to skulk through super-mutant camps, silently seeding the area with mines and booby traps before pulling down on some mutant and watching the chaos pop off as his buddies came running.

When done well, the tension and power dynamics of stealth can provide some of the best gameplay around. Bethesda seems to know this. It includes so many quests and options in its games that encourage you to be a sneaky little jerk. So why does sneaking around feel like some after-thought, Scooby Doo bullshit?

The old “crouch down and watch an icon that tells you if a raider can see you or not” routine isn’t going to cut it anymore. Stealth should be more than a factor of your sneak stat and a matter of breaking line of sight. I’m really not interested in another stealth experience that allows enemies to pick you off from 50 yards away in the dark like you were holding a road flare if your sneak skill is low, or let you squat down straight in front of their shins like you’re the Invisible Man if the skill is pushing 90 and above. Make stealth active, give us something to do to make us feel sneaky. 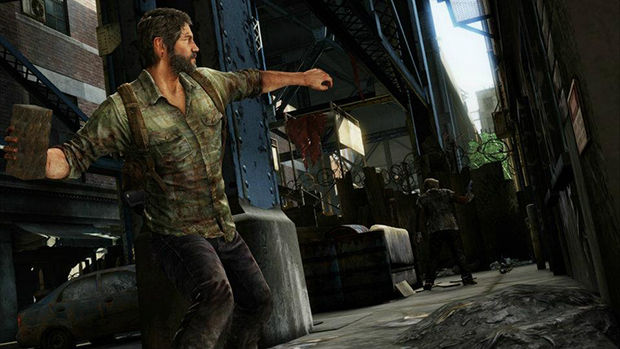 Instead of making the Sneak skill and active camouflage gear the end-all-be-all of stealth, how about throwing in some active abilities to let us dynamically manipulate the enemy? They don’t have to be complicated. Take a page from the Far Cry games and give players with a moderate skill investment in stealth the ability to throw a distracting rock or bullet casing to draw enemies away. Make some cubbyholes or hiding spots that only intermediate ninjas can use. Let Sneak-Kings focus down like Joel from The Last Of Us and get some “I’m super good at hearing” ghetto-SONAR ability.

I’m not asking for Metal Gear Fallout: Sons of the Atom Bomb or anything here. I understand that in a game as big and complex as the Fallout games have been, you can’t layer on every little system and nuance you’d like (that’s what paid mods are for, am I right folks?) but I’d like to see something to make crawling around in the shadows fresh for Fallout 4. 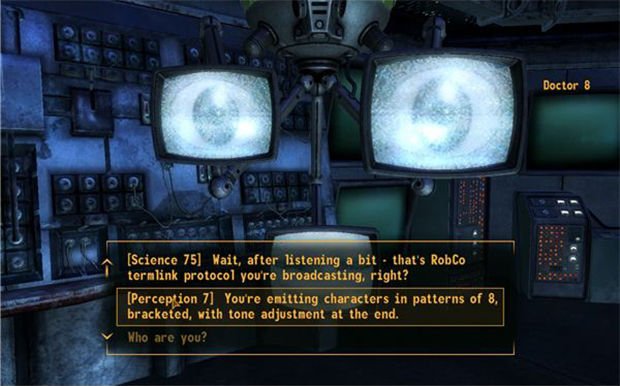 One of the things I love, love, LOVED about New Vegas was its focus on non-combat skills. Reaching back to the original Fallout, New Vegas went out of its way to incorporate skills like barter, repair, and science outside of their obvious (and boringly pragmatic) purposes way more than Fallout 3 did. This is without a doubt the right direction to move in and I would love to see Fallout 4 double down on the idea.

I love this idea because it makes each character feel unique. My tech obsessed teenaged hacker had a much different experience in the Mojave Wasteland than my cannibalistic night stalker. Not just because she preferred to melt her worries away with a stream of molten plasma while he would literally cut to the heart of a problem; they moved through the world differently, physically and socially.

She would hack into systems, open doors, appropriate security drones, all that good, typically sneaky stuff. But she was also able to use her skills as a currency, occasionally repairing broken gear or fixing otherwise unsolvable problems for people in the Wasteland. She fell in with the equally tech obsessed Brotherhood of Steel and it felt natural. My cannibal used his detailed knowledge of anatomy to occasionally work as a makeshift surgeon, appearing as a wolf in sheep’s clothing to the unaware, and was invited into a cabal of secret people eaters. Each of them had opportunities and moments that were totally unique and exclusive from each other and that’s amazing. That’s exactly what Fallout should be about.

I just don’t want to know about it up front. 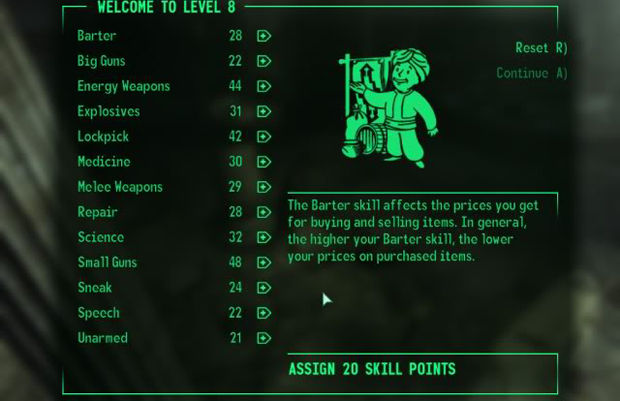 I would love a little more subtlety and mystery when it comes to skill checks in Fallout 4. As I loved how New Vegas worked, I couldn’t help but find the giant, full caps skill messages jarring. Nothing quite reminds you “oh yeah, you’re playing a videogame” like a big old block of mechanical text that says something like [MEDICINE 60 REQUIRED].

Fold skill checks into the game more organically. If a player doesn’t have the skill required to pull something off, don’t show the option. Or, maybe show the option, but don’t promise success. Let Prof. Goofus with his measly 15 points invested in repair set off a bomb when he tries to defuse it. Let someone who thinks they’re a smooth talker chat their way into a slaver’s pen.

I know some people may prefer to know their options up front and the stats they should shoot for, but I’m a big believer in surprises and trusting the player to figure things out. Besides, if you really want to know the stat requirements for every interaction, there are always wikis and FAQs. 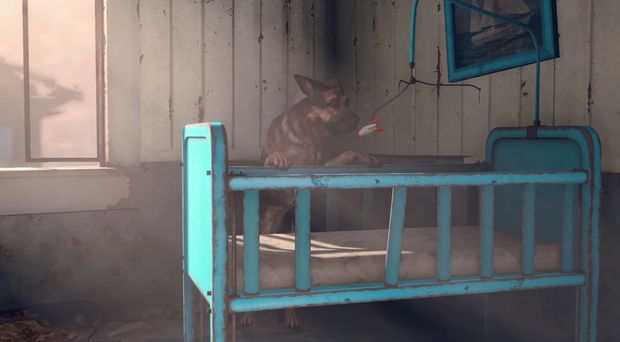 I can’t believe I’m saying this, but maybe make it a little darker?

Okay, hold on. Don’t go branding me with the mark of #Darksiders2 just yet. I’m not asking for Fallout 40K edition here and I’m not saying I want some grim and dirty “realistic” depiction of a blasted out radioactive wasteland, because realism wouldn’t do the game many favors. All I want to see is Bethesda even out the tone. Make the normal world a little darker and saner so the black humor and absurd moments can pop in contrast.

I love the line Fallout walks, that razors edge between unimaginable despair and corny ’50s sci-fi pulp. It’s a difficult balance to find and while I think both Fallout 3 and New Vegas did a decent job at it, I think they could have done better. I think the problem is that neither game is willing to let you get your feet under you before piling up the silly stuff.

Fallout 3 starts in a Vault isolated from the realities of the world, so I’m willing to put up with the greaser shenanigans of the Tunnel Snakes. But then the first town you come across in the real world, Megaton, is full of equally goofy shit and ridiculous people. You go from one silly place to another without a big change in tone when the game could have set you up for a gut punch by showing you a very zany life in the Vault and then plunging you into the harshness of the wastes.

New Vegas starts its story by introducing you to Victor, a robotic cowboy with a TV in his chest and machine guns in his arms like a very well armed Teletubby. Again, don’t get me wrong, I love the idea of a robot cowboy, but couldn’t we wait five dang minutes to establish the stakes and condition of this post-apocalyptic world before saddling up on the wacky horse?

When you come across a crashed alien saucer, find a settlement of pacifist super-mutants, or liberate a slave mine with Lincoln’s very own rifle, it should be a hell of a moment, not business as usual in the wastes. Fallout 3 and New Vegas come at you with the bizarre and ludicrous so hard and so often that it runs the risk of losing its impact and blurring together. I’d like to see Fallout 4 avoid that if possible. Don’t get rid of the black humor and ridiculous moments, just space them out a little more, or make the average day in the wastes a little more grounded so they can stand out better.

Going by the very sombre trailer we’ve seen, I may just get my wish on this one. 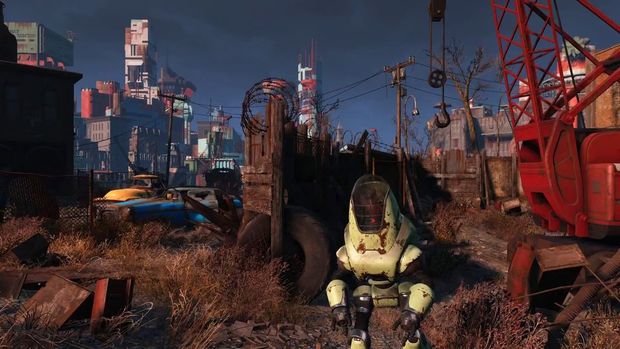 What are you looking forward to in Fallout 4? What kind of perks do you want to see? What kind of companions? How much are you hoping all these rumors about a voiced protagonist and a very focused main-plot with a mandatory male character are black and filthy lies? I know I am!

Hopefully we’ll find out more at Bethesda’s big event tomorrow. Then we can either sing the praises or count our dead.