When it comes to working out which games are eligible for our Game of the Year voting process, the issue of a re-release is a thorny one. Plenty of games are either console or PC exclusive, only to have a version come out a year later on another system.

The question we ask ourselves is: Does this new version do enough to justify inclusion in our voting for another year? After some discussion, it was decided that the 2013 PC release of Spelunky wasn’t eligible for our 2013 GotY voting.

The hell with that, Spelunky on PC is my game of the year — it’s the game I’ve been singularly obsessed with since its release back in August. Whilst I’m happy with the top 10 games I submitted for voting, there was only one game that really sucked me in and here’s why. 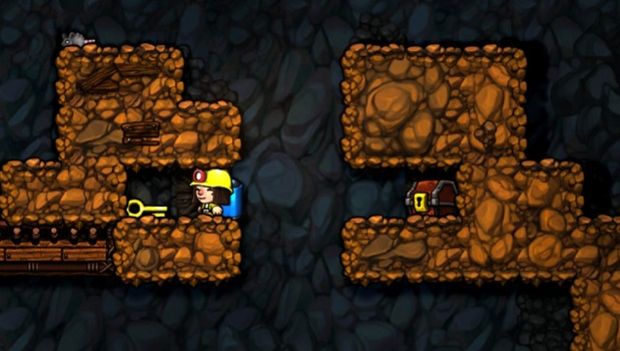 So why Spelunky? Why not any of the other “roguelikes” that were released in 2013, like Rogue Legacy or Risk of Rain? Well there’s a couple of reasons both of which are related; firstly was the brilliant addition of the Daily Challenge and the other was The Daily Spelunk, hosted by Jordan and Conrad. Combined with Spelunky’s precise platforming and compelling risk and reward structure meant I just kept playing and playing.

If you don’t know, the structure of Spelunky’s levels is randomized every time you play. You’ll always have the Mines first, then the Jungle, Ice, Temple and, if you can make it there, the Hell levels but the actual layout of the platforms is random. The Daily Challenge is a set of levels that all players can try their luck on with everyone gunning for places on the daily leaderboard. As someone who found the Autolog in Need For Speed: Hot Pursuit a key reason to keep racing, the Daily Challenges became the reason to log into Steam each day and keep trying. The drive to get a better score than my friends was like dangling a particularly tasty carrot in front of me. 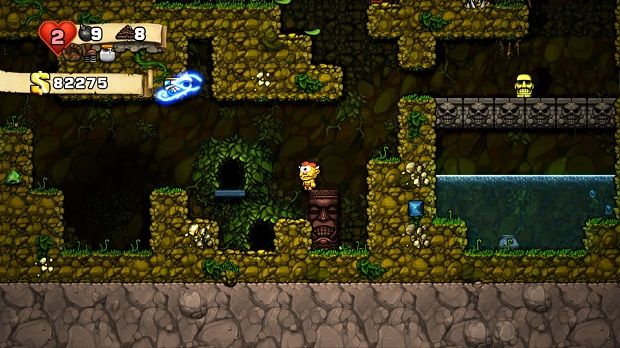 As someone who is admittedly pretty crap at videogames, Spelunky’s Daily Challenges became almost like a training exercise. Every day I felt I was getting a little better, understanding the systems a bit more and working out which risks would be worth the reward. Part of this understanding came from watching The Daily Spelunk; Conrad and Jordan’s expertise was invaluable to discovering Spelunky‘s quirks and secrets.

I’ve not been one to watch Let’s Plays but that’s mainly because I’ve always preferred story-driven games and I’m no fan of spoilers. The Daily Spelunk was different as it was more like watching a cooking show; Conrad and Jordan were showing what and what not to do, where to experiment and what risks to take. The guys were demonstrating what the right ingredients were to a successful attempt.

Conrad was the guy who made it clear what was drawing me back and back to Spelunky: the gameplay is a perfect mix of risk and reward. Despite the randomness of the levels, there are constants that once learned, help you form a strategy in how to take on the game’s early challenges. At first, I used my bombs and ropes freely in the mistaken belief that they would always be plentiful in the shops and crates in later levels.

This, of course, wasn’t the case and I would find myself missing out on vital equipment and other items because I didn’t ration my supplies. One of the most vital lessons I learned was to just take my time and pay attention. Considering I love stealth games, where I have to take my time and take notice of my surroundings, it’s a surprise that it took me so long to adapt to Spelunky. It’s not just a simple platformer where reactions and dexterity are necessary to proceed; a good plan and caution are vital too. 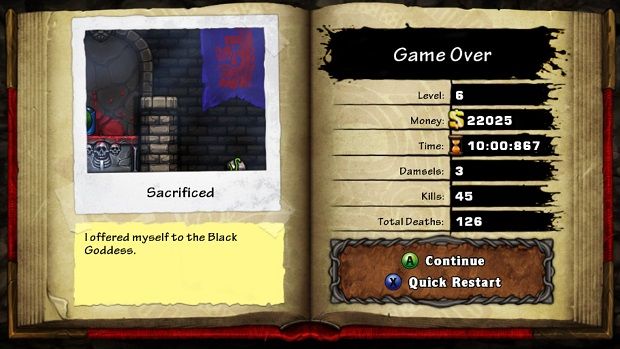 I’ve lost count of how many times playing Spelunky where I’ve just dived into the unknown and gotten an arrow to the face or fell into a nest of tiki traps. These days, I’ll take my time in the Black Market because I know one stray tiki man with a boomerang or an exploding frog and I’d have a host of angry storekeepers all gunning for me. Of course, there’s some times when you want to take a risk and rob a storekeeper, especially if they’ve got a jetpack at the start of the game. That’s a decision that you’ll have to live with for the rest of the game. It’s all about risk and reward and it’s what I’ve found so compelling in 2013.

These days my daily routine involves getting home from work, playing the Spelunky Daily Challenge, then getting some dinner and maybe doing cleaning and other chores. Then it’s another couple of runs in Spelunky, then some writing for Destructoid, then some more Spelunky and finally to bed. Then I’ll probably complain about how I don’t have enough time to play more games but truth be told I’d play more Spelunky. That’s how I spent half of 2013 and it looks like that’s how I’ll spend 2014 too.

I can’t see another game coming next year that’s going to give me the same level of challenge, secrets, and depth that Spelunky has; that’s why it’s my real game of the year for 2013.