Rayman Legends is finally almost here. The delay of the Wii U version after the announcement of PS3, 360, and Vita ports seems worlds away, but I’m finally about to embark on the evolution of the gorgeous, 2D platforming goodness I fell in love with in Rayman Origins. Better still, this past half year of extra development time has brought about a lot of additions to the game that we wouldn’t otherwise have seen.

Series creator Michel Ancel called Legends “the biggest Rayman game ever,” as well as the most polished. There was trepidation even at Ubisoft Montpellier when the game got pushed back because, Ancel noted, the team “didn’t hear about how [they] would be able to use that time.” Turns out, they were able to cram quite a few more things into Legends, along with churning out several excellent ports.

In addition to the addictive Kung Foot minigame I posted about earlier, Legends has gained “Invasion” levels, an antagonistic appearance by Dark Rayman, new 3D bosses, and complete remasters of the team’s favorite levels from Rayman Origins. 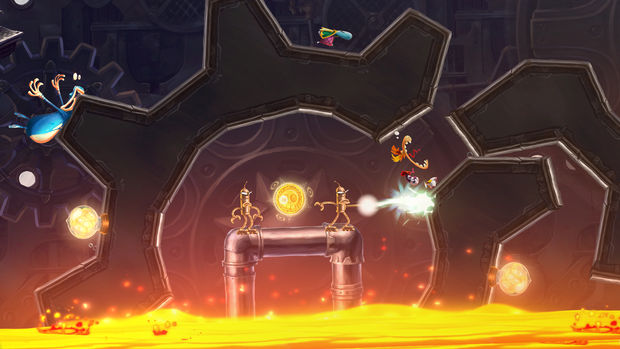 “When we look at it now, honestly, the delay was a good thing,” lead game designer Emile Morel said. “Right now, I don’t see what more we could add to it.” Seems all these recent months spent weren’t idly wasted on thumb twiddling, because Legends is bloated with great content.

The Invasion levels are a mixture of existing assets. Legends is separated into different, self-contained worlds, each meant to “feel like an adventure,” and provide some of the cohesion and framing its predecessor lacked. In the Invasion levels, the disparate worlds collide in an unholy union. Each main level has its own Invasion level that will unlock at various points in the game when it can be assumed your skills are up to snuff; for example, an early Invasion level might not unlock until you clear a more challenging world.

Each Invasion has a 60-second time limit in which to save three Teensies that are strapped to bottle rockets at the end of the level. If your seconds start spilling over, Teensies start getting astronomical with a punctuality that Nicholas Cage would admire. 60 seconds. 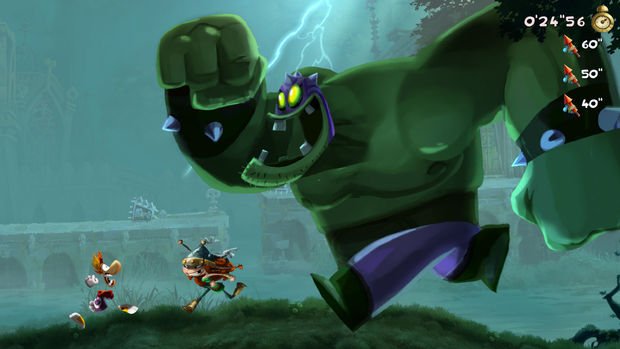 These challenging, fast-paced levels seem to be a nice analog for some of my favorite Origins levels, the rhythmic chest chasing levels. They require deft timing. Things get complicated in harder Invasion levels when Dark Rayman begins tailing you and you have to avoid him without sacrificing momentum or timing.

As for the remastered Origins levels, “some of the levels we changed them almost entirely,” associate producer Greg Hermittant noted. I played a few of the early ones which were much intact, save for the aesthetic boost with Legends‘ look and lighting, and the addition of Teensies to save scattered throughout the levels. Apparently some Murfy functionality was even added to some of the remastered Origins levels.

“When they asked me what’s the best version,” Morel said, “pick the system you like to play on.” Indeed, the main dividing factor in the Rayman Legends experience comes down to whether you want to use a touchscreen or not. While I find the touch screen functional to be novel, I also find it slows the game down more than the traditional controls, in which Murfy is mapped to a face button and will automatically go approximately where he should be. 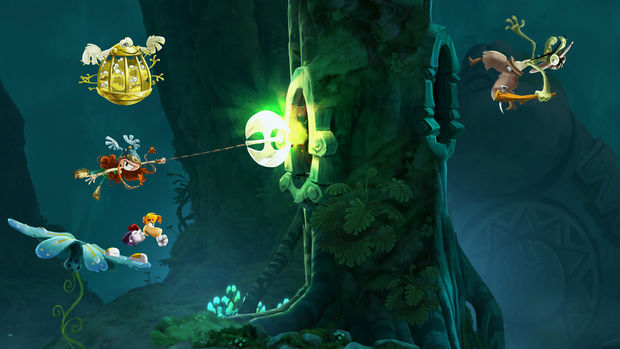 “We wanted to make sure when players start a level with Murfy they wouldn’t groan and want a more classical level,” Morel explained. “We want to keep the rhythm of Rayman.” Using Murfy with the Xbox controller was relatively painless. “You have one more button to press, but you can play very fast.” Having to occasionally watch out and direct Murfy definitely added a new wrinkle that I could sort of appreciate as I got into the groove and worked the extra layer into my strategy (I did all the speed runs in Origins), though I’m still hard pressed to say the addition is entirely wanted.

The 3D bosses at the end of each world also add a small, but welcomed layer to the experience. At the end of the newly shown off Fiesta de los Muertos — which you play much through after having been transformed into a chicken — you fight a giant, 3D luchador who menacingly sits behind the field of play and tries to squash you with his fist.

Legends is the biggest Rayman ever and I’m beyond excited to play it to death.