Yes really: Child of Light is a JRPG from Ubisoft

Made by the team behind Far Cry 3

Yeah, you read that headline right. Trust me, I was having a hard time wrapping my head around it too, but sure enough, a Japanese-style role-playing game from Ubisoft. Even stranger, Child of Light is by writer Jeffrey Yohalem and creative director Pat Plourde, two of the main people behind Far Cry 3.

Child of Light is a 2D action JRPG made on the UbiArt Framework engine, the same engine that’s made that last two wonderful-looking Rayman games. The team is looking to make a love letter for JRPG fans, those that fondly remember the golden age of Squaresoft, with influences from Final Fantasy to Grandia.

The story follows princess Aurora, a young girl from 1895 Austria and the daughter of a Duke. One day she falls ill, but instead of dying she wakes up in the lost continent of Lemuria. She’s tasked with recovering the sun, moon, and stars which have been stolen by the evil Black Queen, but it’s also a story of Aurora, her evolution as a character and her quest to return to her father.

Gameplay sees you exploring the world, solving puzzles and lending a helping hand to those that need it. And of course, there’s the whole RPG fighting mechanic in place, transporting you to a battlefield with each enemy encounter and taking turns attacking one another through the active-time battle system. There’s a bar on the bottom of the screen during battles to display when it’s someone’s turn to attack, at which point you can use items, attack, or defend yourself from the enemy. 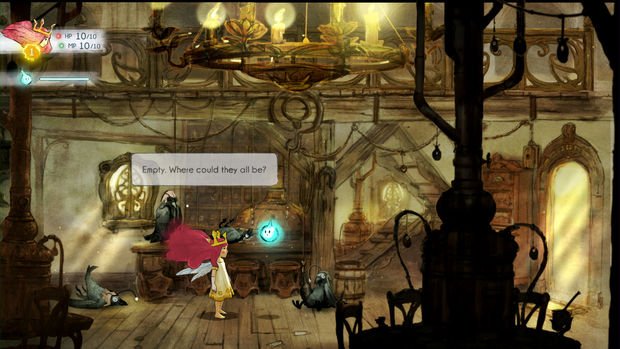 You’ll encounter numerous characters that will join your party, and for the demo I recruited an old man to my team. How big the party can get wasn’t detailed, but you’ll be able to level up various skills for your characters, plus equip different items/weapons to your team.

Pretty traditional stuff here, with the exception of one key character: Igniculus. He’s this blue flying fairy-like creature that’s kind of like Murphy from Rayman Legends. Player one can switch between Aurora and Igniculus whenever needed to solve a puzzle or help out in battle. That, or a second player can join your game and control Igniculus right alongside player one. Igniculus is needed to solve various puzzles, and he can also help distract enemies while in the open world or even during fights.

You probably won’t want to avoid fights that often though as you’ll need to level up as much as you can. I got to the first boss in my hands-on time on the PC in combination with a PlayStation 4 controller and thoroughly got my ass handed to me. 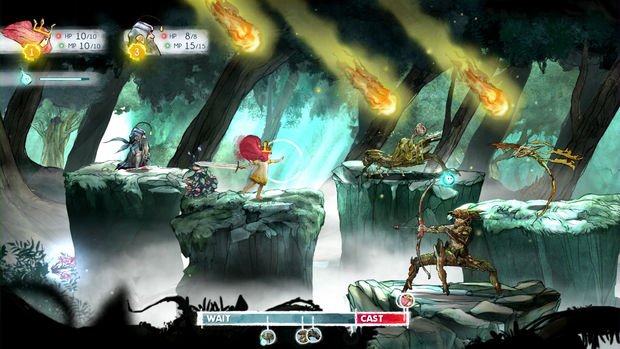 The overall theme of the game is very fairy tale in nature, but don’t let that fool you. As gorgeous as this game is in motion, there’s a very dark theme to it and isn’t meant to be taken lightly. A lot of inspiration comes from grown-up fairy tales, the ones that don’t hide the dark stuff kind of like Disney movies. Kids can appreciate them, as can adults. The fairy tale nature even extends to the writing of the game, as all the dialogue is written out in rhyme and ballad form as if everything said feels like a poem throughout.

The developers promise that the game will be pretty “meaty,” in that there will be a lot on offer to please JRPG fans. Yeah, it’s still weird saying JRPG and Ubisoft in the same article. So how did something like this even happen? 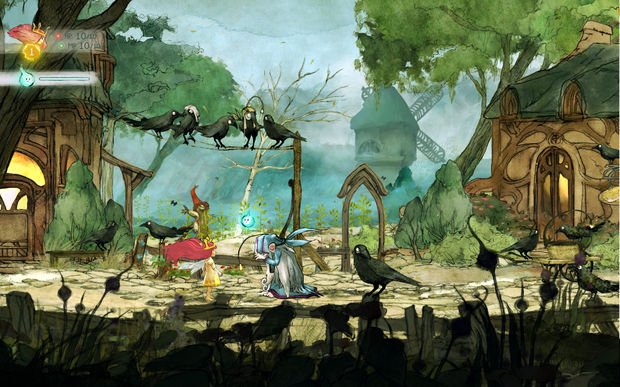 Jeffrey Yohalem, writer and co-creater on Child of Light told me that “in October, Pat Plourde, the creative director on Far Cry 3, came to me and said ‘I want to make a JRPG and I’ve been looking at some fairy tale references, like Arthur Rackham drawings, and I want something that kind of feels like that, that has that kind of mood.’ He also had some music from Final Fantasy that he really liked and so he played that for me and we talked about it. We got in room together and created this world, the characters, and this story.

“During that time as we were developing it I really felt like this is it. This is something that I really want to make, it speaks to me as an artist and I dropped everything else that I was doing and joined Pat to do this.”

It was also a conscious goal from the beginning of the project to create something that was the complete opposite of Far Cry 3. Their aim was to create something soft, poetic, and even feminine. To that point, they really wanted to make a difference with the portrayal of women as there’s “a serious lack of representation of strong female leads in games.” That said, both games are also similar in that they’re coming-of-age stories set in dream worlds.

Ubisoft had over a dozen games on display in its digital fall preview event Destructoid attended, and the last thing I expected to see was a JRPG from Ubisoft. That said, Child of Light was easily a highlight of the event for me, and says a lot about how Ubisoft gives a lot of freedom to its developers to follow passion projects like this amidst the heavy triple-A focus of the company. Hopefully this one is able to deliver on its lofty promises.