Well, that’s what ZMR (Zombies Monsters Robots) is all about. During GDC, we got to go hands-on with it and see how crazy it can get. Developed by Yingpei Games, previously known as Epic Games China, ZMR plans to bring a new spin on over the top action, while keeping the barrier for entry for this free-to-play title fair and fun.

Originally planned to be released as Mercenary Ops, an iOS and PC free-to-play military shooter, the developers at Yingpei went back to the drawing board and re-branded the title as the ridiculous and self-aware shooter you see now.

In the world of ZMR, an experiment with inter-dimensional travel goes awry and causes monsters and supernatural forces from parallel worlds to invade our own. It’s now up to several private military companies to stop the threat, and get cool loot in the process. Players will be able to team up with others online battling waves of zombies, monsters, and robots while defending locations, acquiring new firepower, and taking down hulking boss monsters in ridiculous fashion. 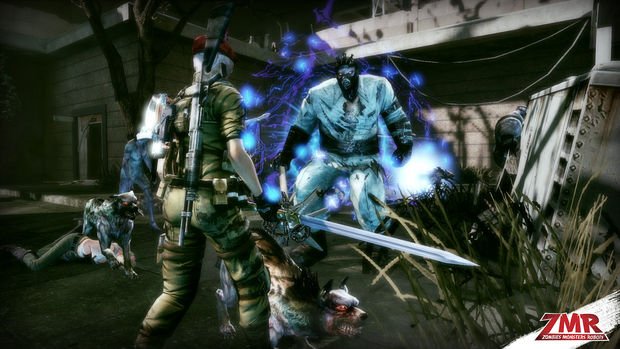 During our hands-on time, I got to play with other journalists in the level known as The Pitt. In our time with the game, we had to work together while fighting off waves of zombies outfitted with explosives, poison gas, and other dangerous tricks. For the most part, it’s a standard horde mode, and communication and teamwork is key to winning; plus, knowing when to fortify windows, create barricades, and activating the various traps around areas of the map helps a lot too.

For this match, I selected a pre-made character that came with two-assault rifles and a electric katana that shocked zombies. He also came with some cools perks, such as placing auto-turrets. This helped to show what players can expect in ZMR. There’s full character customization, clan support (called Corporations), and several different modes to choose from. There are many different weapon types, clothing options, and other areas for customization to choose from, and they’re easy enough to acquire without the use of real money. 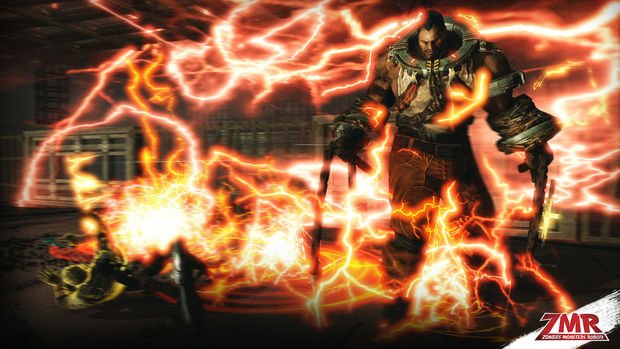 Eventually, we cleared through all the waves of zombies. But instead of taking in our victory, we see a cutscene with a mysterious and massive enemy, known as The Executioner, who is clearly upset that our commotion woke him up. This guy was a hulking behemoth that used electrified whips to lash out at us. When he was on the ropes, he summoned more zombies and activated traps around the arena to close the gap. The boss fights are the capper for each map, and players will have their skills put to the test when they work together to take them out. It was a challenge, but we eventually took him out and scored a victory. It was fun, and it was good change of pace after the twenty minutes we spent fortifying locations and leading zombies down choke points.

The Pitt offered a good indication of what to expect. The action was pretty hectic, even with just four players. There were many times where we all got swarmed, which sent others scrambling. It was pretty fun, if fairly standard for a free-to-play shooter. However, the developers plan to spice things up with new game modes and content packs. 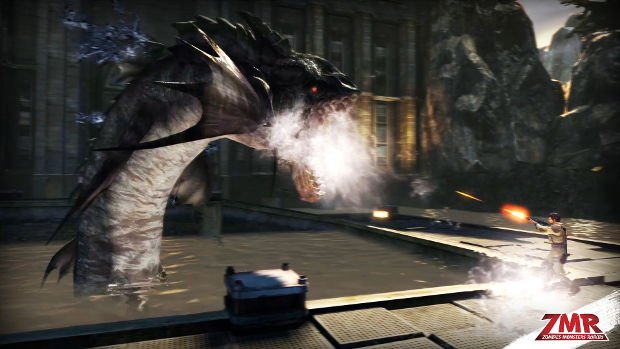 One game type, called Patient Zero, allows players to control the monsters as they attempt to wipe out other human players. Surprisingly, they plan to release new content packs every month after the game’s official launch. They even teased a map called Dino Island, which obviously pits players against the terrible lizards. And one more thing, they have guns strapped to their backs too. Who doesn’t love that idea? Hell, they should’ve made them a part of the initial package, but I guess ZMRD sounds a bit rough.

Currently planned to be released sometime this Summer, the publisher of ZMR, En Masse Entertainment, plans to roll out an alpha test period this April, followed by an early access beta sometime in May. I was pretty taken with ZMR, and it was definitely nice playing a title at GDC that didn’t take itself so seriously. It knows how ridiculous and cheesy it is, and it’s having fun with it. That’s definitely a plus in my book.