As the first current-gen Naruto, Ultimate Ninja Storm 4 is a huge visual leap

There are more Narutogames than one sane person can possibly handle. Although Bandai Namco Entertainment owns the license, a number of different developers have worked with the gaming side, most notablyCyberConnect2, who has been working on the Ultimate Ninjasubseries from the very beginning.

I had some hands-on time with Naruto Shippūden: Ultimate Ninja Storm 4at Namco Bandai’s recent Global Gamers Day event, and although it still has a lot of the same repetition issues as its predecessors, it looks pretty damn slick so far.

Sometimes when a developer is able to focus solely on the production of a current-generation build, it shows. That’s the case withUltimate Ninja Storm 4, which is easily one of the best-looking anime games I’ve ever seen. Despite the screen being constantly filled with blasts, everything runs very smoothly, which is crazy when you consider the amount of detail present in nearly every battleground. For instance, one encounter had a giant animated nine-tails monster looming about, and even though it wasn’t directly involved in the fight, its presence was felt.

Since this is supposed to be the last game in the Ninja Stormseries (the manga just ended), it will feature many elements from the final stretch of episodes, as well as the last film. New Ultimate Jutsu techniques are in, as are new characters like Hanabi Hyuga. Players will have the opportunity to switch leaders while playing story mode in many sequences, which was one of the most requested features from fans. 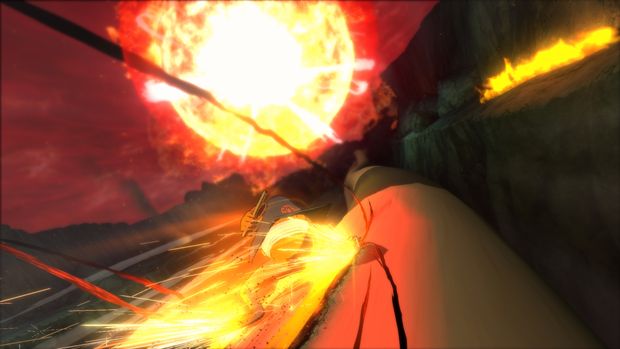 I was able to chat a bit about the new game with the CEO of CyberConnect2, Hiroshi Matsuyama, who arrived at the event donned in an appropriate costume. When asked why he enjoyed working on the franchise so much, he responded, “I want to create a game where I’m satisfied as a fan first, and then I can know that fans will be happy. I wanted to support the series by creating a masterpiece to close out this chapter of Naruto.”

I asked him about the advantages of having new systems as a lead platform, and the biggest change that he is excited for is the focus on “bigger battlefields, with more open air. We want to really give players a sense of scale and we can do that now on the PS4 and Xbox One. There will also be more animations that weren’t possible before, like costume damage details, even things like water extinguishing fire damage.” 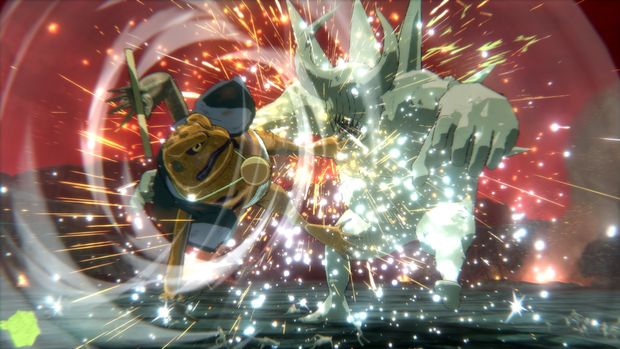 From what I could tell based on my demo playthrough, these claims were true, as Ultimate Ninja Storm 4is ridiculously cinematic, almost like the equivalent of a Michael Bay movie in anime form.

By that same token, it can be repetitive to watch said cinematic play out in an actual battle, like one fight that had a CPU character using the same 30-second invincible move every minute or so. The good news is once you get through it, it’s off to another fantastic setting that looks nothing like the others, chained together through QTE transition phases.

Naruto Shippūden: Ultimate Ninja Storm 4 is looking great so far, and I’m really happy withCyberConnect2’s decision to focus on newer platforms. It’ll be interesting to see where its involvement with the Narutoseries will go from here, because it is too good of a developer to stop now.