This is my crossover heaven

There’s been a lot in the gaming news over the past few weeks about crossover projects. We’re finally getting a good look at the next Marvel vs. Capcom game, that rumored Super Mario/Rabbids project seems to be a real thing, Puyo Puyo and Tetris are a match made in heaven, and Warriors All-Stars may be the mash-up I never knew I wanted.

I love a good crossover. The games excite the fanboy in me. I still remember picking up Marvel vs. Capcom: Clash of Super Heroes for the Dreamcast. Boy did I play the crap out of it. All of this crossover talk got me thinking about what companies or franchises I’d love to see together in one game. I though this week’s question would take me a bit to figure out my answer, but actually, it came quite quickly for me: I want Atlus vs. Capcom.

Is it the most original answer? No, but I don’t care because since I thought of this, I haven’t been able to stop thinking about it. I’m a casual fighting game fan and I love the Vs. Capcom games purely for their ability to dazzle the elementary school gamer living in my soul. SNK vs. Capcom 2? Flawless. Marvel vs. Capcom 2? Resplendent. I love these games and having the characters of Capcom square off with the best of Atlus is something I think we’d all enjoy.

Imagine pitting Firebrand against Jack Frost. Picture fighting against Ryu with Catherine. Think of how fun it would be to go toe to toe with Keith Wayne from Power Instinct as you play as Rusty from Dark Void Zero. Make doctor fight doctor when you do battle against Dr. Wily as Valerie Blaylock. Envision the look of amazement on your face when you summon Mara in as an assist character.

If something as ridiculous as Tatsunoko vs. Capcom can not only happen but be one of the greatest fighters I’ve ever experienced, I will hold onto hope for a crossover that sees the best of Capcom clash with greats of Atlus.

Tony Hawk 5 was just…mediocre. Even some of the lesser entries in theTHPSfranchise proper could hold their heads high when compared to it. This iconic and trendsetting series deserves better than that prosaic sunset, so having a more experienced studio like Sega (who still employs former members ofSmilebit) handle it along with some ex-Tony Hawkdevelopers would be a perfect match.

There’s just so much that could go right if they had the budget. It wouldn’t be too difficult to hookHideki Naganuma (Jet Set‘s composer) up with a US music producer that’s familiar with the series, and have them collaborate on a new score — I can hear the Japanese punk tracks in my head. 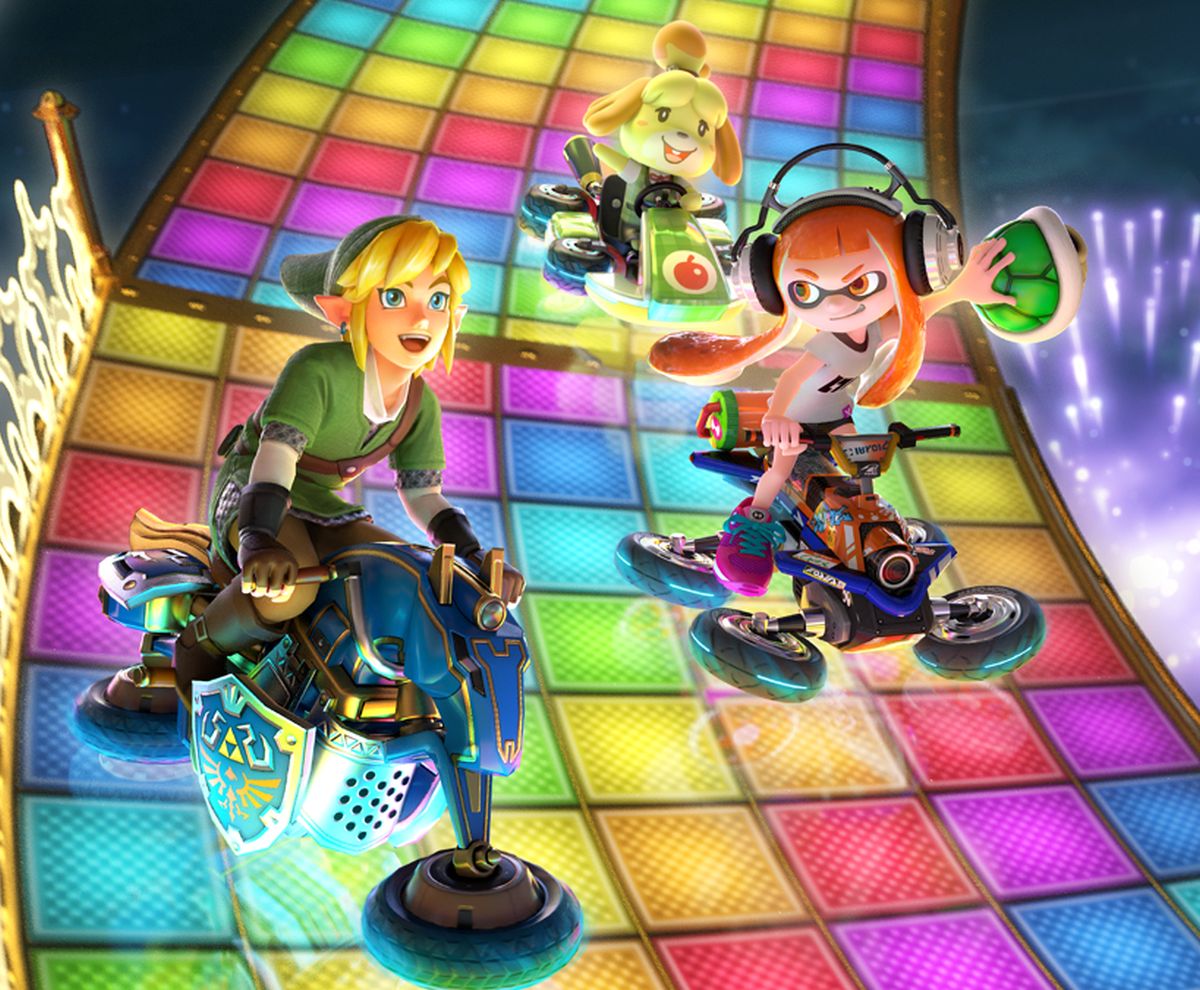 Once upon a time, Mario Kart was exactly what it said on the tin: Mario kart. Those days are far behind us. With Mario Kart 8 and Mario Kart 8 Deluxe, we’ve seen a greater integration of Nintendo series than ever before. You can now race as Link, Villagers, Isabelle, and even Inklings. You can duke it out on Urchin Underpass, or blaze across an Excitebike arena, a track based on Hyrule, two F-Zero tracks, the Animal Crossing village, and a forest strikingly reminiscent of Xenoblade‘s Nopon village.

Remember the Rosalina reveal trailer for Super Smash Bros. 4? After seeing Kirby on his Warp Star join the Mario crew on Rainbow Road, I was actually somewhat disappointed that it turned out to be ‘just’ a Smash Bros trailer. All I could think was how cool it would be to have a mix of Kirby Air Ride and Mario Kart. And be honest: who wouldn’t rather race as Kirby than a random Mario enemy such as Lakitu or Dry Bones?

You could easily have a bunch of Nintendo staples in this game. Fox in an Arwing, Samus in her Gunship, Captain Falcon in the Blue Falcon (it’s already in the game, come on), Olimar in the Dolphin or the Drake, Pit can fly by himself, and for less obvious characters there’s surely a suitable kart, bike, or star for them to drive. Similarly, the possibilities for tracks are endless. Mario Kart 8 has already shown us that Nintendo can take essentially any locale from any game and make it into an interesting and fun race track.

It’s time to stop limiting the potential of the most popular kart racing series of all time. We’re half-way there already. It’s time for Nintendo Kart. 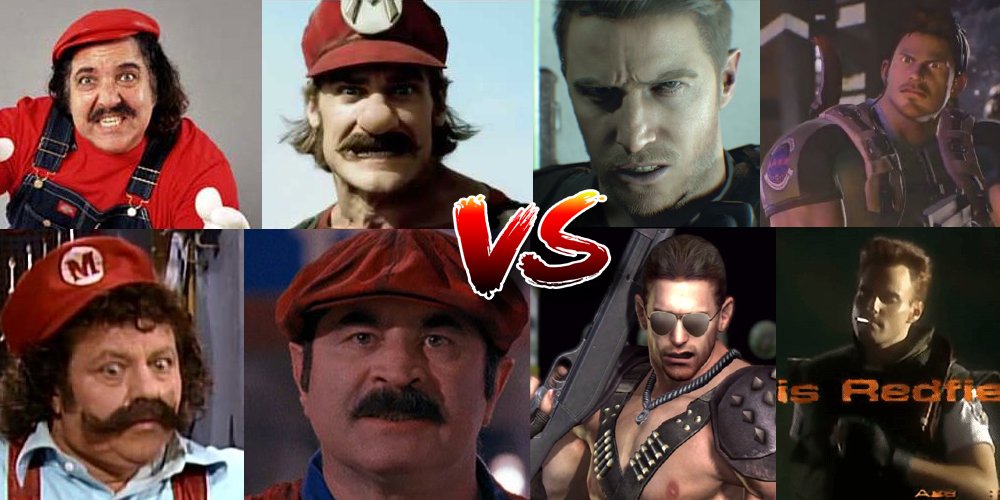 So what does that leave me with?

Golden Girls Vs. Sex in the City sounds good in theory, but in practice, Golden Sex in the Girls City sounds a little too urine soaked for my blood, or a little too blood soaked for my urine, depending on how things shakes out. So maybe En Vogue Vs. Destiny’s Child? On second thought, En Vogue would stomp Destiny’s Child so fast that it would barely be worth playing, sort of like that time agrown man beat up a little girl in 1960’s England.

So I guess I’ll go with Live Action Mario Team Vs. The All Chris Redfield Boy Band, but only because I literally have no other choice.

You know what the world needs?

Another Nintendo and Koei Tecmo collaboration.

After Pokémon Conquest and Hyrule Warriors, there’s still room for more Nintendo-flavored Koei games and I have a great idea, certain to please all those people who changed their minds and decided the latest Zelda game was the worst one — aZelda x Deception game.

When you think about it, it makes sense. Here were have two franchises where legendary heroes and other guardians of a realm seal away a great evil. To undo this, there’s sometimes a minion who seeks out the power and mystical MacGuffins needed to unleash Ganon or Satan. In Deception, it might be the daughters of the Devil, but in Zelda, that’s Agahnim or Zant.

Then the heroes/guardians show up to navigate perilous, trap-infested dungeons and awaken to their destiny as a courageous hero/sage/sage descendant that can help ensure evil stays sealed away.

In Zelda, those people always prevail, snatching away that mystical relic of Courage, Wisdom, and Power and sealing Ganon away. In Deception, the good guys die in the most Sadistic, Elaborate and Humiliating ways by walking into the dungeons full of traps activated by an evil girl who wants the mystical relics they have collected as well as their delicious souls.

Nintendo and Koei Tecmo can work with that. Zelda has eyeball columns that shoot lasers, sentient floor tiles, arrows that shoot from walls, boulders, switch-activated devices that make wind blow or flood an area, living statues and suits of armor, chickens that assault people in swarms if annoyed and much, much more.

And who better to lead our heroes to their demise than the beings they just blindly trust no matter what? The race that they think they can just pluck out of their fountains and bottled up or be ordered by an ancient tree to be their sidekick? Have the little fairies form a union, overthrow all those supposed “great fairies” that clearly don’t care about them and forge a pact with Ganon so they can rule Hyrule by his side.

They could go through the dungeons, set up the traps and lead the heroes to them (“Hey, listen!”) so they die instead of obtaining legendary swords, awakening to sealing powers or obtaining pieces of MacGuffins. They’d have to keep the trust of the heroes by pretending to aid them, but I just see that as a way to extend a trap combo and torment them further before they die.

Congratulations Pixie, you win this week’s “craziest entry I want to play right this second” award.