Powerful in the right hands

Alani became available yesterday for the select few who have already invested in Battleborn past the base game. Everybody else will have to wait until May 31 for her to unlock (and then will have to spend a pretty sizable chunk of in-game money to use her).

I took her for a spin through a couple of story missions and competitive multiplayer. She’s not quite as easy to use as her fellow Eldrid support character Miko, but she fills some niches the mushroom doesn’t. 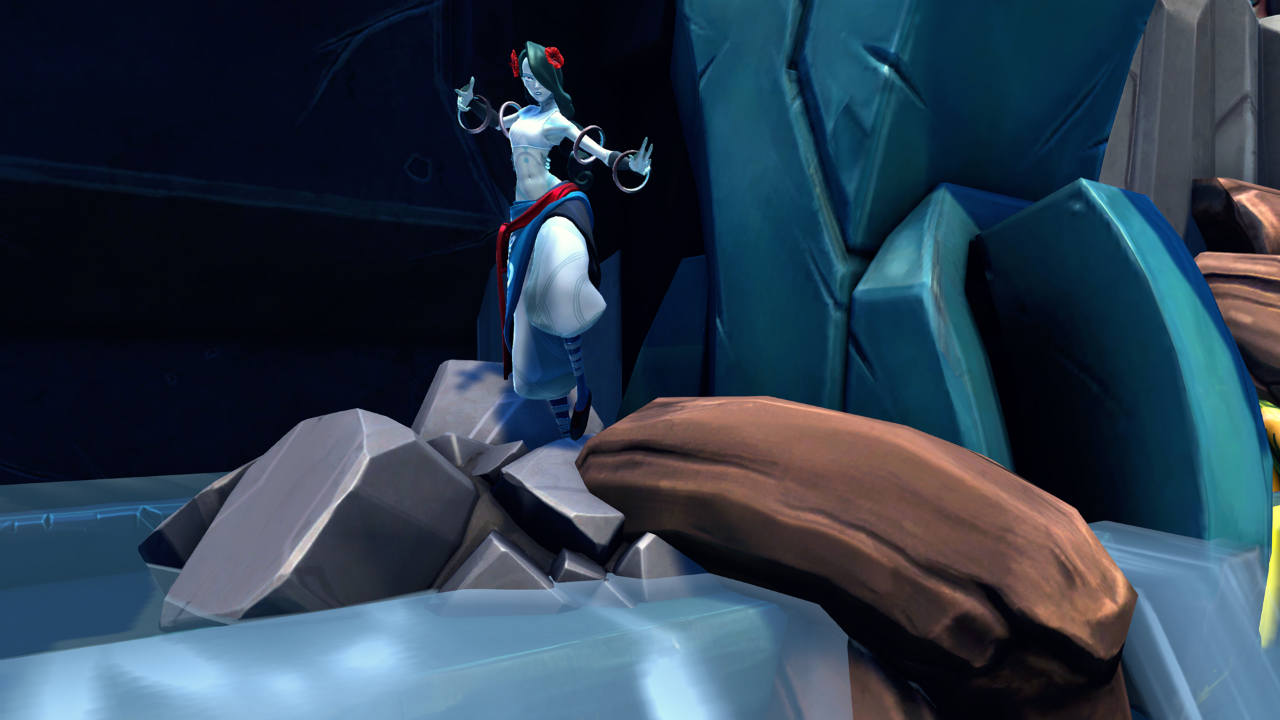 At first, she feels a bit like Miko, with a thrown projectile primary attack Torrent similar to Miko’s Combat Botany kunai. But the first major difference is in the secondary heal. Where Miko can put out a steady stream of healing over time, Alani’s Wellspring is better for burst healing, powered by having stacks of Osmosis. Osmosis is primarily gained by dealing damage with Torrent, so Alani can’t afford to just hide in the back if she wants to play support.

In story mode, I found her burst healing to be a great tool after reviving. With full Osmosis, I was able to revive a teammate and then immediately get her back to full health without having to stay trained on her or retreat. Otherwise, it was difficult finding the right time to use it. Barely hurt allies didn’t warrant a full heal, but severely damaged teammates were often far enough away that they had either retreated or died by the time I got there. By the end, the Ambra on the team outscored me in healing by a factor of three.

In the competitive mode, I found myself lacking in the healing department. At one point I was huddled up with a mortally wounded Montana with no enemies around, impotently adding tiny ticks back to his health bar before he got frustrated and left. Later on down her Helix, Alani can generate Osmosis stacks without scoring hits, so it isn’t as much of a problem, but early in a match she is much more fighter than healer.

Her ability Riptide is fantastic for area control, especially after powering it up. She can dominate narrow corridors with it, keeping enemies back and optionally healing allies or slowing enemies later on. For a full-heal build, standing in Riptide can fill up Osmosis, allowing Alani to have her powerful Wellspring available constantly.

The other ability Geyser is much more difficult to use. It covers a smaller area and takes about a second before it goes off. If it hits, it can be an easy kill for the team if others are paying attention, since it locks the target up for a short period. The trouble is in getting it to hit; it requires either a slow target or some keen movement prediction and timing. Nailing an enemy player with it is satisfying, but I found it too difficult to rely on.

Alani’s ultimate ability Emergence is similar to Oscar Mike’s or Ambra’s, where it targets a large area and after a short wait deals significant damage to anything inside. Powered up to Level 10, it could be great for capturing an area, since it would clear out or kill any enemies and then provide a safe spot for area healing for teammates. Even without the Level 10 upgrade (no healing), it’s nice.

Perhaps the most interesting thing about Alani is she can spec into a role that neglects healing in favor of combat. I haven’t tried it (because that’s not how I roll), but she can instead upgrade her primary attack and her movement through Riptide at the cost of team support. She doesn’t dish out damage like an ISIC or a Montana, but her combat power is surprisingly high for a healer.

As a character, I’m lukewarm on her. She isn’t as insane (read: obnoxious) as Orendi, but she has some nonsequitur lines that are more puzzling than entertaining. She has a warrior-monk thing going for her, but then on top of that a sort of clueless teen outlook. She does make a few water puns, so it’s not all bad.

Overall, Alani is fun to use, but there are definitely some situations that call for technical and/or risky maneuvers in order to maximize her efficiency. In the heat of battle, it’s sometimes difficult to juggle dealing damage to enemies for Osmosis and healing allies with it, where simple healers need only worry about the latter.